The French actress on playing marginalized characters, her industry parents and her career-defining performance in Sister. 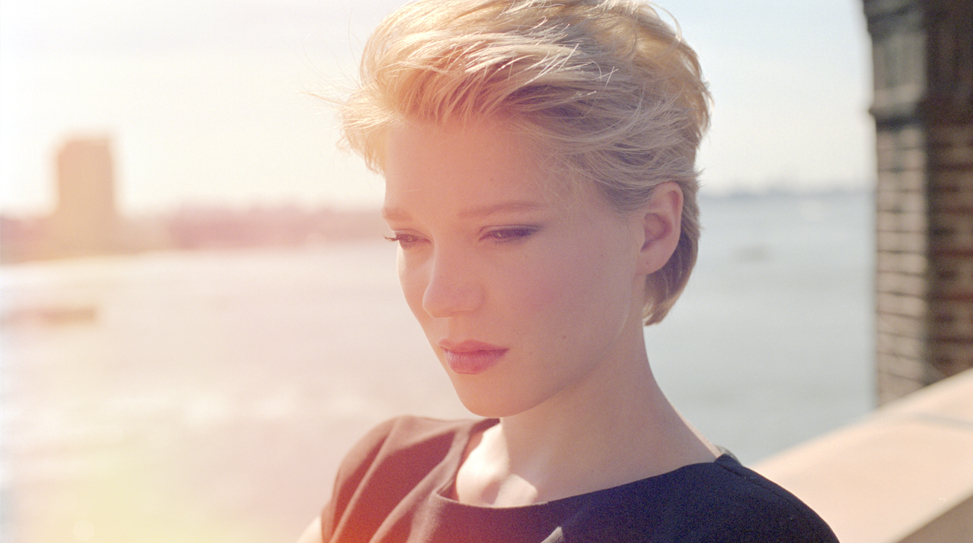 My parents aren't fans of my work.

Léa Seydoux, an enormously talented French actress, happens to be the granddaughter of Jérôme Seydoux (chairman of Pathé) and the grandniece of Nicolas Seydoux (chairman and CEO of Gaumont). Preconceptions are expected when you have such strong ties to the film industry, but this one is the real deal. For Léa, who made her acting debut in Christophe Honoré’s La belle personne, it’s all about the acting. Perhaps best known to us as the diamond-hungry villainess in Mission Impossible: Ghost Protocol where she played opposite Tom Cruise, the 27-year-old is taking her career to new heights after giving an impressive performance in Ursula Meier’s Sister.

In Sister, Simon (Kacey Mottet Klein) lives with his older sister (Seydoux) in a housing complex near a luxury Swiss ski resort. With his sister drifting in and out of jobs, not to mention a key relationship, Simon quickly takes on the responsibility of providing for the family. Every day, he takes the lift up to an opulent ski resort to steal equipment from rich tourists to resell them to local kids down in the valley. He’s able to keep their little family afloat with his small-time hustles, but it’s when Simon partners with a crooked seasonal worker that he begins to lose track of of his boundaries and plummets into dangerous territory, which affects his relationship with his sister.

Sister is now playing in select theaters in New York.

Sister is remarkable. How did you get involved with this project?

My agent told me about it because he was a big fan of Ursula [Meier]. He told me that Ursula was looking for this young foreign actress for her new movie. I read the script and loved it! I was actually familiar with Ursula’s work because I had auditioned for her first film. With Sister, I really liked how these two characters lived in a tower in the middle of nowhere. The atmosphere’s very poetic. I was concerned about how my character would raise this child in the movie. I think she’s too harsh on Simon at times. It was difficult for me, at first, that my character was unlikable. I had to find something in her that would help me embody that character with a certain kind of humanity. I defend her actions. When I interpret characters, I want to save them in a way.

That’s what I want to do. But for this particular character, it was quite hard to do because she’s very wild and irresponsible at times. It was only after speaking to Ursula about the character’s background that I realized how she’s actually the kid in the relationship at the center of this story. Once that became clear to me, I could get into her skin.

This film rings so true to me. My sister basically raised me because my parents were physically absent during my adolescence.

It’s the same for me! My mother is the child in the family. [Laughs] This movie focuses on marginalized characters.

Do you see this particular character reflected in the people you know from your personal life?

Of course. And we’re just not from the same world, socially speaking. I watched some documentaries about young mothers while preparing for this movie. My mother had kids when she was very young. I feel very far from this character, but at the same time, I like to play poor people because they’re more—I’m obsessed with this word—poetic. That’s what I look for in my own life. When I was young, I was convinced that I would become a tramp because I felt so different from all the other kids. I thought that, maybe, I wasn’t made for this kind of world. I grew up thinking, “How could I possibly survive in this world?”

At what point did acting come into the picture?

That’s a mystery to me because I don’t really know even now it all happened. [Laughs] As a teenager, I was really lost. When I turned 18 or 19, I met some actors. I remember one of my friends being obsessed with cinema and she really wanted to become an actress. At that point, I met this actor and I found his life absolutely fascinating. I always had a free spirit and I think that drew me to acting. I think that pulled me towards that kind of freeness. Tell me if I don’t make sense and correct my grammar…

It’s very difficult to process something like that. When I told some of my friends that I wanted to act, they laughed at me. And when I decided to become an actress, I was so focused on that goal. I think I always wanted to tell stories.

Do you remember your first gig?

I do! I remember that it was difficult. I was so shy and I’m still shy. The first job was on a TV series. It was a one day shoot for a very small part. I remember that morning because I waited ten hours before it was my turn to do anything. I had this little scene and it intimidated me whenever the camera was so close to my face. It was for this very bad TV show. [Laughs]

At this current point in your career, what else is left to explore?

For me, the most important thing is the directors that I work with and it’s their subjectivity that I care about over any given material. I want to work with people that have the kind of strong opinions that I like.

How did Mission Impossible: Ghost Protocol come about? I think a lot people in the States recognize you from that one.

I have an American agent and she asked me if I wanted to do it. It just happens like that, you know? It’s a strange process. I think they were in a rush and they needed someone fast. They were looking for a foreign actor. It was my chance and I took it! [Laughs] I didn’t even know anything about the story or the character that I would be playing. They told me, “It’s a small part, but you have a big scene with Tom Cruise.” It was very physical. You have to have a lot of humor in this industry, you know? This business can get quite silly. There’s nothing serious about doing a Mission Impossible movie and I prefer to play deep characters. At the same time, I would love to do comedies.

I love the opening scene with Josh [Holloway] in Ghost Protocol. That image of you was quite striking.

I remember everyone laughing at me while I was doing that scene. [Laughs.] The camera was just in so close and I was making this really unnatural pulling out of the gun move for multiple takes.

What has surprised you up until this point in your career?

Everything. I wanted to pursue acting at a certain point, but I didn’t really know how hard it was going to be. When I decided to act—I wasn’t that young because I was 18 or 19 years old—I thought that I was destined for it. I was just auditioning all the time and it was like that for a long time. When my agent called me and said that Ridley Scott is looking for a French girl to play a queen in Robinhood, I was like, “Okay.” [Laughs] It was just so unexpected… I have family in the business, but they didn’t raise me to become an actress.

Do you feel angry about that?

Not at all. I don’t take it personally. We’re all very independent and it was my personal decision to go into acting. My parents aren’t fans of my work.