The Belgian actor on his breakout role in Bullhead and Rust and Bone. 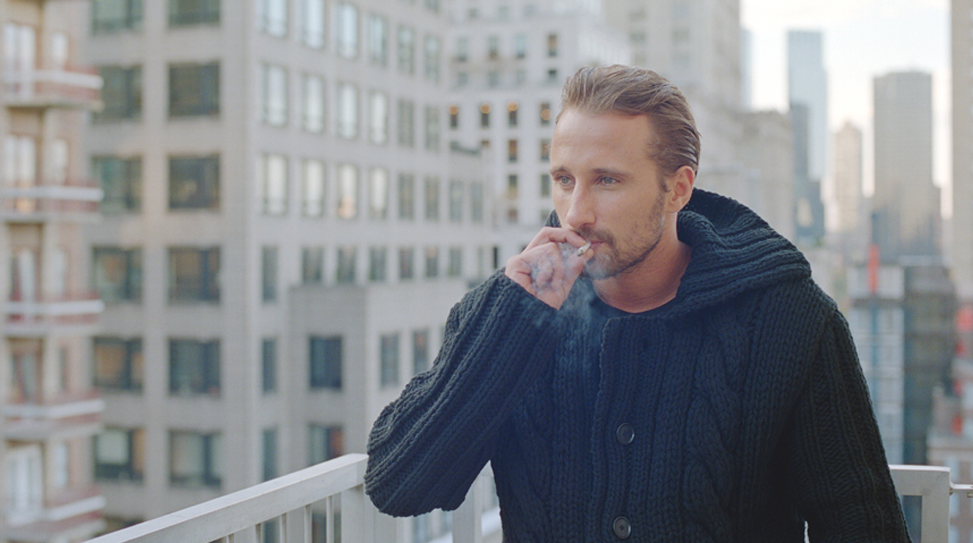 It was hard to create a guy that you can hate and love for the same reasons. It's the kind of messed up person that's so damn honest and sincere as fuck.

Rust and Bone is now playing in select theaters.

I first saw you in My Queen Karo at the Tribeca Film Festival in 2009. You looked very different then.

What was that physical transformation like on a personal level?

When I’m doing something like that, I’m not thinking about it. It’s only once a project is over that you go, “Oh, shit. That was intense.” When you have a goal like that, you get obsessed with it and do whatever it takes to attain that goal.

Well, I don’t have it anymore. I lost that physique after Bullhead. For Rust and Bone, Jacques [Audiard] wanted me to grow a belly and get stronger. If you compare my body in Bullhead with that of Rust and Bone, it’s kind of different. In Bullhead, you see this artificially built muscle mass and in Rust and Bone, you see a guy who seems naturally built. He doesn’t look fit and a bit unhealthy. He eats out of garbage cans and doesn’t have the means to eat properly. I’m not scared of being typecast at all.

What was the most challenging thing about shooting Rust and Bone whether it was during the prep or the shoot?

I think the most challenging thing was finding the right balance in the character and make him, not necessarily likable, but tender and touching. It was hard to create a guy that you can hate and love for the same reasons. It’s the kind of messed up person that’s so damn honest and sincere as fuck. That duality and ambiguity was something that I wanted to strike. I was always trying to stay on that line because he could get very perverted and vulgar if you’re not careful. I was trying to stay right on the verge and that was the challenge.

And how did you accomplish that?

It was something that I worked on with Jacques and we were constantly aware of it on set. We were pushing each other back and forth all the time.

Did you get some time to get to know Marion [Cotillard] prior to the shoot?

Not at all. We had one reading and after that, we met on set and went into it straightaway.

What was that first encounter like when you started shooting?

I knew she was so ready right from the beginning. Let’s go! [Laughs] She’s very generous and professional, not to mention extremely talented.

How was your experience working with Jacques who’s so well-regarded in the film world?

I was extremely excited to work with him. I did two castings before meeting him and when I met him on the first day, I was really scared. I was intimidated because I had so much respect for him. I didn’t feel free because I wanted to make the right impression. That was a weird day… We had another day like that lasted a lot longer. We had a lot of fun working together after that. It just became one big party, not party in the sense that it was easy because nothing with him is easy. He’s very good with actors. He gives you a lot of freedom, not because he doesn’t know what he wants, but because he knows the actors have to bring something to life. When you give him something, he gives something back in return. He sends you all over the place—up, down, left and right—until he finds something that seems true.

Could you talk about your working experience with Jacques in relation to working with Michael [Roskam] who directed Bullhead, a longtime collaborator of yours?

On set, I had the same relationship with Jacques that I had with Michael on a personal level. Jacques is obviously older and has more experience in film—he has a different temperament, but I felt the same kind of devotion and exchange with both of them.

The kid who plays your child in the movie is great. What is it like to work with someone so young? Is your process any different?

There’s definitely a difference, but you just feel things in the moment. I don’t know what the difference is… A kid, especially that kid, is so unaware and he’s not self-conscious like an actor is. It’s disarming. It’s the greatest lesson for any actor.

Did you have a chance to bond before shooting?

Do you know how they found him?

In the streets! They found him in a French ghetto. He comes from a rough background with a sad story.

Jacques was roaming the streets looking for a non-professional child actor?

He held a lot of normal auditions. Parents would bring their kids in because they wanted their kid to be an actor. Terrible stuff… [Laughs] The casting agent found this little fellow in the street and Jacques fell in love with him right away. The casting agent started testing him out and told Jacques, “I know what you’re thinking, but don’t take him because it’s going to be hell. The kid is a little nuts.” Jacques said, “He’s the one.”

You know when you know.

You know when you know. You feel it.

What kind of roles are they offering in Hollywood right now? It can get so image-based.

Luckily, there’s also an enormous independent scene over here. I’ve been offered a lot of different things and not really anything in that range with the physique.

I understand that you’re father was an actor. Did he encourage you to take it up as well?

No, not at all. We never even talked about it. [Laughs] When I started at the Academy [of Dramatic Arts in Antwerp], he was somewhere else. He had quit acting years before that and he was in a totally different zone.

What was your perception of this profession and the industry growing up when your father was acting?

I didn’t have a perception back then. I didn’t care. I think I was too young because I was just a teenager. I wasn’t thinking about that… My father wasn’t really a film actor. He did a couple of films, but he was more involved in theater. Of course, I went to see a lot of his performances and spent a lot of time in the theater with him. I took in the atmosphere. There was something very intriguing and poetic. I don’t want to say mysterious, but it was to a certain extent because that’s the kind of actor he was. He was a true artist.

Do you think you’re attracted to a certain kind of material?

I’m attracted to people with flaws. I like people that are imperfect—the anti-heroes. I don’t believe in heroes. I think people can do heroic stuff, but I don’t think people are heroes. I like ambiguous characters that you can hate at the same time, mostly for the same reason you like them.

I haven’t seen all of the films you’ve been in, but you have a hyper-masculine presence in your recent roles. What’s your perception of masculinity?

I don’t have a particular notion of masculinity. I don’t know if that’s an answer… I’ve certainly done a lot of other stuff before this that never made it overseas. At the same time, if you look at these characters, they’re very vulnerable. If you look at Ali in Rust and Bone or Jacky from Bullhead, these characters are extremely vulnerable. It’s because they’re vulnerable that they’re so dangerous and brutal.

We shot that a year before Rust and Bone.

What was it like to reprise a character and shoot it in a different context?

The idea of going to the States with the director I shot the original film with and the DP that shot Bullhead felt like an adventure. I went into it like I never did it before. I just made choices that felt right to me and didn’t relate to what I did before. I didn’t make certain kinds of choices based on what I had done before in the first one. If the choices I made are similar, it’s because it felt right. At the same time, I was aware that I’m four years older and have more experience. Also, since I did it before, I had a certain kind of confidence going in.

That sounds like an interesting exercise that not a lot of actors are afforded.

It’s true. It was an interesting exercise. It’s fun doing the same scenes with different co-stars in a different setting. There’s something weird about it.

I did something when I was a small kid, but I don’t remember what it was exactly. It was with these jelly, long fish that looks like a snake… I remember it because of that fish.

And you were afraid of it?

I don’t know how I felt about it. [Laughs] I was like five or six years old.

I’ve been telling everyone that you’re going to have the same kind of crossover success that Michael Fassbender had. What are your feelings on something like that happening?

Oh, wow… I just go one step at a time. I’m just looking at it project to project and that’s it. I don’t want to strategize anything. I’ll let other people strategize whatever they want to strategize. I’m only looking at the next project and that’s the only thing I care about. That’s what actors do. We act and feel passionate about something. That’s the only thing that matters to me. I’m aware of my career trajectory, but I can only see what’s in front of me at any given time. If I get a project, that’s where my attention goes. I only want to occupy my mind on one project at a time.

What do you do on your downtime?

I paint. I play a lot of sports.

What kind of stuff do you paint?

I do murals and paint on canvases. I used to do graffiti. I’m still doing things that relate a little bit to that. It’s meditation for me.

Are you looking for anything in particular these days?

I’m looking for good stories. I would rather not talk about it. It’s a secret… You just have to let it happen. Don’t ever say it.