The Brazilian actor on healing the world with art, nurturing togetherness, and his daring portrayal of desperation in 7 Prisoners. 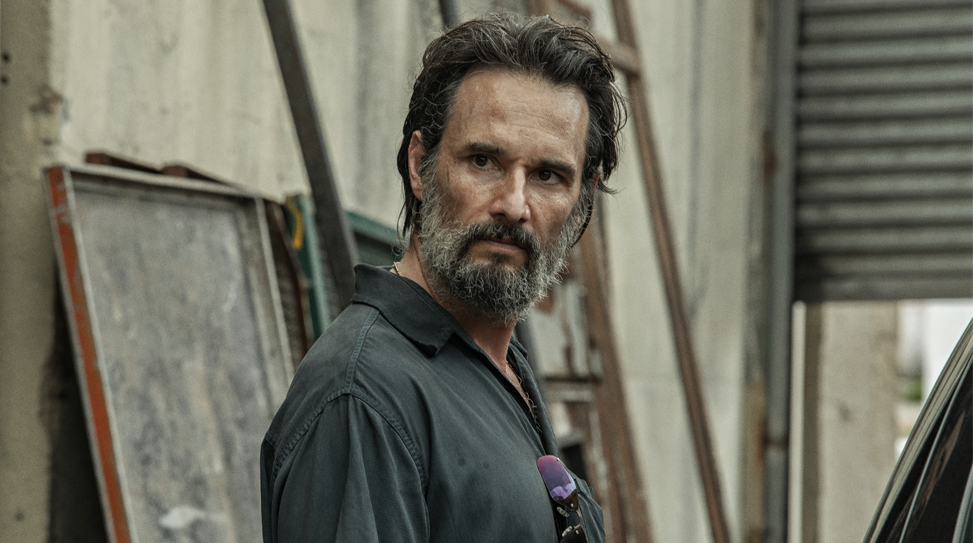 Art is fundamental to the process of human formation. It’s who we are. It’s how we understand.

Contrary to what its title might imply, Alexandre Moratto’s sophomore feature, 7 Prisoners, doesn’t unspool in the way of jailbreaks or correctional facilities—it is a social realist drama concerning modern-day slavery in Brazil. Mateus (Christian Malheiros) is a young man from the deep inland farm country of Catanduva who, without any avenues for education, is lured to São Paulo with the promise of steady, menial and well-remunerated work—or enough to make a real difference to his family’s quality of life back home. But after excitedly taking a five-hour car ride with three other young male workers—soon to be joined by three more just like them, making the seven of the title—an unsettling picture starts to form. The boys find themselves locked in a Spartan barracks, left with no wages, afterthought meals, and a debilitating work schedule. Overseen by their tyrannical boss, Luca (Rodrigo Santoro), the derelict junkyard is more like a prison where young men are forced to toil until they’ve paid back the debt they’ve already incurred for travel and accommodations—a losing game by design—or risk retribution, not only for themselves but also for their families. Astute as he is and knowing how to play the angles, Mateus looks for ways to curry favor with Luca, but this natural leader will have tough choices to make.

As Luca, Santoro turns in a compelling performance as the cruel, unforgiving puppeteer of this wicked con—disheveled and stripped of his movie-star allure. Luca’s methods are indeed insidious: By giving Mateus his confidence, he seduces the protege into doing things he wouldn’t normally dream of. But Luca is also clearly a product of his own environment—a man who was given a crappy hand in life himself. Despite his brash bravado and bullish behavior, he is a pawn in this game, a middleman in a larger pyramid of exploitation. He was likely once just like Mateus, yet has risen to his current standing by cannibalizing his own. It’s a dog-eat-dog world, after all.

Anthem recently connected with Santoro to discuss his starring role in 7 Prisoners, which took home the prize for Best Film in a Foreign Language at the 2021 Venice International Film Festival.

I often ask actors if they liked the characters they portrayed, but Luca is a great example of somebody who’s difficult to judge. His situation is so complicated, and he’s not a villain in the traditional sense. There’s no good or bad with him. He’s a product of his environment.

I do wonder, though, if you had a hard time with him.

It was painful. It was very hard for many reasons. Firstly because an artist’s instrument is the body, voice and emotions. I was lending myself to play this character. On some heavy days on set, I’m doing terrible things. As much as I could “turn off” my mind, it was hard to deal with him. My daughter was 2 at the time. I would come back home after having a hard day on set and she would open the door for me: “Hey, daddy!” And I’m like, “I’ll be back in a second. Let me take a shower.” I felt dirty. And I would question myself so much because I grew up in a middle-class family. I was privileged in that way and, all of a sudden, I’m playing a part that says I came from the slums. He was coming from misery. I usually research a lot. I love the process of researching because it’s where I experiment with myself and learn so much about life, about other people—about the complexity of being human. Part of the process of researching is like coming to a place where I’m neutral, where I try to suspend my own judgements and my own stereotypical visions of things. I’m trying to get closer. It’s like what they say: You have to walk in someone else’s shoes to understand who they are. In a way, that’s what I tried to do. I talked to people that were in that situation before. And that wasn’t me. Somehow, I delved into that on a daily basis so it was unavoidable to be constantly questioning myself. And feeling bad for many reasons. These people are so vulnerable, especially in Brazil. I’m from Brazil. I live in a place where social inequities are very profound. Poverty is one of our biggest problems, if not the biggest problem. I mean, what we call modern-day enslavement is the consequence of this place of vulnerability. These people have nothing. So what do you do? It’s like, “We have to survive. Look at my mom. Look at my family. I gotta go and do something.” When you’re desperate like that, you end up a victim. It’s one of the traps you end up in. It’s a topic for debate and deep conversation. I was in the middle of all that so it was painful. But it was an important learning experience. It was a journey. Looking back now, I learned a lot. But during the shoot, I was very in conflict. I was very moved.

It is a plunge into darkness. I’ve since come to learn that the UN estimates 40 million people live that reality today. It’s global. And the movie is about a multitude of things—generational poverty, unchecked corruption, complicity—with no easy answers. Let me cut to the chase and ask you the big question: Do you think cinema can change the world?

Let’s put it like this: In a world full of social inequalities like you just described, that must be faced by us. We have to deal with the implications of living in a society. I think the pandemic now assured us how interdependent we are to each other—how we need each other. We can’t be in our own bubbles because that’s a dead end. We need to learn and make a pact for civility and live in the same place. I think art, in general, helps us to understand who we are. We see the reflection of the phenomena of life, of human beings, in it. It helps us to signify the present: “Oh, that’s where we live. That’s what we’re going through.” And we can project and conceive the possibilities for the future. So it is like a mirror. You know, people have this image of entertainment—that culture and art is just entertainment. It does have a much broader meaning, because art is fundamental to the process of human formation. It’s who we are. It’s how we understand. Also, it is through the arts that we start to look and see “the other.” It’s when you see a movie that you go, “I don’t know that situation or know anybody in that situation, but it is a human being who deserves and has the right to live with dignity. This doesn’t feel right, so what can we do about it?” And even if you don’t do something huge, if you do a little something in your day with the people around you, you’re already doing something. That’s how change starts. It’s not a romantic saying—it’s real! The world needs change. We’re responsible for that. How we’re gonna do it is the real question. And how much can you do, can I do? It’s about all of us, each of us, even if you can do a little something just with your partner, your son, your father or friends, or if you’re gonna go out and become an activist and speak in public—whatever your comfort level is or how you feel about it. I think art helps us. My work puts me in constant practice of listening and exchange. My interest has always been about dialogue. Film, literature, music, painting—it all generates debate and talk and makes you think because, somehow, it gets to you. It touches you somehow, some people more than others. It seems to me that we’re getting further and further away from each other. We need to find a way to reconnect. Otherwise, it’s gonna be hard to get anywhere like that.

You have a background in journalism, don’t you, Rodrigo?

I wonder if an urgent movie such as this is inherently more attractive for that reason alone. It goes beyond storytelling and speaks to real world issues. It is reportage in its own way and certainly creates dialogue like you’re talking about. It holds a mirror up to us all.

Yes, very much. You nailed it. The answer is absolutely yes. My first feature film is called Brainstorm. I would love to recommend it to you, if you can find it. It’s basically about a teenager who goes to a mental institution. It’s based on a true story, and that’s where I come from. I started out making films that are realistic and social subject matter-driven so that excites me. That’s one of the reasons that, when I read [7 Prisoners], I was like, “Wow! Let me research this.” Then I saw this, this and that, and I’m like, “Woah. It’s violent. It’s about human rights. This is huge.” And it’s about the consequence of this social inequality that’s historical and entrenched in the history of my country—and many countries around the world. So definitely. It was very appealing to me.