The actress-cum-activist on working with Diego Luna, the legacy of Dolores Huerta and her new film Cesar Chavez. 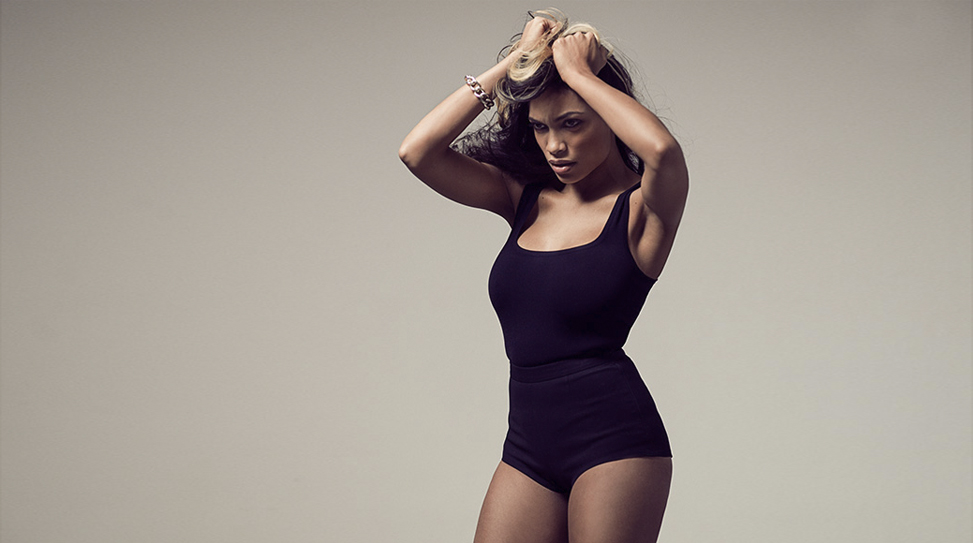 It comes at a very dear price. If you're not paying for it, someone else is.

It should have been made 40 years ago, but Diego Luna’s second feature Cesar Chavez about the Mexican-American leader who spearheaded the fight for farmworkers’ rights couldn’t be more timely. It arrives just as the clout of unions is crumbling, and it roots itself in the dynamic nuts-and-bolts tactics Chavez built on a movement with people who had no power. In the title role, Michael Peña has a no-nonsense fire. He captures how Chavez borrowed from Martin Luther King Jr., but also fueled the struggle with his own improvisatory brilliance. Keeping a strike going for years, he triumphed by fusing empathy and strategy. In the film, Rosario Dawson plays Dolores Huerta, Chavez’s co-founder of the United Farm Workers union in the 1960s.

Having made her on-screen debut at 15 after being discovered on the street for Larry Clark and Harmony Korine’s Kids—the film was a lightning rod for debate in the mid-1990s because of its frank depictions of teenagers—the 34-year-old Dawson has continued to forge an admirably autonomous path, largely eschewing celebrity in the beginning of her career with acclaimed indies like Light It Up, Sidewalks of New York, 25th Hour and Shattered Glass. Even now, with a long list of blockbusters behind her, the native New Yorker maintains a healthy outlook on her career and how it fits in with her life’s fierce passion: Activism.

You’ve been in some contentious roles lately. Do you enjoy being contentious?

Yeah, as per usual. It’s interesting because a lot of these films were shot over the course of years. We did Gimme Shelter in 2011 and then we shot Cesar Chavez in 2012. As it goes, they’re just all coming out at the same time. Sin City: A Dame to Kill For is coming out in August. I think I have a tendency to gravitate towards stories like that, particularly involving very strong women in different matters. It doesn’t mean because a character is a drug addict she’s not strong. She can still be very forthright and intensely related to the people around her on-screen. I like playing women who make their presence known. It’s also really fun to play the sick, soft, nervous, and anxious. I find vulnerable much more difficult to play.

What challenges did you face in playing Dolores Huerta?

There were multiple things that I found really hard. When you’re playing a real person who’s still alive, who you’re talking to, who you want to honor and celebrate—

So you’ve been in contact with Dolores throughout the production.

Oh yeah. And I had met her before for Voto Latino. Since then, I’ve helped her with her foundation. It’s really awesome. Then there’s also the reality that this is a Cesar Chavez film. She had always said that if there’s ever going to be a movie about her, she would want them to make a movie about him first. He was a reluctant hero. He wasn’t the best orator or any of these things, but his message was very clear. He was so passionately involved in getting the message across that it kind of pushed him into that position. Dolores ends up being an interesting partner with Cesar. She’s very forthright and in your face. She has no problem jumping into a meeting, having had no prior experience writing a contract. She’s just like, “I’m going in!” I think they really balanced each other out. I think having women play such a huge part in the movement allowed it to stay non-violent. I really credit Diego for making a film that shows how many people were part of it, especially those women. Dolores has been recognized so often, but we really don’t see what Helen Chavez [played by America Ferrera] contributed, and it’s very important what she did.

Are you still in touch with Dolores?

I just got an email from her daughter because we saw her at South by Southwest. Dolores came out to the screening and we went dancing at the after party. I danced with her whole family. She has 11 children, all remarkable young people. She has four generations down now. I went to see her in Bakersfield and she drove me around. She’s amazing! That was a big, scary aspect to doing this film because I just love her so much. I wanted everything to be right. This movie encapsulates 10 years of a movement in an hour and a half. I think we barely skimmed the surface of what Dolores contributed to us over the years, but I think it’s impossible to do that with something like this. She’s still writing it. She’s out on the front lines. We’re going to have summits for Voto Latino and she’s going to show up for the whole week.

How did she react upon seeing the film?

I was nerve-wrecked. I kept trying to figure out if she had seen it so I could get her impression. I need to know if she’s seen it. [Laughs] She didn’t even call me and she Tweeted me. She was part of a movement that went viral before we used that kind of lingo. She congratulated me and told me she loved it. That was so awesome! I was even anxious when the film was announced and what her reaction would be to that. She had read the script and Dolores is savvy. I would call her up and be like, “I’m pregnant right now and I got my belly showing.” She would tell me, “I never showed it. I had 11 children and I never showed it. People never knew I was with a baby at the marches.” Every little detail made me nervous.

Did your close ties influence the casting decision?

I have no idea on their side of things. I know they did search high and wide. Michael Peña was high on Diego’s list early on, but they still considered a lot of people. I think America was already a part of it when they first started. Diego just met with me to see if I would be interested in playing this role. He actually thought I was the one interviewing him because I knew her. [Laughs] I would ask him, “So, why do you want to make this film?” I really did. He offered me the part and Dolores gave me her blessing. It’s a really important story that’s not been told. We’ve seen it in documentary form, but we haven’t seen it this way. It’s a big deal that the Chavez family relinquished the rights to make it. Cesar was asked during his lifetime if he would approve of a movie and he was always against it. He didn’t want the awards for himself. If there was an award to be had, he would have it go to the union. It’s like Activism 101 when you see this movie. It’s not about one petition or one march. It’s not just one walkout or one sit-in. It grew from Delano to all across America. It went through the White House and out to Europe, and beyond. That’s a big deal. Cesar didn’t have high education or privilege. They were making comics to deliver out to the fields because these farmworkers were illiterate. How do you teach them about their rights? Make comics. For consumers, the question became, “Do I want to accept food that this person’s child picked for me?” They look at their own child and say, “I don’t want that for my child. We’re not going to eat those grapes.” These issues are still poignant today. This is indentured servitude. People need to understand where their food comes from and why it’s the most affordable in the world. It comes at a very dear price. If you’re not paying for it, someone else is.

And John Malkovich! [Laughs] America Ferrera, too. She actually joined us at Voto Latino with the America for America campaign when we were filming. It’s amazing to have these issues cross-pollinate with different worlds that I love and live in. Another thing I really responded to was how Diego was approaching the film as a father. He said, “My son was born in America. As a Mexican man, I realized I had a Mexican-American son. I want to tell a story about his community.” His son had seen Cesar Chavez on murals and such, but had no idea who the person was. Diego was baffled that there wasn’t a movie about this man. There is a really big through-line that’s about a father and son. Diego interviewed Helen and asked her what the lowest point was in all of this. She said it was when her son Fernando left and they realized he was never coming back. That’s a big sacrifice to make, being away from your children to fight for a cause. I think it’s beautiful to see and recognize how much sacrifice was put into this struggle from everyone. It’s like, “I’m sacrificing my time with you, so I can give you a better life.”

And the sacrifice that comes with making the film as well.

Diego spent 4 years of his life on this film. When we would film down there and his kids would come visit, they would tell him how hot it is. We were shooting in 120 degree weather. Our whole connection to the film grew even more when you’re pretending to work in the fields. It’s certainly uncomfortable when water and bathrooms are not readily available, but this is what these people do for hours and hours, month after month. It’s crazy, you know?

What are you inspired to take on after this film? Do you have any stories you want to tell or perhaps direct down the line?

I wouldn’t say that I would… I’m very encouraged, if anything, to try and produce a story about Dolores. I did so much research on her and there are a lot of things we shot that didn’t make it into the final cut. I hope some of that will find its way onto the DVD extras. I really don’t think you get enough of all that she contributed. She received the Medal of Freedom while we were filming this. It would be remarkable to make a film about her where she can contribute and be creative while she’s still with us. Jimmy Kimmel was making fun of me when I told him Dolores was talking to me throughout the entire film at South by Southwest. It’s like, “Shut up.” [Laughs] It was amazing having her in my ear. She’s so incredibly lucid and on it. I told Diego he should really think about having her do a DVD commentary. This is a moment in our history that has been marginalized. We know about the Civil Rights Movement and Martin Luther King, Jr. We readily bring up Ghandi and talk about non-violent movements. This was a huge movement. An uneducated farmworker made his name and movement known around the world.