The Chilean director on depicting microaggressions on film, working with friends, and his all-too-relatable seriocomedy Tyrel. 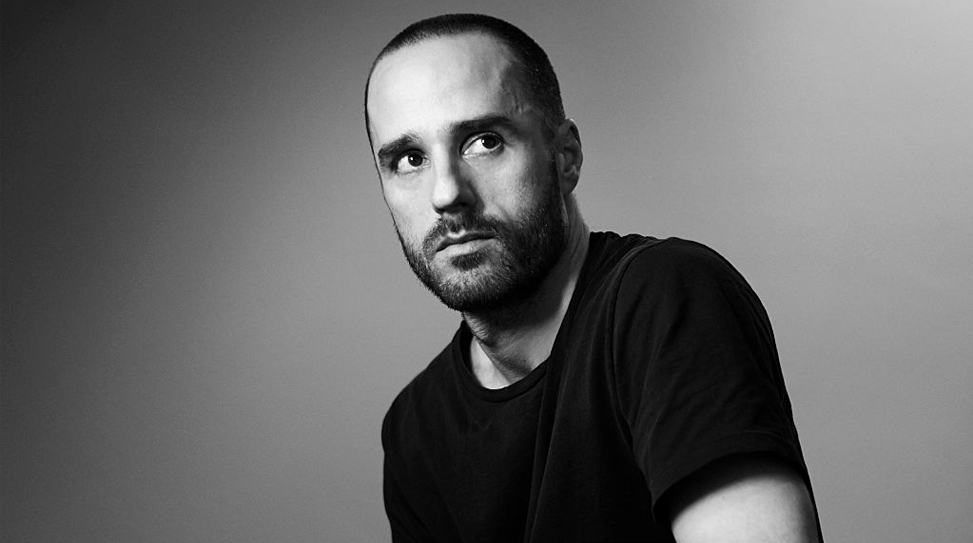 I don’t want to pontificate. It’s not my place to educate people.

A fast and lean chamber piece that was the talk of this year’s Sundance Film Festival, Tyrel is a new exercise in tension from Sebastián Silva, concerning a discomfiting social gathering that devolves into a nightmare scenario. It’s a memorable addition to the Chilean filmmaker’s catalogue, which also includes 2009’s The Maid and 2013’s Crystal Fairy & the Magical Cactus.

When his girlfriend’s family emergency overcrowds their apartment with her less than desirable relatives, thirtysomething Tyler (Jason Mitchell) accepts his friend Johnny’s (Christopher Abbott) invitation to the Catskills for the weekend. Soon, Tyler is introduced to Johnny’s cadre of all-white buddies, including birthday boy Pete (Caleb Landry Jones), who mistakenly calls him “Tyrel”—both a fleeting mistake and a nuclear microaggression. Tyler is not unaware that he’s the odd-man-out and tries to stay afloat in a deluge of unpleasantness, his passive and good-natured attitude continually running up against the pack-animal chumminess of the group. Needless to say, the weekend, which happens to coincide with Donald Trump’s inauguration, proves an exercise in control. In short order, binge-drinking leads to barbed games, including one of impersonation where they go around imitating various accents. When “black accent” is picked out of a hat, it’s yet another land mine that Tyler must negotiate, and the convivial energy turns sour. There is, however, some reprieve, like the late arrival of Michael Cera’s prankish Alan, who jokingly, deliberately brings Tyler’s lone blackness to the fore in a bid to break the ice with him. But then Alan, too, slips out of reach. In the end, this much is clear: Tyrel is smartly not only about color. It’s also about the audience being witness to human foibles that are terrifying in their universal relatability.

Anthem sat down to discuss the strangeness of human behavior as it relates to Silva’s latest effort.

As someone who moved from South Korea to a very white suburb at 8 years old, the microaggressions depicted in Tyrel were so recognizable to me. Of course, the film is also colorblind in its depiction of alienation. How did you relate to the material?

Yeah, I had a similar experience as you. I’m originally from Chile. I’ve been in America for 15 years now. I also moved to Canada when I was 19 when I was still way in the closet. So I understand the relationships in the movie. I’ve been through it. This has been the subject of a lot of my movies. Not necessarily in all of them, but there tends to be elements of alienation or grief about alienation. Tyrel is also very much about race. That’s what made it worth making.

It’s uncomfortable to see our prejudices and what we’ve been conditioned to believe up there.

For sure. It’s something I learned as the movie started being shown to audiences. There are prejudices and other things that Americans have been conditioned to sort of feel that come out when you watch the movie. Watching the movie can feel like a painful experience.

Did you intend for the movie to have catharsis at the end?

When the movie ends with the group selfie instead of some kind of revenge—or as you say, something cathartic—it’s not a disappointment, but maybe at odds with what you might expect. In the movie, they burn religious iconography and play R.E.M. super loudly. It’s cathartic for the characters. The movie really doesn’t have a high point or anything. It builds up in Tyler’s head until the very end. As a director, that was really my ambition.

It’s realistic. No one’s on their deathbed with all of their relationships resolved and intact.

Right. I truly believe that. The selfie is definitely more realistic and certainly more realistic than something like Get Out, which Tyrel has been compared to. That’s a genre movie. Of course, horror movies so often exist within the social and political contexts, too, but this is super vérité. It’s also very extreme and weighty within its own context. It’s less overt in its depiction of microaggressions in that they come unconsciously from the perpetrators. For example, when one of the guys writes “black accent” in the impersonation game, he’s truly unaware that he’s being a fool. He’s ignorant to the fact that it could potentially be very offensive. Then he tries to fix the situation immediately because he’s embarrassed and he’s bullied by his other white friends. You have another character in that scene who’s so uncomfortable with the “black accent” that he doesn’t want to play the game and feels trapped and apologizes to Tyler on everyone’s behalf. That actually makes the situation worse than what it might’ve been, too, so the movie exploits these microaggressions. Firstly, this is Tyler’s story. We see him fall into a vortex of white paranoia, alienation, confusion, and self-deprecation. Even for the other guys, it’s very confusing how they should react or approach all the things that are going on. Secondly, even though the narrative comes from Tyler’s point of view, it’s really for the audience to work out. And it’s not only for an American audience, although it’s truly what we associate with American society. It’s not only about race relations. It’s also about our social dynamics.

You’re always good at playing with ambiguity and the strangeness of human behavior, and because you write so fast and shoot so fast, it’s remarkable you come out at the other end with such complete films. Your process really works for you.

I would have to say yes to that for Tyrel. I really like making these kinds of movies, you know? It’s what I like the most. I have written more ambitious projects, which would require a completely different way of approaching them. With something like Tyrel—it’s the same with Crystal Fairy & the Magical Cactus or Nasty Baby—I’m interested in exploring moral ambiguity. I don’t want to pontificate. It’s not my place to educate people. I really don’t like it when movies do that to me either. I don’t want to make a movie that has an overt political message that aligns with my morals—that’s not what I’m looking to do. Of course, I don’t want to make a homophobic, fascist, or racist movie either. I’m looking for challenges and feelings of discomfort where solutions and answers take a moment to come into view, before you can completely hear it with some clarity. I want to be confused. That’s something I intended to do with this movie and I think it succeeds.

Can you tell me about one of those more ambitious projects?

I was betrayed by a movie star once [Will Farrell dropped out of Silva’s Captain Dad just days prior to shooting in 2015] and that’s why I haven’t made them. Basically, that one didn’t come together. There are others that are more ambitious than that, which require more time. But I’m not the kind of director who sees himself developing a movie over the course of 8, 7, 4, or even a few years. That’s just not in my character. Maybe as I grow older I’ll become more patient. Movies like Crystal Fairy & the Magical Cactus are little sketches of life—little observations. They don’t feel like something that will be important and forever thought about.

Didn’t you write Tyrel in 10 days or something crazy like that?

Yeah, and we also shot it in 11 days. But this is a subject matter that had been brewing in my mind and fueling my emotions for a long time. I live in Brooklyn. I live in America. It’s such a timely subject. For everyone involved with Tyrel—from Jason [Mitchell] to Michael [Cera] to the AD—we’re all in America sort of going through this. So it was 10 days of writing and 11 days of shooting, but also years and years of just witnessing.

Chris [Abbott] joked that, although it was helpful to live in the same house with everyone during the shoot, 3 more days would’ve been too much. When you bring your close friends together and throw them into the ring for a movie as you do, what are you hoping to achieve?

It’s completely a part of the process. It’s like inviting my friends over for dinner. You’re going to make something together and it’s like, “Okay, what do I need? I need gelatin.” I need all these things, you know? I make the offer, they accept the offer, and we make a pact. It’s kind of whatever’s close to you. From Michael, I need olive oil. [Laughs] He’s my friend, he’s an actor, and he’s the right age so why not? “Hello Michael, would you like to make a movie with me? Hey Nico [Arze], don’t you have a house upstate? How about we use it for this story?” So it’s very much the flow in the process. It was the same with Crystal Fairy & the Magical Cactus. We needed three actors so I was like, “Well, my brother [Agustín Silva] is friends with Michael.” I didn’t know Michael personally and I didn’t have to go through his people. I knew it was going to be a blessing to have him on the shoot. With someone like Gaby Hoffman, she’s like, “I would love to work with you,” and I’m like, “Come!” When you’re working on a story that you feel like you need to tell that’s written in 10 days and shooting for 11 days, you get together with friends and turn on some cameras and just start. That’s just how they kind of go. If someone wants to get involved, they’re welcomed. We come together to unite in the end.

Yes, I have very concrete goals and challenges as well. There are statements—or a lack of them intentionally—that I want to make. I want to portray ambiguity, for example. I do have solid plans, but I make sure that they’re also simple and achievable, and then I move forward. When you have people like Michael and Caleb [Landry Jones] and Jason cast in your movie, those are your best friends. You’re not going to have producers going, “No man, you have to treat them this way. They’re worth this much money. They’re going to bring this many people with them.” So you see whatever is near and who you trust. It’s always so pleasant to work with Michael—with good friends. You can ask them to stay a little longer and they’re not gonna be bitching about it. If they’re bitching about it, we’re bitching about it together and laughing about it. It’s a really relaxed, fun environment.

Michael has become your most frequent collaborator. It says a lot about your relationship.

Yes, it’s very organic. When you’re spending time with friends, it’s easy and it makes sense. If I’m with a crew of whiny guys, I’m not going to call Michael. Also, I rarely write for people that I know because I don’t like doing that. But if I write scenes that are easy and I want to make it fast inexpensively, I reach out to who is close and easy to work with. Michael moved to New York, he’s my neighbor, he’s my friend, and he’s free so let’s do it!