The television mainstay on his Staten Island roots, his upcoming feature Bad Hurt and the final season of FX’s Sons of Anarchy. 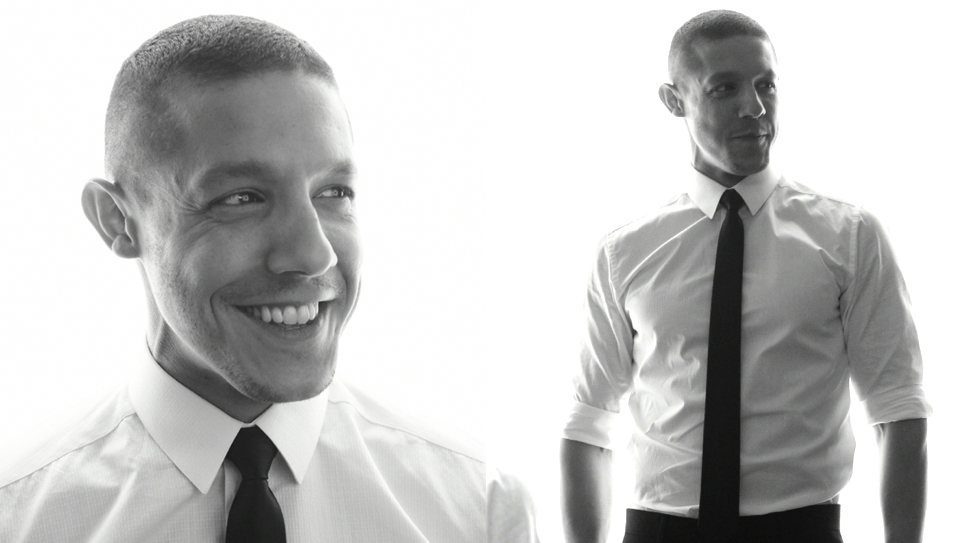 My influences growing up were the people I was around. I've never been somebody who looked up to people I didn't know personally.

Theo Rossi has a gentle way about him despite playing the action-dude type, most notably on FX’s long-running and critically acclaimed series Sons of Anarchy. Rossi channels Juan Carlos “Juice” Ortiz, the tatted up and mohawked Intelligence Officer for the Sons of Anarchy, Redwood Original (aka SAMCRO), a fictional motorcycle club and organized crime syndicate. Kurt Sutter, the show’s creator, surely took notice of the compact soft side in Rossi’s muscular, 5’11” frame early on—Rossi man cries on screen, a lot. Season six was an eventful one with “Juice” striving to get back in the good graces of SAMCRO after providing the Feds with insider information. Sons of Anarchy enters its seventh and final season this September and Rossi also wrapped production on Bad Hurt, a family drama on deck for 2014 release. Considering the 38-year-old’s humble nature and gratitude for the luck he’s had, it seems unlikely that his rising star will fizzle out in some hubristic flash. He’s just riding the wave and the rest has yet to unfold, as stories do.

Sons of Anarchy has been your longest running role on television so far. What has this journey been like for you?

Where do I even begin? [Laughs] It has been my everything. It has given me incredible opportunities for a million different things. The charities, my production company, and to my life! It has been an incredible journey that started in 2008 with me reading for multiple roles on the show and doubting I’d have the chance to be on the show. It was Kurt [Sutter] who took a shot with me. It has been an amazing journey. I feel so indebted to it all. FX is obviously this one huge family and I think it’s the greatest place to work. Kurt just so happens to be the greatest boss. It’s everything people think it is. Seven years in, we still have this feeling that we’re making an independent television show that some people happen to watch. I’m very grateful.

You started out with a recurring guest role before graduating to a starring role with season two. What did your contract look like in the beginning?

Maybe you didn’t quite know Juice’s trajectory starting out, but do you think you might have had trepidation about committing to something quite this big?

This might be a story for a different day, but I knew the pilot script was nothing like anything I had read before. I had never seen anything like this, and I had done a lot of guest star gigs at the time. I was such a tremendous fan of The Shield and Kurt when he was doing that show. Yet, nobody could’ve predicted this with Sons of Anarchy.

What does it feel like when you go back on set for each new season?

We all talk so much throughout the off-seasons, but with every new season, you realize that certain people aren’t there anymore. We lose regulars with every season and that’s always a weird transition. They’re not in their parking spots anymore… For the most part, it’s the same as it ever was. We talk about what we did during the six months that we weren’t there with whatever movies or other projects. We talk all the time, so it’s not so much about catching up. We get really excited about what Kurt comes up with. He’s so meticulous and surprising. It’s so incredible for us because we have no idea where he’s going to go.

What is it like working with a stable of different directors on a television show, as opposed to one (mostly) on feature films?

We’ve been so lucky because we have really incredible directors on the show, mostly from The Shield or other cable shows that have come onto ours. We definitely have our in-house directors like Paris Barclay and directors who shoot more than two episodes. They’re just part of the family at this point and we’re waiting for them. We’ve been using the same directors since season one, and they’re almost like guest stars that we know are coming on.

Can you give us an impression of what it’s like to grow up in Staten Island?

I actually still live in Staten Island when I’m not working in L.A. Growing up in Staten Island was the greatest thing on earth. There’s just nowhere else I want to be. I’ve been lucky enough to travel around the world, but Staten Island is my home. I will carry this city and this town around my back forever. Every single street corner and every little thing is a part of me. Growing up in New York City in general was the biggest blessing that I was afforded. It made me exactly who I am. It taught me to be more respectful. There’s a reason why New York City is the capital of the world. You’re exposed to everything. My influences growing up were the people I was around. I’ve never been somebody who looked up to people I didn’t know personally. I look up to my friends in the military and my cousins who bust their ass as cops or construction workers. These are blue-collar people making it happen every day. I always looked up to my own community.

How has your perception of acting and the industry changed over the years?

I think my perception of it has always remained the same. I look at it as a job like anything else. It’s like when you get caught up in a world that you’re not a part of, you know what I mean? I’ve had every job in the world. I was delivering newspapers when I was nine years old and laid carpets. Whatever it was, I tried to do it with the best of my ability. I look at acting as a job that I’m really lucky to have. There are some amazing benefits that come with it and my path has been really great, but I’ve always looked at it as a job. I’ve been acting for 14 years and it’s my current hustle. I have a lot of different hustles going on and this is one of many.

You just came off the set of Bad Hurt. What’s the film about and who do you play?

We just finished shooting that on Saturday. It’s my production company’s first film, two years in the making. It’s set in 1999 Staten Island. This was a tremendously creative experience working with a family, making a movie about a family. It’s about this lower middle class family’s trials and tribulations. I play a character named Todd Kendall, a son and the middle child. The world sort of revolves around Todd and he’s trying to slow it down because it’s moving so fast. We’ve partnered with Nick and Emma Koskoff. Emma was just nominated for The Wolf of Wall Street as a producer at the Academy Awards. We have the amazing Mark Kemble and his story. We had the amazing Karen Allen from Raiders of the Lost Ark and Animal House playing my mom. My dad is played by Michael Harney from True Detective and Orange Is the New Black. My buddy Johnny Whitworth plays one of my brothers. We had this young, kick-ass New York crew that’s in it for the art of it. We just had an amazing shoot and I can’t say it enough! I’m really excited for everyone to see it and we’re in post-production right now. It’ll be out sooner rather than later. And we have six to seven other projects in the works too that range from TV shows to books. We’re rolling on everything now. My company, Dos Dudes, consists of all my friends that I grew up with. Even my mom’s involved.

It sounds like a labor of love and good vibes all around.

Do you want to get behind the camera as writer/director? Is that a goal that you have?

I really love producing and my love for acting has never wavered. Between that and the nonprofit work… Not right now. [Laughs] But my mind changes every 14 seconds.

What does it feel like to have chapters of your life immortalized on film forever?

Oh man! That’s a deep question, Kee. It’s funny because I’m so not anything that I’ve ever portrayed. It’s just very cool to have a visual catalog of the journey that we’re all on. I’m just super grateful. I’m grateful to be able to make a living doing this. I’m grateful to be talking to you. I’m grateful that I get to hang out with my friends and have this business where we get to make stuff. It’s a small part of the bigger picture, and I see it as a means to an end.

What are you most looking forward to going into the final season of Sons of Anarchy?

I ask myself this all the time. I’m looking forward to not having 46 different anxiety attacks throughout the year. [Laughs] In all seriousness, I’m really looking forward to seeing how everything plays out. We’ve been doing this for seven years! No matter whose story it is, I’m such an enormous fan of this show. I watch it sort of on the outside looking in.