In Lucy Walker’s deeply moving documentary, Waste Land, renowned artist Vik Muniz journeys from his homebase in Brooklyn to Jardim Gramacho, which is known to be one of the largest open-air landfills in Latin America. During his three-year visit, Muniz labored like a monk with his eyes riveted to human disaster, creating larger-than-life portraits of […] 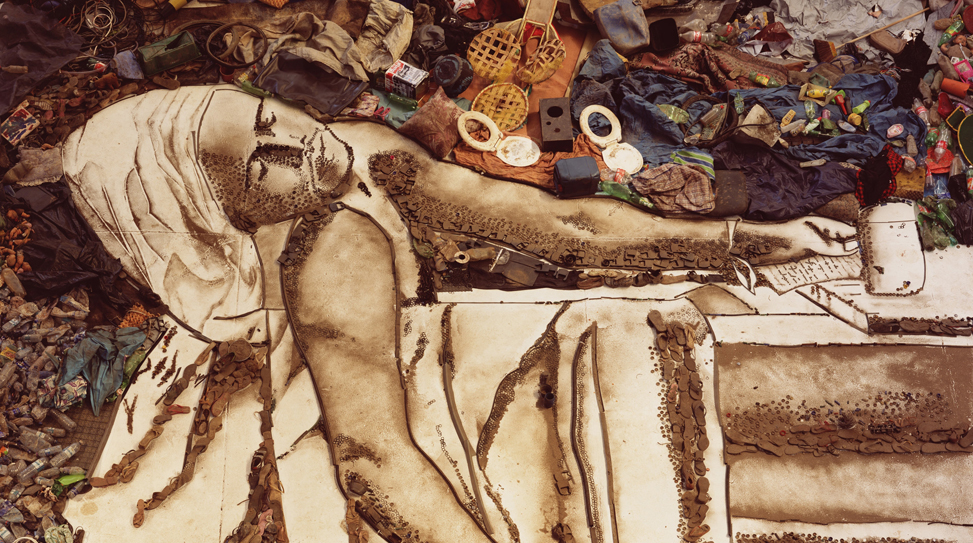 In Lucy Walker’s deeply moving documentary, Waste Land, renowned artist Vik Muniz journeys from his homebase in Brooklyn to Jardim Gramacho, which is known to be one of the largest open-air landfills in Latin America. During his three-year visit, Muniz labored like a monk with his eyes riveted to human disaster, creating larger-than-life portraits of the dump’s “castadores”—garbage pickers—using the very refuse that overwhelm their lives day in and day out. These “Pictures of Garbage” were then auctioned off and its significant proceeds given back to the pickers, which effectively changed their lives forever.

During our recent sit-down in New York, Muniz rummaged through his memories of these victims of circumstance who—despite being born into a world of extreme poverty and incalculable suffering—refuse to lament on their angst-ridden existence, and instead, expel an awe-inducing form of humanity that won’t soon be forgotten.

Waste Land opens in NY on October 29 at the Angelika Film Center with a national rollout to follow.

How did the idea for “Pictures of Garbage” come about?

I always wanted to do something in Jardim Gramacho, but didn’t know exactly what that should be. I eventually realized that making portraits would be the easiest thing to do. Actually, I think it was the only thing we could’ve done because once you’re in Gramacho, the humanity of the garbage pickers overwhelm you and we wanted to show that in some way. It’s a matter of questioning what they do and how they do it. You meet people there who live in the harshest working environment that you could ever imagine.

Did you consider other landfills?

I wanted to do something with garbage in another landfill a few years before deciding on Gramacho, but they were guarding the place with assault weapons. We figured they were dumping bodies, dealing drugs, or it was connected to some illegal operation, which we didn’t want to deal with.

Was it very difficult explaining your project to the garbage pickers?

It had to be done gradually. Working with people who have absolutely no contact with contemporary art was actually a blessing. I knew that if the project worked and it came to fruition, it would prove to me that art is real and it can have a profound effect on anyone regardless of who they are.

One of the most touching moments in the film is when the finished portraits are finally shown to the pickers. They’re reactions are so genuine. They’re all moved to tears.

That was extraordinary for them because they didn’t realize what they were doing until they finally saw the final product. You have to understand that these people aren’t used to seeing representations of themselves. It’s a novel thing to have a photograph of yourself. When they saw portraits of themselves in this huge, epic scale in the studio, something clicked. It’s not just the vanity that comes with it, but also pride and satisfaction. It really shifts your views on the concept of identity. We saw that happen over and over again with the pickers. It’s such a beautiful and powerful moment. It’s important that they did it themselves, too. They were the ones who decided which materials to use for the portraits. We set up a studio near the junkyard and worked on these portraits for three years.

Did the pickers end up going back to the landfill after the project was over?

Not all of them. Suelem [Pereira Dias] had been at Gramacho since she was 7. She’s never been to school and I’m surprised that she can read at all. Gramacho is all that she knows and picking garbage is all that she can do. It’s a sad thing because she couldn’t envision a world outside the garbage dump prior to this. Now, she’s taking care of her 3 kids at home and she hasn’t returned to the garbage. Zumbi [José Carlos da Silva Bais Lopes] has been picking garbage since he was a child as well. Tião [Sebastião Carlos dos Santos] is a different case because he was already very active and became a leader of the national movement of pickers. He’s a very smart and charismatic guy. He has done amazing things for the class of “castadores.”

In what other ways have things improved for the “castadores” as a result of this massive undertaking?

As much as the film is about the photographs, it’s also about bringing the class of “castadores” to the foreground and finding a solution to define them as a workforce as a way of turning the concept of “dumping garbage” into “recycling garbage.” It was about posing the question, “What are we going to do with this class of workers? How can we help them?” These people are specialists and they’re able to identify 14 different kinds of plastic just by pressing on them. They know how to improve the value of garbage. They know everything there is to know about recycling. They know what it means to collect white paper as opposed to color paper. Gramacho will be closing in 2012 and ACAMJG (Association of Collectors of the Metropolitan Landfill of Jardim Gramacho) is providing education and skills training to the “castadores” to help them during this transitional period. For the first time since we started this project, I talk to Tião and he sees light at the end of the tunnel. Their perspective on the world and their working environment has changed permanently. Some of them can no longer go back to Gramacho as a result of all of this.

Were you at all hesitant about exposing your creative process so fully to the world considering that the documentary was intended to map your every move?

Personally, I thought it would be an interesting experience because it’s like when athletes watch video footage of themselves to improve their performance. I was curious to see myself working from the outside. I’ve been working as an artist for over 20 years, and from time to time, you can’t help but wonder, “What is this that I’m making?” The meaning behind what you do changes as you develop a career. In the beginning, you just want to impress people and show them how good you are. When you’re young, that’s what you should be doing. You try to assert your position in the marketplace. You want to be relevant and you want to show your potential. But as time goes on, those things become less and less important.

What is your philosophy on art these days?

When you’re first starting out, you tend to listen to the people around you. Once you gain some notoriety, you start listening to the public. Listening to the public taught me that art has to be open and accessible. Art has to be interesting to all kinds of people, not just to people who study art or people who like going to museums. You can make intelligent art that’s very accessible at the same time. I think that’s the challenge that contemporary art is faced with.

You’re such a revered figure in the art world and you have accomplished so much already. In what ways did you grow as an artist with this project?

I think it helped me arrive at a degree of professional maturity in that I worked with collaborators for the first time where I’m not in total control of the art-making process. It was the first time that I brought in this foreign element—people who know nothing about art—and allowed them to mess things up. It was about getting their input and to make decisions based on their opinions. It felt like I was throwing a wrench in the machine, but it also pushed me to go and fix it. It was nice to do something that’s not so selfish. I have to admit that making art is usually a selfish endeavor. When I’m working on a drawing or making art, I’m only thinking of myself. To be able to take this little thing that I do and implement a strategy in which to ferment social change and improve people’s lives was an amazing experiment. We not only enriched the pickers lives materially, but also perceptually in the way that they look at their lives and the world. It’s not just that we managed to raise money to improve the lives of the people featured in the film, but we also helped ACAMJG take off in a big way.

You once said, “poor people need money,” in the context that art can raise awareness about something like poverty without doing much else. I think that’s a valid point to make. You, however, choose to go far beyond the actual artwork and bring about some tangible, meaningful change.

I grew up poor. I think there’s so much that you can do to raise awareness when you show your work in museums and galleries, but journalism does it so much better. Photojournalism and the news in general present facts that—as much as possible—don’t have any subjectivity or bias attached to them. I prefer things that are in their raw form. Also, there’s a myth that artists are sensible, and therefore, more of an authority on talking about politics—this is completely bogus. Most artists don’t live in the real world because they have it easy. I certainly do! [Laughs] So, to think that I could have a better opinion on social or political issues just by the virtue of being an artist is very pretentious. A policeman, a baker, or a candlestick maker probably knows more about what’s going on than I do.