The director of Sound of My Voice on Sundance, Fox Searchlight and his sophomore feature, The East, starring Ellen Page and Alexander Skarsgard. 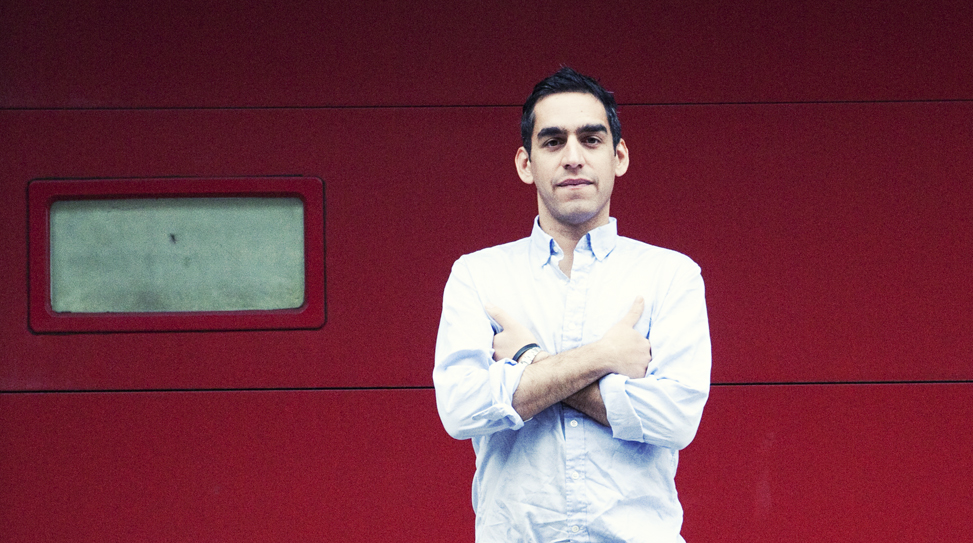 Considering Georgetown University doesn’t offer a film program, who would’ve thought that they could hatch so much creative talent in our field all at once? Zal Batmanglij, Mike Cahill and Brit Marling—good friends and collaborators—are all Georgetown alumni, and they’re very much at the forefront of the new American New Wave in cinema. The trio made a huge splash at the Sundance Film Festival last year with Another Earth (co-written by Marling and directed by Cahill) and Sound of the My Voice (co-written by Marling and directed by Batmanglij)—both purchased by Fox Searchlight, along with Sean Durkin’s Martha Marcy May Marlene, which made Lizzie Olsen an indisputable star—and for good reason. All we can say is that Fox Searchlight has impeccable taste and we fully endorse the choices they have made and continues to make.

Batmanglij’s Sound of My Voice concerns a pair of documentary filmmakers, Peter (Christopher Denham) and Lorna (Nicole Vicius), that infiltrate a cult led by a mysterious young woman, Maggie (played by Marling), who claims to have time-traveled from the year 2054. According to Maggie, she returned to the year 2011 in order to find and educate people before they face a series of catastrophic events that have made—will make— the future very different from our own.

Sound of My Voice opens in select theaters April 27.

I saw you hanging around the Bing Lounge at Sundance.

It’s funny you saw me because I was just there for 48 hours. I saw 9 movies.

Did you find something good?

I don’t remember them all, but the ones that I liked the most were Beasts of the Southern Wild, which Fox bought and I’m happy about, and a movie in the NEXT section called Compliance. That blew my mind.

I actually saw that a couple days ago.

It was very provocative and well executed. It’s so crazy that it’s based on true events because it seems so implausible that something like that could happen in real life.

I know! I thought it was really well directed. I can’t wait to see what Craig Zobel does next.

Was that his first feature?

Let’s talk about your beginnings at Georgetown University. Were you a film major there?

They actually don’t have a film major. I was studying anthropology and English. That’s where I met Mike Cahill in a philosophy class and we became best friends. We both wanted to make movies, so we took a screenwriting class together. It was taught by this cult screenwriting professor and he was very strict. We were really thrilled to be in his class. One of his students had graduated the year before we started—his name was Jonah—and he had written a script with his filmmaker brother who had, I think, made one movie prior to that. Jonah had sent the script to professor Glavin—that was his name—and he gave it to his students, including Mike and I. Mike was like, “Woah! This is revolutionary!” and I was like, “I don’t understand this thing! How will this ever become a movie?” Then the movie came out in theaters like 6 months later and we went to see it, and it blew my mind. Do you know what movie I’m talking about?

Really? Wow… And how did Brit Marling become part of your team? I think she mentioned seeing a short film at the Georgetown Film Festival that you and Mike made together.

After we saw Memento, Mike and I realized that we had to start making a short film, and we did. That won the Georgetown Film Festival and Brit saw the movie. She came up to us afterwards and asked us, “Can I work with you guys?” and we said, “Of course!”

What was it about her that won you over in that first encounter?

Have you met her yet?

I met her right here at the Crosby Hotel when she was promoting Mike’s Another Earth.

She has that certain quality. She was 17 when I met her and I was 20. She had the same quality then. I didn’t know then that she could carry a movie, but I knew that people would want to watch her. Every year since, it becomes more and more clear to me that she’s someone that you want to spend time with in a movie theater.

It was so mind blowing to see her breakout at Sundance because I went in not knowing what to expect. Everyone was going to talk about Lizzie Olsen regardless because she has that clout around her, but Brit truly came out of left field.

And she’s writing these things herself. It’s a big deal!

Where did the idea for Sound of My Voice come from?

I think we were feeling a lot of things in 2008. We sort of committed ourselves to doing this kind of work because I wanted to be a director and Brit wanted to be an actress. We taught ourselves to write in order to accomplish these goals. There was no confirmation that we could actually pull it off, so there was a lot of doubt. We were looking for meaning in our lives and we were looking for it everywhere. I think that’s what Sound of My Voice is about. I often think about “Hansel and Gretel” when I think about Sound of My Voice. I think about the trail of crumbs that they left behind. We were in a very claustrophobic time when we developed this story. Sound of My Voice is really about following the crumbs out of the forest and towards the light, or out of the basement and into the light.

What was your overall stylistic approach to the film? It’s very minimalist in terms of the color palette and production design.

The whole film is colored in what I consider “the color of tea.” It’s the different shades of tea. I think that adds to the film’s cohesiveness. Usually in film, they shift the colors for each scene to mirror the up and downs of the narrative. It will go from blues to yellows to reds or whatever, but I didn’t want to have that in my film. I was more interested in having this feeling of claustrophobia build and and this cohesiveness that you’re talking about. We accomplished that through color and limiting the size of the shots.

The film is structured in a very interesting way. It’s divided into chapters almost.

Didn’t you express interest in having Sound of My Voice become an episodic series for the web if it didn’t work as a full-length feature at a certain point?

That wasn’t prior to distribution. Our thought at the beginning was that we didn’t care where this movie played as long as we could make a movie. If it means that we release each chapter on its own on the internet, then we’re down for that. Brit always said this in interviews: “We didn’t want to wait for permission.” You know what I mean? We just wanted to make a movie.

Did Fox Searchlight buy the film very close to the premiere at Sundance?

They didn’t see the film at the festival. They bought it right after Sundance was over.

I’m becoming more and more intrigued by the way Fox Searchlight brand movies. They do such a good job as most recently exemplified by this movie, Another Earth and Martha Marcy May Marlene. How involved are you as the filmmaker?

Beautiful, right? It’s all to Fox’s credit. The people at Fox Searchlight has a lot of taste and integrity. They really wanted to do something different with this movie. Low budget movies have to be marketed and released in a different way. We had the premiere for Sound of My Voice last night at MoMA and it was so nice. Everything was small with a low-key vibe, but everything was beautifully, elegantly done.

When you work on a low-budget film, what are some of the concessions that you have to make? And what freedoms are you afforded?

I think you have more freedom than anything else. You’re just allowed to play. You obviously don’t get to stay at hotels or fly business class, but who really cares about stuff like that? Ultimately, you’re there to make a movie. When there isn’t a lot of money involved, there aren’t a lot of cooks involved, so it’s a very pure experience. I don’t know how many filmmakers have actually experienced what it’s like to make an ultra low-budget movie. I think a lot of people think low-budget means a million dollars. We had a fraction of that for this. When you’re shooting on SLRs and you have a crew of people that are there just because they love to make movies, and not because they’re getting paid, you have a very pure experience. Park Chan-Wook saw the film recently and he said to me, “Gosh! I’m going to go make a movie on an SLR. Who needs all this other stuff?” I think directors look at that with this sort of longing. Of course, I look at Chris Nolan’s 100 million dollar budget movies with a certain longing. I would like to operate at the really high budget echelon or ultra low. I think the middle is where you run into a lot of problems because you can’t necessarily get everything you want, but when you’re low budget, you can get everything you want because you can always choose to shoot real life and real life is free.

In terms of creativity, like you mentioned earlier, there are less cooks in the kitchen with low-budget. You have the creative license to do whatever you want.

Totally. You see that in Sound of My Voice. It’s so original, a lot of it. I know it’s my own movie and I shouldn’t say stuff like that, but it is.

No, you’re absolutely right. Could you compare that low-budgeted experience to The East, which is your sophomore feature with a fairly large budget? Is that wrapped now?

Yeah, we wrapped it in December. They were actually very similar experiences because we were just slaves to making a movie. I often think about filmmaking as digging something out. Brit and I pick up a shovel and start digging, and you see the shape of something under the earth. In the case of The East, we got great actors like on Sound of My Voice. On that, Patty Clarkson came and picked up the shovel. Ellen Page came and picked up the shovel. Alexander Skarsgard picked up two shovels. [Laughs.] We’re shoveling away together, meanwhile, the costume designer comes, the cinematographer comes and the production designer comes. Gosh, everyone’s just digging away. At the end, there’s this thing, this movie that exists. I found this overarching feeling on Sound of My Voice that carried over into The East.

How did The East come about?

Brit and I had written The East before we even shot Sound of My Voice. They were always sister movies for us, films that captured a certain moment in our lives.

How did Scott Free Productions get involved in breathing life into that one?

Mike Costigan, who runs Scott Free, saw Sound of My Voice at Sundance and I think it was his favorite film there. We said, “Scott Free is too established to make an anarchist film,” and he said to us, “You’d be surprised.” [Laughs.]

And you’ve been vocal that there was always a sequel planned for Sound of My Voice. Are you still plowing forward with that?

Yeah. We planned it out to be a trilogy or a TV series. There’s a lot more story to tell and we have it planned out. But it also works as a standalone movie.