The treasured Lebanese filmmaker on controversy, the Palestinian-Israeli conflict, and his latest film, The Attack. 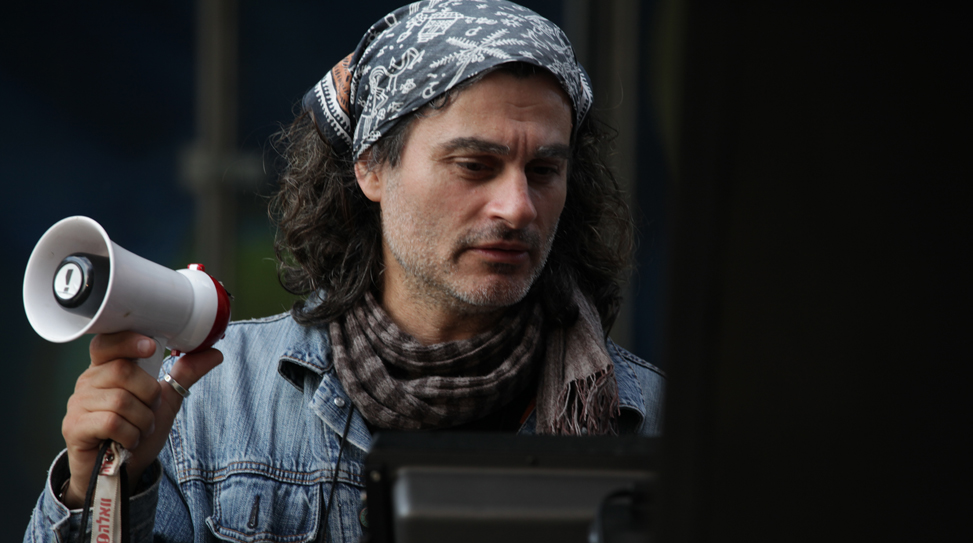 We knew we wouldn't please everyone, but who cares about that?

After leaving Lebanon during the Civil War, director Ziad Doueiri graduated with a film degree from San Diego State University. He went onto serve as the camera operator on Quentin Tarantino’s Reservoir Dogs, Pulp Fiction and Jackie Brown. (He would rather not rehash that chapter of his life, so we steered clear during our chat.) Doueiri’s first film, the critically acclaimed Cannes Film Festival selection West Beirut, put him on the map as one of the most talented directors to come out of the Middle East. Over a decade later, he’s shouting from the rooftops again with The Attack, which premiered at the Telluride Film Festival.

Adapted from Algerian writer Yasmina Khadra’s eponymous international bestselling novel, which was translated into over 40 languages, The Attack tells the pointed human story of Amin, a Palestinian-Israeli surgeon, who discovers that his wife is a suicide bomber. The film was recently banned by the Lebanese government and the Arab League. So obviously, go watch this.

The Attack opens in New York and Washington, D.C. on June 21. The film will expand to Los Angeles on June 28.

When did you first realize that you wanted to become a storyteller?

There was no particular moment revealed to me that I wanted to tell stories. It’s an organic process, very hard to pinpoint. However, the filmmaker Ron Fricke certainly contributed to this. I remember seeing Koyyanisquatsi in the early eighties. I went and bought an Elmo Super 8 camera and started to experiment with time-lapse photography. Then Fricke did Chronos, then Baraka. To me, he’s the most inspiring filmmaker. Unconsciously, I’m always trying to imitate him.

I revisited West Beirut a couple days ago and noticed that you cast your brother in the lead role. He has no other acting credits to his name. Your wife is also a frequent collaborator of yours. Does working with family affect the creative process?

Actually, no. This is pure coincidence. But I do ask for total commitment and dedication when working on a film. Family tends to support you and put up with this.

Are you attracted to controversy? Although your films tackle subject matters that are very much a part of our lives, they still tend to be quite provocative.

I honestly don’t try to do this on purpose because, otherwise, it would feel contrived. But I know my nature since childhood. My mother keeps reminding me of how I was, and still am. I always wanted to question the other side. I’m curious about the “enemy”, so to speak. To me, there are no taboo subjects. An artist can dive into anything he wishes. It’s his moral right. Let the spectator be the judge, and the only one. Not some system, establishment or government.

How faithful is The Attack to Yasmina Khadra’s novel? Did she set any parameters for you when it was decided that you would adapt it for the screen?

Yasmina, by the way, is a pen name. It’s an Algerian male writer named Mouhammad Moulessehoul. The film is pretty faithful to the spirit of the book and even most of the plot. Like any adaptation, the film takes its own direction because, otherwise, the film will probably fail if it sets out to replicate a book scene by scene. In The Attack, the major change is in the third act. In the book, the protagonist is killed accidentally by an Israeli drone missile. In our ending, he remains alive, but rejected everywhere. Yasmina wasn’t involved in any part of the adaptation. He respected our choice and left us, Joëlle Touma and I, to adapt his book.

I understand that Focus Features had bought the rights to the book before dropping the project. What was the reasoning behind their decision?

We never knew why.

How long was the journey from the time you started writing the screenplay to actually securing funding? I’d imagine that tackling a story about the Middle East, especially one that deals with terrorism, scared a lot of people.

It did scare a lot of people. It took 5 years from the writing process to actual filming. I believe the subject was a tough sell, but also, we were trying to fund a film that at the time, and still is, difficult to fund… Films about the Middle East.

This film might come across as pro-Palestinian or pro-Israeli depending on the spectator. How did you go about creating the kind of neutrality in order to focus on the characters and the love story at hand?

It was a delicate walk through a minefield. Slogans and old discourse were waiting for us at every turn. We knew we wouldn’t please everyone, but who cares about that? I don’t consider this film “neutral”. Neutrality is boring. The film takes sides with the protagonist’s quest and inner journey.

Have you received any criticism for casting Reymond Amsalem, an Israeli actress? I understand there were several Israeli actors attached to this film.

Yes. Arabic press and also a few people in the Arab and Palestinian film business hit the roof! What did you expect? Of course, when you use Israeli Jews to play Arabs, the Arabs go nuts, but Arabs never seem to mind when they are offered to play Israeli Jewish roles! It’s hypocritical, if you ask me. Don’t let me go off on this one…

I noticed that this was a joint venture between several different countries like Belgium, France, Egypt and Qatar. What’s the story behind that?

The Lebanese government had originally approved The Attack to screen in Lebanon before deciding to reverse that decision. That must have come as quite a blow to you. Did you anticipate that happening at all?

I was first very impressed when the Lebanese government approved it, not a single scene or line of dialogue cut. But then, pressure groups, like the pathetic Israel Boycott Committee, convinced another pathetic organization, the Arab League, to ask 22 Arab countries to ban the film. Nobody does a better job fucking Arabs as Arab regimes do. There are massacres and crimes and rapes going on now in the Arab world, and the Arab League can’t even agree on what to do about it. Yet, they unanimously agreed to boycott a film. Gamal Abdel Nasser couldn’t unite Arabs. I did.

Films marked by controversy and foreign films in general benefit so much from the festival circuit. How has screening the film at places like Toronto and San Sebastián helped your cause in ways that maybe you didn’t anticipate?

It actually started at Telluride. The first screening was there. Certainly, festivals like the ones mentioned give a film a push and then the film must do its own voyage. It’s unpredictable.

It sounds like your next film, Affaires étrangères, again deals with the Israeli-Palestinian conflict. Are you ever fearful that you’re being watched?

I’m not afraid of anything except my own failures. I decided to take a break from the Middle East. My producer, Jean Brehat, asked me to branch out because he told me that financing, selling, and distributing films from the Middle East is a huge pain in the ass. I agreed. I’m taking a break, at least temporarily. I have other stories to tell.