Catching up with the French mainstay about his directorial debut, improvisation, and playing against type in Maïwenn’s My King. 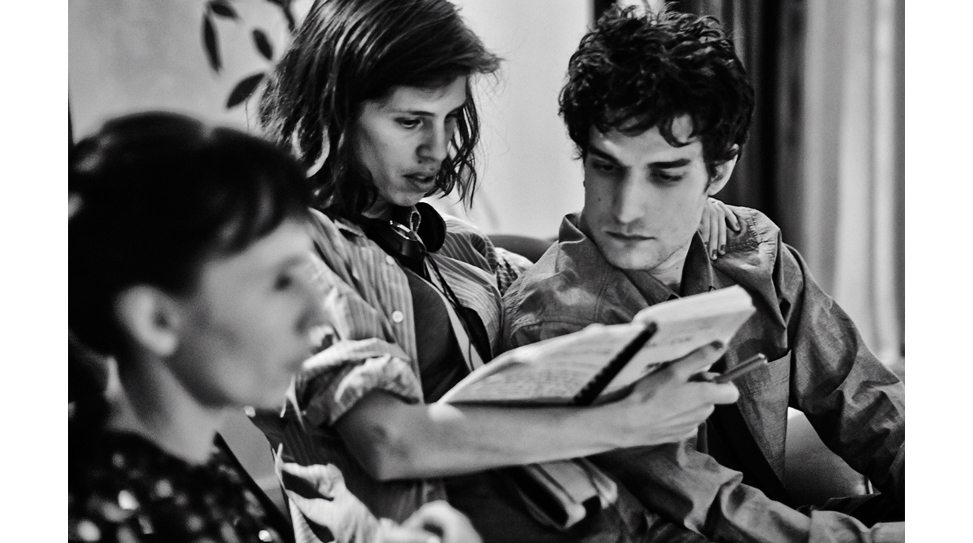 Louis Garrel on the set of My King with director Maïwenn.

A follow-up to her Cannes Jury Prize-winning film Polisse, actress-turned-helmer Maïwenn returns with her fourth feature, My King, a domestic melodrama centering on those people who try to tame and change their partner’s ways, whose very wildness attracted them in the first place.

My King starts out engagingly enough with Tony (Emmanuelle Berco) speeding down a ski slope and injuring her knee, sending her off to a convalescent center. She initially scoffs at her therapist’s psychobabble—that an injury to the knee, a joint that can only bend backwards, signifies unresolved conflict in one’s past—but it’s pretty much the foundation for everything that follows. In-between her rehabilitation exercises and shooting the shit with a lively group of young in-patient guys, we’re lassoed into a series of extended flashbacks mapping out the ups and downs of her tempestuous, decade-long relationship with Vincent Cassel’s debonair egotist Georgio. While not entirely original in the French canon, the film nevertheless showcases the work of Maïwenn’s highly watchable actors, including Louis Garrel as Tony’s deadpan brother Solal, an uncharacteristically likable role for the heartthrob who’s known for playing quite the opposite.

Garrel is also exploring new territory with Two Friends, his first feature as actor-writer-director, which world premiered at the Cannes Film Festival last year in the Critics’ Week sidebar.

My King and Two Friends played at this year’s Rendez-Vous with French Cinema in NYC.

What have you been doing, Louis? Are you enjoying New York City?

Yes, of course, but we’ve been working all afternoon. It’s blue skies. It’s very good weather. And I went to the Criterion Collection and they gave me a lot of DVDs. It’s very cool there.

For example, movies by Jean-Pierre Grumbach. It’s very hard to find these DVDs. It’s very rare. I’m not so much a cinephile, but it’s cool to find movies that you want to watch. The problem with DVDs is that, when you’re neurotic like me, you have difficulty choosing. When you have so many movies to choose from, you never want to go back to watching television. [Laughs]

At Cannes last year, you told me it was “orgasmic” to hear the audience laugh at that first screening of Two Friends. Did you have a similar experience at Rendezvous?

Not at all because I didn’t stay to watch it. I didn’t want to, and I had dinner with the distribution company for My King. I had “spies” in the theater and they told me some things, but it’s very different to feel the audience than to have someone tell you how people reacted.

For example, I didn’t want to see My King before the projection at Cannes because that festival is so intense and stressful, for me at least. If you watch the movie beforehand, you don’t have the energy to stay in the room. I also didn’t want to see it before because I wanted to discover it.

You transitioned from acting to directing. Maïwenn started out as an actress herself. Is the dynamic very different when actors work with directors who have that same background?

I’ve worked with a lot of different directors and I can see the different techniques they have. When you’re trying to find your own method in making a movie, it helps sometimes to remember how other people work, you know? It helps to remember that when you’re animating a scene. It’s a very strange job making a movie. You create the fake impression of being alone when in fact you’re in the same room with a lot of people, trying to liberate the actors from that kind of pressure.

Maïwenn is known to have a very intense energy on set. Did you find that to be true?

The thing with Maïwenn is that she asks her actors to improvise, so sometimes you’re improvising on camera for 20 minutes. Improvising every take for that long was something I had never done. For actors, that’s very challenging. Vincent Cassel and I play opposite characters in the movie. We’re in competition with each other and trying to have the last word all the time. So it was about setting the kind of tone on set to allow that to happen. Maïwenn was lovely with Vincent and me—it was like a love triangle. I really had fun acting with Vincent. We had some laughs.

So just how scripted was the film?

She wrote all the dialogue, but Vincent and I didn’t have to say it as it was written. She didn’t care about the dialogue as much as the situations. That’s how the scenes were animated.

What do you make of Solal and Tony’s brother-sister relationship? He urges her to find perspective, but she repeatedly goes back to the same old destructive relationship.

After I read the screenplay, I told Maïwenn it’s cool if she makes Solal the younger brother who cares for his sister no matter what, you know? Tony is imprisoned by Georgio because, for her, it’s a “not with you and not without you” kind of situation. In her destructive world, she needs someone like Solal. In that situation, it would be great if the little brother could be that person.

Do you think Solal might privately pass judgement on Tony as well?

Even if everybody tells you to do one thing, if love tell you to do something else, you’re going to do that something else. When I watch the movie, it’s my interpretation that Solal knows that love will conquer in the end and he doesn’t judge Tony, you know? But if he can be a little bit cruel, maybe she will find her way out. Addiction doesn’t feel like the right word, but it’s like meeting someone who treats you badly and feeling like that person treats you the way you feel you should be treated. It’s like connecting more with someone who treats you badly than someone who treats you well. In the end, it’s a kind of addiction, but the interpretation is subjective.

There are reviews that dissect the film from a feminist angle, which I know Maïwenn isn’t a huge fan of. Tony’s a lawyer who can’t seem to defend herself. Yet, this is how people are.

That makes everything even more difficult. With films about relationships, it’s so much a function of when you watch the film. In what era are you watching the film? What are the circumstances of your time? I couldn’t say that there’s one good or right, or bad or wrong, psychological interpretation. I think it’s all a question of how you project yourself onto the film.

Do you normally read reviews? Does it offer you anything?

I think it’s safe to say lot of people still remember you most from The Dreamers. What lasting memories did you take away from that Bertolucci experience?

I remember shooting the last scene on rue de Seine in Paris. When we finished filming, Bernardo said, “Cut! The dream is over…” That was quite a bizarre moment for me. The Dreamers was kind of peculiar because it was my second feature and I had also developed such an intense, close relationship with the other two actors. We wanted to be together all the time. It’s much easier and nicer to become friends with someone you work with well, rather than to work well with someone you’re already friends with in life.

Your upcoming slate of films has so much promise, especially Planetarium with Natalie Portman and From the Land of the Moon with Marion Cotillard. You’re very selective.

But we’re all selective, no? [Laughs]

I suppose that’s true, except you have the pull to actually book the roles you’re after. What about a second directorial feature? Is there anything to mine here?

I’m thinking about it, but what I’m mostly working on right now is trying to figure out what play I can see in New York. There’s a play with Michelle Williams called Blackbird that I want to see, but it’s completely sold out, unless you pay €1,200 euros on the black market.