The exciting newcomer on acting, the mercurial nature of our public personas, and Barry Jenkins’ timely and timeless Moonlight. 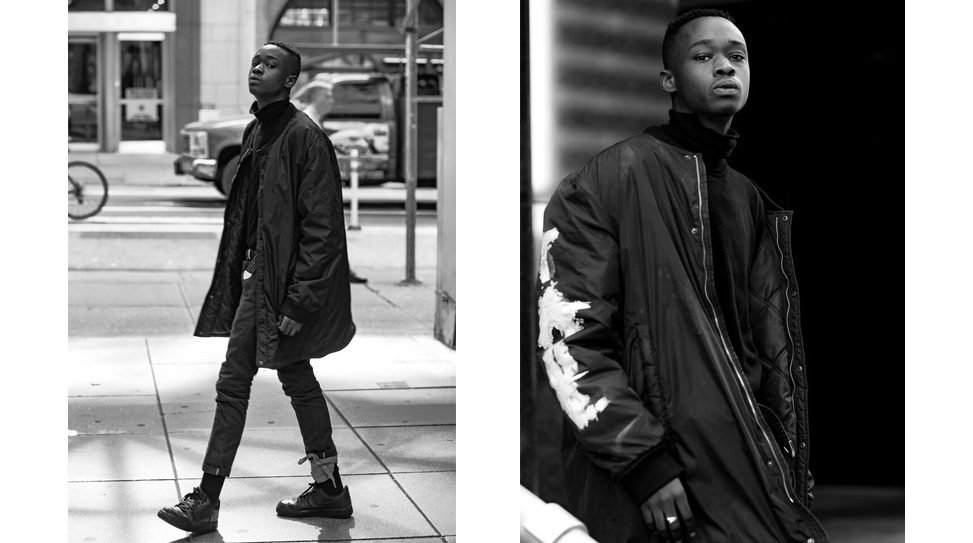 This came right on time and it was something that I needed to do. I was at a hard place in my life when I got this role.

Barry Jenkins’ mesmerizing second feature, Moonlight, is a lyrical and deeply heartfelt character study filled with rich insight about the fluid sexuality and masculinity of men in a contemporary African-American experience. An adaptation of Tarell Alvin McCraney’s play, In Moonlight Black Boys Look Blue, Jenkins paints a lived-in portrait of a South Florida youth at defining moments of his life over the course of three decades, and marked by chapters: “Little,” “Chiron,” and “Black.” Moonlight marries artistry and social inquest with a laser-like specificity. It’s one of the year’s best.

When we first meet Chiron aka “Little” (Alex R. Hibbert) at nine years old, he’s fleeing schoolyard bullies before taking refuge inside a boarded up crack den. An untrusting boy receding into himself, we’re introduced to his turbulent home life with Paula (Naomie Harris), a drug-addled single mother who violently sways with overbearing affection and cruel neglect. Continuing on this nightmare path with Ashton Sanders assuming the role of adolescent Chiron (now addressed by his real name), all semblance of a normal life has but vanished. Paula has fully succumbed to the hollow escape of drugs. Chiron’s school bullies have taken on an aggressively homophobic edge. Meanwhile, Chiron experiences a sexual awakening and falls for his womanizing childhood friend, Kevin (Jharrel Jerome). In the triptych’s finale another decade on, Chiron is nearly unrecognizable as a hulking thirty-something nicknamed “Black” (Trevante Rhodes). Long gone are his gangly teen days, but the reticent boy is visibly felt in his encounters with a rehabilitated Paula and equally changed Kevin (André Holland), both re-entering his life with hard-won emotional perceptiveness.

Did you collaborate at all with Alex R. Hibbert and Trevante Rhodes during the production to find an overarching Chiron, or was that maybe discouraged by Barry Jenkins?

We actually weren’t allowed to see each other during filming. I came in weeks after Alex had shot and Trevante filmed after me. It was very discouraged, but I think for a specific reason. It was great that we tapped into Chiron at different stepping points, while focusing on the grand scheme of the character. Barry did a great job at directing us and allowing us to build the character up. Also, things just jumped off the page when I was reading the script. It was beautifully written.

It must have been such a mind-blowing experience to see the film in its entirety.

It was crazy, man! My first time seeing it at Toronto, I was blown away. All of us have the same little mannerisms. They’re so minute and so specific. I was just like, “Damn, Barry really knew what he was doing when casting this.” We all have this individual thing that we bring to the character and it works so well. It was cool, too, because I was the first Chiron that Barry cast and the eyes are very specific to Chiron. We communicate so much with our eyes in those unspoken moments. That was dope and it was so impressive to see what each of us brought to this character.

You play a character who’s beaten down constantly, both emotionally and physically. How would you describe your overall experience in making the film? Was it very dark?

This was a very vulnerable experience for me. I was uncomfortable playing Chiron every day on set. It was fun and I was grateful to work with these people and to be surrounded by these artists, but the work that I did to get into this character came a lot from my own life experiences. I was bullied from elementary school to middle school. I actually started acting as an outlet to release a lot of emotional stress from that. Growing up, I had to bury those thoughts and doing this project made me revisit those traumatizing experiences. I lived with my mom’s drug addiction my whole life, and she has been in and out of my life because of that. She relapsed the summer that I auditioned for Moonlight. It was a lot to take in and express, but at the same time, very therapeutic. We carry around these dark memories and don’t face them and they just eat away at us. It was a very dark experience, man. There were days where I would come back to my hotel like, “This is what being an artist is, to be able to feel and give so much of yourself to your character.”

Considering how deeply personal this film is for you and because you knew you would have to give up so much of yourself to it, did it take some convincing before you boarded the film?

I’m a very spiritual guy and I pray and ask God and follow my intuition. This came right on time and it was something that I needed to do. I was at a hard place in my life when I got this role. I read the script and, immediately, I knew this story needed to be told. It’s a story about homosexuality, but also a story about identity. It’s about a black boy in a community and being different. You have people like Tyler, The Creator who talk about their experiences of being bullied like I’d been. I was very different growing up. Not having a father around really fucks with you. Having your family members on drugs fucks with you. This was the first type of story or script that’s so blatant of its kind that I’ve read. My soul connected to the project, regardless of all those experiences and knowing I would have to put in the work. I knew the outcome would be satisfactory.

Has your family seen the film? How did they react to seeing you in this performance?

The only person in my family who has seen it is my dad. He was just kind of speechless and blown away. I don’t have any expectations from my family that’s any different with anybody else. I just want people to watch the film and understand that judging something by its cover is not cool. Bullying isn’t cool because you never know someone’s situation or what they’re going through. I just want people to empathize and sympathize and appreciate and love more than anything.

How did Barry find you? Where did your journey begin?

This was just a casual audition for me, man. I went in and got seen by the casting director a couple of times. I was actually going to DePaul University for their acting program at the time and I was on summer break for that. After those auditions, Barry flew out to see me. I walked into the room and Barry just kind of knew who I was and knew about my previous film work, specifically my first film The Retrieval, which not a lot of people know about so that was pretty impressive to me. He worked with me through the audition and I was in the audition room for quite some time. I’m walking out and—I hope I have the exact memory, but it was like out of a movie—he was like, “Ashton Sanders, you’re a new star” or something super corny. Then Barry called me to audition in Los Angeles and it was unofficial then I had the part. They called me a week later as I was about to go back to school. This whole experience has been like something out of a movie to be honest.

Where did you grow up? And could you talk more about your start in acting?

I’m from Los Angeles, primarily South L.A. I was that weird kid growing up who wasn’t really into sports. With everything that was going on in my life, too, I didn’t have a lot of friends. I went up to my dad one day and told him I wanted to start acting and he enrolled me into this all-black acting conservatory in Los Angeles called Amazing Grace Conservatory, founded by Wendy Raquel Robinson and Tracy Lamar Coley (RIP). It was great to be able to express myself through this craft and be around so many like-minded, black, disciplined, and young artists. I found a family with them and being a part of that group conservatory motivated me to have the confidence that I have now to be different. So it was very much something that needed to happen for me.

How old are you, by the way?

This doesn’t have to apply solely to acting, but what are you looking forward to next?

I’m just trying to enjoy all of this, man. I want to continue to grow and learn through my experiences. I obviously want to do more meaningful work in this industry. I’ve been dipping into the whole modeling thing, too, so I’m pretty stoked for that. I just have a good feeling about my future at this point. I want to remain humble and happy. I want to be surrounded by love.