The first-time feature filmmaker behind AWOL on her agricultural background, Hollywood misogyny, and discovering Lola Kirke. 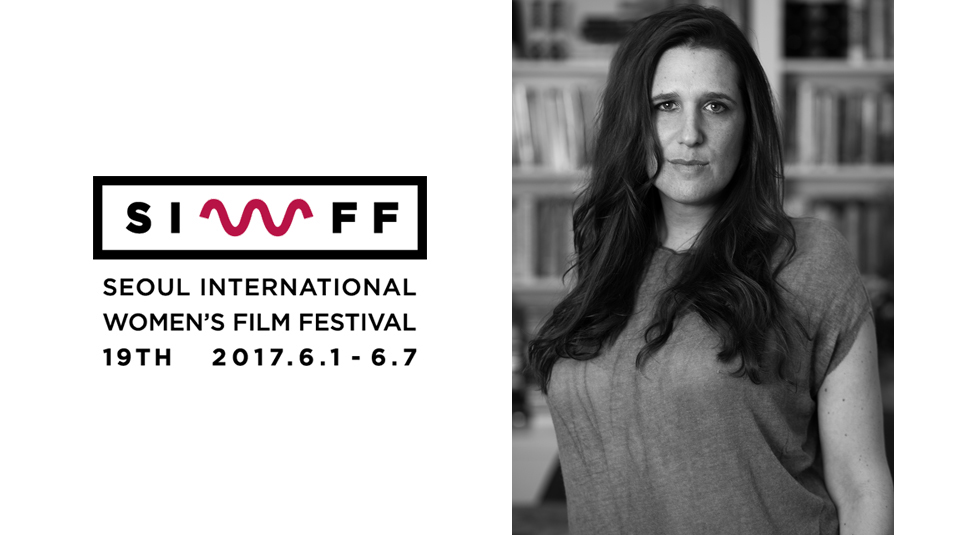 I tend to be a glass-half-full person in general, but if you're asking if misogyny is real and if it exists in the film industry, the answer is yes.

It never even crossed my mind to start a new life until I met you.

Joey (Lola Kirke) is a recent high school graduate on the precipice of enlisting in the Army as a means to escape her economically ravaged, dead-end town—to see the world, if only through the scope of a rifle. Meanwhile, making dollars scooping ice cream at a county fair, Joey meets Rayna (Breeda Wool), a good-timing blonde possibly ten years her senior, who’s chasing the bottle when she’s not “messing around with those tomboys” (the habitual goading of her grandmother). Waking from a one-night stand, Joey learns that Rayna has two young daughters, a frequently absent but still-inconvenient trucker husband, and a need to keep her same-sex adventures on the DL. Their relationship is forged between bursts of passion and cloaked trysts, and moments of cold distance when Rayna has to act the part. Undeterred, Joey campaigns for Rayna to leave her evidently unhappy marriage and start anew. As the film’s title suggests, Joey’s enlistment veers off course.

Anthem met Shoval at her home in New York City last week as a lead up to this year’s Seoul International Women’s Film Festival in South Korea. Since 1997, SIWFF has fought for female filmmakers everywhere, rallying behind the siren song: “See the world through women’s eyes.”

You filmed AWOL in Wilkes-Barre, Pennsylvania, which also happens to be where you grew up. Is it true that you run your own organic vegetable farm out there?

For five years, I ran an organic vegetable farm in a very small, rural Pennsylvania town along the edges of Appalachia called Noxen, where the character Rayna in AWOL lives with her husband and kids. I wish I could have balanced farming, filmmaking and parenting, but that would’ve been one too many balls in the air. Now a farmer friend in Hadley, Massachusetts, has our truck and a farmer friend in Lancaster, Pennsylvania, has our tractor, and I don’t see much nature outside of Central Park. But I feel like I was part of a movement that brought organic vegetable farming to the area where I’m from, and I pray the trend continues. It is one of many areas that was raped by the coal industry for decades, and it is hard for all of us who grew up there to envision working the land in a way that doesn’t involve extracting non-renewable resources. Of course, truly sustainable agriculture is an uphill battle because this country subsidizes corporate-owned, monoculture, chemical farming in so many ways. I think organic farmers are the true heroes of this era.

How did you get into agriculture, and when did you start pursuing filmmaking?

Oh goodness, you are opening up quite the can of worms! When I was 19, I worked as an apprentice on a small, organic, horse-powered farm way down East along the rocky coastline of Maine. Some kind of magical intervention of the universe must have brought me there because it was so far in every sense from the become-a-doctor-or-a-lawyer world in which I was raised. During that year, I turned basil into pesto and blueberries into jam. I fed sheep, spun their wool, and led them to slaughter. I fell in love with the smell of healthy soil, the cycles of nature, and the interconnectedness of all beings—and a year later, I left to earn a degree in sustainable agriculture.

Fast-forward past working at a small environmental school in a village in Ecuador devastated by mono-crop agriculture, El Niño, and an earthquake—and fast-forward past a very serious bout with ovarian cancer that had me in the hospital for months—let’s just say that, by the time I was in my mid-twenties, there was a lot I wanted to say and I was pretty fearless about saying it. I rode through America’s Corn Belt in a bicycle circus, performing skits in small towns about sustainable agriculture. Under Peter Schumann’s direction, I performed with the legendary Bread and Puppet Theater, co-founded an environmental theater troupe The Liberty Cabbage Theatre Revival, and toured the country on a bus converted to run on vegetable oil. And of course, as a theater artist, I began to yearn to make films. With film, you can portray with such lucidity the nuanced socio-political backdrop upon which to unfold universal stories. Plus, the size of the audience!

I love everything about directing: casting, directing actors, and artistic collaborations with the DP, costume designer, production designer and editor. There are so many more stories I want to tell.

There’s a lot to unpack, but AWOL is at the core about class disparity, economic opportunity, and the pitfalls of circumstance. Why did you ultimately want to tell this story?

It is very exciting to me that in our Q&As after the film, people are talking a lot about class. AWOL has been called “a splendid meditation on the boundless possibilities of first love constricted by the trials of poverty.” It has been called “a story of star-crossed female lovers whose obstacles have less to do with societal norms than with the economic realities of Pennsylvania coal country.” My point is, AWOL is a love story on the surface, but the task of the film is to exist on multiple levels. Layered underneath the romance, I wanted to open a conversation about class and opportunity. Having grown up in a post-industrial area where the long-gone coal industry still leaves its scars, I wanted to talk about the parts of this country that have been left behind, and the choices that young people make as a result.

Your same-titled short played at Sundance in 2011. It’s been a six-year journey for AWOL. The film is just as potent today—if not more so. There’s so much anger, frustration, and a general feeling of uneasiness today. Do you find that your film is extra charged as a result?

I do. Many people in this country are asking questions right now about how we came to this moment, in which white supremacy is being normalized and an openly misogynistic fascist is making a joke of our democracy. I certainly don’t think the discontent and disillusionment of poor and working class white people in Middle America is solely responsible for the mess we’re in, but certainly, that’s a factor. Many people in this country feel that their parents had a better standard of living than their children will, and that’s a problem.

I can imagine a lot of people would want to talk to you about AWOL being a queer film and bring to the surface LGBTQ issues, which is certainly a huge narrative thread and important to talk about. But how far away are we from not categorizing films as being “queer”?

I’m hardly an expert on this topic. But I can tell you that iTunes does not have a LGBTQ category, and we were number four on iTunes under the category of romance for the first few days after AWOL was released. And a week later, AWOL is still in the top ten.

You received your MFA in film at Columbia. In a post-screening Q&A, your producer L.A. Teodosio mentioned catching a glimpse of an edit of your short—or something like this—and asking, thrilled, “Who’s making this? People don’t make queer films at Columbia University!” Did you see films being made that involved gay themes when you were there?

[Laughs] I’m laughing at your question, remembering the thought that crossed my mind when she said that, which was, “Well, there were a lot of straight men making gay films when I was at Columbia.” For real—there seemed to be almost an obsession with gay men and hookers as main characters. L.A. Teodosio and Jessica Caldwell are both amazing creative producers, and I met them both during my time at Columbia. It is a wonderful program. I feel like I knew nothing whatsoever about directing until I got there.

I’ve come to learn that Lola Kirke sort of made her way up the industry while AWOL was being made in those six years, so you clearly saw something in her at the outset. I think Breeda Wool is pitch perfect in her role. Can you share a striking observation you made about the two of them, privately in your mind, when you first met them?

I met Breeda a few years before I met Lola, maybe in 2009. A friend of mine, an installation artist named Natasha Johns-Messenger, invited me to see Breeda’s performance in a movement dance piece at P.S. 122 called blind.ness. I couldn’t keep my eyes off of her: the way she carried herself and how present she was. Breeda still lived in New York then, just a few blocks away from me, and I started working with her on whatever little project I was doing. She’s one of these true actors who just wants to work all the time. While I was writing the script for AWOL, the short, we began meeting to discuss the character of Rayna. We developed her together. Breeda played Rayna in the short, which premiered at Sundance in 2011, and I fought hard to keep her for the feature. She’s magnetic. It has taken a while, but people are catching on.

With Lola, it was a whole other story. We had a casting director. This was in 2012. The role of Joey was a tall order. The Joey I was looking for had to sing like an angel, look no older than 18—but actually be at least 18 because of the nudity—have a mouthful of imperfect teeth that signaled a working-class upbringing, and have incredible range as an actress. We were on our last day of auditions for the role of Joey in New York. I hadn’t seen anyone that felt right. We were about to push the shoot to hold auditions in L.A., and then at 9 AM on the final day of New York casting, Lola walked in. She looked like the Joey in my mind. And her singing voice… unreal.

The next day, we brought Lola in for a callback with Breeda. I wanted to see if there was chemistry. Afterwards, I brought that audition tape over to Rose Troche’s house. She is both a good friend and a mentor. God bless Rose, she pulled together a whole little crew that night, and we all watched the audition tape together. And we all agreed: Lola was magical. She is magical.

I have to ask you this because it always goes either way: Do you enjoy talking about being a female filmmaker in the industry? How often do you talk about gender disparity and the opportunities that you’re afforded as a result with your contemporaries?

I love being part of the kick-ass group called Film Fatales. We meet monthly to share what we’re working on, and to ask for and offer support. And I’ve been lucky informally for years to feel that kind of support and camaraderie from filmmaker friends like Cherien Dabis, Maria Govan, Maryam Keshavarz, Rose Troche—the list goes on and on because there are so many amazing women making work. I think I tend to be a glass-half-full person in general, but if you’re asking if misogyny is real and if it exists in the film industry, the answer is yes.

I’m working on a TV series. I can’t say more at this time, but I’m very excited about it.