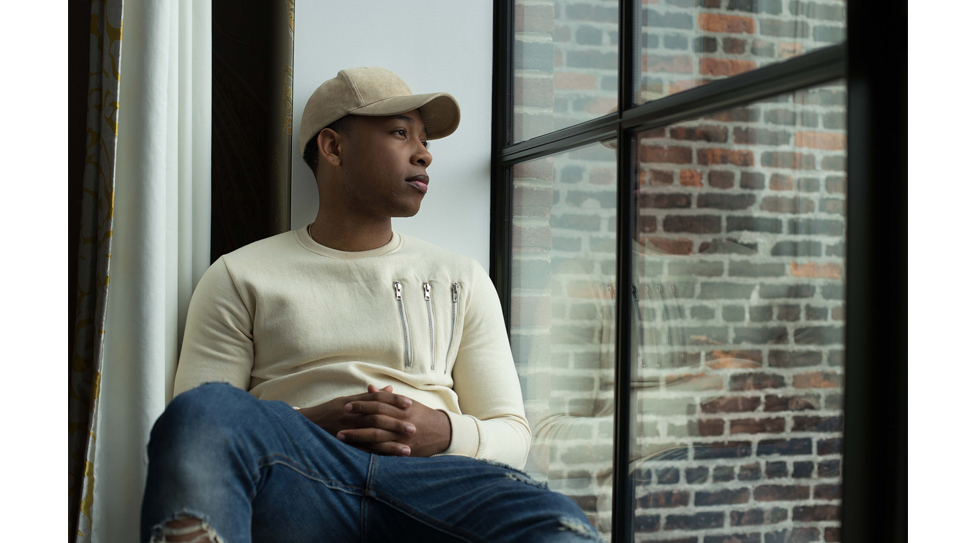 I fell in love with film on a whole new level, really, last year working with Kathryn Bigelow and working with Will Smith on Collateral Beauty.

First-time feature filmmaker JD Dillard premiered his genre-questioning Sleight last year as part of the Sundance Film Festival’s NEXT competition, which primarily showcases emerging new talent. Dillard’s an easy guy to root for: He wrote the thing while working the receptionist desk at J.J. Abrams’ production company, Bad Robot. Now it appears that Dillard is in negotiations to remake The Fly, more than 30 years after David Cronenberg’s body-horror benchmark hit theaters.

In Sleight, a young street magician named Bo (Jacob Latimore) is left to raise his little sister following the death of their single mother. Since bills are hard to pay with card trick tips alone, he peddles party drugs to revelers around South Los Angeles for his paternal but inflexible supplier Angelo (Dulé Hill). On the conceptual side of things, the film plays like the origin story of a self-built superhero: Our magician is self-wired for telekinesis. It’s an awkward contraption crudely fashioned into his upper arm, which allows him to levitate small metallic objects—and turn bullets around with the flash of his hand. Bo’s life takes a sharp turn when a rival gang syphons off Angelo’s drug market and he’s brought in to neutralize the situation. Suddenly thrust into a world of guns and gang violence, Bo plots his escape and makes clever use of his sleight of hand skills.

In a critical moment of confession regarding his man-made powers, Bo asserts: “I can do something no one else can.” Much like that, Latimore lifts Sleight up all by himself. It’s a nascent beginning to a promising career for the 20-year-old. He’s confident and charming without overreaching. On the horizon are William H. Macy’s Krystal and Kathryn Bigelow’s as-of-yet untitled 1967 Detroit race riots drama with John Boyega, Hannah Murray, and John Krasinski.

Sleight is in theaters nationwide on April 28th.

Congratulations, Jacob. I went into it blind, which is the best way to experience any movie.

Thank you so much, man. This is really incredible. We’re all very shocked to be in this sort of position after we did this very small movie. We had no idea where this was headed.

It took me a second to realize, but I had already seen you in The Maze Runner. You’re really impressive here in Sleight. It just felt like you didn’t have a false note in your body.

I definitely wanted to make Bo feel real as possible. With this type of movie where you’re balancing different genres, Bo needed to feel relatable. Bo’s a good kid who’s forced to do things that are out of character due to circumstances. That’s what I really tried to bring to light. Let everything else be what it is. Let the special effects and the magic speak for itself. I wanted to focus on the core. Bo really cares about his family. He cares about the important things in life.

Bo never lets his powers overwhelm his judgement, though. We never see Bo unleash his powers in a moment of gluttony. I’m intrigued whenever this thin threshold exists between the good and the bad, and the likable versus the unlikeable with characters in movies.

For sure. If we were to continue the story, I think Bo would be in a place where he would strictly want to keep his abilities in the performance of street magic. Due to circumstances, he had to go out of character. He had to use his brain and his obsession with magic to deal with those circumstances. At the end of the day, I think Bo wants to remain as human as possible.

I was surprised by how dark this movie is in places. I don’t want to spoil anything, but Bo’s moment of no return was shocking. Did those moments just jump out at you on the page?

Yeah, that was the thing that really intrigued me about the movie. I think when we can push a character to his limits and really push them outside the box, it always makes for a great movie. It builds a lot of character. That was one of many juicy parts of the script that I loved so much.

Were you carrying around a deck of cards everywhere you went in preparation for this?

[Laughs] Oh yeah, literally every day for a couple of weeks before filming. We filmed this movie in sixteen days. When I saw the movie and saw what we did in that short amount of time, it looked like we had worked on it for two or three months. It almost scared me. I was like, “Woah, what? That’s us? That’s what we did?” So for most of the advanced cardistry, we had this incredible magician who’s been flipping cards for about ten years now. My goal was to sell the performance of it, and to feel comfortable in that world and feel comfortable holding the cards. There are a lot of little things that come with being a magician that people kind of overlook, like the personality, the eye contact, how they hold a deck of cards, how they spread them… I just wanted to look like I had held those deck of cards before and I could possibly do much more than that.

JD [Dillard] grew up doing magic tricks, didn’t he? I know you had other consultants on the film for that stuff, but to have your director in your corner like that is pretty special.

Absolutely. I love being intimate with a director. Sometimes I’ll be on bigger movie sets where you have the director focusing on a bunch of things, but when we have a small team like this, we get to talk every day about the script, have dinner… That was a really cool experience. You don’t always get those chances working on a film. I think that’s one of the reasons the film is what it is.

Did you and JD know each other prior to working together? How did you get involved?

I didn’t know JD. This was during pilot season and I was auditioning for a few different things. But Sleight was a script that stood out to me and I definitely wanted to be a part of it that much more because, as an actor, you wanna try different things and take that risk doing the different script. Part of the script I felt like I related to from before, but the fantasy world of it—the glitz and glamour, and the more hero aspect—was something that really intrigued me. So that was awesome.

The ending sets you up for a potential sequel in a big way. Is that something you talk about?

When JD and Alex [Theurer] wrote it, I don’t think they wrote it to continue. But now that we’re done and people are asking questions, it’s definitely something we talk about. Nothing’s really for sure. We have a comic book prequel coming out very soon with really nice illustrations. It’s gonna be really cool—featuring more energy of the film. But as far as a part two? We’ll see! [Laughs]

You can flesh out that world so much more. The comic book sounds like a great idea.

In the comic book, we’re gonna dive into how Bo met Angelo, the death of his parents, how Bo had this scholarship and the opportunity to go to college… He had a real chance at living a successful teenage life, but because life hit the fan, he was forced to live the world he’s in now.

So you’re obviously a successful recording artist as well. You started at 9. You already hit a lot of milestones on that front. Did you want to act back then or did that come later on?

It came a little bit later on. I had an opportunity that came to me: an audition for The Lion King to play Simba. Those were opportunities that came to me at a very young age. I wasn’t very interested in that at the time because I was just strictly focused on music. I knew exactly what I wanted to do because music and that energy was always around me with my dad and my uncles. Kenny Lattimore is my cousin. R&B music was my foundation and I knew that’s what I wanted to do.

When I moved to Atlanta, I met my first agent, did a couple of auditions and took some brief acting classes, but nothing heavy. I never really went into intensive acting training. I’ve always loved great movies and great television, and that really prepped me for now. I fell in love with film on a whole new level, really, last year working with Kathryn Bigelow, and working with Will Smith on Collateral Beauty and that whole cast. I worked with William H. Macy on an independent project.

The ensemble on Collateral Beauty was pretty mind-blowing. The cast of Krystal looks great, too. What struck you most about William H. Macy in your general observations of him?

What I loved about working with him was that he would find laughter and color in a lot of darker scenes, with things that we would naturally be emotional about. It’s laugh and cry at the same time. [Laughs] He would say, “I don’t want you to cry. I want the audience to cry,” and I was like, “Woah.” Those little things really opened my eyes to finding different ways to approach a scene.

Still untitled. The release date is August 4th. That will be a good birthday month for me. [Laughs]

It’s only fair I ask you the same thing about Kathryn Bigelow: What’s striking about her?

She’s just very raw. There are no special effects with the Detroit project and a lot of her movies are that way. They’re realistic and they’re real stories, which made it that much deeper. I loved how she let us find ourselves, find our characters, and find what we wanted to do. She’s still a director, but she let our colors show in whatever we did. She let us bring our own things to the table.

What’s the learning curve like for you jumping from film to film and director to director?

Sleight tackles our conflict in striking that balance between what we’re passionate about doing and the pragmatism we need to just live a functional life. At what point does real life supersede what we love doing? That must resonate strongly for an artist especially, right?

I think it did at one point when I was doing film for kind of fun and my passion was music. Music is still a passion, but I think after working with so many great people in the film world, it’s more of a balance for me now. I consider it all performance. It’s all about getting into character. It’s all about finding yourself or finding someone else. When you’re doing film, you’re investigating someone else’s world and try to relate to it. When you’re doing music, you’re trying to find yourself and relate to other people that way. I’m starting to see the similarities now.

Tell me the very first thing that pops into your head about The Maze Runner shoot.

I just remember the dusty heat. The heat was crazy. They had four or five snake wranglers every day and they were catching three or four [snakes] every day—each. We were in New Orleans. I’m a city boy, so I wasn’t used to that. I came to set with sneakers like I was about to get onto a fashion show or something and they were like, “Yo, you gotta change up the gear.” I know.

You just seem so laid-back about everything. You’re really, really chill.

[Laughs] I gotta be!