The actor on trust, imposter syndrome, and the toast of Sundance—Sophie Hyde’s Good Luck to You, Leo Grande. 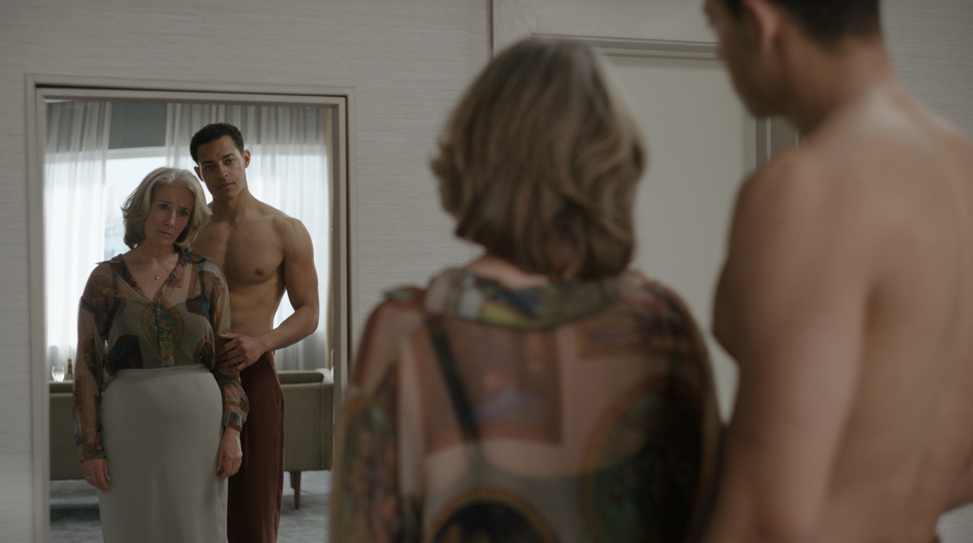 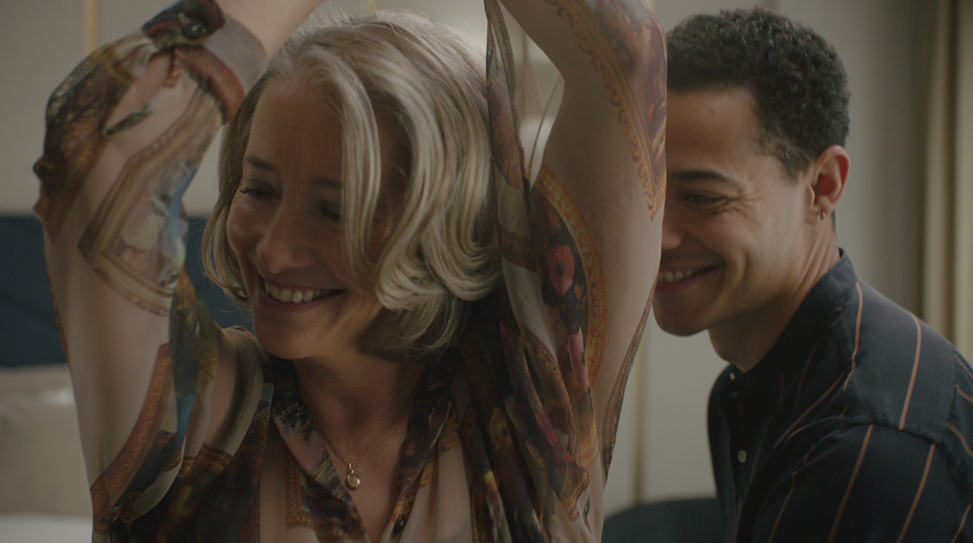 To step through that fear, to focus on the work, to get through to the other side and to feel good about the work you did, I’m starting to recognize that you’re not letting the fear conquer you, but you’re also just coinciding with it.

Sophie Hyde’s Good Luck to You, Leo Grande, zeroes in on that impossibly pleasure-deprived individual. To spell it out more bluntly, Nancy (Emma Thompson) is a buttoned-up, middle-aged, former schoolteacher who has never had an orgasm, having settled for unfulfilling, one-sided action in a mechanical marriage for three decades. Now recently widowed, she’s determined to find that elusive orgasm her late husband never bothered to look for, and that she’s always been too ashamed to discover on her own. And Nancy isn’t afraid to go to lengths she once considered unthinkable to get it: through the aid of an escort—the titular Leo Grande (Daryl McCormack).

It becomes obvious from the get-go that Leo Grande will need to put in some extra work with this particular client, and not of the physical kind. Nancy is still pragmatic, unadventurous, and unsure of herself and her life, so while she continually confesses to wanting to indulge in her fantasies, she’s at the same time constantly going back on their agreements. What’s her fantasy, Leo asks. Nancy chokes on her desires: “To have sex? Tonight? With you? Do you mind?” Across four rendezvous in the same hotel room, what Nancy unexpectedly receives is a warm and well-adjusted stranger who is more responsive to her needs than even she has ever allowed herself to be.

Cast opposite Thompson and her delightful signature deadpan Britishness, Irishman McCormack, who’s still somewhat of a newcomer, is undeniably radiant in a role so subtle it could appear flatlined had it fallen into and molded by less capable hands. It is indeed a lovely dance between Thompson and McCormack—sometimes actually, at other times metaphorically—that’s so perfectly pitched it’s easy to get swept up in it. Working from a sympathetic and purposeful script by comic-scribe Katy Brand, Good Luck to You, Leo Grande is elevated from its deceptively simple premise to an endearing exploration of self-discovery, body neutrality, and sex positivity.

Good Luck to You, Leo Grande premieres on June 17th on Hulu.

New York is good! I flew in last night. I’m here so briefly, though. I’m actually in the middle of shooting a film in Hamburg so I’m flying home this evening. It’s the quickest stop I’ve ever had. I love New York. I was here very recently in March, but it’s nice to see it in the summer season.

Congratulations on this wonderful performance. You surprised me, you really did.

There’s nowhere to hide in this movie, is there? It’s a two-hander. One location. We pick up on every gesture and every word. Inevitably, did you sense a slight air of stage about this?

I think mainly in the rehearsal space. The prep was very much like rehearsing a play. We had the measurements of the room taped out on the floor. That was a major thing. Because there is such an empty space, what begins to happen is that the body becomes the landscape for expression. All these gestures really are enunciated. But I think the script lends itself to camera very well because it gives you access to those details, like the touch and all of these other nuances that really only the camera can capture. That was exciting to see, and that was Sophie [Hyde] as well, having a real idea of what those moments were. So it was nice. It had those theater elements, but once she got into shooting the film, it really felt like an intimate feature film.

And the simplicity of the set-up is quite deceptive, isn’t it? You’re engaging in these seismic conversations about, well, just so many things: age, sex work, sex positivity, body neutrality, a parent that questions whether she’d have kids if given the chance to do it all over again…

Yes! I mean, there’s so much to be explored in this film. I think that was the exciting thing. It’s just one place with two people, and yet, we almost seem to cover so much of life.

So how to ease into it? Are there all these conversations in the lead-up to shooting?

Yeah, Sophie really wanted to invite us into those conversations. We’d rehearse a scene and it’d just affect us, and we would begin having dialogue about these things. Naturally, as an actor, you start to share from your own life how this script is touching you and how it reminds you of an area in your life. That was quite amazing ‘cause the process itself just brings you closer and closer to the film and into the characters. I found it very nice to flesh out all those things ‘cause I believed in a lot of the conversations that they were having anyway, particularly seeing a young man embody his sensitivity, sexuality, and masculinity in a very new way that I hadn’t seen in a script before.

This is a brave role to take on. The nudity, certainly, but I imagine it’s intimidating in other ways. You’re working opposite Emma [Thompson], who has rightfully called herself “a warhorse,” having done pretty much everything under the sun at this point. Do you ultimately arrive at just trust? And maybe you get there differently with the two of them.

I trusted both of them quite early on. When I first met Emma, we went for a walk. We were just speaking about the script and the story. At the same time, we were assessing how we felt around one another energetically, and whether it felt like there was a safety there. That felt really apparent to me, and I think she could say the same. We were able to feel comfortable with each other very instantaneously, and also humor-wise. She’s just hilarious. She’s so much fun and so intelligent. It really flourished into a safe kind of cocoon, in which then we felt we could go and do our work.

With regards to Sophie, I’ve never really worked with a director who’s so intuitive with their actors. She has a special gift of being able to check in with who she’s working with. I think she was aware that I was bringing a lot of myself into Leo and the vulnerability. She was also aware that I was working alongside someone like Emma as a relative newcomer in this capacity—a two-hander—and how that might be overwhelming in itself. Naturally, there were overwhelming feelings of anxiety, not wanting to drop the ball in playing my part. She comforted me and soothed me a lot in the process. She reminds you that you’re there for a reason—that you’re here to play your part.

You’ve described yourself as being quite gentle in nature in the past. I wonder if somebody like Leo is instinctively more familiar to you than, say, who you portrayed on Peaky Blinders.

Yeah, absolutely. I am a bit more gentle in nature. I think the emotional intelligence and the sensitivity that Leo embodies was something that I recognized in myself. The conversations he was having around intimacy and sexuality were conversations I’ve had myself as a young man with my own friends, both male and female—about body and about acceptance and about self-love and about moving past what society tells us is meant to be acceptable. So it felt like a natural fit. When I read the script, it honestly at one point felt like, “Who has been in the room jotting down what I’ve been saying?” because some of the dialogue felt like it wasn’t the first time I was having these conversations. In that sense, I felt really close to the character. There were other areas in which I had to learn more. With regards to sex work, I didn’t really know anything about that world prior to this film. That unfamiliarity was aided in prep with Sophie and with meeting real sex workers. But the essence of Leo and that sensitivity was something that I recognized.

Going back to what you were saying about the anxiety you felt in taking this on, imposter syndrome is something you’ve touched on in the past as well, as it relates to your Peaky Blinders experience. You had been binging the show, and then all of a sudden, you were on that set where it felt incredibly surreal. I mean, that’s just a natural reaction, isn’t it?

First of all, you’re the real thing, Daryl. Secondly, those feelings always subside, don’t they?

I think so. I did have a major case of imposter syndrome at the beginning stages. It’s not to say it won’t come again, but to step through that fear, to focus on the work, to get through to the other side and to feel good about the work you did, I’m starting to recognize that you’re not letting the fear conquer you, but you’re also just coinciding with it. I think that was a big realization for me. I’ve tried to make a rule for myself: no matter what project or work I’m doing, if I’m hired to do it, I’m just going to accept that I’m meant to be there and let the feeling of being comfortable catch up to me. I’ve decided to make that the rule from now on and not let myself think otherwise.