Pierre Deladonchamps on his beginnings, Melancholia and his new film Stranger by the Lake. 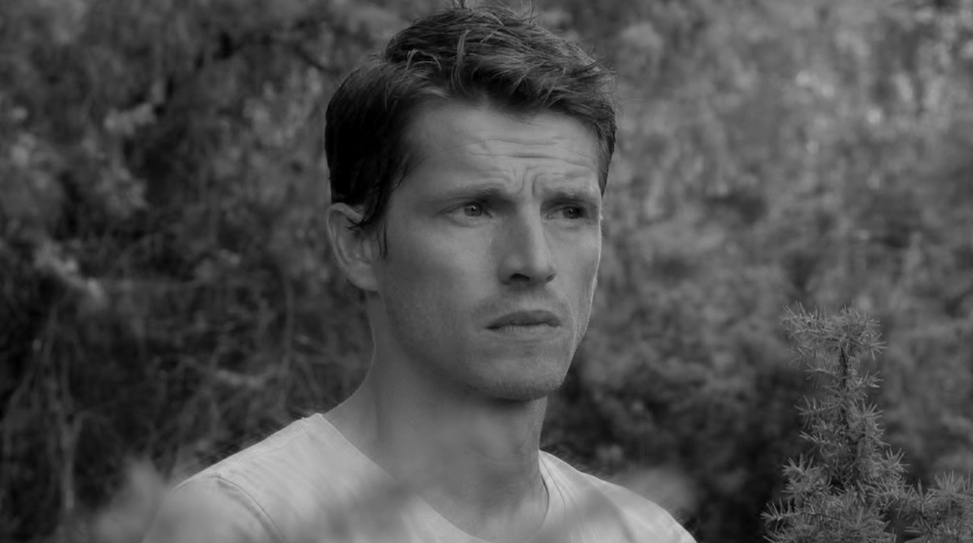 It's how we view life, which has nothing to do with the fact that you're a woman, a man, gay or straight.

“Nothing sounds as good as someone talking with food in their mouth,” according to no one who has said that ever. But we do know how important it is to get down to the truth of things that doesn’t require a magazine’s editorial calendar or press junkets set up by a movie studio to promote this or that movie. In this new Anthem series called This Course, our goal is to keep things as transparent as possible. It’s essentially an open dialogue, in this instance with actor Pierre Deladonchamps in Paris where we discuss a myriad of things about his latest film. He has two films set for release in 2014 aside from Stranger by the Lake, which is getting great press.

How did you get into this business?

I studied at le cours Florent in Paris for three years and found an agent. I started auditioning for TV and cinema.

I’m not too familiar with how things go in France if you want to break into acting.

I think it’s the same everywhere. I think you have to study it and then find an agent. That’s it.

How did you find your agent?

I reached out to a lot of agents and one of them wanted to work with me. When I met the one I’m working with today, I knew that she was a really good agent. Artmedia is the most important agency in France and maybe in Europe.

Not that much, but I’ve done some TV. It was the beginning of my professional experience in acting. I guess there was less pressure there than in cinema.

How did you get involved with Alain’s [Guiraudie] movie?

The casting director contacted my agent in a very formal way. There were two or three meetings because they were considering eighty people for this role at the beginning. The director decided to choose me.

I’m sure you had certain questions and concerns going into this film in terms of what might be expected of you.

Many things. It didn’t only have to do with the fact that this film takes place on a naked, gay beach. There were many, many things. I thought the script was very powerful. It was difficult to imagine how I would pull this off, but Alain was very direct in his vision for the story. I told him that I wouldn’t do the sex scenes myself and he knew that early on. Christophe [Paou] felt the same way, so we had body doubles. In terms of being naked, I don’t care as long as it’s justified in telling the story. I don’t like it when people are naked in films just to show naked bodies. When I watched Alain’s other movies, I thought they were very clever. I knew that he would treat this material very well. I trusted him.

I met with Christophe the day after seeing this film at the Busan International Film Festival and I was actually scared to see him in person. He’s turned out to be such a nice guy.

[Laughs] He’s a really nice person. He is nothing like the character. He’s playing one and that’s the work of an actor. We had the same approach to acting, so it was comfortable working with him. We talked a lot about what we’re doing, so everyone on the crew was on the same page.

What was the most difficult part about shooting this film?

The most difficult part wasn’t the sex scenes actually, which I thought would be the most difficult. It was the swimming. The movie was much longer at the beginning and I had to swim a lot. The water was freezing because we shot it in the fall.

What was the most exciting part?

Maybe the scene in the forest where I’m running away from Michel. It was fun doing that, being scared. I also liked the scenes with Henri (Patrick d’Assumçao), who has become a good friend of mine.

An amazing actor in this.

Yes, yes. I loved it. He had some of the most powerful scenes in the movie. It didn’t have to do with anything other than chatting with a great friend.

Saint-Cloud and Versailles took down posters for this film earlier this year because a lot of people got offended by the image of two men kissing. What’s the overall climate like in Paris these days when it comes to something like homosexuality?

I don’t think it has anything to do with the movie. I wouldn’t say it’s representative of what really goes on in Paris because I don’t know. I don’t really know.

Have you noticed how audiences receive this film in different countries and at different festivals?

I felt that people are very concentrated on the details and very sensible. I don’t think it has much to do with countries, but about personalities. It’s the same all over the world. To be honest, everyone has been very welcoming of the film when we showed it. That made me glad because that opens it up to good conversations. There were people who were shocked, of course. I can respect that and I understand. Some people aren’t ready to see these kind of movies. As Alain says, sex in cinema is one of the last taboos. Sex is often thought to be porn and here, this is a story with real characters. It’s the same for Blue Is the Warmest Color. It’s new and this is what’s being highlighted by festivals now.

This is universal storytelling that doesn’t have much to do with sexuality.

No, of course not. It’s about loneliness and what you’re capable of when you’re in love. It’s how we view life, which has nothing to do with the fact that you’re a woman, a man, gay or straight. I think that’s the greatest thing that Alain managed to accomplish with this movie. Everything in the film is justified. For me, it’s funny because this isn’t a movie that you can take what you like and leave what you don’t like. You take it as it is.

What they choose to censor in different cultures is really interesting. They show you really provocative stuff in South Korea, but every cigarette is pixelated.

It’s the same in France!

As I understand it, you shot two endings for this movie. Are you happy with the one that made it onscreen?

Well, the director gets to choose. [Laughs] Did Christophe tell you about the other ending?

He didn’t really tell me, no.

Franck and Michel meet in the forest, leave the beach and never come back.

Both of the endings are open-ended then?

Well, no. In the chosen ending, you don’t know what’s going to happen. In the alternate ending, we imagine that they’re really in love.

Which ending do you prefer?

I prefer the one that Alain chose and I like how the audience can interpret the ending as they like.

Are those the types of movies you most enjoy watching? Movies that are open-ended?

It depends. I wouldn’t say I prefer them. For this one, I like that we don’t know.

What’s the last film that you saw that affected you?

The last one I saw was Melancholia by Lars von Trier on DVD. I loved it and love his work.

The atmosphere. I think it’s a problem, especially in America where everything is going very fast. I don’t know if we should blame art or society for that. We put emotions into the people instead of having it come to them. I like it when the directors give breath to the action. The silences are very important to me.

The silences in Alain’s movie says so much.

Yes! And that’s what I like in cinema. You say so much with the body and the gaze. I think we do that so often in real life, but don’t put them in movies.

We don’t know anything about Franck and Henri outside of the lake. Do you then create a backstory in order to build this character?

It’s interesting that you tell me this because Christophe didn’t want to have a backstory for his character either.

I didn’t know that, but it was the same for me.

Do you have any other memorable experiences from the shoot?

The scene where I find Henri with his throat cut and all the blood spewing. We didn’t have a lot of time to shoot that scene. We only had two or three times to do that, maximum. We didn’t rehearse that, so I didn’t know how it would turn out. That was the first time that I would see someone dying in front of me with all this blood. It was a great experience as an actor, but it was also shocking.

That was a great moment because leading up to that event, you don’t know if Franck and Henri is going to fuck or what.

That’s what the director intended. Alain didn’t want me to overact when this happens. He asked me not to act and do it simply.

What was it like to premiere the film at Cannes?

Oh, it was amazing. This was the most important film for me. It was a very good souvenir.

Christophe sort of had a problem with receiving the Queer Palm at Cannes because it was putting the movie into a category. What’s your take on that?

Is this something that you discuss with Christophe and Alain while you’re making the film?

I mean, we do talk about it. I think Alain had the same feeling. He didn’t want it to be a “gay” movie, but it certainly has that theme.

I only started asking this question after talking to Xavier Dolan because he was very angry about the Queer Palm prize he received for Lawrence Anyways.

Yes. He was very upset because he felt like he was put into a box.

This movie was presented in the Un Certain Regard category at Cannes, so it wasn’t presented as a “gay” movie. The movie deals with a gay relationship, so maybe a gay person watching a movie about straight love is a different experience. I don’t defend the Queer Palm, but I’m also not against it. I think some people need to promote “gay” movies and say they exist, and maybe in a couple of years we won’t need to do that because it will be normal. We’re not there yet.

Do you have any aspirations to get behind the camera?

Maybe one day, but not at the moment.

I just came back from Japan. I have two films coming out in 2014, but they’re both a work in progress. I can’t tell you too much about them, I’m afraid.