A closer look at Steven Knight’s Locke with the man who has packed more into his career than most manage in a lifetime. 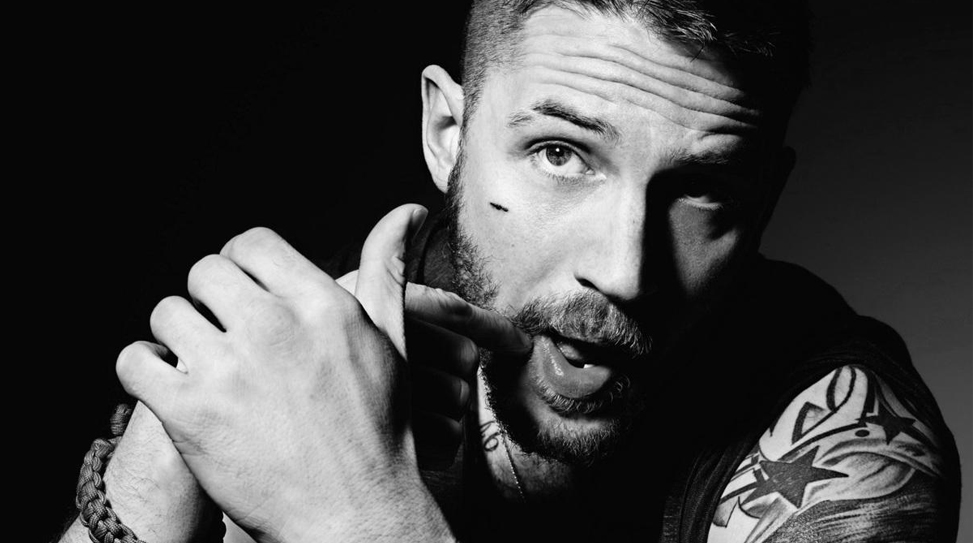 He’s like Captain Haddock in Tintin. That was a light source, but I just pulled sources from everywhere.

Getting in the driving seat for Locke, Tom Hardy explains how he has survived. “Life is a risk,” he says. “You can’t win a fight unless you’ve been knocked out.”

Born in Hammersmith, England, Hardy’s early years were troubled despite a comfortable middle class upbringing, not least when he was picked up for joyriding in a stolen Mercedes with a firearm. Following a brief stint as a model, he turned to acting. After being kicked out of drama school, he won small roles in HBO’s Band of Brothers and Black Hawk Down. This should’ve been his launch pad into Hollywood, but his addictions to alcohol and crack cocaine took hold. Then came rehab and redemption—initially in the form of a BAFTA-nominated turn as a heroin addict in TV drama Stuart: A Life Backwards. Shedding nearly 30 pounds for the role, Hardy went the other way for the career-defining Bronson and The Dark Knight Rises.

Even by his own aggressive standards, the 36-year-old Brit is taking forceful strides towards becoming the most electrifying man in the entertainment industry. Written and directed by Steven Knight, Locke is set entirely in a car across 85 minutes of real-time action. Hardy plays building engineer Ivan Locke, a man driven to doing the right thing. On the eve of the biggest assignment of his life, he abandons work and heads to London where a woman he had a one-night stand with is about to give birth, leaving him to field increasingly tense calls from his wife, boss and others across a nightmare journey.

With a handful of films in the offing, including Mad Max: Fury Road and the Elton John biopic Rocketman, there doesn’t seem to be room for much else in this man’s diary.

What were some of the challenges that came with working in such a confined space?

There were no challenges at all working in such a small workspace. You just have less parameters in which to explore and investigate. It’s almost like being in the dark. It’s an easier space, I suppose, than being in a dog kennel. [Laughs] There are certain boundaries within that space. In a literal sense, I have my GPS system, a box of medicine because I had a cold—

Did you really have a cold?

I did, yes. That’s always the way, isn’t it? When you get asked to do something, you get ill. It was all that stuff and the road ahead, so it was a safe space to explore. A lot of the functionality of the piece is in the airways of conversations coming in from different parts of the country through the phone. It’s a talking heads piece, so it was nice to be doing something as simple as fixing a light bulb or changing the plug. Driving a car in one direction has a practical and fundamental symbiosis with what’s going on around the world inside his head. It was nice to play the containment. Locke is a man who puts out fires and he’s so good at calming of the people. He’s the anchor for so many people, even in a place that’s not so solid. And yet, everything goes so horribly wrong for him. Perhaps his natural ammo to be the fire-calmer, the guy who can organize and join the dots, finds himself in a position where he can’t solve this problem or do anything about it. Locke’s a floodgate of emotions, psychological human paradoxes and greyness, which is terrifying for him. Ultimately, I think he breaks new ground with himself. He has a clean sheet by the end of the journey, whether you like it or not. He has the courage and the bravery to completely deconstruct his own self and leave himself naked. Whether you like him or not is irrelevant because he was brave enough to try. This makes him less than ordinary. He faced head-on a situation—rather clumsily—that I would’ve been terrified of myself… That was a long answer, wasn’t it? Sorry. [Laughs]

Steven Knight comes to the material with a personal past in concrete pouring. What was required to nuance this character in that very specific world for you?

I think there’s a running theme in all the characters I play and I connect with all of them on some fundamental level. Ultimately, everything’s in the script, my director and what he’s giving me in the case files, as they say. What was interesting about Locke in comparison to everything I’ve played before was, in essence, the containment. It didn’t require any physical exposition, a physical life being overtly bombastic or violent. Having said that, there’s a huge amount of vengeance and aggression in Locke, which is deeply, deeply rooted that you don’t see. I mean, you obviously see that in his imagined conversations with his father. But there’s this propulsion in his drive to London, which is compelling enough and it’s driven with a lot of anger in many ways. It’s this containment and the deconstruction of his own psychology, without an analyst and on his own, into a rebuild of a new life that destroys an old one. I could understand it, from purely looking at it and talking to Steven, the fascinating thing about looking at the human condition in an ordinary environment. This is a hugely dramatic night for an ordinary person. It has been zeroed in on this one person in one car on the motorway. The movie very easily could be called Not Very Nice Wednesday. [Laughs] It wasn’t so far-removed from home. You don’t have to have huge stunts and gregarious characters, which are fantastic as well, to illicit a response from an audience who’s intelligent and demands a certain stimulus.

Were you driving the car yourself at any point?

I was very authentically trying to drive. It would’ve been illegal for me to read the Autocue and drive at the same time. I was watching the Autocue, which is very similar to watching the road. And I was reading the script because I got the script three days before we started shooting. I didn’t learn the lines… If you didn’t notice that I was reading the lines, that’s just a bonus. So I’m there following the script, which was beautifully written. I trusted the script, so I wasn’t trying to emote. I would have these phone calls coming in live-feed into my ear. Steve would say, “Call Tommy now” and I had to speak to my ensemble who called from their respective hotel rooms. I reacted to everything real-time, while on the back of a rig watching cars go pass on the motorway. And I have this cold! My life wasn’t so dissimilar to Locke’s at the time. And I tried a really dodgy Welsh accent. [Laughs] To add insult to injury, I’m going to try my best Welsh accent.

I tried to channel Dylan Thomas’ Under Milk Wood and failed. Under the scrutiny of a proper Welshman, they would probably say it was awful. [Laughs] But I did listen to Richard Burton. The Welsh accent is very kind and gentle. There’s something about that country that’s also built on harsh terrain, and it’s very windy and wet. It’s a very powerful country in many ways with the elements. For me, it was symbolic of where Ivan is coming from. We wanted a working class character without trying to be classist. He’s blue-collar and worked from the floor up. He’s incredibly successful at what he does under incredible amount of pressure. Ultimately, his grassroots come from a specific postcode. Even though my accent wasn’t totally on the money, that’s up to taste and people’s ears. A lot of tough men and women have come out of Wales. It sounds very mellifluous and melodic, but we didn’t want people falling asleep either. Much like I might be sending you to sleep right now… [Laughs] As we watch Ivan’s face, we see what he’s thinking, we hope. We hear what the people on the other end of the phone is receiving, so he has to sound like he’s in control and calm like you could rely on him in a crisis.

I noticed that Ivan is wearing a cause bracelet. I couldn’t recognize it.

You’re talking about the rubber bracelet?

That was a Help for Heroes bracelet. It’s a charity for servicemen and servicewomen in the UK. I also wore a Prince’s Charge bracelet and one for Lifeboat Association because they’re all relevant. Ivan’s the type of person who would reach out and have that kind of facility in himself, certainly with the builders that he works with in the film. There’s an element about him that’s sort of like the submarine captain in Das Boot, hence the naval sweater, the chunky knit jumper and the beard. He’s like Captain Haddock in Tintin. That was a light source, but I just pulled sources from everywhere. [Laughs] The lifeboat is actually quite important because Ivan is in the “boat” in the middle of a “storm” trying to hold it all together. Anyone can steer a ship in the calm, but it takes a specific person to steer a ship in a storm. Everything was very specifically chosen.

Nothing was extraneous in that car, down to the handkerchief in his sleeve. I remember my mom would blow her nose on her hankie and shove it down her sleeve, like moms do sometimes. Moms spit on hankies and rub stuff out just to make it worse for us kids. [Laughs] Holding a sneeze in during important conference calls is something you can’t see on the other side. No one knows where you are unless you’re in a bathroom that echoes. We’re just trying to create that juxtaposition between what’s happening and your private reality. Here I am having this very important talk and they ask me, “Are you listening?” I am listening, but I’m just trying to stop snot from flying out of my face. It’s inappropriate, but it’s what I’m doing at that moment.