Tye Sheridan at a Crossroads

Hollywood’s next big thing on his introduction to film, unconventional storytelling, and Steven Spielberg’s “most youthful spirit.” 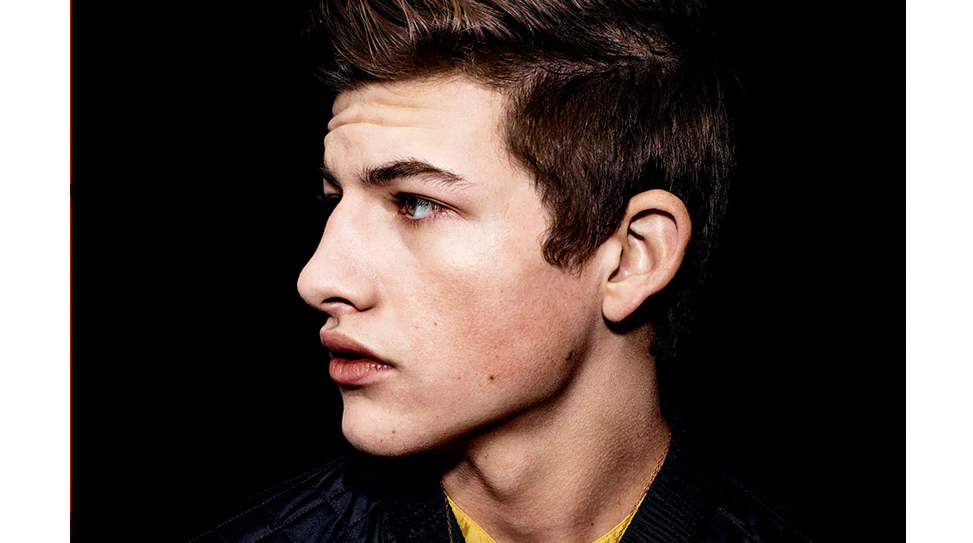 There was a point right after doing The Tree of Life, a three-year period, where I was pursuing acting and being sent out on auditions and not landing any roles.

This is how Christopher Smith’s choose-your-own-adventure film found its footing: “I’d just seen Disturbia back in 2007 and thought, ‘I’d missed those films! Where are those films? The old kind of classic story—the thriller—with the small idea of a guy trapped in a house?’ So [Disturbia] had just come out and I immediately wanted to think of something. Before I knew it, I’d come up with this split narrative and then I had the twist. I had this whole mathematical formula, before I had any characters or a story. Then I spent four years trying to think of what characters would populate it.”

Detour has all the hallmarks of a noir and its various offshoots: Law student Harper (Tye Sheridan)—a nice guy, everything considered—falls into the bad company of drug-dealing grifter Johnny (Emory Cohen) and his stripper tag-along Cherry (Bel Powley) during a binge session at a bar. We’ve now learned that Harper’s mom is on life support following a car accident and his stepdad Vincent (Stephen Moyer) may be to blame. Seeing dollar signs upon hearing this, Johnny offers Harper a deal: $20,000 to drive the trio to Vegas to knock off Vincent. Harper agrees—beset by grief and anger, and all that boozy haze—and wakes up the next morning to find Johnny banging at his door. Of course, Harper has since changed his mind about the whole thing. From there, Smith employs split screen to explore our anti-hero’s sparring paths: one where he’s home and beating himself up over what-ifs, and another where he hits the road and succumbs to his nefarious desires.

Our interview subject, Sheridan, is an “up-and-comer” in industry terms, but he’s not. He’s worn that crown since day one. At 10, Sheridan answered a local casting call and beat out 10,000 other Texan kids to star in Terrence Malick’s The Tree of Life, which obviously changed his life. Now 20, the guy has worked with giants in both artful indie circles (Jeff Nichols’ Mud, David Gordon Green’s Joe) and on Hollywood blockbusters (Bryan Singer’s X-Men: Apocalypse). His name will be household in 2018, taking the lead in Steven Spielberg’s dystopian-thriller Ready Player One.

Detour will receive a duel theatrical and VOD release via Magnet Releasing on January 20.

Christopher Smith is known for branding his own kind of cinema. He has a strong fanbase to support him and Triangle is a big part of that. Were you already familiar with his work?

Yeah, and I think Triangle was the film that really impressed me. It gave me the confidence in him that he could make this film. Not that I ever doubted that but, obviously, this film does something that’s unconventional. You really need someone who knows the story inside out. It’s great when you can work with a writer and director who’s as clever as Chris is on both sides of that equation.

I admire the film’s audacity to try something new and different. I wonder—what did all of this look like to you on the page? Was the narrative structure and the overall style tangible?

Whether you read the script or watch the film, it’s always really fun from the get-go because, once you get to the end, it makes you want to go back and look at it again. The intention was that the “Holy shit” moment would always be there and that will maybe make you want to revisit it and pick up on stuff that you didn’t pick up on the first watch. If you notice, Harper has this jacket, which is a really big part of the story. You just assume what’s under there without actually knowing, but if you do know what’s under there, then you might be able to link the two sides of the story together, instead of misconstruing that it’s just this split narrative. It was really fun to make. It was also challenging because we had to keep that in mind. We had to make sure that we were executing it properly and always remembered to have the jacket zipped-up at this or that point.

It’s such a statement jacket. It also looks like something lifted from Cyclops’ closet in X-Men.

[Laughs] Yeah, well, this was prior to Scott Summers, but that was the idea! I’m glad you feel that way because that’s how Chris and I felt before we made the film. We kept thinking, “He’s gotta have this iconic jacket, like the James Dean red jacket from Rebel Without a Cause.” It’s something that you take away. It’s also something that’s meaningful to the story. It conceals the major misconception in the film. We tried on so many different jackets… When we put the yellow jacket on, we were like, “Yeah! Yeah! It’s the jacket!” We got really excited when we found the jacket.

Detour has been described as a kind of choose-your-own-adventure experience. Have you heard about Steven Soderbergh’s upcoming project called Mosaic? Supposedly, viewers will be given the option to choose from different endings using an app or something like this.

So you shape the story to what viewers want to see? I think a lot of people are doing that now, especially in virtual reality where you’re starting to see these narratives that are choose-your-own-adventure. I’m not sure if it’ll stick or if it’s just a contemporary trend that’s kind of blowing up right now. Yeah, that’s cool he’s doing it. I’m interested to see it. It’s a TV series? An hour-long?

I think it’s a TV movie for HBO, actually. So—you’ve already worked with all of these important filmmakers in a fairly short span of time, starting with The Tree of Life when you were just 10 years old. What did acting mean to you then and what does it mean to you now?

That’s a really good question because I didn’t really watch films growing up, and when we did, we caught whatever was on TV. The nearest video store was like a 15 or 20-minute drive to the next town. Sometimes, my parents just thought it was annoying to go pick up a movie, so you didn’t have the opportunity to watch films. You’d watch what came on TV, but you had to catch it like right when it started, you know? [Laughs] I was really into sports as a kid. We were always outside doing something, like fishing or hunting. I grew up in Texas, by the way. When I did The Tree of Life, I was so young. I hadn’t even had time to ponder the thought of working in film. I knew from an early age that I wanted to tell stories, but I always thought that I’d be a writer of some sort. When I got into filmmaking, I just fell in love with it. From my second or third film on, it’s just been non-stop. It’s such an incredible medium from which to tell stories and reach an audience.

Do you imagine you might’ve ran away from acting had the first experience gone badly?

That’s a good question, but I don’t know because my first experience was so good and so much fun. There was a point right after doing The Tree of Life, a three-year period, where I was pursuing acting and being sent out on auditions and not landing any roles. I told my parents, “I really just want to focus on school and sports, and maybe this is something I’ll revisit later in life once I get out of school. But right now, I want to set it aside.” Right about that time, Jeff Nichols—well, really, Sarah Green—gave me a call. Sarah was a producer on The Tree of Life and also produced Jeff’s Mud, and she gave me my second opportunity to do a film. I fell in love with that script right away and really gone on with Jeff. If it weren’t for that time, I think I would’ve maybe put it on the shelf and not had many second thoughts about it. It’s strange how life works. The fact that I’m even here talking to you right now is—so many things have to line up to have that happen.

I know you guys shot Detour in South Africa and I read a story about your parents coming to visit you on set. I got the impression that they’re the antithesis of what stage moms and dads are like. What do they make of your career and your climb up the industry?

It doesn’t really interfere with our lives much, except that I’m away a lot to shoot. They’re happy for me and they’ve always been supportive of me. When I told them that acting was what I wanted to do, they were very accepting of that. My mom flew out to L.A. with me if I had a big audition. They make some sacrifices to allow me to do what I want to do. Without them, this wouldn’t have been possible and I wouldn’t be where I am. I always try to have them come visit wherever I’m shooting, whether that’s South Africa or Vancouver. It’s good to have them around. They keep you humble. They don’t get caught up in this world like some people have the propensity to.

I’m sure Ready Player One is shrouded in a lot of secrecy at the moment. Can you tell me something about Steven Spielberg that struck you in your personal observations of him?

Look—every person on the planet knows who Steven Spielberg is and seen at least one of his movies. His films were so influential to me as a kid, like E.T. and Close Encounters of the Third Kind. The chance to work with Steven Spielberg five days a week for a month… I always imagined him as like this old, veteran guy who’s just been doing this forever. He has the most youthful spirit and he still gets so excited when I ask him about filmmaking. I was kind of scared to ask him at first, but when I finally did, he would ramble on and on about this lens and that shot and this scene and blah blah blah. It was super cool for me. It was the best film school anyone can ever imagine.

Are you coming back to X-Men?

I haven’t really heard yet, but hopefully. Taking the next step with the franchise would be exciting.

I have my fingers crossed for you.