The It actor with the “It” factor on hearing news of her casting, misfit Bill Murray, and her next role playing opposite Amy Adams. 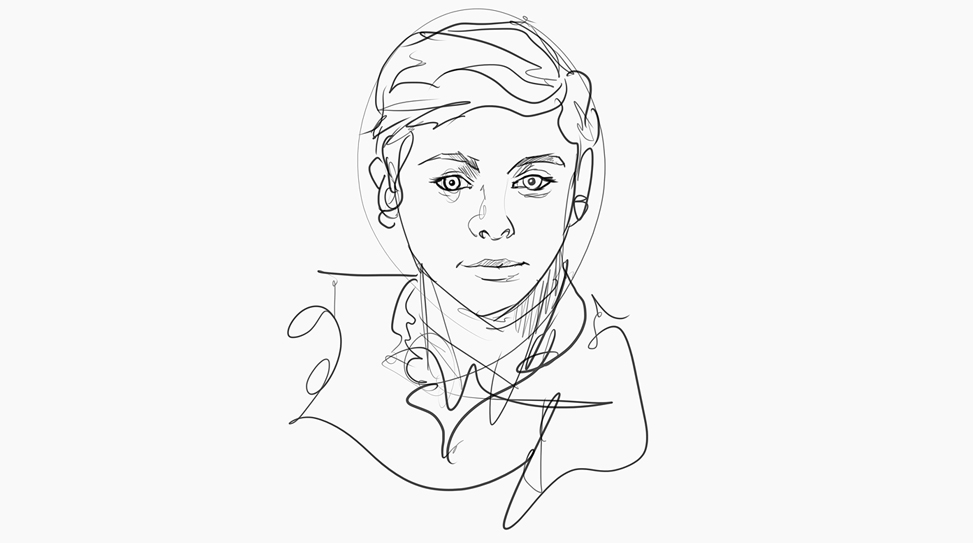 We would see Amy [Adams] on set or behind-the-scenes and she was always very sweet to us.

You saw It, you saw this coming.

The latest adaptation of Stephen King’s It broke genre records at the box office, pulling in $123.4 million in its first week domestically. It was the best opening day ever for a horror movie. It’s the second-highest three-day opening ever for an R-rated title behind last year’s Deadpool. Over the weekend, Andy Muschietti’s It scared up another $60 million, taking the number one spot once again. A hefty return on its $35 million budget, it’s seldom seen and bonkers, frankly.

Along with Bill Skarsgård as nightmare-fuel Pennywise, the film is primed to launch the career of Sophia Lillis. She’s Beverly Marsh, the lone female in a group of bullied misfits that band together to battle a batshit killer clown. But how did this 15-year-old get here in the first place? Born and raised in Crown Heights, Brooklyn, Lillis chanced into acting at age 7, thanks to her stepfather who needed someone to star in his film class project. From there, it was acting classes at Manhattan’s famed Lee Strasberg Institute, a role in a NYU student film, finding an agent, going on auditions…

Lillis recalls the day she found out about being cast in It with a striking laid-back attitude. “I was shopping with my mother for something to wear to middle school graduation,” she reveals. “It was kind of crazy because the audition process had taken such a long time but when I got the role, they wanted me to leave for Toronto pretty much right away.” She didn’t make it to graduation.

Next up for the floating newcomer is the HBO adaptation of Gillian Flynn’s novel Sharp Objects, a crime drama series co-created by Marti Noxon (Buffy, Angel) and directed by Jean-Marc Vallée, who just took home a directing Emmy for Big Little Lies. About a reporter (Amy Adams) confronting past psychological scars when she returns to her hometown to investigate a gruesome murder, Lillis plays Adams’ younger self via flashbacks and dreams. “Most of my scenes were with my on-screen sister played by Lulu Wilson and she became my best friend,” she went on. “We would see Amy on set or behind-the-scenes and she was always very sweet to us.”

HOTTEST POP STAR: My favorite music is from the eighties. I love David Byrne. He’s such a cool musician and artist.

HOTTEST DEAD ICON: Giulietta Masina. She was in a lot of Fellini’s films like La Strada and Nights of Cabiria. She’s an amazing actor. You can’t stop watching her when she’s on the screen and she played these odd, quirky characters. She’s also so unusual looking—not a typical “pretty girl” actress.

BEST RECENT PURCHASE: The game Animal Crossing. I’m addicted. I played it all the way home from L.A.

THE LOSERS’ CLUB CASTMATE TO BE STRANDED WITH ON A LONE ISLAND: It’s a tough decision. Maybe Wyatt [Oleff]. He’s the first to answer my text messages. Also, he hardly likes any foods so there would be more for me to eat.

NECESSITIES YOU NEVER TRAVEL WITHOUT ON SHOOTS: My ukulele, my camera, and a giant pillow for the trailer.

YOUR HOME IS BURNING DOWN, WHAT ARE YOU GRABBING? My phone, my phone charger. Maybe my cat.

BEST ADVICE YOU’VE RECEIVED: My first grade teacher once said, you can‘t do better than your best. And if your best isn’t good enough, practice.

WTF ON-SET MOMENT: When I was filming Sharp Objects, I was running through a field of tall grasses and I lost one of my shoes. I kneeled down to look for it, but I guess to the crew it looked like I’d just disappeared. I guess they were a little nervous because, apparently, there were snakes in the field. But everyone laughed when I popped back up holding my shoe over my head.

SOMETHING MOST PEOPLE DON’T KNOW ABOUT YOU: I like to eat lemons whole.