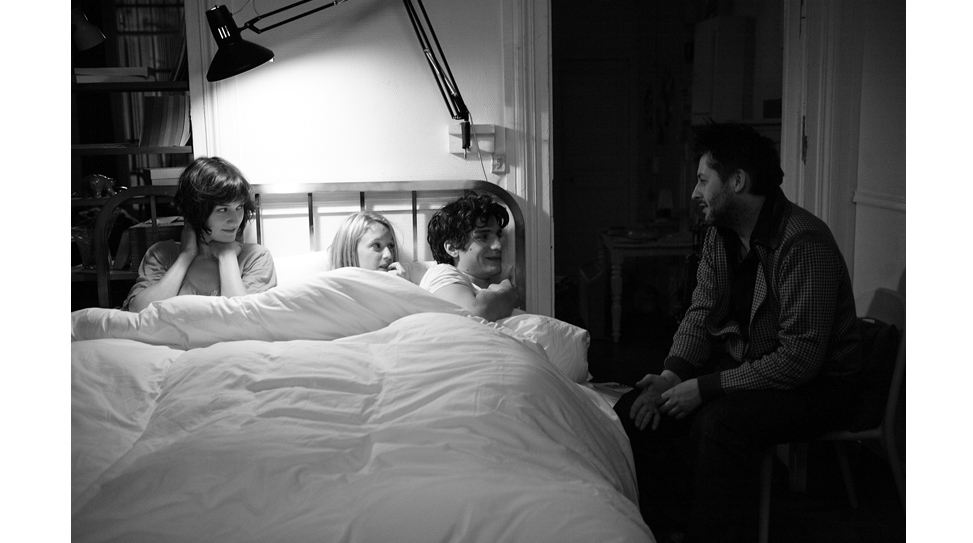 Christophe Honoré on the set of Love Songs with Chiara Mastroianni, Ludivine Sagnier, and Louis Garrel.

“I come from a little village in a French province called Brittany. It’s the kind of village where, if you’re fifteen and you say that you want to become a filmmaker, they kind of laugh at you,” Christophe Honoré revealed to Anthem back in 2012. “When it’s your family, they don’t want to laugh in front of you, but behind your back, they think you’re chasing some sort of fantasy.”

Honoré has come a long way. French critics have propped him up as the “spiritual heir” to the French New Wave—an even bigger triumph considering he got his start as a writer at Cahiers du Cinéma. He was cognizant, too: “I was influenced by the fact that people like Jacques Demy and François Truffaut had been film journalists prior to becoming filmmakers. There’s this feeling in France that, before filmmakers become filmmakers, they were first and foremost cinephiles. When you talk about other people’s films, you’re already heading toward making your own films.”

The helmer-scribe’s body of work is tightly bound, often exploring intimate dramas about families in crises. From a mother forming an obsession with her son’s best friend following the death of her child in Après lui (2007) to a race through four decades of sociopolitical turmoil—the Soviet invasion of Czechoslovakia in ’68, the specter of AIDS, and 9/11—propelled by a mother and daughter’s misadventures in love in Beloved (2011), grief is an important aspect in Honoré’s work.

His ninth feature, which premiered in the Venice Days sidebar at the 2014 Venice Film Festival, is something quite different. A modern-day retelling of Ovid’s magnum opus, the Metamorphoses, Honoré’s same-titled film chronicles a young girl named Europa who’s seduced by a magnetic stranger named Jupiter, before embarking on a mythical journey to a land of powerful gods.

Metamorphoses has a limited run at Facets Cinematheque in Chicago from April 21-27.

The very first time I met you back in 2012, we discussed your musical Beloved and touched on your origin story. What lessons do you think you’ve learned since that particular film?

I’m not sure that I’ve learned a lot of things, movie after movie. I don’t think it’s a question of learning. Maybe I’ve grown more curious, and sometimes braver, in trying to make movies that could surprise me. But of course, with every work and over the years, we like to imagine that we’re becoming more and more competent in what we’re doing. I’m just not sure that’s the case when it comes to creativity. As a director, I always try to find myself in situations where I don’t know: “I don’t know how to do this.” I want to remain uncertain. I want to maintain a kind of innocence.

You have repeatedly worked with the most recognizable French faces and one thing that makes your films unmistakably yours are your muses. What’s your approach to casting?

It’s correct that I very often work with the same actors like [Louis] Garrel or Ludivine [Sagnier] or Chiara Mastroianni or Romain Duris. I made a lot of movies with them because I maybe have hopes to make cinema as a theater director with the idea of troupes at a company. I like the idea of that. It’s not really a family, but actually more like a theater troupe. Although, sometimes, I really like to work with people that aren’t at all like actors. With Metamorphoses, for example, it’s people that I meet on the street and try to cast in my movie. I like these kinds of things because it can give your movie a lot of humanity. I really wanted Metamorphoses to be like a portrait of French youth today so I tried to work with a lot of amateur, non-professional actors. I find it advantageous to have their beauty and their stories—and it’s very different. My next movie [Plaire, baiser et courir vite] is with Louis Garrel. I’m very happy to work with him again. We’re both older now.

I’ve always been a fan of French cinema and what attracts me to your work in particular is that you have a singular voice. When you go sit down to write, do you feel a lot of freedom?

We’re very lucky in France. We make movies for the screen, but we make movies as writers. So, like you said, we’re very personal. Of course, we need to make money as well and try to propose movies that will have a certain audience. But it’s right that we’re very lucky and privileged to work in cinema with tools that will shape stories in a real, artistic way. You know—I have the impression that we’re in the last years of the golden age of artistic cinema in France. I think it’s now finished.

You worked with Isabelle Huppert on your second feature Ma mère in 2004. Needless to say, she had an incredible year with Elle. How do you feel about her crossover potential?

Isabelle Huppert is of course a great actress. I can understand that she’s very well known here in Europe and maybe less so in America. I wasn’t surprised that she didn’t win the Oscar because I think [Paul] Verhoeven’s movie is vicious. I really liked the movie, but I think that kind of movie is very difficult to champion in America. I don’t feel that it was anything against Isabelle. You know—there’s something that’s very different for French filmmakers now. We know that we’re in the minority. Other countries are less interested in our work. For a lot of people, French cinema is very much about the New Wave in the ’60s and now it doesn’t really exist. We’re not the leader now, in an aesthetic way. In reality, we can continue to make movies because we’re in France, but if I was Spanish or German or English or more American, I could never make the movies I like to make. French cinema is very small. We have no power in the world, compared to an industry like Hollywood. I’m not sure that the new American filmmakers today have interest in French cinema the same way that [Martin] Scorsese or [Francis Ford] Coppola did when they were young.

Can you recall the last movie you saw that you thought was really great? A recent movie.

Well, the last European movie that I saw this year was Toni Erdmann. I find this movie incredible for its script and the actors. My friend—it’s good news that the best European movie this year is German. After Wim Wenders and after Werner Herzog, German cinema is small and there aren’t many movies. I’m very curious to see what other German movies will come after Toni Erdmann. It’s a very free movie. Melancholic. I don’t understand why it didn’t win any prizes at Cannes.

You’re very much a part of the Cannes’ inner circle, in the sense that you’ve premiered films at the festival and they will continue to invite you back. The festival is coming around again.

Maybe Cannes is one of the reasons French cinema still exists in the world cinema landscape. To have the biggest festival in the world is very important, of course, for French cinema. It’s a great thing, but at the same time, it’s difficult for French filmmakers because Cannes is maybe the only star in France. You have Brad Pitt. You have Angelina Jolie. You have a lot of actors that are stars. In France, our star is Festival de Cannes, and like every star, Festival de Cannes is a diva. [Laughs] It’s fascinating, but in the same way, disappointing for the filmmaker. Of course, I can’t complain because a lot of movies were shown at the festival and it’s an important play for me.