From the Archives: Edgar Ramírez

A look back at our intimate conversation with the Venezuelan actor who’s scaling new heights as a leading man in 2016 and beyond. 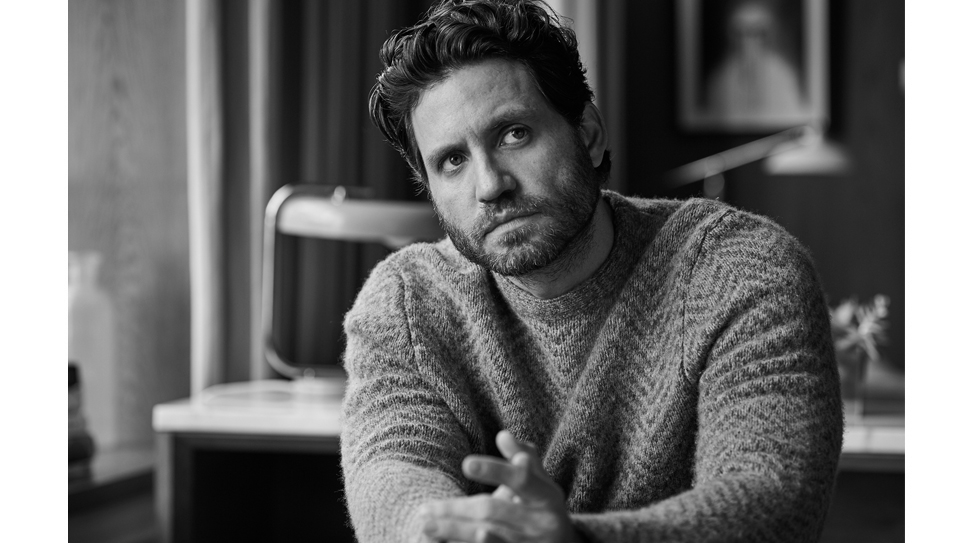 When you travel as much as I do, you tend to gravitate towards your place of birth. You want to hold onto something from your culture so that you don’t get lost.

It’s shaping up to be an even bigger, brighter future for Edgar Ramírez in 2016 and beyond. The 39-year-old Veneuzuelan actor isn’t exactly a household name yet, but you’ve most certainly seen him in a handful of films. Call it what you want but Ramírez has an impressive pedigree tracing back to his memorable performance as Choco in Tony Scott’s Domino in 2005. He has since appeared in such films as Paul Greengrass’ The Bourne Ultimatum, Steven Soderbergh’s Che: Part One, Olivier Assayas’ Carlos, Kathryn Bigelow’s Zero Dark Thirty, and David O. Russell’s Joy.

What’s next for Ramírez? A leading role as legendary boxer Roberto Duran in Jonathan Jakubowicz’s Hands of Stone with Ellen Barkin and Robert De Niro, Stephen Gaghan’s Gold with Bryce Dallas Howard and Matthew McConaughey, Tate Taylor’s The Girl on the Train opposite Emily Blunt, and another as-of-yet untitled collaboration with Jakubowicz and De Niro.

[Editor’s Note: The following interview was originally published on October 2, 2010.]

Following a string of supporting roles in testosterone-fueled blockbusters like Tony Scott’s Domino, Paul Greengrass’ The Bourne Ultimatum and Steven Soderbergh’s Che: Part One, Edgar Ramírez is kicking his career into high gear with the arrival of Olivier Assayas’ Carlos, in which he takes on the titular role of the enigmatic and equally dogmatic Ilich Ramírez Sánchez a.k.a. Carlos the Jackal. Clocking in at a leg-numbing five and a half hours, Carlos is a thrilling, epic scale dramatization of the exploits of the globetrotting radical Marxist terrorist who left of trail of shootings and bombings across Europe and the Middle East in the ’70s and ’80s, with the most notorious incident involving a hostage situation at the 1975 OPEC Conference in Vienna.

Having screened Out of Competition as a standalone film at the Cannes Film Festival, and more recently at the New York Film Festival, Carlos is set to air on the Sundance Channel as a three-part miniseries prior to opening in select cities as a full-length presentation beginning on October 15.

You’re still fairly unknown over here in the States, yet you’ve already worked with some of Hollywood’s biggest directors. Is that weird to think about?

I feel lucky and privileged to have worked with such amazing directors. They’re all geniuses and so talented. They’re real sweethearts as well. It’s inspiring to work with creative people who aren’t afraid to challenge themselves and invite other people to come along on their adventures.

I first noticed you in Domino. You played Choco, which I believe was your first role in an American film. How did that one come about?

That’s right. They screened a Venezuelan film that I was in at a film festival in Los Angeles and the casting director of Domino happened to see me who then presented me to Tony Scott.

That’s the best “audition tape.” It speaks volumes when people go out of their way like that.

It was really flattering! I was really surprised by that because it was the first time the film screened outside of my country. That was actually my first film experience, which then led me to Domino.

Did you study acting?

No, I actually studied journalism and specialized in politics.

What were you planning on doing with that?

I wanted to live here in New York City and work at the United Nations. I wanted to be the UN’s Secretary-General or something like that. That was sort of the dream I wanted to realize.

What made you switch gears and take this dramatic turn to acting?

It was Guillermo Arriaga, actually. He saw me in a short film that I did sort of as a favor. My friend was looking for someone with my kind of physique. It turned out of be very successful. Guillermo said, “I didn’t know you were an actor!” and I told him, “I didn’t know either!” [Laughs] I’d be lying if I told you I dreamed about becoming an actor as a kid. But I wasn’t indifferent to the world of performing arts. I was always very attracted to it. I just never thought about it as a career.

I met Guillermo last year when he was promoting The Burning Plain. One thing that really struck me about him was how warm and gentle he is. He has an incredible spirit.

Absolutely. He’s one of the most original storytellers in the world right now.

Do you guys still stay in touch?

We recently spent a weekend together in Paris during a film festival. We’re very close. We haven’t worked together on a film yet, but who knows what might happen in the future?

Your father was in the military and you traveled a lot. Was that tough on you growing up?

I liked it! It was harder on my sister. Traveling all the time, meeting new people, and adapting to new things—it worked for me. I guess that brings us back to working with different directors because it’s all about adapting. I’m very open to change. I deal with change very efficiently.

When did you leave Venezuela?

It was back and forth, actually. I’d leave and then come back. It was always in and out.

Having moved around so much like you’re saying, how would you describe your relationship to Venezuela? Will it always be home or do you see yourself more as a global citizen?

When you travel as much as I do, you tend to gravitate towards your place of birth. You want to hold onto something from your culture so that you don’t get lost. I’m a very proud Venezuelan. But I’m also a citizen of the world. I love different cultures and people from other backgrounds.

If you go online, you can see that Venezuelans take immense pride in you.

It’s very touching. But I’m not totally aware of things like that living in London. You just do what you do. The fact that we’re having this conversation right now, and knowing that thousands of people will then go read it and become a part of it in some way, is magic I think. It’s very touching to feel people’s appreciation and enthusiasm for what you’re doing.

Did the traveling and your command of multiple languages help you bag the role of Carlos?

Yeah, that definitely helped. The character called for an actor who was perfectly fluent in French, English and Spanish—at the very least. This sort of global education that I had only helped because that’s what the character is, essentially.

The OPEC raid happened when you were just two years old. Did you know much going in?

I think I had a rough understanding of that whole thing when I was in primary school. I had a very vague understanding of it: this very crazy, mysterious Venezuelan master of disguise who was hijacking planes and bombing his way through Europe and the Middle East. It just felt like something very distant and faraway. Carlos left Venezuela when he was 17 and he never went back. It’s not like we grew up with Carlos as a constant memory or presence. He was lost and fleeing from justice for so long that it made sense that we wouldn’t hear from him very often.

What are your thoughts on criminals who take on a celebrity status like Carlos or Jacques Mesrine? Do you think it’s harmful to society?

I think it really depends on what your take on celebrity is and what it means. “Notoriety” is a term I prefer because “celebrity” already gives a moral or emotional judgement to notoriety. You could make the connection between “celebrity” and “celebrate,” where it has something to do with celebrating someone you know or celebrating fame. I think that’s what triggered Carlos’ tragedy because he had a thirst for fame and recognition. You could see this movie as a metaphor for the struggle between the pure convincing will to change the world on one side, and the obsession for fame and recognition on the other. At a glance, these look like polar opposites but they actually coexist in perfect balance in a person’s behavior like in the case of Carlos. It’s idealism and individualism coexisting in one character.

Didn’t Carlos file a suit against the filmmakers for defamation of character?

Yeah, but that was before the film was even made.

Do you know if he’s seen the film?

I’m sure he’s seen it, but we haven’t heard from him.

Is it always harder to portray a historical figure as opposed to a completely fictional one?

It really depends. I’ll break down my answer into two parts: One, if you’re portraying a public figure whose behavior, demeanor and gesture is public knowledge, it’s a challenge because people have a preconceived notion of what the person is like. However, on the other side, you’re recreating life because that person only existed once. Just look at what Helen Mirren did in The Queen. Beyond imitating or impersonating Queen Elizabeth II, she created a living character. It’s not all about imitation. You see imitators walking around Hollywood Boulevard all the time and there’s no creativity there. In the case of Carlos, he was a mysterious figure. There was no way to imitate him because nobody really knows what he’s like. So what we were aiming to do was to give a human face to the myth.

You also gained weight for this role, which is fun for me to watch, but I can’t imagine how much fun it would’ve been for you as an actor.

I just looked at it as part of the process. That was one of the few things that we were absolutely sure about from the beginning because Carlos is fat if you look at the limited number of photos available from the end of his life as a free man. Doing that was just respectful to the story and to history. I think it also helped to show the emotional and ideological degradation of the character.

Did your impression of Carlos change during the course of making this film?

When you recreate someone’s life, it’s a different thing. It’s a creative process and it takes on a life of its own. When I took on the role of Carlos—and I’m being very honest here—I didn’t have a specific idea as to how this person should be. I tried to live and feel the experiences of the character step-by-step. I was discovering the character as I was portraying the character. At the end of the movie, I had an idea of who this guy was, but not in relation to the real Carlos. No one will really know who the real Carlos is. The name Carlos is itself a fabrication—it’s a nom de guerre. It’s an image created by Ilich Ramírez Sánchez, the secret services at the time, the media, and the government. It was never our intention to create a biography.

I’m not sure. I just want to surprise myself. I’m waiting for a project that will really speak to me. There are no criteria. I don’t see my career as a checklist. I want to be mesmerized by materials and I’m excited to see what will come next.

You gave an interview on a news program a few years ago to promote Vantage Point and you mentioned having wanted to direct. I think you said something along the lines of, “But I feel inexperienced.” Are you ready now?

Same answer: I’m not ready yet.