The Swede has burst out of the gate and is already running with the best of them. Here the siren talks touring, American pop, and those entirely unexpected Rihanna comparisons. 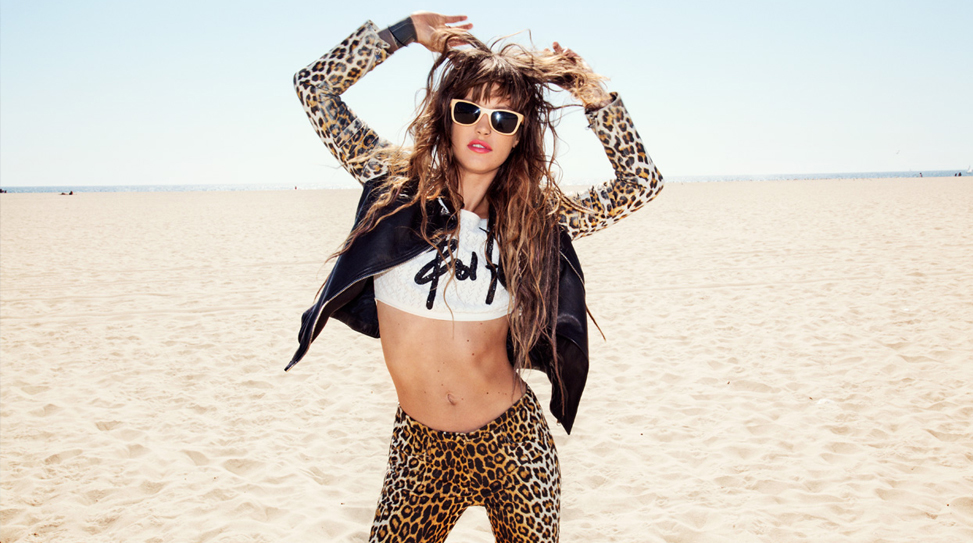 I get inspired by people who dare to be seen, who have the courage to be colorful when everything else is black...

DOWN ON LIFE, ELLIPHANT, KATY PERRY, LIVE TILL I DIE, MUSIC IS LIFE, RIHANNA, TWIN SHADOW

There are those rare people out there that intimidate by the sheer virtue of their existence. It’s not that they have an abrasive nature about them or an acerbic way in which they negotiate life. Quite the contrary, Elliphant, known by her birth name as Ellinor Olovsdotter, just seems to have everything going for her. The Swede first gained international acclaim back in 2012 when she released her debut single “Tekkno Scene” via Record Company TEN. Sounding not unlike the twisted illegitimate offspring of MIA and Diplo, her unapologetic and in-your-face Jamaican influenced dancehall pop soon prompted the world to sit up. With each consecutive track she puts in our ears, it serves as a reminder why we need to keep our eyes on Sweden’s pop game right now. Elliphant has just wrapped a North American tour with Twin Shadow and saw the release of her latest single “Music is Life” featuring reggae artist Ras Fraser Jr.

How do you account for the amazing artists and music that consistently trickles out of Sweden? There must be something in the water, no?

I think it has to do with the fact that we have a melodic and clear language. We have always invested in culture and creativity and we get a lot of influences from other cultures and countries—we are a modern people. It is easy to get out there and get noticed in Sweden since it is such an organized country and the people have quality within them. Sweden rules!

How did this all begin for you? When did you start recording music professionally?

For many years, I thought it was fun to jump on different music projects in a naive and amateurish level and I’ve done many live shows with DJs. I started recording when I got my first Mac. I recorded in Garageband and managed to put together some proper songs. When I met Tim, my DJ in Paris, that’s when I started to take this seriously.

You’ve been on tour with Twin Shadow. How did you guys pair up?

They posted applications to different bands, including us, asking if someone wanted to join them on the tour. We didn’t know much about [George Lewis Jr.] at the time, but we thought that it sounded nice to travel in a tour bus with them in the US. We were new at this and didn’t have much experience, so we thought that this was a good experience. They are a fantastic band creativity-wise with awesome management. We gained a new family over there. They are all fantastic musicians and lovely people. We had a lot of parties and it was fun to be able to see all those places.

What has been a particularly memorable gig so far on tour? Has anything strange happened?

The most memorable gig was my first own gig at Flash Lounge in New York. It was epic because it was my own. I had been on tour with Twin Shadow for a while and was warmed up from playing with them. It was incredible. I also had an amazing gig in Austin. In New Orleans, we played at a small bar, which was a fantastic place and very special. We got a lot of love in Chicago and Houston.

I noticed that you played at the Great American Music Hall in San Francisco. I love that venue! Do venues affect your sets?

Yes, of course. Different venues have different vibes, acoustics, lighting and sound systems. I have a very simple set up when I do promotion set ups for this album. For me, the Great American Music Hall isn’t the ultimate venue for me since my DJ set is more suitable for small clubs, but it was great seeing Twin Shadows performing there. It was one of the first places we played at during our tour, so…

You’re on a rapid-fire touring schedule, but do you get to go exploring at all in these different cities? For instance, what did you do in Minneapolis when you played at First Avenue? I grew up there, which is why I’m focusing on that venue.

Unfortunately, I didn’t have much time to walk around town in Minneapolis. My DJ, Tim, took a walk though and said that it was one of his favorite cities. The venue we played at was amazing. We got treated so well that we felt like princesses and princes. It felt really good being there, but we didn´t have time to see much.

Do you enjoy being in the studio as much as touring and performing live on stage?

Well, those are two different things. As humans, we need to have both input and output and I think it´s the same thing here. Luckily, I have been on tour and able to get all my energy out when I needed it. I can´t say I´ve really had the whole studio experience since I´ve always combined a full time job with work in the studio. I’m looking forward to be able to dig down and just work in the studio, but right now, I enjoy being able to develop my live performances.

Can you walk us through your songwriting process? Are you ever in a situation where you have writer’s block or does it all come together pretty naturally?

You only have a certain amount of energy when you’re on tour and put a lot of effort into preparing for the shows and stuff. It can get difficult to write new songs. You are so stuffed with other things and what comes out is uncontrollable. I´ve scribbled down some words of wisdom on my body and on small notes. Usually, I write things down on my phone, but since I lost it in New York, I haven´t been good at writing it down. I have some small notes with directions, but I usually write lyrics directly to beats.

What normally inspires you and how does that end up in your music?

Humans inspire me. Our behavior and how we function is interesting. I’m very spiritual and think a lot about what we’re really doing, the meaning of life and what’s good and what’s bad. I challenge society with my music that includes thoughts about how things could be.

What were the circumstances that led you to write “Live Till I Die,” for instance?

I wrote most if it when I was 18 years old on one of my first travels to India. I had eaten mushrooms and was laying on a beach when some of the words came to me. I later wrote the first lines of the song when the words popped up in my head to a beat. I remember my sister telling me that we should express ourselves more like Dalai Lama, who once said, “They live as if they will never die and die as if they’ve never lived.” That’s how “Live Till I Die” became the refrain.

That was quite a shout out you got from Katy Perry for the “Down On Life” music video. Are you a fan of American pop?

I appreciate it since I care about and value all kinds of music. I can´t say I listen to American pop much myself, but since I´ve spent time over there it has gained a bigger place in my conscience and I´ve started realizing all the hard work they do. I feel reverence and respect for that kind of music even though I’m not a big fan.

How are you taking all these Rihanna comparisons you’ve been receiving?

I’m a bit surprised by that because I would never have thought that people would think that we were alike. I think she is a gifted and talented singer and I’m not. What I do is more experiential and I challenge myself. Luckily, I’ve gotten the possibility to do that. Rihanna is a more elaborate and professional artist. I see the comparison as a compliment since people like her. It might be because of the way I use the words where it sounds as I have a Jamaican Patois dialect.

Can you describe your style? What are some essential items in your wardrobe?

I’m a hippie-kicker with an influence of aerobic teacher from a suburban bum.

Are you currently working on a full-length? What can you reveal?

I’m constantly working on new things, but I can´t reveal anything yet.

What has been the most meaningful thing anyone has ever said to you?

I usually never remember anything people say, but people inspire me every day, both by small and big things. I can’t remember anything in particular, but people change my life every day. I consider many things based on how people will be affected by it. Something that is right for one person might be wrong for someone else. I get inspired by people who dare to be seen, who have the courage to be colorful when everything else is black or who dare to be black or white when everything is a grey area that the society tries to put us in. It doesn’t matter if they are bank robbers or rappers in the suburbs—they still inspire me.

Here’s a hypothetical scenario for you: If you somehow chanced on someone who had never before listened to music in their lifetime—a completely blank slate—what five songs would you put on his or her mixtape to get them started?