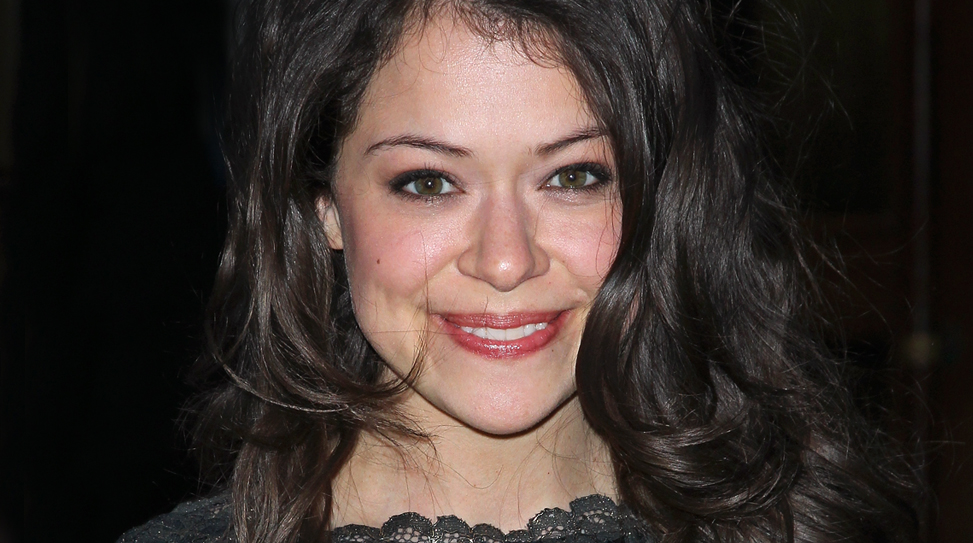 Claire is the girl that I would see in class, wishing I was bad ass like that... But not before I finished my math homework.

BBC America has found its leading lady in Tatiana Maslany. The newly acquired star of Orphan Black, an acclaimed series that premiered just 2 months ago and now green lit for its second season, Maslany has continued to display some major acting chops. Hailing from Canada and of a Ukrainian, Polish, German, Austrian, and Romanian descent, the 27-year-old fakes one hell of a British accent on that show. In her latest film Picture Day, Maslany plays Claire, a rebellious youngster repeating the 12th grade–her “victory lap” as she calls it. Sexually precocious in ways that scares her contemporaries, including Henry [Spencer Van Wyck], a schoolmate that she had once babysat, Claire is not yet willing to take the leap into the world of adults.

Picture Day is available to view on iTunes, DVD and VOD on May 21.

Growing up in Regina, Canada, how do you think your adolescent years might have informed your proclivity for the arts?

Well, I started dancing when I was really young at the age of 4. It just seems like performance was always a part of my life. Maybe that impulse was rooted in my desire to be the center of attention or something… It was when I was 9 that I started acting in community theater, so I sort of fell ass backwards into film and television. I really don’t know how all of this happened, but I was fortunate enough to start booking jobs. My parents aren’t actors or come from the industry at all. My two younger brothers and I were artists in our own way as an animator, actor and singer. All I can say is that acting became the love of my life and it’s what I want to continue doing.

Since your parents didn’t introduce you to this industry, were they very supportive when you started taking flight as an actor?

Initially, when I was younger, they were like ehhhh… [Laughs] They definitely wanted me to pursue something that I could fall back on like journalism or some other concrete, tangible career path. Acting was colossally up in the air according to their philosophy. It’s so hit-and-miss. Acting is really difficult to pursue professionally and keep the inflow of work consistent. They just wanted me to be OK. The more that I got work, the more they saw how much I loved doing it and how much I was committed to it… They’re so supportive of my decision now. It’s a world that none of us are familiar with, but they’re very much behind me along the way.

What are some qualities about Claire in Picture Me that you related to right off the bat?

I really loved how she was guarded and I could read on the page that she was really vulnerable in spite of her dominant persona and the cool factor that she had in the eyes of others. That’s what I related with. The vulnerability and the loneliness. That contradiction gave Claire a lot of dimensions. Claire is like the person in high school that I wish I could’ve been, but wasn’t. It was so cool to play someone that’s the total opposite of what I was. She’s unashamed of her sexuality and puts it out there as if it comes so naturally for her. Sex is just how she connects and relates to people. I think it’s an important subject that a lot of people can relate to.

The scenes between Claire and her mother were fairly brief in the context of the entire film, yet say so much about who Claire is. Her mother’s life totally informed who she became.

Totally! You just see this absent mother who’s there for Claire physically, but not there in any other way for her. You can see that Claire is very much her mother’s daughter in those moments. She walks around the school and down the street, and she always has her headphones in. She has removed herself from the world, which I think sums up everything about how she gets by.

Claire is a “super senior” whereas you were quite a good student from what I’ve heard.

I wanted to get everything right. I was super nerdy and academic. I got so much satisfaction out of getting good grades. Claire is the girl that I would see in class, wishing I was bad ass like that… But not before I finished my math homework. [Laughs]

In the film, Henry has a “Claire” box where he keeps his momentos about you. It’s strangely sweet, until he stacks it on top of his other boxes labeled “buttons” and “basketball cards”. What’s the strangest thing a boy did to get your attention in real life?

[Laughs] Oh my god. I had a poem written for me once. In fourth grade… It’s so embarrassing that I remember this, but it was important to me at the time. This boy that I had a crush on, and he had a crush on me, drew me a page of random Ren & Stimpy doodles. They were like farting and loving bums or whatever. I was like, I’m in love! [Laughs] That was the way to my heart.

I noticed that Kate [Melville] executive produced Being Erica, a TV series you starred in. Is that where you guys first met?

No, actually. I met Kate for the first time when we grabbed coffee to talk about Picture Day. I had never met her before that.

How did that first conversation go over?

I guess we were just bouncing ideas off each other. Kate told me what she was aiming for and the references she was working with. She was very much into the mumblecore movement and recommended movies that I should take a look at. She provided a lot of insight into that world for me. That kind of improvisational approach totally turned me on and got me excited. I knew it was something that I wanted to be a part of. A lot of the conversation had to do with our overall process and how Claire should be portrayed, not to mention her dynamic with both Henry and Jim [played by Steven McCarthy]. She wanted to clarify things to make it more specific. What’s great about Kate is that she has this incredible openness about everything.

What stage of production is Cas & Dylan in right now?

I think it’s going to be picture locked pretty soon. I don’t know when it’s coming out.

I had no idea Jason Priestley had such an active directing career until I started looking into that film. What’s he like to work with?

Jason is awesome! It’s his first feature, but he’s been doing a lot of directing on television. He really gets comedy and timing. He was so fun to work with. He’s such a dude. [Laughs] He’s easy to chat with, hang with, play with, and collaborate with. I feel very privileged to work with him and Richard Dreyfuss on that one. I’m just sitting there in awe of their stories and their experiences. I’m totally grateful and overwhelmed that I’m there. I’m soaking it in.