The star of Berlin Station on the “extraordinary everyman,” his directing ambitions, and the espionage series’ possible second season. 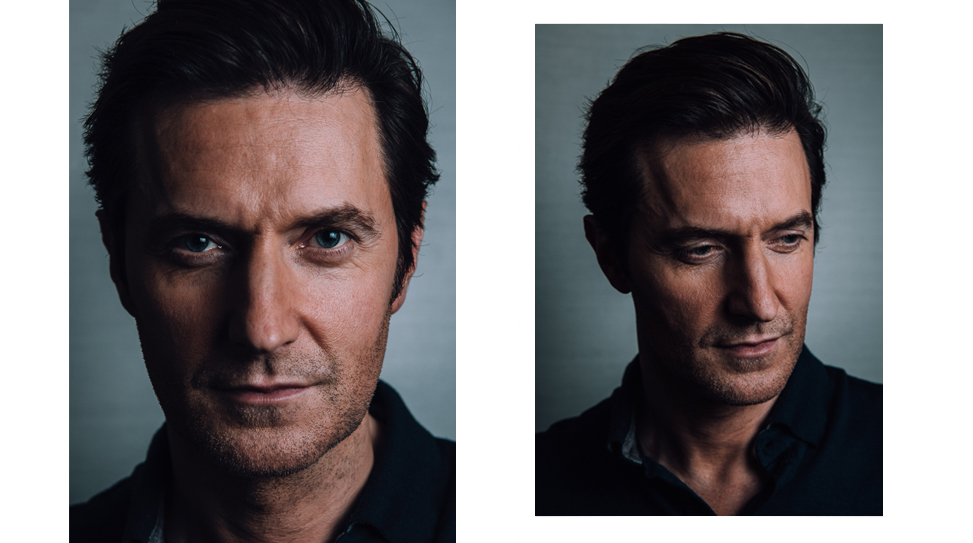 Richard Armitage at The London Hotel in New York City.

Richard Armitage at The London Hotel in New York City. 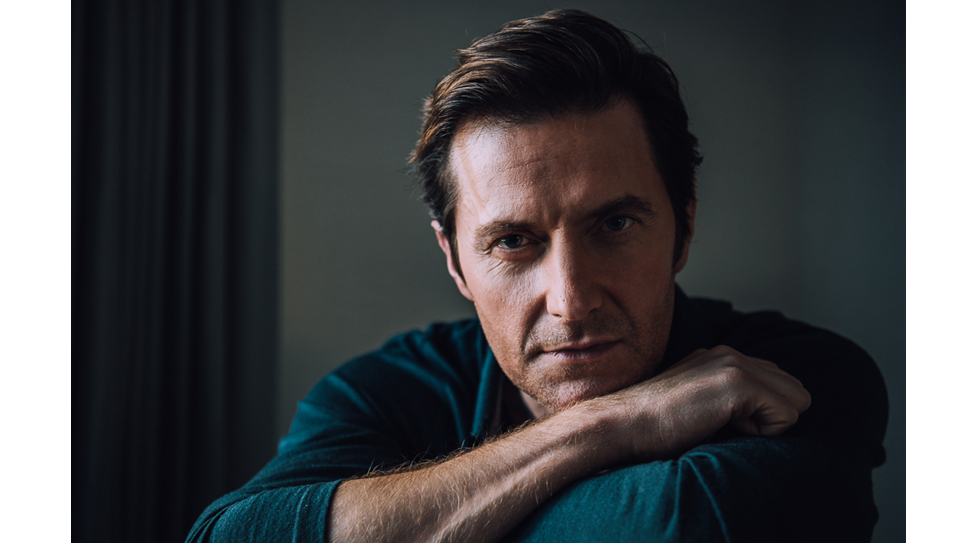 I was up for the part of Pennywise. There’s probably an audition tape floating around of me naked going crazy.

“I was up for the part of Pennywise,” Richard Armitage playfully recalls. “There’s probably an audition tape floating around of me naked going crazy.” The 45-year-old Brit is of course talking about the one terrifying sewer-dwelling clown, and Andrés Muschietti’s It, a new film adaptation of the Stephen King novel set for a 2017 release. Bill Skarsgård—Alexander’s 26-year-old brother and one of Stellan’s several stallions—has since assumed the role, but more perilous to us, this revelation came to light after we’d wrapped the interview and, frankly, that’s all we have to go on.

Going with the digital reality of launching new shows in the cluttered marketplace of today, Berlin Station has already released its two first episodes—embedded below—ahead of its linear debut.

Berlin Station makes its premiere this Sunday, October 16 at 9 PM ET/PT on EPIX.

I didn’t realize until after watching the first two episodes of Berlin Station that Michaël Roskam directed those. It was a real “holy shit!” moment because, obviously, “Bullhead.”

How lucky, right? That was one of the main things that kind of pulled me to the show. Looking over the script, I was trying to find a really current, relevant, political, and action-based thriller. It’s kind of exactly what I was looking for, but I was still hesitant. I just didn’t know because it was the one script there. But as soon as I heard that Michaël was directing it, I was like, “Yeah, okay,” and got on the phone with him. That got the ball rolling. He was a big catalyst for me.

When you saw the first finished episode, how did that line up with what you had imagined?

It was really different, actually. We spent a long time, probably through all of the ten episodes, not really knowing what show we were in, which I think is a good thing. I feel like these characters are in such an uncertain world. It feels like they’re skating on thin ice the whole entire time. I was kind of glad that I didn’t know the tone of the show and the look of the show. I hadn’t seen a single moment of footage right until the very end—in single stills. So when I saw the first cut, I was like, “Okay, so it’s really not what I thought it was gonna be. It’s taking its time. It’s feeling these stories out with good time.” I thought it was gonna be a much choppier edit, but I’m glad it isn’t. I’m glad that the narrative is there to be pieced together, rather than it sort of slamming into you.

You mentioned there being only one script when you boarded. When you sign on for the entire ride, so to speak, do you think you would’ve benefitted from knowing the season arc?

Sometimes, yes, sometimes, no. It doesn’t always help, actually. For instance, The Hobbit was of course totally different because I was an avid Lord of the Rings fan already. I was a Tolkien fanatic so I kind of knew the universe that I was stepping into. Being aware of that was good because I was able to then play against the stereotypical idea of what that world is like. But that’s just perspective, too. It’s still a surprise to me that I was ever cast as [Thorin in The Hobbit], although I understand why. It’s weird, isn’t it? Because until I saw myself on film, I never realized that I’m quite big. We don’t see ourselves in the same way. It always shocks me when I see myself on film like, “I’m quite taller than that person” or “I’m quite broader than that person.” Again, it’s another thing that I’m kind of glad that I’m not aware of because I want to be able to play anything.

When you first read the script for Berlin Station, what stuck out to you most about Daniel?

I was interested in the excavation of Daniel’s history and the past he had in West Germany with his father and the loss of his mother. It’s not something that carries through in the narrative, but it shapes him as a character. The idea of me being European and playing an American who’s a patriot was interesting. He’s a patriot working for the CIA, the epitome of patriotism. The CIA will potentially become fractured and floored, and you’re seeing a patriot struggling with that. Also, Daniel is not a superhero. He’s an ordinary guy struggling with extraordinary circumstances. He doesn’t actually come with a great skill set. He’s unlike other characters out there because sometimes you’re like, “They’re a genius!” or “They’re amazing with guns!” or “They run a marathon, so they can chase down criminals!” This is just a regular guy if you look at the core of it.

The characters, and by extension the actors obviously, are very watchable on this show.

Thank you very much! It was important for me as an actor to be curious about the world that I was coming into. I had to bring that curiosity to Daniel because we’re going to be watching these people through his eyes, which is sort of that lightness of touch. Daniel has a gentle fascination with these people. The study and psychoanalysis of all his opponents and his colleagues is gentle.

You went into production with this show last November if I recall.

We were in Germany for five months. It was lovely when we got there, just as all the festive stuff was starting up. Then we went into that bleak period of January and February, and the temperature hit -14°. It got tough. Then, as we were leaving, the leaves were coming out. You see that shift in the seasons throughout the ten episodes. It was a great experience to see that put on film.

Germany is so festive and beautiful during that time of the year. The only other place I’ve felt that kind of merriment was growing up in Minnesota. I’ve never been to Berlin, though.

Berlin is one of the most incredible cities. We talk about this a lot. It’s a whole character on the show. These characters all wear masks and they all put on different personas in order to function in the environments they’re going into. I feel that Berlin as a city is the same. It’s been through so many periods of strife: The Weimar Republic in the 20s, the First World War, the Second World War, the Stasi through the 60s, the fall of the Wall in ’89, and the modern Berlin, which is this very forward-looking futuristic city. It just has so many kinds of identities. We captured all of its different personas on the show. It’s there in the architecture and it’s there in the people.

Were you the first person on the ensemble to sign on?

No. But I had this script for a while. I had been sniffing around some of the other characters, actually. I looked at Hector first [now played by Rhys Ifans]. They got Richard Jenkins first, I think, before Rhys and Michelle Forbes came on. I think I was the fourth one to the party. Of course when you see that cast come together, you sign on the dotted line. Who doesn’t want to be in a scene with Rhys or Richard or Michelle? It’s one of the things that I loved so much about it. It’s a cast of over-forty year olds. We really like each other. There’s real chemistry between all the characters and so much potential to come back and do it all over again. I hope we’re lucky enough to get a second season. It would be really exciting to go back to Berlin with these people.

The Man in the High Castle didn’t get green-lit for two until well after season one ended.

I’m optimistic. But I don’t know if Daniel will make it to season two because we shot two endings. I don’t know how this will end. But the potential is there. They’re putting fuel in the tank.

Did they let you direct any of the episodes? They sometimes let actors do that on TV.

No, I wish! God! [Laughs] I think I’d have to earn my stars in order to do that. We had five feature directors who came in: Michaël Roskam, Giuseppe Capotondi, Christoph Schrewe, Joshua Marston, and John David Coles. Superb directors. It was one of the best things about it. With the second season, we’re going to fight really hard to get some female directors in as well.

But the interest is there.

I have an appetite for it, for sure. I would be way in over my head. I would have to put in a lot of studies. I wouldn’t know how to start, but I would know what I want and don’t want. I think I would be a really great actor’s director and get good performances out.