A Conversation with Gus Halper

The actor on immersive filmmaking, playing the goodies versus the baddies, and one of the year’s great performances. 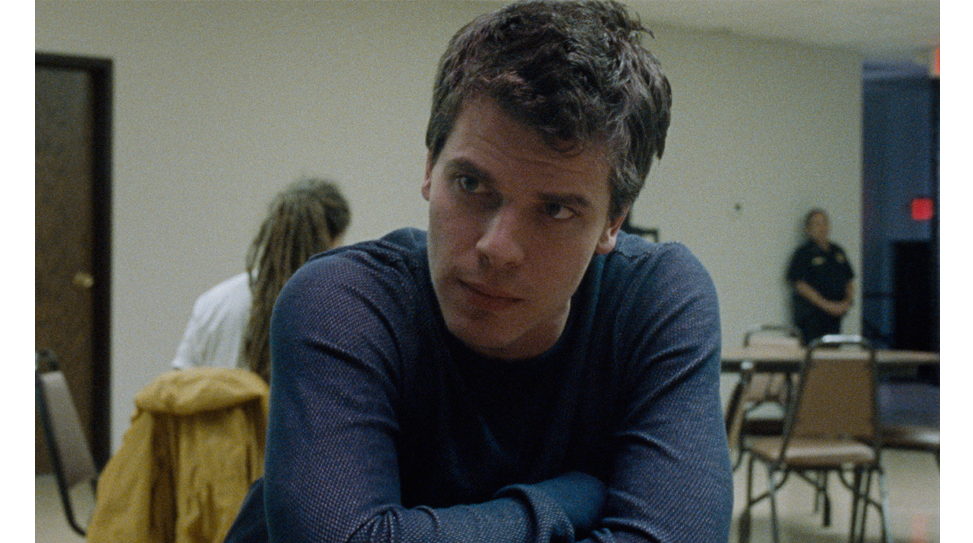 It was really nice to play a really good, decent guy struggling against all odds just to do the right thing.

In the opening moments of Nicole Riegel’s semi-autobiographical debut feature, Holler, Donald Trump’s all-too-familiar voice comes on the radio with his empty promises of creating more opportunities—“three very simple, but beautiful words: jobs, jobs, jobs”—which simply does not square with the harsh realities of our protagonist and her hardscrabble life, in an industrial town that’s hemorrhaging job prospects, where she’s barely getting by far beneath the poverty line.

Ruth (Jessica Barden), the resourceful yet rebellious high school student at the heart of Holler, has been forced to grow up way too soon in her forgotten pocket of Southern Ohio. With her mother stuck in the county jail and a family friend who’s already over-extending herself to help, her older brother Blaze (Gus Halper) can’t quite make up the difference to keep the both of them afloat and in their home. Together, they’re selling soda cans for pennies to the local scrapheap. Meanwhile, Ruth is missing so many classes that even her high school teachers have given up on her heading off to college. Her only constant is Blaze, whose belief in her exceeds how much faith she has left in herself. For one thing, Ruth is on course to staying in town forever when it’s revealed that Blaze finished her college application and sent it off on her behalf. Problem is, she still doesn’t have the wherewithal to go. They’re in an increasingly desperate bind when they fall in with a gang of scrap-metal pirates—waking up at dawn to pillage what remains of the community’s glory days—to get Ruth to college at all costs. This clearly spells disaster. What choice do they have, though?

Anthem reached out to Halper to discuss his compelling turn that should get him even more notices.

Holler opens in select theaters, and goes On Demand and Digital, on June 11.

This is one of my favorite performances in recent memory. You’re incredibly naturalistic in this role. I also think it’s so rare that you care for characters in this way without feeling like you’re being manipulated. Blaze is kind and good, and you want the best for him.

That’s so sweet, man. That means so much to me. Thank you.

So how did you get involved?

I was sent the script and auditioned for Nicole [Riegel]. That was pretty much it. But it was like a year and a half later that we actually ended up shooting the thing. We were supposed to shoot in the summer and then it got postponed, if I remember correctly because of Jess’ [Barden] schedule. So I was attached to it for about a year before we actually filmed.

Funny you say that because you guys are basically in a polar vortex in how it ended up.

[laughs] I think the script was originally written to take place in the winter so Nicole was pretty thrilled that we ended up actually shooting in the -20 degree weather. It was brutal, though.

I read in the press notes that Nicole was looking to cast an “atypical Midwestern guy.” I wondered what she meant by “atypical” and how that was telegraphed to you.

I’m not sure what she meant by that. I don’t know that I would describe him as atypical or typical. But I’m really honored to hear you say that you felt like you know him—that he was a real person.

Super relatable, even though our circumstances are so different.

When I read the script, I remember feeling really attached to it for that reason. The thing that really spoke to me most was the relationship between him and his sister. It felt like something I hadn’t seen done that way before so that really excited me. I have an older brother so there’s a special place in my heart for caring older brothers. But I’m not sure what she meant by atypical. That’s interesting. I’ll ask her next time I talk to her.

I was actually going to ask you if you had siblings. So that was a big resource for insight.

Totally, hugely. Obviously, our parents are a fixture and are wonderful, but there’s always I think with siblings a certain degree of self-parenting that you do for each other. That was something immediately evident in their relationship in the film. Blaze and Ruth were parenting each other. Blaze was picking up a lot more slack maybe, but Ruth also did her fair share of the comforting.

What was your introduction to Nicole’s world like shooting in Ohio? You were on her turf.

Well, she wanted Jess and I to spend a week together in an Airbnb before we started shooting. My intro was about spending a week with Jess in this funky, sort of creepy Airbnb on a farm off a backroad in Chillicothe, Ohio. It was literally just like the film because I had a driver’s license and, I think, she doesn’t. So we spent a week together—not in character or anything but just getting to know each other, and by design because Nicole created those circumstances. It was really fun.

That’s a luxury, right? You got to build chemistry prior to shooting. You were on location.

Absolutely, and it really makes all the difference in the world when you get along with your cast. I just loved working with Jess and Austin [Amelio]. We had a lot of fun.

Funny you say that the Airbnb was creepy. I read that Jess thought the place was haunted.

Each room had its own theme. There was a Gone with the Wind-themed room. I was in the cowboys and Indians-themed room. And there was a room that was just dolls. Both of us were like, “Fuck that room.”

Never, ever that room.

[laughs] It was pretty creepy, not gonna lie. It was enough with Gone with the Wind.

I know you learned some stuff about scrap metal. Who showed you the ropes on that?

We had a couple of guys who worked at the scrapyard. They just walked us through the whole process of sorting out bottles and putting shit in the baler, wearing protective gear because every now and then there would be needles in with all the other recycling stuff, presumably for heroin. It was a lot of monotonous, hard work and we would come home at the end of the day smelling like beer. It was really helpful to get insight into what that’s like. But we never scrapped a real warehouse or an abandoned building or anything. We watched a bunch of videos on what that is like and had a bunch of people there to walk us through the process.

Did Nicole populate the film with locals in the area as well?

They were mostly from there. I think there were five of us who weren’t locals in the principal cast and then everybody else was from the town. It was an interesting way of working. I’d never worked like that before, but it was a lot of fun.

Was that a working plant that you guys filmed in—the lounge where you guys congregate?

Yeah, that was a working plant. We kind of had to shoot around people who were doing shit in the other aisles. So that was a real place. There were no sets or anything. It was all real.

The movie definitely has a documentary feel to it, and I think Nicole got so much mileage out of going the Super 16 route. It situates the film in a time and place that feels so real.

For sure. The decision to use film, as difficult as it was, really paid off. It was really worth it. It’s gorgeous, too, and it did have that documentary vibe. We were really there. It was really -20 degrees. We were really on a scrapyard. When our characters are uncomfortable, chances are, we were really uncomfortable. That way of working I really like. It’s a lot of fun for me, and I think it was for Jess and Austin and Becky [Ann Baker] as well. But it was definitely a challenge. It was nice to have people who were really from there around to fill in the atmosphere and the environment. It was nice to have real people to play with.

There is something Bong Joon-ho said to me a long time ago that just stuck: “You can learn a lot about a person by pushing them to the limit.” Blaze’s decency is all the more profound to me because he’s good even though there’s all this crap he wades through. I would think it just feels really good to find somebody like Blaze on the page even, let alone play him.

Yes, because—I don’t know why—I tend to play pretty bad dudes. [laughs] It was really nice to play a good, decent guy struggling against all odds just to do the right thing. But he’s also somebody who’s not without what’s buried underneath all of the responsibility he’s taking on: a desire for youth, to just be able to cut loose and party. I mean, he skipped his childhood because he had such an incredible responsibility thrust upon him. I think that happens to so many people. A lot of people lash out because of it. A lot of people bottle it in. It was a relief to play a genuinely good, decent man. It was also a challenge for me because I’m so used to not playing that role.

Erik Menéndez was almost similar because, at least through the perspective that we were taking with the story, he really was a victim. There are some of the more bad guy characters I’ve played where you feel like as an actor your responsibility is to kind of muddy the waters and find what’s actually good and decent about them, what’s morally upstanding about them, and their reasons for justifying all of their behavior. Then with the good guy characters, I feel like the responsibility is on you as an actor to almost do the opposite: find out what’s a little fucked about them maybe. Where are they selfish? It’s just to round them out and make sure that they’re real people and not just there to serve and play a function in the story. It’s so that you believe they exist. I’m not saying that Blaze is not a genuinely decent man—we all have areas where we could do better.

The thing I love most about the film’s ending is not what Ruth does, but how it irrevocably changes Blaze’s circumstance completely. That hit hard. Do you wonder about him outside the script pages and beyond the screen? Are you optimistic or pessimistic, or just realistic?

I’m optimistic about Blaze. I know some people in my family who had similar upbringings and they’re doing fine, you know? They’re not making it hand over fist, but they’re not in abject poverty. They’re enjoying the time that they have with friends and family. Blaze is a good enough guy and a competent enough guy that I think he’s probably doing okay.

The idea that we don’t have to escape a place for happiness. We can find it anyhow.

Totally. That’s the thing. I think that’s what’s beautiful about this. That’s why I’m optimistic about it. Some people really do want to go on to higher education and take that path forward. For a lot of other people, it’s not even about the lack of opportunities—it’s a lack of desire and there’s nothing wrong with that. If you can find happiness and fulfillment where you are, god bless. I know there are plenty of people in his position who are able to do that.