A Conversation With SOAIF In Seoul

Who’s really being held captive in Sons of an Illustrious Father? What’s a “Korean room ghost”? Poop metaphors! Step inside, you. 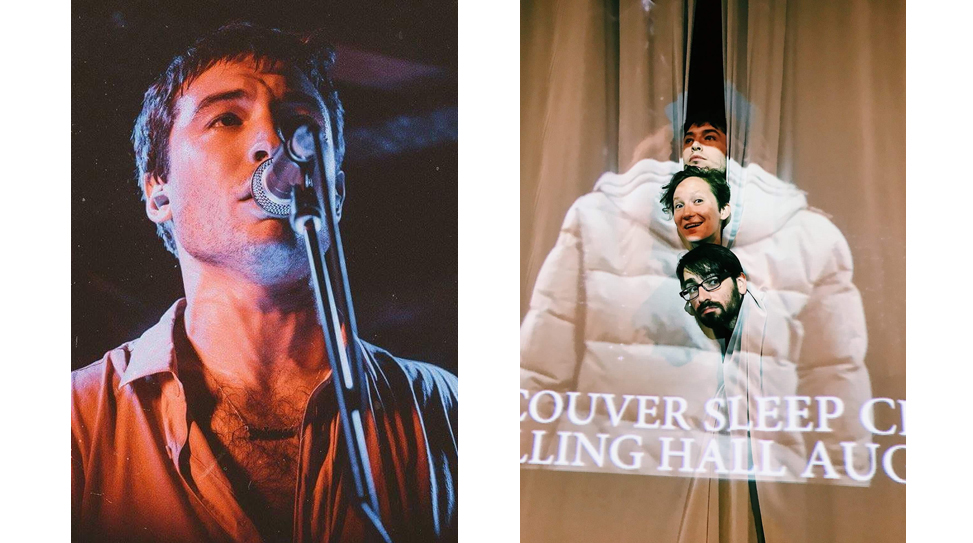 It seems like we’ve been summoned here by our newfound fanbase, which seems to be some of the folks who represent a bit of a cultural upheaval.

The poop metaphor is rather strong when we sit down to chat with Sons of an Illustrious Father. We hope you all can start ridding yourself of the poop in your life. To be clear, this is a good thing, if you’re anything like them. What they’re pushing out is rad music, among other joyous things.

Bandmates and best buddies Lilah Larson, Ezra Miller, and Josh Aubin complete each other’s sentences. Theirs is an unaffected closeness built over the course of a decade, so it’s not surprising that central to their operation is an egalitarian ethos emphasizing the communal aspects of music-making over fronting leads. All members contribute vocals and they’re all multi-instrumentalists, taking up whatever the music calls for without regard for predefined roles. Their music defies categorization—they’ve branded themselves “genre queer” to eschew labels. It’s this devotion to coloring outside the lines that drives Sons of an Illustrious Father in their music and in their advocacy, which has been at the heart of their project since its very inception. They are here to annihilate boxes and make the world better for everyone. They want you to join them in the fight.

A day after SOAIF’s performance at Rolling Hall in Seoul and leading into their second and final South Korean show, Anthem joined Larson, Miller, and Aubin for a very relaxed conversation.

How was last night’s show?

Lilah Larson: It was amazing.

Josh Aubin: It was quite a warm reception in Korea.

Lilah: Yeah, and to look out at a crowd that was so fully engaged and totally enthusiastic was really special. They were really well organized. They all held up these signs when we sang “U.S. Gay.” There’s a lyric in the song, “I want ‘fag’ tattooed in red on my forehead,” and all these kids had “fag” written in red across their foreheads.

Ezra Miller: We’d been wondering why no one has done that at our shows for several months. Part of our merchandise—

Lilah: We made temporary tattoos.

Ezra: And one of them is ‘fag’ in red so we’d been waiting for someone to slap it on their forehead. Little did we know—

Lilah: We were waiting for Seoul, in so many ways. [Laughs]

Is this your first time in Korea as a band?

Ezra: Humans. It’s rad. We’re having such a good time. What a great city.

I think your presence here is incredibly important, especially for the LGBTQIA+ community. I don’t know how much you’ve sensed this, but Korea is very conservative still on the whole.

Ezra: I mean, it seems like we’ve been summoned here by our newfound fanbase, which seems to be some of the folks who represent a bit of a cultural upheaval, out of some of the more harmful tropes of the conventional and conservative society that you’re talking about, which I’m sure has many merits and things that are good and cool about it. Like, any sort of conservative culture will have things that are rich in history or fascinating or substantiative in good ways. It does seem like there’s at least some population here who are noticing what isn’t so functional about some of those conventions and standards. I think, in many ways, it feels to us like that has called us here.

Lilah: There’s the obvious societal in the air and the things that we’ve been told about South Korea and what’s allowed and what’s not. But then there’s the interactions we’ve had with our fans who are some of the most articulately radical fans we have anywhere in the world, which is often the case that a conservative society produces the most articulately radical people.

Ezra: Right, because they have to define themselves against—

Lilah: Yeah, exactly. I think, for us, it’s really special to feel so seen ourselves by these fans. Presumably, I think what a lot of loving and supporting artists do is feeling seen by them. But we’re really having the mirrored experience as well being like, “Oh my god, they really get us!” They’re really demonstrating to us how much they get us.

Ezra: They’re ready to tattoo ‘fag’ in red on their foreheads!

Ezra: We’ve been pretty floored by the reception here. These fans and us bonding over what we share—it feels like we have this magical power together, you know what I mean? It feels like the people here have that magical power to generate change in this society. That feels sort of inevitable from this vantage. It’s a super-powered crew.

So much of your identity as a band comes from this totally liberating “Well, why not do it?” sort of perspective to eschew definitions and labels. When you give interviews, what do you find are the more problematic questions that you’re asked to address?

Lilah: That’s how we ended up with “genre queer.” We weren’t comfortable with the genre questions so we made an answer that eschewed answer.

Lilah: “Oh babe, you can really play that bass!”

Lilah: I trained myself over time. I used to be like, “Oh thanks so much,” and then Ezra at one point was like, “You have to stop doing that.” So now I just go, “I know, right?”

Since you guys make music without parameters or deadlines, when do you know that Deus Sex Machina: Or, Moving Slowly Beyond Nikola Tesla is an album?

Ezra: It’s like pooping, you know? Sometimes you feel it coming from aways away and you’re like, “I’m gonna have to find a nice spot to take this poop.” Other times, you’re like, “It’s happening right now! Where can I go? I gotta get this poop out.”

Ezra: Art is like poop in a lot of ways. We ingest things and then we make it into an amalgamated form and then excrete it—

Ezra: [Laughs] Yeah, deposit it from our bodies.

Lilah: Into the toilet of the world.

Ezra: We flush it into the world’s waterways.

Josh: This is a great analogy.

Lilah: Where does poop go?

Josh: Into the septic, which will be the title of our next album.

How did the running joke about Josh being held captive in this band start?

Ezra: I think it was at the grocery market!

Lilah: Yeah, it’s real. We did an interview—again, one of these mid-tour meltdown interviews—where, I believe, we were lying on the floor of a Whole Foods on top of each other, on speaker phone, just completely delirious.

Ezra: That one went OK… somehow. [Laughs] There’s an aspect of it that’s true, but it’s actually the opposite of what’s presented. The thing that’s not a joke is that Josh exercises very strict control over Lilah and I, and we’ve been trying to escape for years. A classic smokescreen. Josh is a bad person, you know?

Josh: What do you mean?

Ezra: We’re literally doing the same thing that you’ve done to us in like 12 different interviews.

Lilah: [Laughs] It’s a good move, though, when someone’s making a joke about you gaslighting them.

Lilah: [To Josh] You monster.

The questions run the gamut.

Lilah: There were a few where we were like, “No!” When we did that, it was all of our first times on reddit. We didn’t understand the medium whatsoever. It was a steep and sudden learning curve.

Lilah: It ended up being very fun. I was actually pleasantly surprised by the nature of the vast majority of questions.

Ezra: It was a nice reminder that there are great people who listen to our music and have interesting questions.

Lilah: Any time you dip into the Internet, it’s rational to be a little scared. We were fortunate to escape unscathed.

You guys wield a lot of power in that kind of cyber exchange because you’re so witty and eloquent, and everything you communicate is solidly formed and it’s easy to digest.

There’s a silly, lightheartedness to you guys that balances out the messaging and strong politics going on in your music. I think it’s really important.

Ezra: If we just talked about our politics, we would not be here. This would be bad.

Lilah: You’d be like, “I don’t listen to the news for a reason! It’s called self-care?”

What’s your best advice for self-care and good mental health?

Josh: It’s something I can always do more of.

Ezra: Sleep and caring for the physical body.

Lilah: I take Prozac. That’s part of my regimen that is very important, and I guess it’s important to affirm for people that there’s no shame in needing some extra help to get yourself out of an energetic rut and be able to do the other self-care things.

Ezra: There are really no rules or standards. I think it’s really healthy to develop a relationship with your own mental health and to observe it and to pay attention to it and to listen, and then to try different things and see what works for you. And I think what Lilah’s saying is really important in terms of, if you’re trying all of the DIY mental health tactics and they’re really not working and you’re in a really rough place, there’s nothing wrong—in fact, there’s a lot very right—about seeking the help of mental health professionals.

Lilah: Having done that in life—having sought the help of professionals and medicine—is what has enabled me to build more functional structure to keep my mental health strong, which it is. I’m very grateful for that.

[The window blind spookily rattles by itself in Ezra’s corner.]

You guys are flying back tomorrow. What do you have coming up?

Lilah: I’m playing a string of shows with my dear friend Lola Kirke as her guitarist, or as she describes as “My right and left-hand man.” That’s as far as I can think right now.

Ezra: I’m raising chickens and growing saffron. I just as myself will be featured on a musical track with our dear friend and long-time producer Oliver Ignatius, who has this incredible solo album that he’s putting out. I was lucky enough to be on one of his tracks. That will come out in August.

Ezra: Yeah, and we’re in the experimental and the remitigation and replenishing of the soil phase. We’re growing a bunch of different crops. Lilah is quite the master of fermentation and brewing.

Josh: Is this back to the poop metaphor?

Lilah: Not yet, but it seems like it’s headed there.

Ezra: It’s coming around to it! So we’re actually cultivating all of these crops and starting to make some beer and wine and medicinal herbal tinctures and various things that we’re gonna start sharing with the world at some point.

Lilah: Next step is blueberry wine.

Ezra: And all of these things will be very good for the gut and thus would result in healthy, solidly formed poops—both metaphorically in terms of the art we will create and quite literally.

Josh: Mostly, I’ll be working on my video game. It’s like a Galaga game for your phone. It’s a mobile space shooter.