The artist reveals himself the unmistakable hand behind his bawdy work, speaking drolly about boners and the cartoons of our youth. 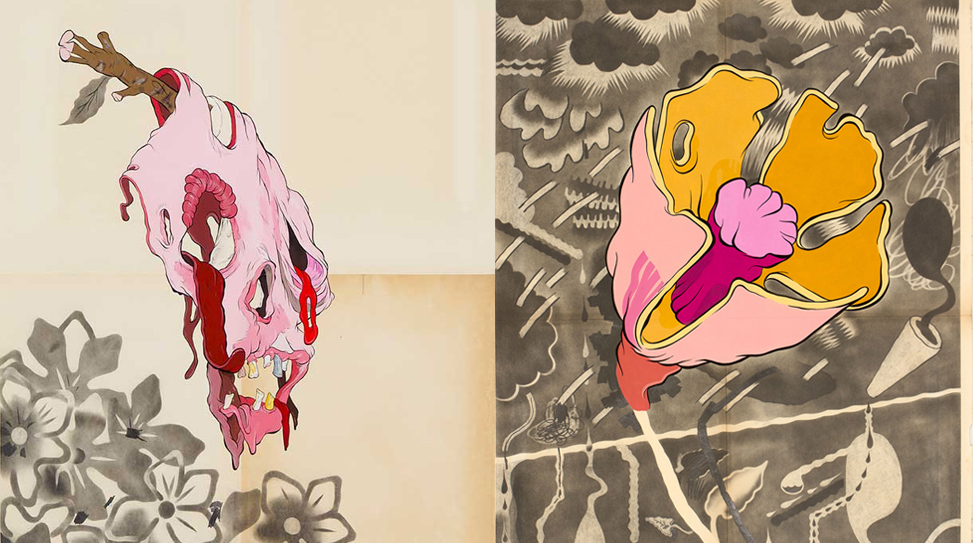 What are Eli Broad or Larry Gagosian really going to do to you if you just want to sit in your room and draw pictures of flowers and naked ladies?

You only need a quick survey of Mark Mulroney’s work to see that he’s an artist of a vibrant and playful mind. His, bawdy if you like, art is an aggressive mash-up of images from across the spectrum of our youth such as the American canon of comic books. Mulroney’s tendency to remix familiar visual cues, while poking a proverbial stick at cultural inclinations like sex and violence, is a self-referencing act that collects and spits out Frankenstein collages with equal indignation at all forms of authority in a post-everything world. Colors are looney-tuned, small details like that of a lone tree branch are torn from context, and characters are sexually provoked by the way of a paintbrush — it’s a work of take-it-or-leave-it quality that deters explanation.

Mulroney’s next solo exhibition, A Fertile Menace, will be on show at the Ever Gold Gallery in San Francisco from May 4th to June 8th.

Is the art world as scary as it looks from the outside?

I don’t think it’s scary. It’s competitive, but the stakes are so low that there’s little to be afraid of.

But surely it must be different for artists who either take themselves way too seriously or have a lot riding on whatever it is they’re making.

I guess that’s entirely up to them, whether or not they take themselves seriously. What I like about being an artist is the absurdity of the entire endeavor and that there is as much freedom as you allow yourself to have.

Who’s the scariest person in the art world, living or dead?

Nobody really. People are only scary if you allow them to be. What are Eli Broad or Larry Gagosian really going to do to you if you just want to sit in your room and draw pictures of flowers and naked ladies?

That’s a good point. What excites you more: if someone loves one of your pieces or it pisses the hell out of them for whatever reason?

I’m not trying to piss anyone off, but I’m also not actively trying to avoid it either. I make the work I feel like making with the understanding that it’s foolish to try and get everyone to like you. A positive spirit in the work is important to me and although my work often depicts savage acts of depravity, it’s always done with a sense of humor that I hope is understood by the viewer. But if not, I just shrug and get back to work.

When you look at a particular painting, movie, photograph—anything—what kind of stuff normally sticks out at you first? Can you give us an example?

I usually notice the thing that doesn’t fit but seems to work anyway. It’s really easy to compose a tasteful picture or construct a well produced song, but what I tend to gravitate towards are the things that shouldn’t work but do anyway. Those moments arrive when an artist has allowed their intuition to take over and they stop analyzing every little move. There is a Fairfield Porter painting that I really like that does this. He painted some pine trees and, for seemingly no reason, there’s an orange patch in the trees that doesn’t belong but works so very well. That little patch of orange adds a ton of mystery to the painting.

I also like that a lot of your pieces are concerned with what’s not there.

I don’t really care for complete pictures. I like a good mystery. It’s also easy to activate the imagination of the viewer by deleting certain parts of the picture. It’s like looking at a beautiful woman with all her clothes on and having to work to imagine her naked. If she was just naked in front of you, that would take away all the fun. I remember the first time I went to a strip club and being really disappointed because the dancers came out naked. I thought there would be a tease or something a bit more playful than, “Here are my tits, have a look.”

I read that you’re not into work that’s too “calculated”. Do you always start a project without knowing how it will end up?

Most of the time I have a rough idea of where I want to go with something, but I never map out every move. I suppose if I did I wouldn’t have so many mistakes up in the attic, but I also wouldn’t grow much as an artist. Once I know how to do something, I have a hard time repeating it because I get bored doing the same thing over and over again, even if it’s the smart thing to do in terms of selling work and advancing my “career”.

Do you ever toy with the idea of creating motion-based work? I guess that would require more planning on your part, which you don’t seem too fond of.

I think I could do an animated piece without planning the entire thing and still have it be interesting. I would just need to sit still at a computer and learn some new programs or something. Right now, I don’t have the time to go back to school and update my tech skills.

What were you into as a kid?

I liked what most kids in my neighborhood liked; dinosaurs, Legos, sharks and playing army.

It’s funny how stuff like that is so universal. Although I’ll add that I didn’t really put restrictions on what I liked as long as it was from America. I even obsessed over the Polly Pockets that my aunt would send my sister because none of our friends had them.

I think my childhood predates the Polly Pocket craze that swept America.

I’m also interested in the kind of stuff you were watching at the time—of the cartoon variety.

We didn’t have TV until I was 10 and once we got one we were allowed to watch one hour a week. But Dukes of Hazard was off-limits because my mom thought Daisy Duke was a tramp. In terms of the cartoons that I watched as a kid, I tend to recall the ones I didn’t like more than the ones I did like. Tom and Jerry was boring and Jerry just seemed like a smartass and I wanted him to get killed. George Jetson was a pussy and Fred Flintstone was too stupid to keep a job. I couldn’t figure out why anyone would fight over Olive Oyl so Popeye must not be all that with it either.

I wonder if characters like Bugs Bunny and Peter Griffin are less interesting to you because they’re so obviously meant to be assholes.

I like Bugs Bunny. He was clever and a great dancer as well.

What’s the best thing about growing up in a Catholic household?

The feeling that you have all the answers and you’re superior to everyone else. Unfortunately, it all unravels later in life and then you have to figure out what you believe for yourself because all the answers you were given don’t make much sense.

Some of the most vulgar and abrasive people I know are fallen Catholics. Do you think it has anything to do with resentment and this feeling that they were somehow cheated?

I don’t feel any resentment at all. I just dropped what was bullshit and kept moving. There were some good things I got as well like, most importantly, a work ethic and delayed gratification. But I probably got those more from my parents than the church.

What do you find hilarious on a day-to-day basis?

Maybe not hilarious, but I’m constantly surprised that there aren’t more random, violent attacks. I know we have what seems to be a lot of them, but considering what our natural instincts are, I’m impressed that we have the discipline not to get violent over every little thing that bothers us.

What would you say to someone whose work aims to only shock?

That they need to try pretty hard because we’re past the days when an artist could build a career by just being shocking. There’s so much stuff constantly popping up on the web that I think it would be hard to get anyone’s attention for more than a minute or two by just simply being outrageous.

Here’s a hypothetical scenario. You go check out Tilda Swinton in that glass box and comments are compulsory. What would grace that piece of paper?

The same thing I draw in every gallery comment book… a giant smiling boner.

Is that a compliment? Do you draw frowning boners or disheveled vaginas?

Never. They’re always happy boners regardless of how I feel about the show. Perhaps I will move onto vaginas someday, but they require more finesse in order to get the comedy out of them. Boners are just easier.

When I look at your work, I can’t help but imagine boxes full of clippings that have gone unused, or will be used in some manner down the line. Do such boxes exist?

Boxes, files, scrapbooks, piles, bundles, etc. I’m constantly collecting and sorting images. I have scrapbooks that are very specific, like some books are just pictures of Batman or Sophia Loren, and some are more general. Some boxes just have pictures of desert islands and other boxes have images of men’s faces that are large and in color. I have a file folder of images of people pointing to the left and another file of people pointing to the right. I really like looking at all sorts of pictures and taking from them what I need to make my own work.

Where would you say you make the best finds, generally speaking?

Flea markets, without a doubt.

What kind of parameters do you set for yourself when you cull images?

If I look at something for more than a second, I keep it. Otherwise, it has to go.

Do you collect other things?

Books, stamps, kid’s drawings, anything with a baseball on it, gum wrappers, bad jokes, unusable foreign currency, and random screws because you never know when you’re going to need one.

I used to collect stamps. What are some of your favorite ones?

I had a bunch of Soviet stamps that were commemorating their space program. They were diamond-shaped and very colorful. I also had some stamps from Africa that were very rich and colorful as well. U.S. stamps are the worst. They’re always stiff and lifeless. Perhaps the postal service wouldn’t be hurting so bad if they just took some risks when designing their stamps.

What is your most prized possession?

In case of a fire, I would probably try and save my sketchbooks first. I use them a lot and would be bummed if they were to burn, but it might also be liberating so who knows? Maybe I should just burn them myself.

What’s the most exciting thing that could happen in 2013, to you personally or otherwise?

My wife and I’ll get our band off the ground and start recording songs.

Do you have a name yet?