The acclaimed painter on finding technique through destruction, his “maddening” isolation, and the recent Carousel pop-up exhibition. 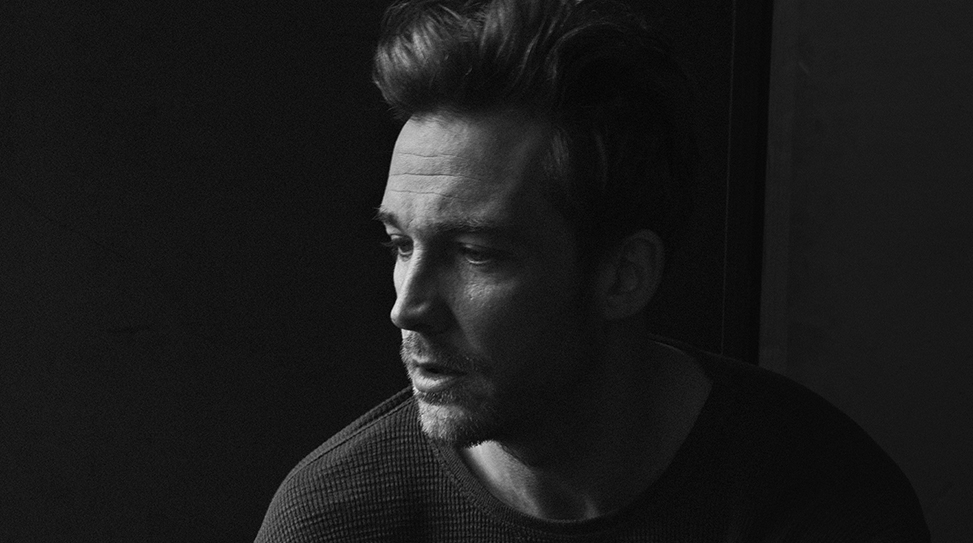 That's the psychosis. That's the thousand thoughts a minute. That's the hundred paintings I should've painted. It's hard on my little brain.

New York was the beating heart of the art market as the Armory Show rolled through town earlier this month. And while not a lot of outside artists would have the balls to make an intro during the annual art fair, Chris Moon—one of UK’s strongest voices making some serious waves right now—was up for the task. The self-taught British painter has developed his own distinctive style through decades of exploration and obsessive investigations into his chosen medium of oil paintings that have already won over some sizable fans like Michael Fassbender and Sir Paul McCartney. Featuring six new paintings in disarmingly playful colors that seesaw between abstraction and figuration, the artist debuted his Carousel pop-up on the ground floor of a pre-war, Chelsea building—where he had also been living and working—that was to be torn down shortly after the exhibition. This wouldn’t be worth mentioning if not for the fact that Moon’s entire practice, as he explains it, involves the destruction of his works in which to find new techniques.

The Carousel exhibition seemed to have gone over well.

It’s surreal, man. You kind of have an out-of-body experience at the show, so you don’t take it in. Everyone’s telling you it went well and it doesn’t creep in until you probably go home.

That’s how it’s always been?

It’s hard to gauge it because you’ve gone from being on your own creating the work, to being rammed into a room full of people who all want to talk. At the show, I’m kind of done with the work, so I’m blank. It’s hard to reengage with it. It’s sort of like talking about an ex-girlfriend. In my head, towards the end of creating the work, I’m leaving already.

You were staying in the same building where the show was held, right?

Yeah, it fell apart around me. I honestly feel like I’m going through some fucking training in New York life because it was freezing three weeks ago. Inside the studio, it started raining because all the pipes burst. It felt like survival training, but I was painting at the same time.

The building’s getting demolished. These classic buildings are going. That’s probably one of the last few in Chelsea, you’ll see. It’s a good space. The New York art scene is a big machine, and I just wanted to have a party and a good introduction. Apart from the snowstorm, I think it went alright from what everyone’s been telling me. Did you enjoy yourself?

Of course. That was actually uncommonly fun.

Then it was good! [Laughs] Sweet.

There’s something romantic about an artist creating work in a space that’s literally falling to pieces. The period that you weren’t showing publicly and creating work for yourself only, you destroyed the paintings, right? There’s an accidental parallel here.

Do you see all the individual layers through your mind’s eye?

There are so many paintings underneath. The finished picture tells the story of the whole painting process. I leave the scars behind because I was obviously working on these completely different paintings until I got to New York, and I needed to reinvent them. I wanted to leave the marks and the journeys of that there, and layer on so much paint that it almost becomes sculptural in the way it’s formed. That’s the difference between paintings and pictures: the process, the journey and the struggle, compared to these finished pieces that people put on their wall and sell as a commodity.

The process itself is just as, if not more, important than the resulting piece.

That’s the psychosis. That’s the thousand thoughts a minute. That’s the hundred paintings I could’ve painted and trying to put fucking six paintings on the wall. It’s hard on my little brain.

What happens when you get frustrated with a certain piece that you’re working on?

You just have to keep working, or go for a run. But even then, if the painting becomes a battle with you and the canvas, something else could come out of it. I could find a new technique that I haven’t found before. It’s constantly evolving as I evolve. I find it startling whenever I don’t want to sit pretty with it. I want to move on. Painting’s all about storytelling. The best paintings are.

It’s so easy to want to just move onto the next thing when it’s not going right.

When it’s in a premature stage, it’s easier to rethink everything. But towards the end of finishing a painting, that’s the hardest. It’s like relationships because when you start, it’s all fun, fresh and messy. In the middle, something starts going awry, before the divorce. But six months later, you look back and see something good in it. It mirrors life itself… How cheesy was that? [Laughs] Towards the end, I fall out of love with most of my paintings and that’s when I need them gone. It’s just a long process. When I find an identity, I’ll kind of want to leave that and move on. You grab with you all these tools and, at the next show, you can start inviting in other techniques, and move on again. I want to start painting solely from life in the next year. There’s so much to do!

Did painting come to you first or did you try something else on?

I started painting through drawing. I was a human photocopier and started filling in with paint. Painting was always there and that’s the only thing I held onto.

Does anyone else in your family practice art?

What do your parents do, if you don’t mind me asking?

My dad runs a bike shop in a little village called Hullbridge and my mum’s retired. I’m an oddity.

I recently talked to this French actress and both of her parents were painters their entire lives. Naturally, I asked her if she’d ever wanted to follow in their footsteps and she recoiled. From watching her parents, she had concluded that painting is the most difficult art form because of the crippling loneliness. You’re always alone. She saw her parents’ misery.

It’s maddening, and you find that out. You gotta be good with your own company. You gotta have thick skin and, sometimes, that skin gets thinner. My confidence goes up and down, and the drive has to be there. It’s complete isolation all the time. In the beginning, you kind of start thinking about this as a life less ordinary, that you want to live this life less ordinary, but the actual fact of it is that it’s the complete opposite. It’s the most drawn away from any kind of reality that most people have. Most people meet and talk to people. I fucking wake up and I’m talking to paint. You get so used to being alone that it’s hard to form any relationships. But, you know, that’s the sword. I gotta die by it. I finish a show and go on a complete bender, and I have no idea what’s going on.

So you finally emerge from your cave for some human interaction at your show’s opening or whatever, but you won’t remember any of it the next day?

[Laughs] They’re just faces. I can’t remember what people said or talked about. There’s just lights everywhere. It’s surreal. I’m sure I’m going to end up liking them, but sometimes I’m so paranoid about the work, that’s all I’m thinking about. You don’t believe what anyone says anyway.

Do you enjoy going to art galleries? Do you check out what other artists are doing?

I never used to. I grew up in Essex and no one was in the art scene, and no one really went to museums. Me going to an art gallery was to steal art magazines from the local library, but that was it. That’s changed. I think it’s important because, sometimes, you’re so down with what you’re doing, you need to get out there. Other painters can inspire you to push forward, certainly.

Are you getting sick of Francis Bacon? How do you feel about being written up and described within the context of someone else’s work, even if they’re iconic?

There have been a few paintings that could’ve tapped into it. But like any journey, you’re gonna meet fucking people along the way. It’s whether you hold onto it or keep in contact. Usually, I find it and move on because a lot of things have been done in painting. The only thing left is imagination. Loads of techniques have all been done. But, yeah, you can fall into this comparison. It’s whether you stay. Naturally, I’m going to hear other people’s mark-making strokes because that’s all I do. It’s weird, that one. But not so much anymore. I just don’t hold onto it. You can’t.

You’re a self-taught artist. There’s always this discussion about figuring it out for yourself versus going to art school. Do you think that ultimately matters?

It doesn’t matter. But it takes longer to get somewhere if you’re self-taught, I think, because through university, you get to meet with buyers and exhibit your work. I never had that, so you have to skirt around and create your own team. There’s a lot more hustle. But the end result will be the same—that’s life. I wish I went to university, in a way, but I traveled instead.

Maybe travel is better in the long run. You’re tethered to the real world.

It was because I didn’t know what the fuck I wanted to do in painting. I had this talent, as it were, but I was making art for art’s sake. I had to stop and go away to reinvent myself. I didn’t want to be a commercial artist. I’d rather tell stories. You’re always finding it. You’re always still looking.

Do you ever have to meet deadlines when you paint?

Everyone else sets deadlines, and I break them. You can’t set a deadline. I’m not a screen printer, you know what I mean? A painting can evolve a week before a deadline for a show. I’ll change the whole fucking show because I’ll find something or something else will come out of me.

Do you have a permanent residence or are you sort of drifting along these days?

I don’t, because I want to travel. Back in the day, all artists traveled when it was really inaccessible to travel. Now it’s easy to travel, but no artists do it. Everyone sits in their studio recreating the same fucking paintings. That doesn’t excite me. I want to get moving. In New York, I’ve gotten a few offers, just little residencies, two months here or three months there. That’s gonna be fresh. Maybe the States was the start of that because I came from L.A. to New York to tell the story, and leave. I don’t know where to live. I don’t know where I want to live. Settling isn’t something I ever thought of. Shit… I’m fucked, aren’t I? [Laughs]