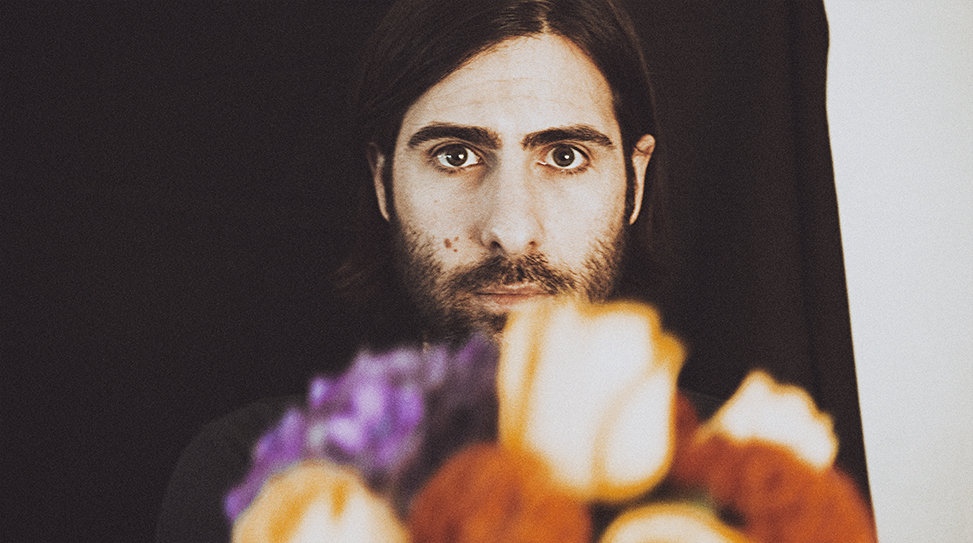 Do you want to be in this movie later? As you can see, we already put your face on the poster.

Alex Ross Perry’s third feature, Listen Up Philip, is a familiar tale about artistic ambition and middle-aged regrets. When we first meet Philip Lewis Friedman (Jason Schwartzman), he’s an already-somewhat-acclaimed author with a hit debut novel behind him and on the cusp of delivering his second book. But Philip is anything but happy or well adjusted, convinced that his success is doomed to be short-lived, and feeling indifferent or outright hostile towards anyone who doesn’t share in his self-centric worldview. Much of the film traces his declining relationship with his photographer girlfriend Ashley (Elisabeth Moss) and his deepening friendship with Ike (Jonathan Pryce), also an author and also an insufferable prick, but one who’s much better practiced at both. At every step of the way, our acid-tongued protagonist is callow and oblivious, like a spoiled manchild throwing tantrums in his 30s and expecting to get away with it.

Philip seems tailor-made to be played by Schwartzman. Now that’s not a diss. Far from it, in fact. Philip could easily be Rushmore‘s Max Fischer taken a decade down the road or Bored to Death‘s Jonathan Ames’ aggressively misanthropic long-lost twin. In Listen Up Philip, Perry has created the kind of character sure to disinvite viewers who crave conventional heroes and recoil at seeing their own worst tendencies splayed large on the screen. So it’s thanks to Schwartzman—sincerely one of the nicest guys you’ll ever meet—that we also see how Philip’s ego, while inflated to massive proportions, retains an eggshell of fragility: the driven perfectionist who’s hungry for affirmation, the hapless relationship partner who nevertheless needs the company of another. All that indifference, arrogance and self-involvement, well, that’s not a good look for any grown-up, which is kind of the point in the case of Perry’s carefully calibrated Listen Up Philip.

ANTHEM: How are you doing this morning?

JASON SCHWARTZMAN: Oh, everything’s good. How are you guys doing?

J.S.: Did you just say “happiness”? That’s so weird because we’re shooting something right now and we wrote a scene where Gael García Bernal does a photoshoot with this photographer whose catchphrase is the word “happiness”. I’m literally getting updates on my phone right now.

J.S.: The photographer is this South African gentleman and his catchphrase is like, “Press it, press it, press it! Love you! Happiness! Happiness!” So when you said that it was so weird because this guy invented the idea of “happiness”. They’re literally shooting [Mozart in the Jungle: Sex, Drugs, and Classical Music] right now. I was like, this girl is going to feel so bad. She’s going to somehow watch that and remember this. She’s going think I made fun of her!

ANTHEM: This is a nice place to start. How do you end up working with someone like Gael? How are those connections first made?

J.S.: Well, I don’t make those connections. We wrote this character and then our director on it, Paul Weitz, knew him a little bit and reached out to him. He was aggressive in trying to get Gael because he’s… elite! Yeah, I didn’t know him, but I’m so happy that he works on that show because he can do no wrong. He’s amazing and it’s incredible to watch him act.

ANTHEM: Roman Coppola’s one of the co-creators on that show. I actually started out interning at The Directors Bureau, but I never saw you around. I heard your name around the office, though.

ANTHEM: Oh god, this had to be around 2007? Your presence was very much felt even if you weren’t physically there.

J.S.: You wouldn’t know it because I called there. They’re like, “Who?” [Laughs]

ANTHEM: You have a lot of family and friends there.

J.S.: Well, Roman is obviously my cousin, but I’d never done anything with The Directors Bureau before. Maybe I would like to now… Now that I know my name was being thrown around. I gotta use this shit!

Jason Schwartzman and Chi Chi posing for a #polaroid with @myrnasuarezphoto and @20x24studio. Photo by @melancolicmermaid #NYFF #listenupphilip #NYFF #FilmLivesHere

ANTHEM: What was it like growing up in Los Angeles, bundled up in such a family?

J.S.: I don’t know anything else. For me, my family’s there. It’s just what I know. I was actually sort of raised in a way where I didn’t know much about Hollywood and all that crap until I got to 17 and I could drive. Before that, I was more on the west side of town. But I love it! There’s something really specific about the place, like, the way the light is when the sun sets. Not to over romanticize the place, but there’s something about it that feels like home to me. And I don’t know if it’s good or bad. Roman’s from San Francisco and he describes it the same way: “This is my home. I feel it. The fog.” It might not be where you want to be, but…

ANTHEM: When did filmmaking start feeling like work to you?

ANTHEM: I mean in terms of going through the business where you suddenly start working with bigger studios, creating things for bigger clients, more money exchanging hands—when people start relying on you.

J.S.: There are two instances where it feels like work most to me. Firstly, it obviously feels most like work when you’re trying to get a job and you’re out of work. That makes you look at what other people have. You’re trying to get into a movie and it truly feels like a dogfight. But then, when I do get a job, it’s stressful because I’m an untrained actor. So I try to work hard and get the preparation down as much as I can. Even though it sounds like non-creative work, just learning the lines and getting the script figured out, making the cards and notes, feel like work. I feel this pressure to be prepared. But it also feels like work every single day. You go to this place every day you wake up. Every day I get in that car in the morning.

I was watching the Dallas Cowboys/New Orleans Saints game the other day, which made me think of something. They’re doing this interview with Tony Romos before the game and he’s just talking about fucking nothing, right? Now I’m thinking, if I was him, I would be freaking out right now. That guy is about to get tackled. A lot. He’s about to go through a lot of physical pain and he’s talking to the reporter like he’s waiting for his venti coffee. But when the ball gets hiked on the field, you’re just in it all of a sudden. There’s no time to think. Acting is obviously not like football, physically speaking, but I’m equating it to that type of thing where it’s all about preparation before all hell breaks loose.

ANTHEM: If you do come across those moments of anxiety—

ANTHEM: How do you coax yourself out of that? Are there rituals?

J.S.: There are always little things that make me feel good like music. It’s fun for me to make mixes and stuff that help me get into the mood of the characters. That relieves the stress for me.

J.S.: Well, this poster behind me. The poster came first, so we went backwards. Alex [Ross Perry] was like, “Do you want to be in this movie later? As you can see, we already put your face on the poster.” And I didn’t have a choice. It’s like Back to the Future. Have you talked to Alex yet?

ANTHEM: We’re not going to. So you can say whatever you want, I guess.

J.S.: Well! Where do I begin? [Laughs] No, I read the script and I was so taken by the precision of it. Most scripts just give you a visual concept. Most scripts that get sent to you look like this. [Jason grabs a wafer-thin magazine.] So it’s already like, what the fuck is this thing? Not that a bunch of scripts got sent to me, but Alex’s script looked more like this. [Jason picks up an issue of Vogue.] There was something special about it already, you know? This is the September issue. When I read the script, I was so intrigued and curious about what was happening, but it’s also like, geez, that character just said something really mean. Philip just says certain stuff that I personally cannot imagine myself saying to other people. It was very intense. I would actually read like 10 pages or 50 pages at a time, and be like, I just have to stop for a second. I put it down to do other stuff and start wondering what Philip might be up to right now. There was no question that I wanted to do this movie, but it was also very scary to be honest. I rely so heavily on a director. I rely on the relationship and ask a lot of questions for guidance. I need to be directed.

ANTHEM: What was your first impression of Alex when you met him?

J.S.: When I met Alex, within two minutes, I knew he had clearly spent so much time on the script. He had a feeling about the whole movie where I would ask him something like, “What about this?” and he would tell me, “Absolutely not!” He’s very specific and knows exactly what he wants. To me, that’s the best. I like someone who has that kind of clarity and I knew we could make this movie together. If it’s terrible, it’s terrible. If it’s not, it’s not. But we can do this together. And some people bring out different sides of you. Some people can bring out terrible sides of you. I know some people where if I get around them, I’m not funny. I’ll say the dumbest things and become this… idiot! [Laughs] Every time I see these people, I’m aware of it now. And some people bring out a really goofy side of me. Some people bring out a really serious side of me. Alex just brings out a side of me where we can have fun and laugh. I felt like we already had some sort of exchange there, which made me feel really good.

ANTHEM: There are certain actors, such as yourself, who have a very specific “look” that, for whatever reason, audiences get comfortable with. I think a lot of people would be very shocked if you shaved your head or something.

J.S.: I don’t know that I would look good with a shaved head. Yeah, I don’t know. I don’t think about it too much. Hmm… Yeah, I don’t really think about it too much. But one thing that was important with this character was to have these muted colors on him like greens and browns. He’s bearded, obviously. It’s tricky and tough because… Well, let’s take our picture right now! [Laughs]