This year’s César Award-nominated newbie on her discovery, beating the odds, and her breakout role in Céline Sciamma’s Girlhood. 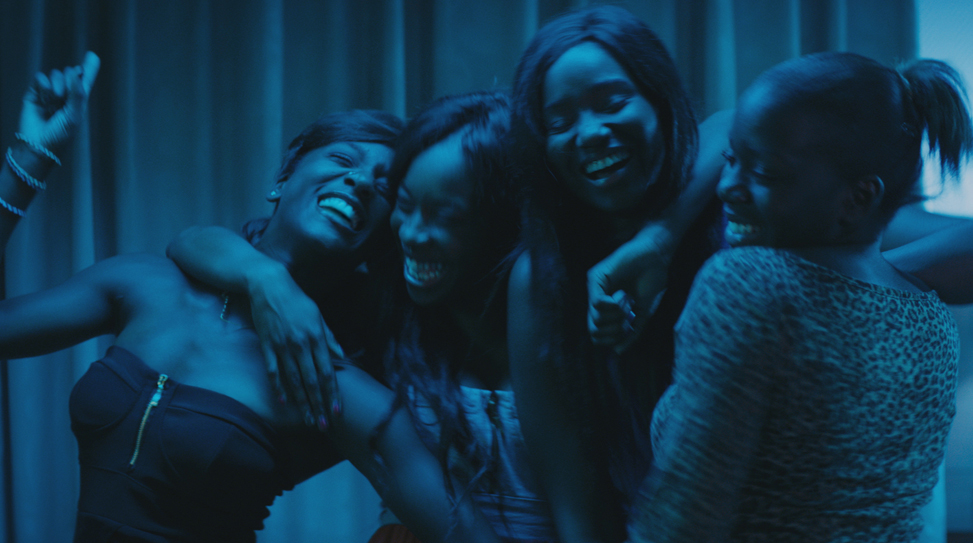 An adrenaline shot of socially aware filmmaking that is as invigorating as it is perspicacious in exploring adolescence, French filmmaker Céline Sciamma’s Girlhood observes Marieme (Karidja Touré), a stolid and put-upon teenager who lives with her abusive brother, absent mother, and two younger siblings in the banlieues of Paris. With little means to move beyond the stagnant life she so desperately wants to escape, Marieme’s reality takes a dramatic turn when a group of tough girls recruit her to join their devil-may-care motley crew. Marieme sheds her inhibitions, changes her name—the girls rechristen her Vic for “victory”—and strives to stake her claim on life.

To be truthful, Girlhood is only as good as its young ensemble. The four first-timers, which includes Assa Sylla, Lindsay Karamoh and Marietou Touré, are fully capable of conveying the psychological complexities, punchy life force and emotional riptides of their magnetic heroines, and that keeps us transfixed by what’s on display. At the center of it all is, of course, Karidja Touré, a face in a crowd Sciamma’s team scouted at an amusement park in Paris. The breakout star’s vulnerability and inexperience lend themselves well to her character’s fragile state, while her ability to transition from Marieme’s profound sadness to Vic’s unhindered fury cuts way deep.

Girlhood opens January 30 in New York City with a national roll out to follow.

Congratulations on the film’s four César nominations. What an incredible feat, especially for you as a first-time performer. How does it feel?

I feel well! But I’m also a little bit sad because Assa [Sylla] was with me on the pre-nominations list. I want to bring her along with me. I can’t comprehend what’s happening right now. This is my first performance in my first film. A César nomination is a very big deal and I feel overwhelmed.

It is a big deal, especially in France. Have you had a chance to celebrate?

No, because I’m in Rotterdam for a film festival now. I’m here with Assa! I called Céline [Sciamma] because Girlhood got another nomination for Best Music or something like this. But no, we didn’t get to celebrate. We will hopefully have a party soon.

You were discovered at an amusement park in Paris.

You had no formal acting training going into this.

That’s wild. Who approached you? Was it [casting director] Christel Baras or Céline?

It was Rita [Rego], who worked with Christel. I think they did this because there aren’t a lot of black actors in Paris and that’s how you find people. For me, it was at an amusement park.

What was that exchange like? What was your reaction to this stranger walking up to you?

Yeah, I didn’t expect that. She told me, “Hello, my name is Rita. I’m here to cast a girl like you. I don’t know if you know about Céline Sciamma.” I had no idea who this was. [Laughs] She told me about Céline’s other films. I was very serious. I think Rita did everything she could to make me feel comfortable. Then she gave me her number and told me they’re looking for a main actress. She thought I could do this because… I don’t know why. She told me, “If you call me, I think you will pass the audition.” I thought, yes, it’s a movie, but maybe it will be on TV. Maybe it’s a stupid movie? I didn’t expect that this would be a big movie that will screen at the cinema for everybody around the world. I thought it was a small movie because they were looking for actors on the streets. I didn’t think it was a big deal. But when I went to the audition, I met Christel, Céline and another girl who came to audition, and I saw that it was very serious and a very big deal.

That must’ve been a real comfort to you. It’s like, “This project is legit!”

What were you doing when they found you? Were you a student at the time?

Yes, I was going to school. It was terminale, the end of high school. I was studying to pass the exam for the baccalauréat. I went back to continue school after we finished the film.

Did you ever dream about acting growing up?

My dream was to be in Harry Potter. It’s my favorite movie. I love all the action, the spells, and the witches. I wanted to be like Ron and Hermione. I wanted to be the fourth one… [Laughs] I wanted to be a witch! With Girlhood, I see my face in the subway and on the streets, but I still have the same friends and I’m doing everything the same. Acting is a new thing I learned to do.

What was your impression of Céline when you first met her?

I didn’t get to meet her in the very beginning. I met her in the second audition, I think. When I saw her, I didn’t know she was the director. She was very simple. When she said, “I’m the director,” I said, “Oh, really?” She has this little angel face and, I don’t know… I thought she was an assistant or something like this. She was very kind to me. She really helped me to do my best.

Is it true that Céline didn’t supply you with the text right away?

Yes. We didn’t have the text. During the auditions, we only knew it was about four teenage girls. That’s all we knew about the film. After she chose the characters, we got our scenarios.

Oh, so she didn’t know who would play what when you were all cast. When she finally gave you that screenplay, what was scary in terms of what would be required of you as an actor? And what did you think would be fun to shoot?

The scenes with the boyfriend were difficult for me. Those were the only scenes I wasn’t comfortable with, but Céline helped me. I thought it would be fun to do the Rihanna scene where we’re all dancing together in the hotel room. I wanted to do the scenes with the girls together.

What did you guys shoot on the very first day of filming?

I don’t know if you remember this scene, but it’s where the girls are waiting for me behind the high school. Marieme meets and talks to the girls for the first time. We felt very comfortable shooting that because Assa, Lindsay, Marietou and I are all in the same position as actors. It was new to all of us and it was scary for everyone. Nobody was above somebody else.

Did you find memorizing the lines at all challenging on this first film?

No, it was a very cool experience and I would love to do it again! In the months of shooting, the girls were all living in the same house and we helped each other. It didn’t feel like work because we were always laughing and dancing. I think it was the best summer of my life. On the weekends, we were back home with our families, but then we were back at the house every Sunday evening.

You often hear stories about actors who have trouble watching themselves on-screen with their finished films. What was that experience like for you?

We saw the film before going to Cannes because we had a private screening. During the first screening, I was only watching my face. [Laughs] “I’m so ugly! Why am I doing this with my face? Why am I walking like this?!” We were only judging ourselves. The second time, I was looking at the other girls. The third time, I stopped watching myself and I enjoyed the story.

That seems only natural. I mean, I don’t know what’s it’s like, but it’s not a stretch to imagine. Is it a similar thing to see yourself on movie posters?

That’s funny for me because I walk by the posters and people don’t realize that it’s me and I’m right there next to it. [Laughs]

One of the most powerful moments in the film is the end shot. How did you learn to get yourself worked up to reach such emotional highs?

I remember the make-up artist putting menthol into my eyes to make me cry. But that wasn’t for me because it didn’t work! I thought about sad things. I can cry in one minute if I watch romantic movies or tragic movies. I thought about bad things and we would shoot. Sometimes, you tell me sad stories and I cry like this as my character. We shot this scene a lot because it was important for Céline. We did it maybe 20 or 25 times. At the end, I didn’t have any tears left.

Now that Girlhood is getting so much attention around the world, where is all of this headed for you? What are you working on when you’re not at festivals?

I’m doing auditions for some projects right now, so I’m still waiting. In Paris, I’m doing a lot of photos and interviews. It’s the César, auditions and interviews right now. I would love to continue to do this and, I don’t know, maybe a film with an American director or something like this.

Are there any actors out there that you’re especially fond of these days?

In France or in America?

In France, I have nobody. [Laughs] Maybe Omar Sy, who I can identify with because he’s a very successful black actor in France. Outside of that, I don’t really know… I’m a big fan of the American industry and if I think about that, I would say Kerry Washington. I’m in love with her series Scandal right now. I also love Chloë Moretz and Shailene Woodley.