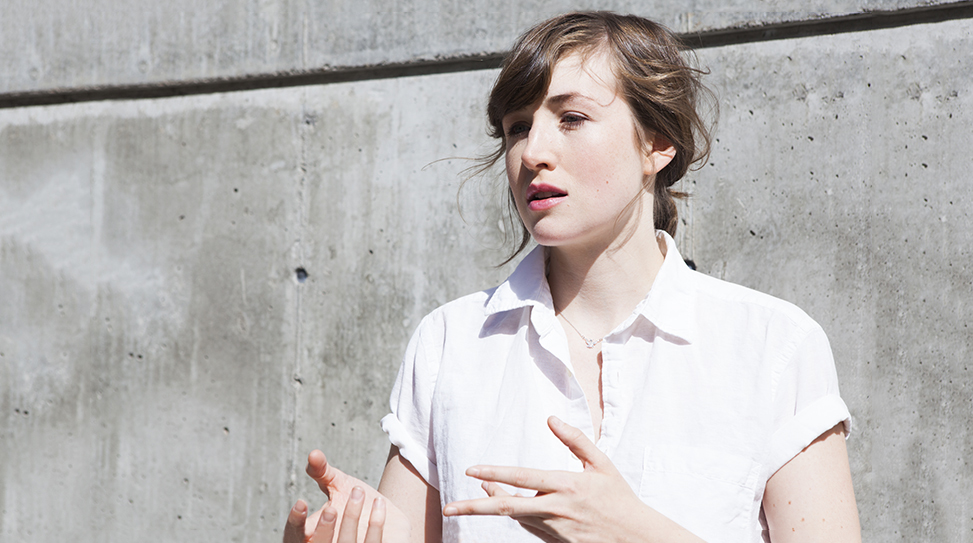 There’s so much fear and insecurity in these two people. There has to be a reason for the audience to root for them to be together.

We’ve done it before, or at least occasionally think about it in our jaded haze of harsh perplexity. Zachary Wigon’s debut feature, The Heart Machine, explores deception in the knotted intricacies of online dating, tracking a long-distance relationship that isn’t quite what it seems. Cody (John Gallagher, Jr.) is a twenty-something New Yorker a few months deep into a cyber relationship with someone he’s never met. Virginia (Kate Lyn Sheil) is a New York native studying abroad in Germany—or, that’s what she’s told him. The story begins with an ambulance siren wailing on Virginia’s side of a Skype session, which is questionably un-European. Cody suspects what we soon know to be true: Virginia isn’t in Berlin. In fact, she’s been living in Greenwich Village, a short subway ride from his Bushwick apartment. From this point onward, Cody spends most of his time obsessively investigating, bulldozing into the lives of strangers who might know her.

It shouldn’t constitute a spoiler to say that one of the film’s wonderful surprises is to discover it isn’t so much about Cody’s search for Virginia as much as it is about Virginia’s search for herself, an exploration that gives Sheil the broadest range of emotions she’s had to play to date, as she continually reinvents herself over the course of an uncommonly expansive list of roles in the world of independent film. This is truly what pushes the story towards a rich rumination on 21st century psychology: the detours into Virginia’s life reveals her to be someone deeply apprehensive about collapsing physical intimacy with an emotional one, a complicated psychological spectrum rendered with a typically virtuosic display of extroverted introversion by Sheil. The perennial indie darling has forged a Rubik’s Cube protagonist that could’ve easily fallen back on obvious femme fatale devices by balancing vulnerability, loneliness and warmth with a glimmer of malice.

The Heart Machine is set for release October 24, both theatrically and on VOD.

One thing that really sticks out looking at your filmography is… how much you work! There are a lot of bullets in that chamber.

[Laughs] I do. What basically happened was that I was lucky enough to be around all of these amazing filmmakers as they were going into production on their first or second features. The collaborations felt very natural and made sense. There have been quite a few for a while. And all of those filmmakers are branching out now and doing incredible things on their own. I would love to work with them again someday. They’re amazing and only getting better. They’re all close friends of mine like Joe [Swanberg] and Alex Perry [Ross]. I’ve known Alex since I was 19 years old. I’ve known Amy [Seimetz] for six or seven years now. I was just in the right place at the right time. We’re such giant fans of movies and that’s where we connect. We sort of have this shared vocabulary and that creates the ease when we’re working together. We have similar reference points and senses of humor. But in the future, I do want to take more time with each project.

Does working with someone so close add to the value of your craft? Is there more room for honesty in your performances given the level of openness?

Yeah, I would say there’s a certain level of comfort because we do know each other. There’s certainly the gift of ease that comes with it. You’re able to draw from a similar pool of references. If all else fails, there’s shorthand, like, “That moment in The Graduate!” It’s like, “Oh, I see what you’re going for.” [Laughs] But what I’ve found working with people I don’t know is that most sets I end up on function in very similar ways. It all feels relatively comfortable. You go in knowing your lines, block the scene out and shoot, you know? When you end up working with people who know what they’re doing in this very clear way, it makes the process easier because we’re all in it together. That’s one of the things I really love about filmmaking. It’s a team effort.

Were you a fan of cinema first? Did acting come later on would you say?

I’d say both came simultaneously. I always watched a lot of movies. When I moved to New York, I started going to Kim’s Video. That was at the same time I was going to acting school. I always wanted to be an actor. I was doing a lot of theater, but I was also quite obsessed with movies.

It’s interesting that a lot of the filmmakers in your “collective” act as well. Amy [Seimetz], Joe [Swanberg], Alex [Perry Ross]… What’s the story behind that kind of osmosis?

I think it just has to do with loose boundaries. We’re all such fans of film. It is funny how a lot of the people who’ve wound up acting primarily went to film school wanting to direct. They started out as actors. Also, it comes from this world of not having much money where you just need to be scrappy at that point. You sort of need to know how to do everything, which is something I actually love. I’ve done production design and produced things, for instance. I love all of those jobs as well. I think it’s healthy to try on different hats because, as an actor, you can forget in those moments when you’re pampered a bit. It’s too easy to forget that this person in the art department has been awake since three in the morning building a fake crib or whatever.

That echoes what Amy said when we spoke to her last year. Sun Don’t Shine was actually the first time that I saw you in anything.

Oh, cool! I love that movie.

She talked about the importance of teamwork, especially on low-budget, no-budget films. It’s teamwork in the truest sense.

So did the two of you first meet on Silver Bullets?

I met Amy when we very first started on Silver Bullets, yes. She was producing it and holding the boom at the same time. [Laughs] We were at this restaurant on Second Avenue in New York and I remember her crouching down like this. And she had green hair because she was doing this other thing. I was very taken by her from the beginning. I think she’s wonderful.

She’s super charismatic. You can’t buy that. And where did you meet Zach [Wigon]?

We were at NYU at the same time. I didn’t really know him in school because I was acting and he was directing. There’s this sort of weird divide at NYU like that, but we had mutual friends and he came into Kim’s Video a lot. I remember him from that mostly, although I was already aware of who he was. When he saw a movie I did called Green, that’s when he started considering me for The Heart Machine.

It’s good that you and John [Gallagher, Jr.] have great chemistry in those Skype conversations because, outside of that, you both engage in some questionable behavior.

That’s one of the incredible things about the movie. If either one of these people were simpleminded or honest, they could probably be together. Virginia wouldn’t even have to tell the truth in that kind of scenario. It’s like, “Guess what? I’m flying into New York tomorrow!” and everything would be fine. There’s so much fear and insecurity in these two people. There has to be a reason for the audience to root for them to be together. It all hinges on those Skype conversations and this real connection that they seemingly have over Skype. I think it’s there and I hope it’s there. That was very important to us.

This is more about the logistics, but where were the two of you actually situated during the Skype sessions?

Before we started shooting, we had a couple of days of rehearsals face-to-face, which was so helpful. When we actually shot the scenes, we were recording it on Skype and filming from behind. So when we’re at Cody’s place, we were in an apartment in the East Village. John was on one side of the apartment and I was on the other side of the apartment. When we were shooting at Virginia’s place, we were in Williamsburg. We were in the same building, but in different apartments on different floors. We were always nearby.

Zach is just running up and down the stairs at this point.

Basically. [Laughs] Zach would pop his head into the Skype frame and be like, “That went really well!” There were people just delivering a phone to John and I, like, “Can you hear me?” We shot the Skype conversations the last week of shooting. Zach allowed us to improvise a little bit for that.

I think Zach said something like 10% improv on this one.

It was just a little bit, which was important. We wanted to stick to the script completely, but we wanted the Skype scenes to be playful. That’s when Virginia is most herself. John’s a very funny person, so he would just riff and I would laugh. Some people are brilliant improvisers and I come from the studying-it place. When you’re asked to improv on top of that, after being very, very situated in your character, it can be good.

Everyone has a different process in their work.

The thing about improv is that doing so much of it doesn’t necessarily make a film better. When Lynn Shelton’s Your Sister’s Sister came out—an amazing ensemble piece—all people would talk about was how much improv was involved. It won’t suit every movie.

Yeah, I think it just depends. Improvisation offers spontaneity and a certain amount of heightened energy and naturalness, but for me, I’m more able to be natural as an actor when I’m not thinking about things to say. Sometimes I fall back on my own personality when I’m asked to improvise. If I was left to my own devices, I would just sit in the corner over there and not talk. [Laughs]

Why does LISTEN UP PHILIP director Alex Ross Perry shoot on film? "It's funny to answer that in front of a screen that says Film Lives Here… There's nothing more beautiful than watching a movie on a screen this big and seeing all that grain up there." Photo by Mettie Ostrowski @melancholicmermaid #listenupphilip #filmliveshere #NYFF

I also saw you in Listen Up Philip, which is Alex’s latest film. I noticed that you were in his very first feature and you have another one coming out soon as well.

How would you describe your longstanding creative partnership with him?

Don’t hate me for asking this, but when a good friend approaches you with a film idea that you’re not really into, how do you handle something that?

[Laughs] I feel lucky because, with most of my close friends, I would want to make a movie with them. I know that sounds like a cop-out, but it’s pretty much true. I’m doing something with a close friend of mine next. And if Amy ever asked me to do anything with her, I’d be so psyched!