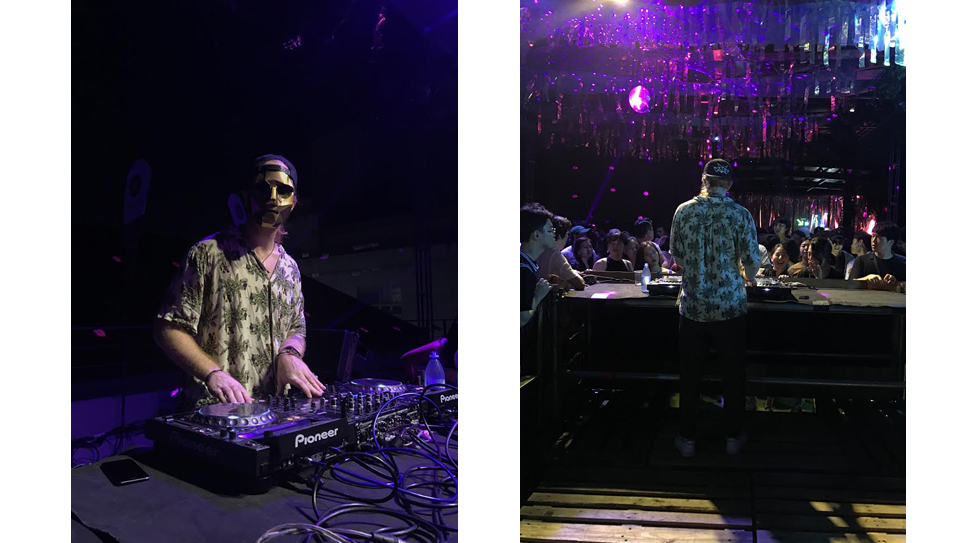 If you want to stay in this business long-term, deception is never a good idea.

So get this: On the heels of Jakarta and Bali, Satin Jackets stopped by the S-Factory Rooftop in Seoul this weekend—Fred Falke, YonYon, and SIRUP also manning the tables—as part of South Korea’s Breezeway Music Weeks Festival, and Anthem made it a (!) point to catch up with them.

Producer Tim Bernhardt has been releasing your next summertime soundtracks under the pseudonym Satin Jackets for many years now—with the act’s masked ambassador who goes by Mr. Satin Jackets on globe-trotting duty to deliver the tunes in Bernhardt’s place (more on that below). Riding on the formidable waves of certified SoundCloud hits such as “You Make Me Feel Good,” the purveyor of Nu-disco of supreme quality released his debut album Panorama Pacifico in 2016 via Belgian imprint Eskimo Recordings. Satin Jackets’s most recent records, “Take It From Me” feat. Emma Brammer and “Primordial” feat. Niya Wells, are appropriately stellar—perfect for those of us who will be clinging to the final scraps of summer once September rolls around.

The idea that you would join forces with a performer is clever. You took it a step further from Daft Punk so you don’t even have to be there. What were your intentions at the outset?

Well, I did my fair share of touring with my previous band in the late ‘90s and early ‘00s, and realized I enjoy being in the studio much more than being on stage. So when Satin Jackets started to pick up momentum and the first booking requests came, I made this decision. The general idea has always been to let the music be the real star, rather than putting any face into the spotlight.

You talk about it openly so it’s not like you’re being deceitful in any way. I hear that you’re at the shows sometimes—obviously, incognito. What do you learn from that experience?

If you want to stay in this business long-term, deception is never a good idea. My job is being a music producer and making sure things go according to my overall vision. When I do go to one of the shows, I enjoy knowing that everything that’s happening on stage is because of my work and my music, and I can simply relax and enjoy the ride the same as everyone else in the audience.

You’ve spoken about the “hidden melancholia” in a track like “Fall Apart”—and a lot of other tracks in subtler ways—with Wonderland magazine. On Panorama Pacifico, I feel it on tracks like “Shine On You” and “Find Out,” which are otherwise feel-good, summery tunes. Does the melancholy come into play organically or is it intentional? And how do you work on happy music when you’re not particularly feeling that way?

Disco has always had a touch of melancholy to it. It’s a feeling like, “Tomorrow the world could come to an end so let’s enjoy the party tonight and have a glass of champagne with it, too.” Personally, I don’t think it’s impossible to make happy music when you are feeling melancholy, or vice versa. Indeed, doing so can be a way to explore your feelings and balance things out.

Panorama Pacifico is so phenomenal. Which track came together fastest and also slowest?

Thanks! I haven’t really measured the production times to be honest. Sometimes something just clicks and falls into place like “For Days” and “Feel Good.” Other times, I have to let a song mature for a while and come back to it—maybe even a few times. Even if you want it out there sooner rather than later, it never hurts to take a break from a track and gain fresh perspective on it.

You remastered some of your classics on Diamonds Are Forever. That’s like rewatching the original Blade Runner on Blu-ray—Ridley Scott’s Final Cut—for the first time. Was remastering a fulfilling experience?

Absolutely, yes. My production techniques have changed quite a bit over the course of eight years or so. However, I didn’t want to destroy the original essence of any of the songs, so I gave it a little nip and tuck here and there and brushed up the overall sound. Listening back to them—it made me happy to realize that all of the tracks still stand strong today.

Do you ever think about scoring a film?

I’d love to do that, but then I also know that it’s both a big challenge and a big commitment.

What’s the last film score that gave you goosebumps?

I don’t remember anything recent that resonated with me, but the soundtrack that will always give me goosebumps is the Blade Runner music. I’m also a big fan of Michael Nyman’s Gattaca score.

“Primordial” came out recently, which features Niya Wells, after your previous collaboration on “Never Enough.” Could you talk about how the collaborators come into the picture for the vocals? Are you already looking for something quite specific like a big vocal anthem when you reach out or is it less calculated?

I always enjoy working with skilled vocalists. After all, I have to sit with the vocals for weeks or sometimes months even. And Niya is obviously an outstanding talent with a very professional working style. I have to admit: I prefer doing that a lot more than trying to strategically find singers from certain projects or genres that are “hip” right now.

I’m sure you keep a running list of future collaborators that you’d like to work with. On the vocal side of things, who are some of the newer finds that you’re interested in?

If I had some on my wish list, I’m not sure it would be wise to say it publicly here. What I can say is that I am currently working on a song with Panama over at Future Classic.

I hear you have a new single coming October 12th. What is it called and what’s it about?

Yes, it’s called “Athena” and it features an American singer, Anduze, who I haven’t worked with before. It’s about the love for the Greek city.

On Instagram you teased “next year” for album two. How far along are you now?

Pretty much right in the middle. There are still a few things that have to fall into place. It’s the nature of this fickle business that it sometimes goes very quickly and then everything becomes—or at least seems to become—quite complicated. But I’m pretty sure I will get there in time!