South London’s Anglo-Japanese confetti canon on their saccharine pop stylings, the video games of our youth, and Die Antwoord. 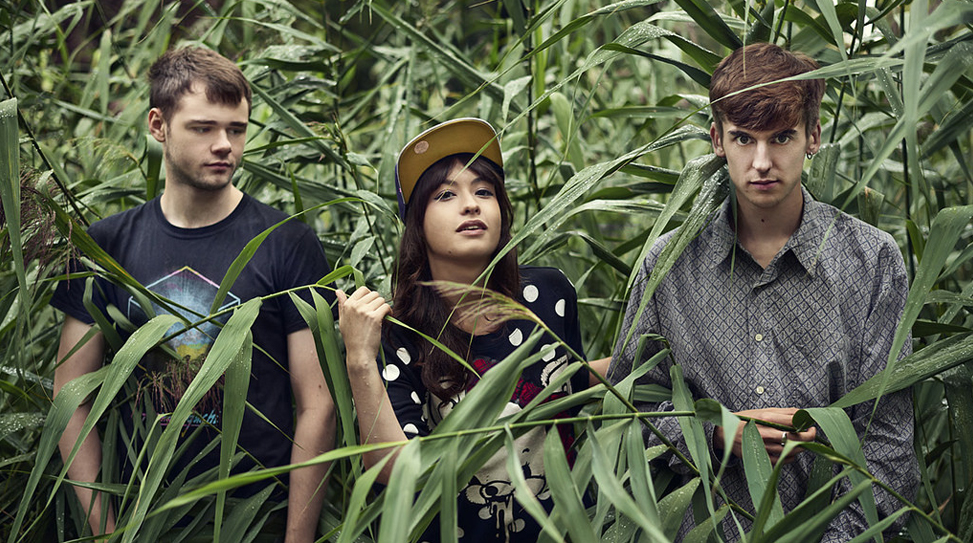 In Britain, it was only maybe a little later we realized that so much of our culture was actually from Japan.

South London’s kawaii torchbearers Kero Kero Bonito—vocalist Sarah Bonito, and producing partners Gus Lobban and Jamie Bulled—addressed some pressing issues of our modern era on their 2014 debut LP, Intro Bonito: the strangeness of babies, homework, supermarket deals, and girls who would rather out-game any boy who dare challenge them to Playstation marathons than sew or bake. (We wouldn’t darest.) Less a tag-along and more a shared pact with PC Music’s growing artillery, KKB’s frosted confection of Ninendo 64 synth notes, dancehall, preset MIDI drums, bilingual singsong raps, and J-pop flourishes are very much of its time.

Following the aforementioned 15-track mixtape, along with a remix pack featuring Danny L Harle, bo et, et aliae, Kane West, Toby Gale and Spazzkid, 2015 sees the Anglo-Japanese globetrotters continuing their party whistling charge into the world of pastel pop with adorable one-off singles, “Picture This” and “Chicken”. The music at times candy-lacquered for your next tooth decay, you could compare it to the perfect ice cream cone making you feel something like this:╰(*´︶`*)╯The arms rising above the head in celebration. What’s next? KKB’s first-ever live performances in Japan, dumb-dumb! Scroll down for the ooey gooey details.

You guys are in Los Angeles at the moment. How’s it going over there?

Gus Lobban: Great! We played our first L.A. show last night and it was insane. We sold it out. A lot of KKB fans around here it would appear.

It’s great to catch up with you guys at the tail end of this North American tour. What have you been doing? What did you see?

Gus: We’ve been all over! We’ve seen both of the coasts. We’ve learned how tours work, pretty much. I mean, we’ve been amazed by the KKB communities in all these cities. We went to a place in Boston with no idea what would happen, but there were people coming up, having learned the lyrics to the album tracks. It’s the most beautiful thing ever, actually.

I’ve often heard artists say exactly that. There’s nothing more thrilling and moving than to hear the audience sing along to your lyrics.

Soon you’re off to Japan for a mini tour. This is your first time playing there, right?

Sounds like a big milestone for KKB, for obvious reasons.

Sarah: We have a huge fanbase in Japan so we’re really excited.

Gus: The announcement for those shows had a really good response. People are definitely buzzing about it. We’re very excited to see how that translates.

You’ve accomplished a lot and done exceedingly well in the past two years. Do things feel very different to you now from when you first started out?

Sarah: We got tighter as a band, performance-wise. But, you know, we’re still the same. We’re playing to a slightly bigger audience.

Gus: And we still hang out the same. We’ll go grab breakfast together and bring the KKB experience. But that’s an interesting question. I think we definitely stepped it up.

Your origin story is not an uncommon one: Gus, you were friends with Jamie from school, and you guys found Sarah on an expat community forum. It’s not unlike how a lot of bands find members on Craigslist in the States or through social media. I’m curious—what kind of people did your ad attract? Did it run the gamut across the age and gender spectrum?

Gus: We used MixB, but we actually used Gumtree as well. On Gumtree, we got quite standard singers who were pretty good. Some of them were quite blues-y singers and we had to be like, ‘You’re good, you’re really good, but I don’t think we’re gonna be able to work…’ Well, I don’t know actually because, now that I say that, I think blues-y would’ve been pretty funny. We knew exactly what we had in mind. And from the MixB one, the Japanese one, we had like all Japanese students. There was this one guy who was like, ‘I was in a band at school, like, I know Pizzicato Five. We can do something amazing!’ I’m like, ‘Well, maybe we could make something amazing, but maybe not now. Maybe it’s a bit out there for us.’ We got no one else like Sarah, really.

Jamie Bulled: We were recording by the second session.

Sarah: That was pretty freaky because, at the rehearsal, they didn’t tell me anything! They’re like, ‘Let’s record a song!’ and I was like, ‘Okay…’

Was the chemistry there from the very first beginning?

Gus: It was pretty chill. I remember the moment because we were in New Cross, rehearsing in a studio. I went down to the station to meet Sarah and she was wearing, basically “Sarah clothes”—

Sarah: I had one side pink hair, one side blue hair.

Gus: It was dope! I think it was in the first ten minutes we started chatting about Kyary Pamyu Pamyu—all the cool J-pop stuff. It was easy. We’re pretty go-with-the-flow people.

Sarah, I know you played the saxophone and had been in a brass band before. You’re also a visual artist, which plays a big part in KKB. You’re bilingual. You obviously showed enough interest in the project to reach out. What was your “pitch” to the guys, as it were?

Sarah: It was like [Gus] asking, ‘Here’s a song. Can you sing it?’ I never rapped before KKB. The guys are like, ‘Here’s the track and we need a rap for it,’ and I just made one. We kind of went from there, really. It was a process.

Gus: I think one of the most amazing things was, basically, pretty early on, handing a track to Sarah to rap on and she did such a good job. It’s like, ‘If she can do this, having never written a rap before, what else can she do? This is amazing.’ That was definitely a really exciting one.

Another thing that’s really cool about you guys, especially from an early stage, is how specific and cohesive you are with, not only the sound, but the visual side of things as well. Is this something you guys still talk about often or is it second nature nowadays?

Gus: That’s a good question. It’s kind of second nature. When we first started working with Sarah, it was kind of obvious what KKB was and what it meant. But we have a lot of chats about what we can do with the art and stuff. We’re always talking about cool things we can do with it.

Let’s talk about video games, which obviously plays a huge role in your overall soundscape, and something that’s played such a huge role in our collective upbringing as well.

Gus: We’ve always shared that video game history. In Britain, it was only maybe a little later we realized that so much of our culture was actually from Japan.

Gus: We were trading Pokémon cards at primary school, and Yu-Gi-Oh! and cartoons on TV were all Japanese. Maybe a few years before starting KKB, it clicked that British culture was Japanese.

Sarah: Yeah! Windows 98! Because I used to live in Japan, when I would go to the UK to spend the summer, that’s when I really got into Tomb Raider. It’s like, ‘Where are my friends at?’ I was all alone in the UK with my brother, so we would just play Tomb Raider.

Gus: You had Lara Croft, then.

Sarah: I had Lara Croft to keep me company, and Crash Bandicoot was my thing. Also, what the guys just said, that’s exactly what I was doing at school as well: trading Pokémon cards and the Tamagotchi being banned at school because people were having fights over it. It’s pretty much the same childhood we had.

Gus: And it just goes to show that it doesn’t really matter where these things came from. We share them to the extent that Jamie, Sarah and I can have almost the same conversation about it. Globalization has made that useful.

Jamie: The world is very small.

Gus: When it comes to the music itself, I think it’s a bit of a tool for us. I believe that video games and video game sound chips and synthesizers are a really useful method in terms of making electronic music. The NES sound chip is based solely on 8 channels and you can get very precise with it, and that’s such a useful way of thinking about producing music when you’re confronted by all of this over-complicated sort of indulgent electronic stuff. When you want to make short, snappy pop music, the NES sound chip, the SPC700, or the Amiga or whatever—I could nerd out—are really useful. They’re so concise and really good at carrying very strong personalities, which I think KKB has. So it’s definitely a bit of maybe an overthought academic side to that.

A commentator on YouTube pointed out that you guys sampled Super Mario 64 on the track “Sick Beat,” but that’s not the case, is it? You recreate everything from scratch.

Gus: That was good research. We found the same sound they would have used and recreated it from scratch by sequencing that sound and putting effects on it to make it close to that as possible. I think it was The Sugarhill Gang who did a similar thing because they couldn’t clear the Chic song in “Good Times.” We basically very nerdyly did that with the Mario song.

How far along are you now with the next album?

Gus: We’re working on it. We’ve got a few tunes in the can already, which we may or may not have played on this tour. There’s a load more ideas and we’ve even come up with ideas on the tour, actually, some really funny things. So we’re really excited to get back to the UK and work on that.

So you do work on new material while on tour. You don’t keep that completely separate.

Gus: This tour has been pretty swift so we’ve been thinking about the shows, but here in L.A., we’ve had around five days to wind down a bit. That’s been great because we’ve been so inspired on this tour and we could actually have a play around on Logic. That’s one of the best things for us.

If you were approached to score the sequel to a movie of your choice, what would it be?

Did you guys ever play that game Maniac Mansion on the NES?

Yeah, that game has an amazing soundtrack. I once tried to convince Little Boots to sample it as a joke—not really a joke—and she just laughed. It was a sad day.

Jamie: We could do a quick song to that.

Here’s a hypothetical scenario: If you guys could choose two artists or bands out there to form a supergroup with, who would they be?

Jammie: Die Antwoord and us will happen at one point. It will be great.

Sarah: I love them… I know their raps by heart.

They just played in L.A. not long ago at Festival Supreme.

Gus: Yeah, I know. We missed out. They were playing in Glasgow the same day we were playing there once. [Die Antwoord] and we have a lot to chat about—a lot.