We talk sex, death and copyright infringement with the artist at his home studio in upstate New York. 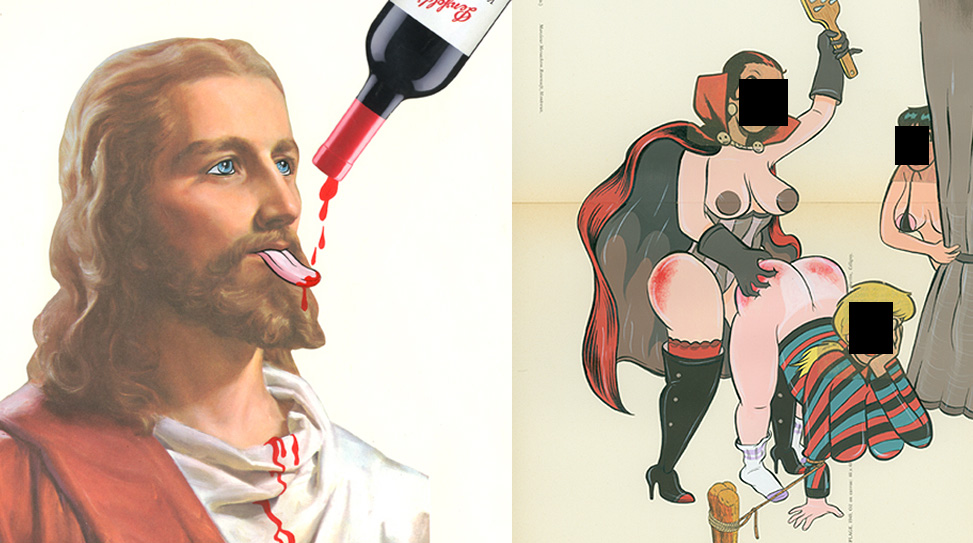 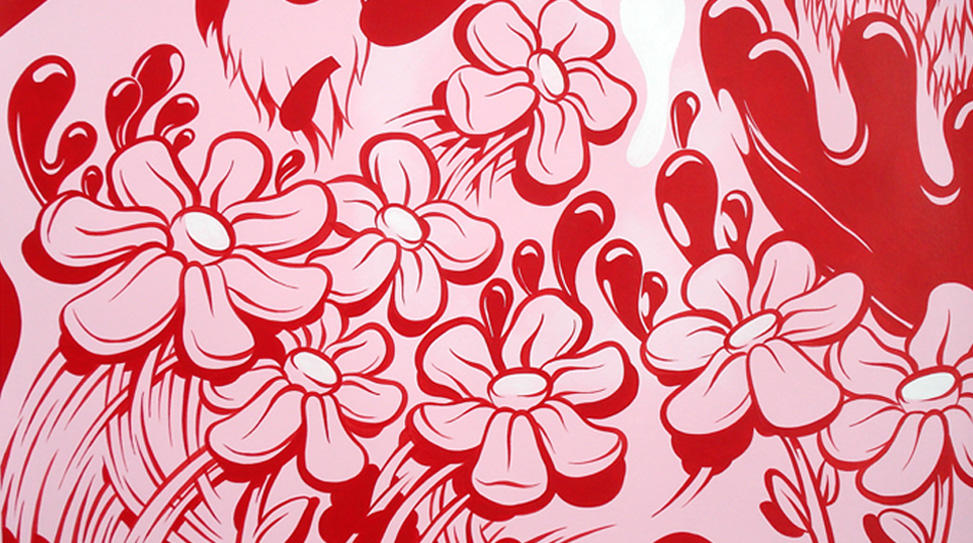 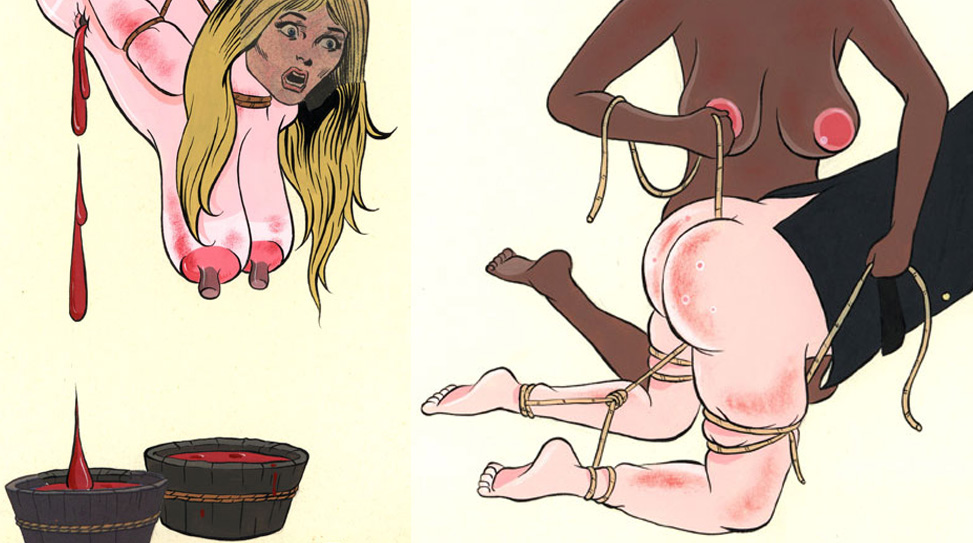 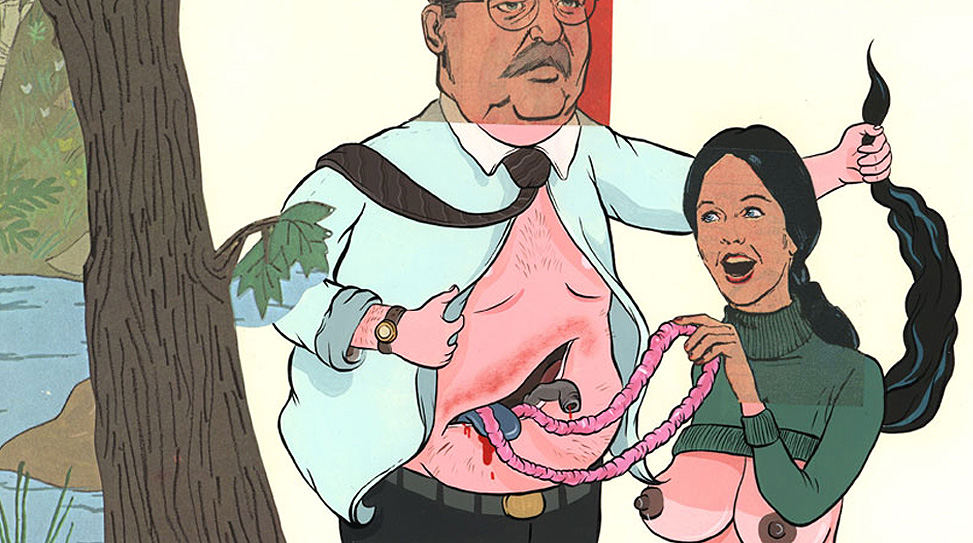 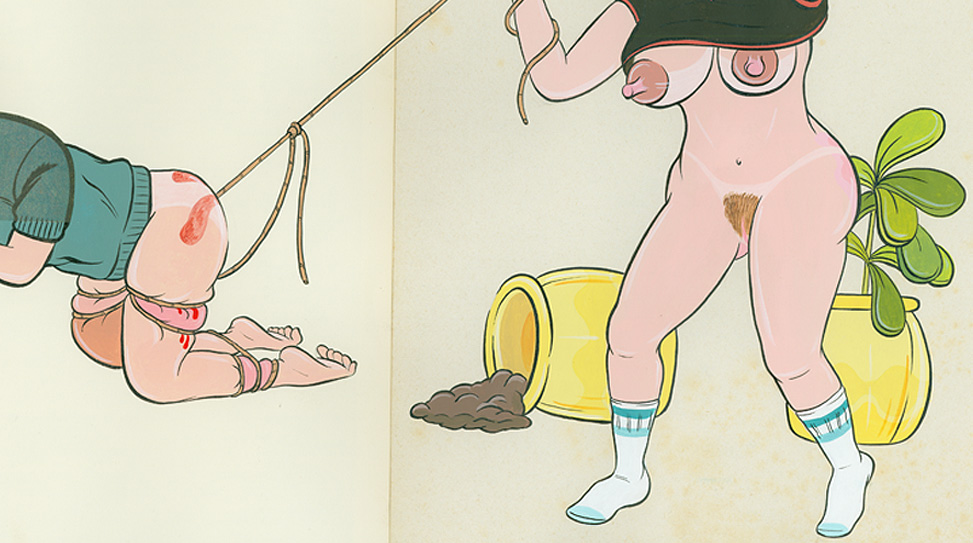 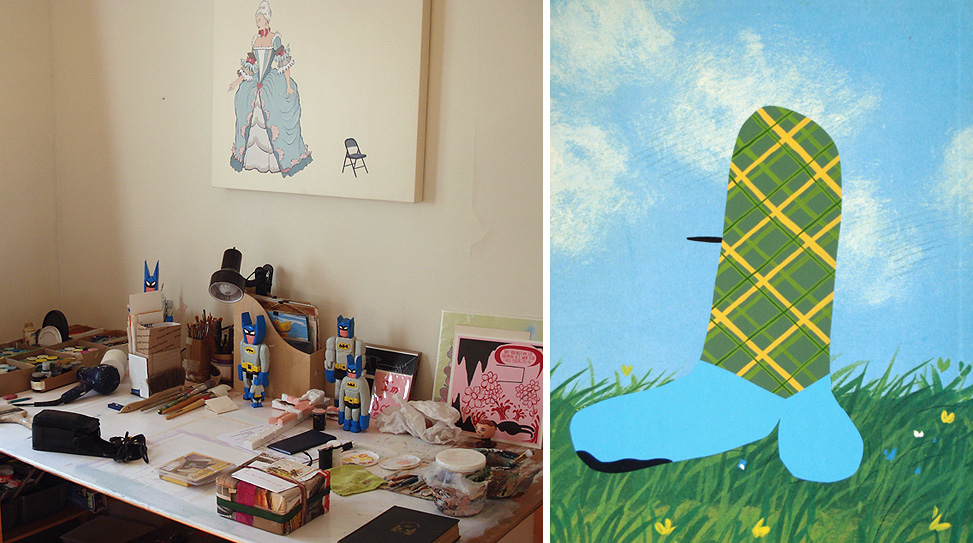 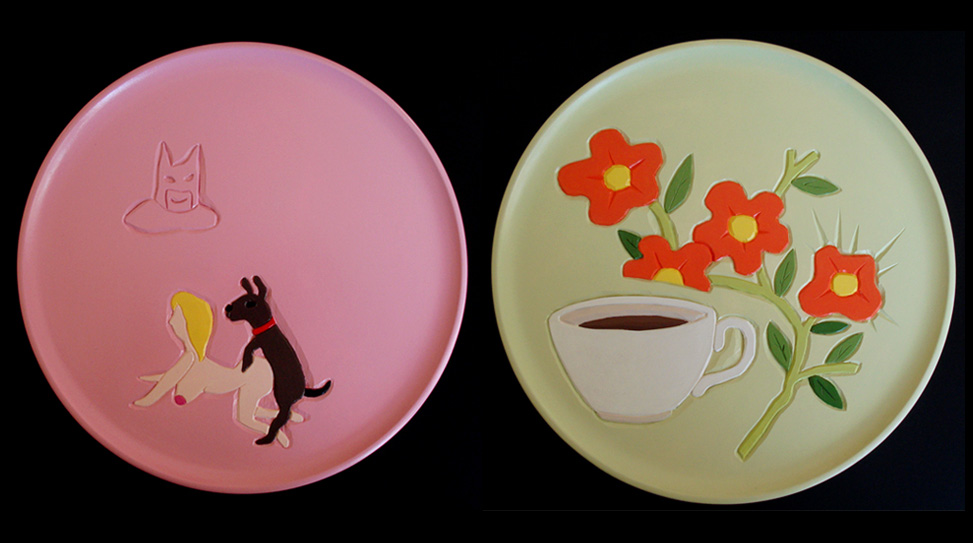 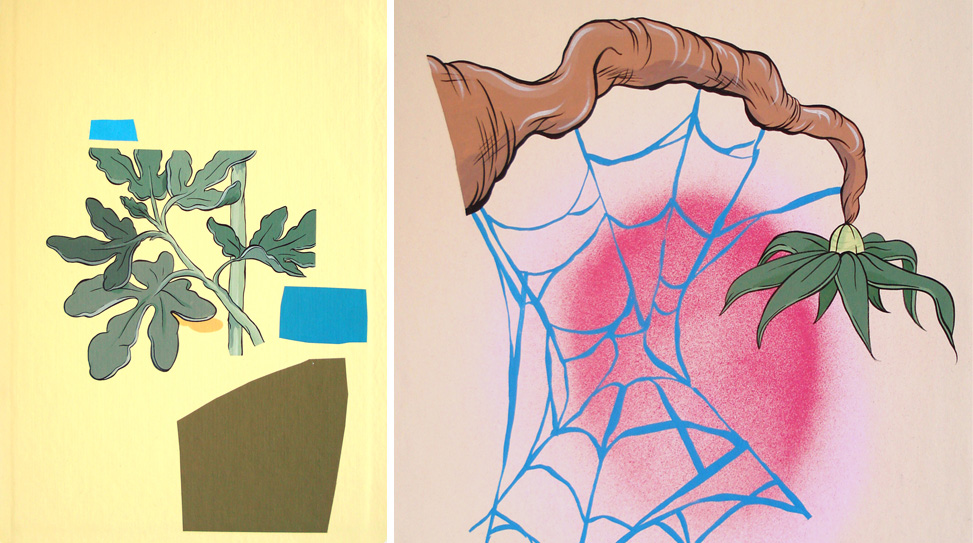 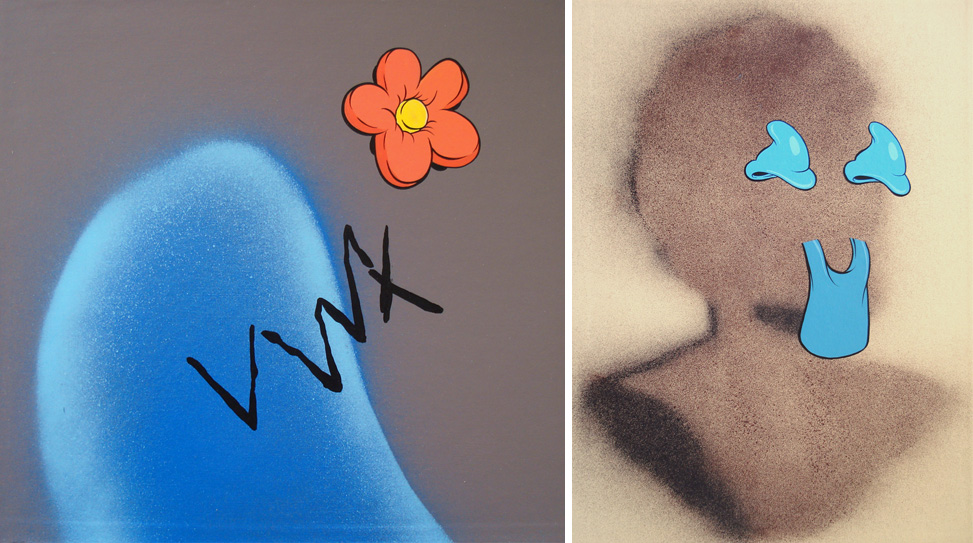 I think it is unethical to force people to digest all the images that they encounter everyday and not let them use them.

We can’t say artist Mark Mulroney emerged unscathed by his travels through the world of Catholic school and the art “Academy.” However, these experiences have given him a unique artistic outlook and the ability to absorb and react to contemporary culture in a way best described as beautifully damaged. Mulroney’s work exhibits a mastery of not only technique but also of recontextualizing popular culture. His surreal landscapes blend abstraction with comic-styled realism…and sure, it’s full of antithetical iconography one might expect from someone who went to Catholic school.

You have the shortest artist statement we’ve yet seen: “People don’t want to die, and they want to have sex.” Can you expound on how this influences your work?

I think almost all art is about looking at death and trying to defy it somehow. Having sex is a way of defying death. I make work about these things because they are what interests me. I wonder about how I will die. As for sex, it is such a rich topic because so many people practice it in so many different ways that it lends itself to endless depictions. How is it that someone gets off watching a woman in a clown suit pop a balloon? That is just fantastic.

You currently live in Syracuse, NY, which is not known as a hot-spot in the art world, and have been noted as saying that you prefer to be away from the galleries and the critics and the scene—to just put your head down and make work. Yet you’ve come up through the art world establishment, with a BFA in painting and MFA in studio arts, and a bit of time teaching after grad school. What made you step off the tracks of “The Academy” program?

Well, for undergrad, I went to school because I didn’t want to get a real job, and it just seemed that art was the easiest thing to do. In Catholic school I had little exposure to art class beyond crafts which were more of a follow the steps and get a papier mache martyr or something. My freshman year in college, there was a humanities requirement and I took a drawing class and liked it. I was terrible at it. Having my work hang for critique and it being among the worst in the class was humiliating. So I practiced, and I got better at it—it was kind of nice, so I stuck with it. Then when it came to grad school, I was working construction and had a friend who went to UCSB, and she said that they paid for everything and gave you studio space. So I applied and went for two years and sure enough, they paid for everything. This was when California had money and school was cheap. I mean it was free for two years. It was fantastic. What I found was that most schools offer you a template—you get your MFA, then you go shopping for galleries, and then you do a couple residencies, and then you get a tenure track teaching job… I don’t know, I just felt like being in school I was making the worst work. I mean, it was cowardice on my own part really. So I quit teaching and took time to figure out what I wanted to make—regardless of an audience and regardless of what anyone thinks about it. And for a couple years, nobody liked any of it. It was pretty bad.

I worry about academic training—and I saw this in myself and in a lot of other people—before they’ve even started making the work, they’ve planned out what they’re going to say about it. They’ve already planned out how to talk about it, and who to present it to, and what audience may or may not like it, before it’s even made. So you have this really calculated work, that feels really clever and smart, but there’s no soul in it, no guts, no mystery. Sometimes it is hard not being around other artists and talking about work but the upside is that it is a little easier to get inside my own head and figure out what I want to make.

Can you explain a bit about your manner of working and your creative process, in terms of generating ideas and producing work.

I work every day even if I have no reason to. I make whatever I feel I am interested in even if it just sits in a box in the attic when I am done. I wish I knew how things are going to turn out but I don’t and so I just make it and evaluate it later. About twice a year I get an image in my head and it is done, it requires no sketching or color tests it is just done. The rest of the time I just work things out in my sketchbook and if I like what I see perhaps it becomes a painting or a wood-carving or a booklet but most of the time my ideas become nothing. I try and ask myself what I want to see made. It is hard to figure out what I want to see when I am influenced by so many sources. Sometimes I make something thinking it is my own only to finish and realize that I just ripped off Courbet.

You did some work a few years ago that ran afoul of some copyright issues. What happened?

I had bought a stack of comics at a garage sale, and the main character in this one is supposed to be a wholesome American teenager but he is always two-timing his girlfriend, making fun of fat girls, defying well-meaning adults or picking on the only black kid in town. You know, this guys’ a total asshole. Everybody in this comic comes off as a shallow asshole, yet this is supposedly the American ideal. I wasn’t trying to get into this whole commentary about society; I just thought this guy’s a dick and this whole comic is basically about this guy getting his rocks off, so why not let him finish, let him do it. So I used the comics as starting points for new collages in which all the characters fuck and kill each other.

I had a show in San Francisco with my wife at the Evergold Gallery. The show went up and the show came down—no problems. And then I did a show of similar work in Chicago a couple months later, and because the title of the show contained the name of one of the characters from this comic book, the company found out about it. I discovered that companies hire people who’s entire job it is to do Google searches on key words involving their characters and their copyright property. So I got a threatening letter that said I had to take down the show immediately and send them all the work and any money that I received as payment for the work. At first I thought it was really funny. Then I talked to a couple lawyers and it was less so. I was told I had a case here and I wouldn’t lose, but it would take three to five years to settle and a minimum of $30,000.00, which I might be able to recoup if I win. I had just done this work because it was fun at the time, but if this thing ever went to court, I’d become the guy who drew boners on comics and got sued for it. So I just let it go. I blacked out the images that are on my website and left it at that. I made such a small amount of money off those drawings that I couldn’t believe they would come after me. Ultimately, I think they just wanted to send a scary letter and it worked.

What is your view on the use of pop culture and commercial images in contemporary art?

Setting aside the legal question. I think it is unethical to force people to digest all the images that they encounter everyday and not let them use them. We have no control over many of the things we are forced to look at. One way to understand and feel like you have a better understanding of your environment is to use those images in your own life in whatever way you choose. To force people to look at all the ads and other images and then tell them that they have no right to use them is unethical.

I have a small show in London at Galleries Goldstein in a few months. Beyond that, all my energy will be devoted to racquetball and becoming a better husband.

For more information on Mark Mulroney check out his Web site.