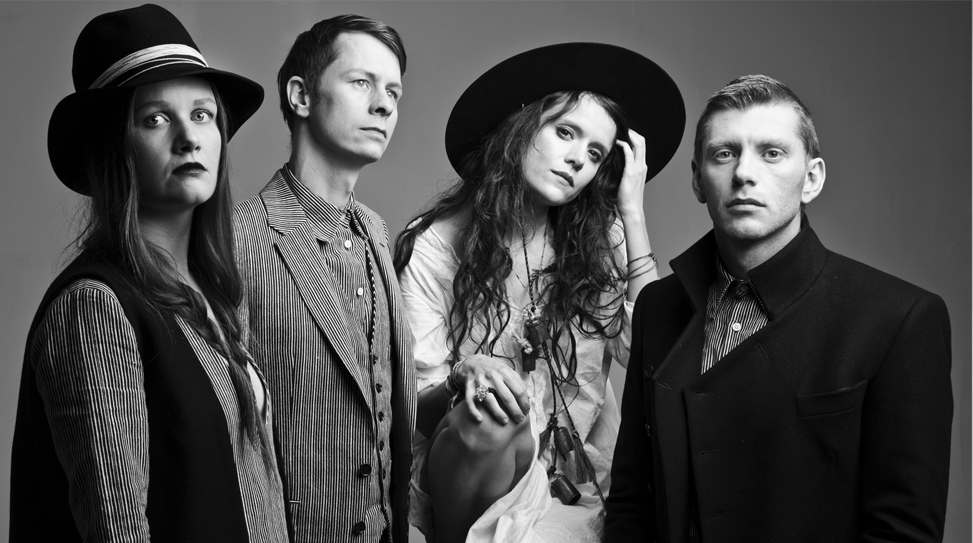 Music is so abstract and it can very quickly take the shape of the ideas that the listeners make it into.

Encased in complexities both sonically and emotionally, experimental-pop collective múm—echoing of their millennium-era rhythms, mechanical music box melodies and groans of mythical creatures from children’s books—remains some of the best of its sort in Iceland’s fertile music scene. Five albums and four EPs later—not to mention an entirely unexpected Kylie Minogue collaboration—we arrive at the Smilewound LP. Formed in 1997 as the brainchild of Gunnar Örn Tynes and Örvar Þóreyjarson Smárasoneing alongside a revolving door of supporting players, the band’s latest record sees the return of third founding member Gyða Valtýsdóttir. Ultimately, múm’s music is niche, an ongoing appreciation for gleefully eccentric sonic detail.

Smilewound is out September 17 on Morr Music.

When you begin work on an experimental record, taking Smilewound as an example, where is the starting point? Is there a fully formed blueprint going into it?

The starting point is usually in the need or urge to start making music again. We have a bit of a cycle. We tour after each album and then we usually turn our backs on múm for a while and focus on something else entirely. Then, after a bit of this and that, slowly the wheels start turning again and the music starts flowing.

Did you guys begin by working on what would eventually become “Toothwheels”, the first track on the album and the single, from the very beginning in the studio?

I can’t remember the exact order of how the songs came to be, but “Toothwheels” was finished quite early in the process. It was the first song we started playing live and the first song where we said, “Well, there’s not much to add here is there? This is done.” It doesn’t happen very often where you just feel that a song is complete. Oftentimes, you need to push yourself to that stage.

Once you find your “beginning”, are you then moving from left-to-right all the way through or is there a lot of shuffling going on between snippets of songs?

It’s all shuffling, all the way through. We don’t focus on one track at a time, but move between them. Usually, that is. Sometimes we obsess over small details for days. For example, we spent two whole days just obsessing over details in a single synth sound on the track “Slow Down” and probably spent a longer time on that one particular sound than on the rest of the song.

The term “smilewound” is interesting because it implies joy and pain, high and low, which is very much apparent in the music, sonically. In terms of the narrative content, what are some of the core themes or issues that you wanted to explore?

We don’t have any preconceived ideas when we go into the music, really. At least nothing we can put into words. We might have some simple sonic ideas, but rather than explain them to each other, we need to do it through music.

Did what came before, specifically Sing Along to Songs You Don’t Know, sort of dictate very early on what direction you would go/not go with this record?

No, not really. I still haven’t been able to evaluate this album properly myself anyway. It usually takes a few years before I can get a sense of what our albums are like. Sing Along was probably the start of a journey into simplicity that we took a bit further on this album and I think we might explore that direction further in the future. The three albums before that were all quite complicated. But let’s see what happens. I have no idea.

How do you know when to stop polishing something and put it into the world? You could essentially work on something forever, especially on an experimental record.

Yeah, like I said earlier, it doesn’t happen very often that you just distinctively feel that a song is complete. When we were young, I think we decided that songs were finished because we were so excited to get them into the world and when we get older, this excitement slowly get’s replaced by experience and the knowledge that at some point the songs are simply finished and there is not always an obvious point where it’s done.

What was it like to have Gyða Valtýsdóttir [piano, vocals] back for the new record after a period of her absence?

It was great. She is in a very positive creative frame of mind, so it was really rewarding for the whole album process. It’s really good for the live set to bring in different vibes.

How do you choose your collaborators? Do they possess a certain skill that you’re looking for or are they perhaps acquaintances of yours?

We usually just play with friends of ours, people we know that have a similar approach and a similar way of looking at things. It has a lot to do with trust because we have a very open process. And because we come from a big circle of friends in our music community, we never have problems shuffling up our line-up.

You’re very much attached to the idea of making albums, not just collections of songs. So how do you go about choosing singles at any given time?

Choosing the singles is often a difficult thing to do because at that part of the process we need to take into account the ideas, the point of view of our label and the promotional people we work with. From our perspective, we try to choose the songs we feel represent the album as a whole if that makes any sense. No, it probably doesn’t, but maybe we try to go with something that we feel implies a certain feeling without putting it into words.

Did you get to experiment with some new toys on the new record?

Yes, we did a lot of this album on new small electronic toys. There is such an upswing in new small electronic toys because, for the last 10 or 15 years, the electronic music market has focused on professionalism and grand machines that tend to be very boring. There are so many playthings now. We used the Korg Monotribe, the Teenage Engineering O-1, Moog Minitaur and the Pocketpiano on this album. These are all great little toys and I take most of them on tour with me.

For our album covers, we work closely with artists we pick and it’s always friends of ours, so it makes communication very easy. With videos, we are actually very hands-off. I don’t know if people realize this, but the visual representation of our songs in most of our videos have absolutely nothing to do with us. They are the visions of the video artists and we don’t take much part in the process, but general listeners don’t seem to quite grasp this.

You tend to write and record in interesting places like schools, a lighthouse and, for this one, an old Baltic farmhouse. Do these places have much influence on your creative process or is there something else feeding that kind of journey?

When we write and record, we often like going to nice places, having good food and relaxing. We prefer a laid back and stress-free environment, so going outside the studio makes sense. There are so many interesting places to go to that we don’t really need to look hard. The places come to us.

I checked out Jack & Diane in New York last year and took notice of “Wheel” then. What was it like working with Kylie Minogue?

Kylie herself was very nice and a pleasure to work with. We were quite happy with the collaboration in the end, but the amount of nonsense from the record label people around her made it seem for a while like it wasn’t worth it. But, in the end, the song and recording is what matters and that came out very well. As you said, it was a part of a film score we did and we would love to do more of those. We will probably look in that direction in the future.

What do you think listeners might be surprised to find out about múm’s music that’s perhaps not readily apparent?

I think if people listen openly to our music and let go of any preconceived ideas, that’s going to be when they are surprised. Music is so abstract and it can very quickly take the shape of the ideas that the listeners make it into. Music is in the ear of the beholder. Or something like that.

What do you miss most about Iceland when you’re away, aside from loved ones?

Swimming pools. We have really nice hot water and a good culture around that. I haven’t really found anything similar anywhere else except possibly the onsens in Japan and the saunas in Finland, but still, it is quite different.