Raised on a steady diet of post-punk, hedonistic warehouse parties, and fogged out basement jams, the formation Red Axes was inevitable. 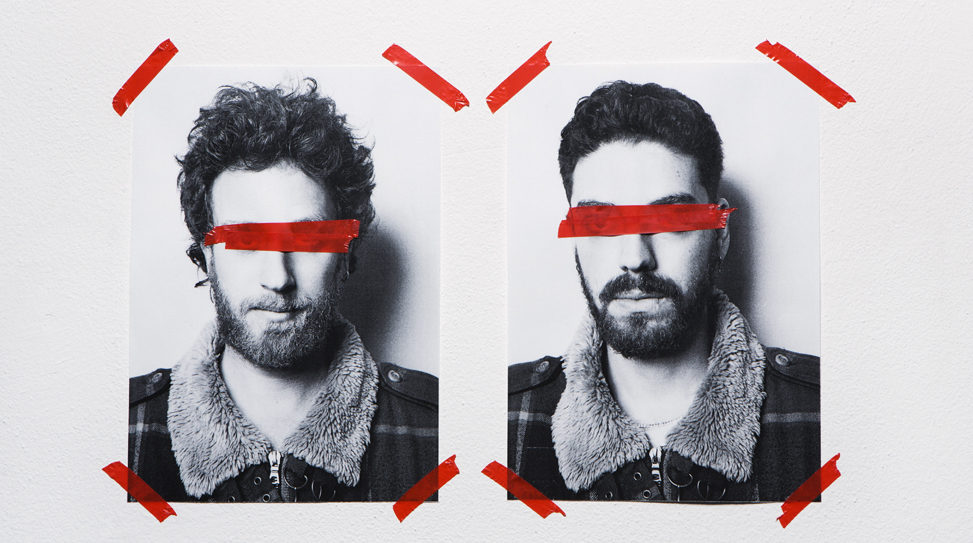 Raised on a steady diet of post-punk, hedonistic warehouse parties, and fogged out basement jams, the formation Red Axes was inevitable. Tel Aviv’s Dori Sadovnik and Niv Arzi have been friends since they were kids and have travelled the same path musically, starting out with their first band called Red Cotton. At the time of Red Cotton’s birth, the two musicians were heavily inspired by a variety of underground sub-genres of the western world during the 70s and 80s, ranging from new wave, synth pop, punk, and even italo disco. But there is one thing that you have to understand—Dori and Niv were never club kids. The music responsible for their upbringing served as a gateway to unconventional dance music of the highest regard, and you can hear exactly that on their debut LP entitled “Ballad Of The Ice.”

Upon listening to Red Axes’ full-length effort for the first time, the duo’s extensive digging, research, and references were already apparent. Their time spent between rock shows and clubs helped them reach their goal of creating something relatable and truly unique. It made perfect sense for Cosmo Vitelli of I’m A Cliché to release this record, as that label represents a musical identity that Red Axes fully embrace. “Ballad Of The Ice” covers a lot of ground while maintaining a consistent, well thought out vibe—there is a Bahaus cover, collaboration with a legendary Brazilian artist, and several psychedelic intermissions. With this record, Dori and Niv are not just producers, but artists as a whole. In an era where we are obsessed with nostalgia, Red Axes achieved something against that grain while still paying homage to the underrated greats that came before them.

Can you tell me about your musical beginnings and the band you were in before becoming Red Axes?

We were making music since we were kids in all sorts of bands and textures. Before Red Axes we were in a post-punk band called Red Cotton. We independently recorded an album and then we split the band and started the Red Axes project 5 years ago.

How would you describe your musical tastes and interests during the Red Cotton era?

We were listening then more to rock and punk, a bit electronic music as well but not too much dance music.

What do you consider your main introduction to dance music? There seems to be a decent scene in Tel Aviv these days, but how was it growing up?

Our first impression of dance music was when we were in Amsterdam with the band. We lived there for a while and started getting into the whole club music thing by going to parties. There has always been a strong club scene in Tel Aviv since the 80s, people like to party hard, but as teenagers we were more interested in live shows and rock n roll than parties.

Were there any DJs that you greatly admired growing up, or did that stuff come later? When did you guys start going to clubs?

Definitely later. It was a long process that we are still undergoing – discovering DJs and producers from different periods in time.

When the two of you first started making tracks, did you have a specific vibe in mind prior to working, or was it entirely a natural process? It seems that the Red Axes material references a lot of your original musical influences, but it’s still contemporary and definitely danceable.

When we started making electronic music it was very new to us, to be in a clubby state of mind. It took us time to technically produce a track that we like and to find the right vibe that will suit the club as well as our musical preferences. The sound evolved organically, but it took us time to explore.

So how did you link up with Cosmo Vitelli and I’m A Cliché? Cosmo’s taste must be quite similar to you guys as I can hear and see how you guys relate sonically and aesthetically. To me it seems like a perfect match.

It seems like a perfect match to us as well. When we first started releasing stuff, there were a few labels that we liked and wanted to work with – I’m A Cliché was one of them. We sent Cosmo our stuff and we were very glad to hear back from him and to see that he was interested in our music. Working with Cosmo and the label was very challenging and productive for us, and took us to a place where we felt we were ready to release an album

Before you guys joined the label, did you have any favorite I’m A Cliché tracks that you always loved from before?

Yes, we really liked the first Bot’Ox album and a track by It’s A Fine Line called “Grease.”

I read that you guys started off with a residency at a club called the Bootleg in Tel Aviv. Was this your first residency? And how did that begin?

Yes, it was our first residency. We played there a few times and got a good connection with the owners. From there it all happened naturally. We like the place very much and there are some excellent parties going on. Also, it is the only club that is right in the center of Tel Aviv, in a basement under a legendary records and DVD store called The Third Ear. We are still residents there to this day.

Was this residency your own party, “Break It!” or did that come after? What was that party all about?

Break It was around before the Red Axes project. It was just a group of friends that share the same passion – good rave music and underground parties. The parties were all about having fun and trying to bring some fresh sounds. The place was an abandoned soda factory in the east of Tel Aviv.

Personally I feel like having a residency early on in your life as a DJ is one of the most crucial things, as it’s sort of like practice for reading crowds and expanding your library on a regular basis. Was your experience at Bootleg anything like that? Who were some of the guest DJs that you’d open for?

Yes, doing the residency at the Bootleg is perfect for us. It’s a good room for “training” and trying out some new weapons. Also we can host some DJs that we really like for example Cosmo Vitelli, Ivan Smagghe, Jennifer Cardini, Marc Pinol, Comeme crew, Optimo, and many more.

After releasing several EPs, what spawned the decision to do a full-length record? How did you go about writing and recording differently than you normally would for an EP?

After a few years of making music as Red Axes we felt ready and we had enough material and vision for an album. Also we had a great push from I’m A Cliché. Working on the album was quite different because we were searching for the whole story and context less than thinking about every track individually.

Tell me about the collaboration tracks with Abrao Levin and what the process was like working with a vocalist. I imagine he’s somebody you guys have always admired since the beginning, so that’s really cool you got to work together.

We met Abrao a long time ago during the Red Cotton days. He was in some really good Brazilian post punk bands back in the eighties, but nowadays he lives in Israel and not many people know what this guy is capable of. A few years ago we were searching for a vocalist so we sent him an instrumental track and he sent us back a home recording he made (Caminho de Dryfous) and it felt just right. So we kept working in the same process.

I also really like the music video for “Papa Sooma.”  Where was that shot? Did you guys work with the director on that, or was that mainly his vision?

The clip was shot in the Dead Sea in a deserted beach, which is quite dangerous because there are a lot of sinkholes there – a unique geological phenomena that is like pools of acid. That is what you see in the video. Our friends Ari Pines and Roi Shur directed it, and it was their vision. They did it with zero budget using a drone that they got from another friend. It all came out very well.

Did you guys invest in any new gear for the making of the LP, or has your studio setup remained the same for a while? What does your studio consist of?

We always like to collect new and old stuff, and during the album time we opened our eyes a bit more. We used things like an old Italian organ and Casios we bought in the flee market, along with a Juno106, Tascam 4-track cassette, a Fender Telecaster guitar, and some tape delays and FX units.

Are there any songs on the new record that you were especially pleased with, or maybe took longer than others to finish?

For us it’s changing almost every day and really depends on the situation. Of course some tracks took more time than the others but after it’s finished we forget about it and it doesn’t matter.

More about Red Axes on I’m A Cliche