The veteran actor on his Obama interview, who should direct his biopic, and Warwick Thornton’s period Western Sweet Country. 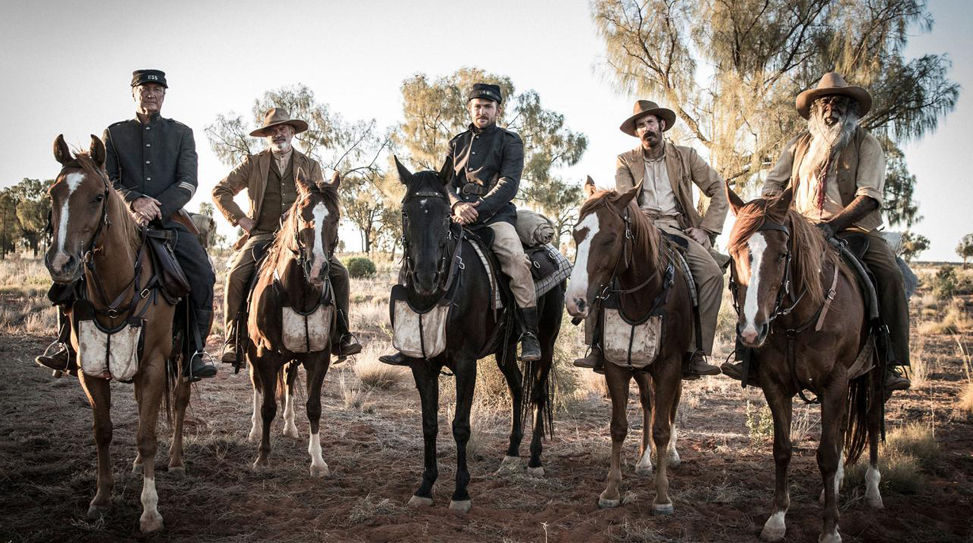 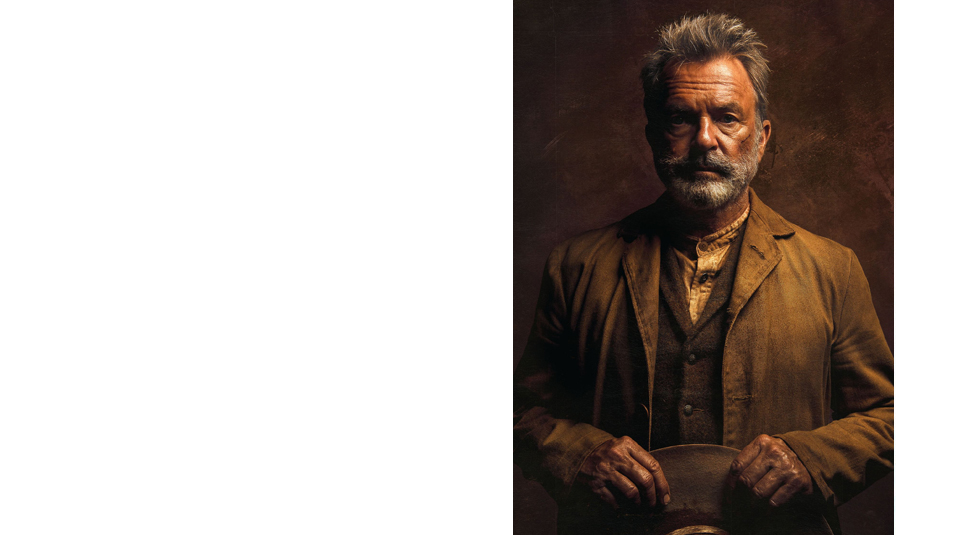 Sam Neill is a very pleasant conversationalist. Everything he says is measured and convincingly deliberate. He’s unhurried in his words. There’s a warm, lullaby cadence to his manner of speaking that makes your mind wander and wonder—he would probably make really great ASMR videos.

Last month, the veteran actor sat down to chat with another alluring speaker, Barack Obama, in front of an invite-only audience hosted by New Zealand’s poet laureate Selina Tusitala. It marked the former US president’s first visit to the country, where Neill was born and currently resides. The Kiwi, now 70, seems to spend every waking moment hanging out with his army of farm animal friends—follow him on Twitter—all affectionately named after his industry colleagues: Anjelica Huston, Helena Bonham Carter, and so on. Neill owns four organic vineyards in the Central Otago region and produces his own award-winning wine, Two Paddocks, which he takes great pride in. For someone who has spent more than four decades pinballing from one continent to another with acting—some 80 films and 60 countries at the last count—life at home is an important anchor.

Having made a cameo in Taika Waititi’s Thor: Ragnarok and starred in Jaume Collett-Serra’s The Commuter more recently, Neill is balancing the mainstream and the arthouse with the release of Warwick Thornton’s Sweet Country, which picked up the Special Jury Prize at the Venice Film Festival and the Platform Prize at the Toronto International Film Festival in 2017. Inspired by real events and set in the late-‘20s Australian Outback, Sweet Country tells the story of an aboriginal station hand who goes on the run with his wife after killing a white settler in self-defense. Neill plays a preacher who’s decent to his indigenous workers and believes that all men are equal in the eyes of God. But he’s just about the only white man in the remote Northern Territory to believe it.

What did you take away from sitting down to chat with former US president Barack Obama?

It was a great privilege. I was completely surprised that I was asked, given that I didn’t feel qualified for the job. [Laughs] We had a wide-ranging discussion on stage. I was very taken by his charisma. He chooses his answers very carefully. His answers are always very to the point and very illuminating. In some sense, I guess it was a general discussion about leadership. There were certain things that were more direct, of course. I think the protocol with these things is that you do not discuss the current administration. Presidents never do that so there were things that were off the table. But other than that, he was happy to talk about everything. He talks at length. He’s very funny. He’s a really interesting man. It was really great to spend some time with him.

Looking back, it was probably more inevitable than it seemed at the time. My family were in wine and spirits for 150 years before I started growing my own grapes. I’m the first in my family to actually become a wine producer. I’ve been growing grapes for 25 years now and last year we were at our 20th vintage. It’s kind of interesting to be an actor slash wine producer, given that other things that actors do are very often not taken terribly seriously. I always feel that I was seen by most people as a slight bimbo. [Laughs] I think it’s taken 25 years for the wine, which had already been exported and interesting and good, to be really taken seriously.

Now you can go by wine producer slash actor. So Sweet Country is Warwick Thornton’s second feature after Samson & Delilah, which picked up the Caméra d’Or at Cannes in 2009.

I’d seen Samson & Delilah and thought, “This is a really interesting voice.” If you ask me whether I had jumped at the opportunity, I’ve always been a big fan of the Western. It’s a Western set in another sort of frontier and, of course, it’s a commentary on Australian history.

The film explores a dark area of Australian history. There are obviously historical details in every country that we don’t really like to talk about, if they haven’t been borderline erased anyway. How have Australians responded to the film?

We got an amazing response at the Venice Film Festival and that helped in Australia. Look—it’s uncomfortable to Australians. But we’ve received fantastic feedback. Not all of Australian history is easy to discuss. I’m obviously not from Australia. I’m from New Zealand so I can only speak from an outsider’s perspective. I think, particularly in the last ten years, Australians have been more willing to get to the truth of their own history and not be so distant from their past, which is an uncomfortable one. People were kicked off the land that they were on for millennia. Some Australians are increasingly open to engage with their past.

Was this really your first Western—after 80 films? You’ve done everything else.

Yes, although it’s not a full Western, obviously. The form and the genre are certainly Western and it takes a lot of those tropes. But it takes unusual turns. There are also other themes in there: consider the damage done by World War I. After years on, there’s still trauma from those years in the trenches and collateral damage to the families and communities from that trauma.

In your four decades in acting—from indies to the mainstream spanning continents, diverse characters, and genres—what has been the driving force behind your decision-making?

With acting, I think it was a process of elimination and probably the only thing I could do. I remember talking about this last month. It’s as much about the people that say no to you as it is about the ones that say yes. Some of that can be very useful—some rejections turn out to be very positive things. This was certainly one of them.

You’ve been called New Zealand’s first movie star and remained prolific. Since 1979, you’ve consistently worked on four or five projects a year, everything from Jurassic Park to Hunt for the Wilderpeople. Can you recall any films that you had real reservations about doing that you were ultimately really happy to do?

Hmm… [Laughs] That’s good. Well, there was the notorious FIFA film [Frédéric Auburti’s United Passions, a 2014 English-language French drama], which an entire 27 people in the world have seen. I had some reservations about this. I asked one of my fellow actors, “Do you think we should be making this film?” and he said, “Listen—this film is going to put my kids through college, okay?” That made sense, and that ended up being one of the most enjoyable films I’ve ever done. Commercially, it was probably the most catastrophic, but I had a ball.

What can you tell me about Francis Annan’s Escape from Pretoria that you’re set to star in with Daniel Radcliffe? Have you already started filming?

I have a couple of films to do in Australia first. I haven’t heard anything about that for a while. I never really entirely believe that movies are happening until I’m about three days into production. [Laughs] So we’ll cross that bridge when we come to it. There are two different ones that I’m about to start and a whole bunch of possibles for later in the year. It’s about time I did something in L.A. I haven’t done that in awhile.

Do you remember who you said should play you in a movie to The Guardian in 2016?

Who did I say?

[Laughs] Yeah, I’m sticking with Tilda. She can do anything.

So who would direct the Sam Neill biopic?

Maybe Guillermo del Toro. Maybe he could invent some things to spice up what’s really been a pretty ordinary life.

Far from ordinary! By the way—what’s the deal with all of these articles going up right now about you having auditioned to play James Bond, which ultimately went to Timothy Dalton? Did you just reveal that after all these years?

I have no idea why people are into this. I have no idea… I honestly want to kill myself every time I hear the question. I’m starring in Peter Rabbit right now and I guess it’s always good when there are moments of controversy. There’s a moment in that film where Peter Rabbit thinks about—not to put too fine a point on it—sodomizing the cat with a carrot, and later on in the film, another character gets bombarded with blackberries, which he’s allergic to. That alarmed parents with children with food allergies. There’s just always something that catches people’s attention.

What would really excite you, material-wise, if it came across your desk right now?

I’m up for anything: stories I haven’t heard before and characters I haven’t played. It’s limitless.