On the surface, Zoe Kazan seems like every other Hollywood commodity we’ve stocked up on—affable and beautiful, the impossibly perfect girl next door—but spend some time with the 27-year-old and you’ll walk away knowing she stands apart from the desperate huddle of other actresses and default famous daughters. Crucially, with her feet firmly planted in […] 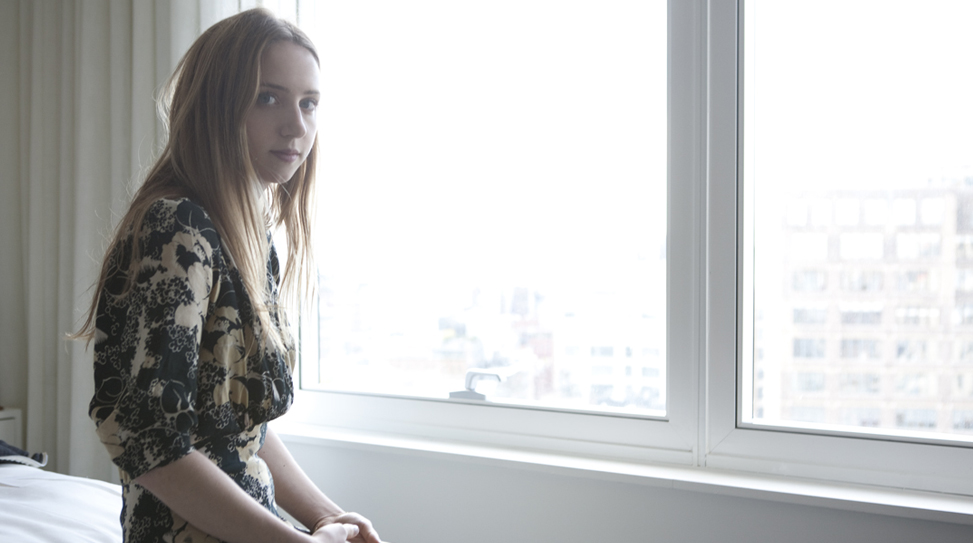 On the surface, Zoe Kazan seems like every other Hollywood commodity we’ve stocked up on—affable and beautiful, the impossibly perfect girl next door—but spend some time with the 27-year-old and you’ll walk away knowing she stands apart from the desperate huddle of other actresses and default famous daughters. Crucially, with her feet firmly planted in both film and theatre as a thesp, Kazan also divides her time as a playwright and screenwriter—clearly following in the footsteps of her screenwriter parents and her grandfather Elia Kazan, the legendary Broadway figure who discovered Marlon Brando and James Dean.

After graduating from Yale’s prestigious drama program in 2005, Kazan made a rather highbrow entry into the New York theatre scene a year later with a role in The Prince of Miss Jean Brodie starring opposite Cynthia Nixon. More recently, she took to the stage with A Behandling of Spokane alongside Christopher Walken. A workhorse in all manner of the word, Kazan has also hit the big screen with some of Hollywood’s most seasoned actors—everyone from Anthony Hopkins to Meryl Streep, Julianne Moore to Philip Seymour Hoffman—in her 5-year young career.

Following her breakout role in last year’s The Exploding Girl and last month’s Happythankyoumoreplease, 2011 sees Kazan complete a hat-trick. In Kelly Reichardt’s Meek’s Cutoff, she’s thrown into the early days of the Oregon Trail with co-star Michelle Williams—bonnets and all. Set in 1845, the film follows six pioneers and a mountain man they’ve hired to lead them on a journey across the high-plains desert in their search for new dwellings. Long story short, they get lost and face the scourges of hunger, thirst and their lack of faith in each other’s survival instincts.

Did you have any idea that The Exploding Girl, a movie made on a barely-there budget, would get so much attention on the festival circuit?

Definitely not! My agency didn’t even want me to do it because, although Brad [Rust Gray] and So [Yong Kim] are amazing filmmakers, they didn’t have the indie game down. My agents would talk to them about budget and they’d say, “We’ll find the money.” That’s when my agents would tell me, “You can’t do this movie. These guys don’t know what they’re doing.” But I believed in those guys and we had really good producers onboard, so I kept telling my agents, “They know what they’re doing! They just don’t know how to talk about knowing what they’re doing.” [Laughs] We made that movie for 40 thousand dollars, which is basically no money. When the ball started rolling, I was just really excited that it was even getting made. It was one of the happiest times I’ve had on a set because Brad and So are some of my best friends. If it had just ended there, I would’ve still been happy to have gotten it made because it seemed as though we were against all odds. The fact that I liked the finished movie was a miracle, and when it got into festivals and someone decided to distribute it, those were more miracles. Everything that happened was a miracle on The Exploding Girl. I’m so proud of that film.

Now you are in a Kelly Reichardt film, which is exciting. How familiar were you with the early days of the Oregon Trail prior to working on Meek’s Cutoff?

I grew up in California and I remember them teaching us about this era every single year in grade school. We did projects on the pioneers where we would dress up like them. That period always seemed so sentimental and romantic to me because there’s so much American-ness to it. Kelly is an amazing filmmaker and I really wanted to work with her. Jon [Raymond] wrote an amazing script. There were a lot of factors involved that made me want to get involved. This is totally geeky, but I also wanted to wear a bonnet! [Laughs]

How would you describe Kelly’s overall directing style?

I don’t mean this in a bad way at all, but it’s not just about the acting when it comes to working with Kelly. Michelle [Williams] is obviously amazing in Wendy and Lucy, and the performances in Meek’s Cutoff are certainly very good, but the rigor of Kelly’s filmmaking has so much more to do with the technical things. I don’t mean to disparage anyone’s work, but it has so much to do with her unique approach to things like sound design. She makes art films that don’t rely on conventional storytelling techniques and the actors aren’t her sole conduits—I really admire that. Her approach is sort of unusual because a lot of other directors tend to tell stories in a more conventional actor-driven way, you know?

I would think certain actors might take issue with that, especially if they have an inflated ego or something.

It’s certainly not for everybody. I think some actors might feel as though they’re being left out of the creative process in a way. But Kelly is a very inspiring leader. The laser-like focus that she has is so much better than someone who doesn’t know what they want. Sometimes she was more focused on the camera than the performers, but I think she has a really honest vision and she won’t let you get away with anything. It’s funny because I worked with Brad and So—who happen to be friends with Kelly—on The Exploding Girl in a similar way. They share this similar thing where they don’t talk to actors in a method way. I remember Brad would come up to me and say things like, “That doesn’t look real. Why are you doing that with your breathing?” and I’d be like, “I don’t know why I’m doing that.” Kelly would be like, “What are you doing? Do less. Don’t do anything. Just stand there.” [Laughs] It’s a different kind of acting, I guess.

It makes sense considering that Kelly’s films are very observational and she stresses subtlety to the point where it becomes a style in itself.

Exactly. And it’s never manipulative. She never tells the audience how to feel.

How do you prepare for a role in a period piece, especially when you’re working with a director who so strongly pushes for authenticity?

Kelly brought everyone stacks of journals to read and photographs to reference. My mom had actually done, strangely, a lot of research on this time period and I got her to send me a bunch of books to read as well. Then we had Pioneer Camp for the first couple of days before we started shooting where we learned how to lead oxen, how to start a fire without matches, how to gather firewood, how to strip pieces of bark, and identify various plant life in the surrounding area. It was a fascinating experience. It was really important because we had to make sure everything looked just right since there’s not much dialogue in this film.

Did you strip yourself of any modern luxuries while working on this film? How “method” did you get?

It’s funny because we were so isolated and far away from any city when we were shooting this film. Even though we had a TV, computers and stuff like that, the Internet service wasn’t great and we had no cable. Obviously, we had cars and cellphones, but it felt like an immersive experience overall. I cried when I finally got on the plane to go home after the shoot because we had become so enmeshed in this little world that we created. It’s almost like I had forgotten that I could just get on a plane and go home. I know this sounds fluffy, but leaving this world was strangely hard. It’s like Stockholm syndrome, actually. I don’t know why I felt so nostalgic for the place because it was a really tough shoot. But as soon as I left, I was like, “I loved it! I miss my cattle… ” [Laughs]

Can you recall specific days or certain scenes that you found particularly difficult and unpleasant?

I got really bad heat stroke one day and threw up. It was not fun. Then there were those days where it was so incredibly cold, bitterly cold, with sleet and snow. It’s not like you can incorporate a jacket into your wardrobe when you’re working on a period piece. Then you have days where you’re hungry because, for whatever reason, you decided to skip lunch and suddenly there’s no more food. And you’re in the middle of fucking nowhere. [Laughs] Honestly, it all blends together. It was a 7-week shoot with all this dust flying up into the air. But it was a priceless opportunity. America is so huge and I’ve only really seen the coasts since I have family up-and-down the Eastern and Western seaboards. To see this totally alien place that I’d never have the opportunity to see otherwise was pretty awesome.

Did you ever reach a point in this unforgiving environment where you were in so much misery that it didn’t call for any acting at all?

Oh, totally. [Laughs] It’s like the books that say, “No acting required.” At a certain point, this movie was like no acting required. You get tired, homesick, really dehydrated, unbelievably cold, and you just don’t have to do any acting.

You’re obviously better known for your film work, but you do a lot of theatre work as well. Do you feel more passionate about one over the other?

Honestly, it doesn’t feel that separate to me although I do think theatre is an actor’s medium whereas film is ultimately a director’s medium. I love movies more than theatre from a viewership perspective because my love of movies got me into acting in the first place. But I’ve really enjoyed what theatre has afforded me in terms of getting to play different kinds of parts and go really deep into a character, in ways that you can’t on a film set. Spending 6 months playing a character and learning it inside out is a phenomenal opportunity that you only get in the theatre, really. In that sense, it’s very different. At the same time, I haven’t tried to set aside time to do one over the other. My career so far has mostly been dictated by me saying, “I really want to do this part” or “I really want to work with these people.” It doesn’t matter so much if it’s theatre or film. I just spent a full year doing theatre from January 2010 to the end of January 2011 with the exception of 5 weeks, so I’m tired of theatre right now. [Laughs] I won’t do another play for a long time.

Theatre sounds so taxing to me.

I think people think of theatre as this rarified thing, but frankly, there’s never any money, it’s super long hours, and it’s a really hard job. It’s not for pussies! [Laughs]

Besides writing plays, do you write screenplays as well?

I do. I wrote a screenplay that Paul [Dano] and I’m going to make together, actually. I basically write because I would go crazy if I didn’t. There’s so much downtime for an actor that I need something to do besides going to the gym.

I just recently found out that you were dating Paul. Billy Kidd told me.

Billy! He’s such a good photographer. I love working with him. Paul and I’ve been together for over 3 years now. We met while doing a play together Off Broadway in 2007.

What’s next for Zoe Kazan?

I just wrapped on Angels in America and concentrating on this new screenplay that I told you about.