The kickoff to our new on-going series of talk with touring bands, in search of wild banter, laughs, and indispensable “road sage.” 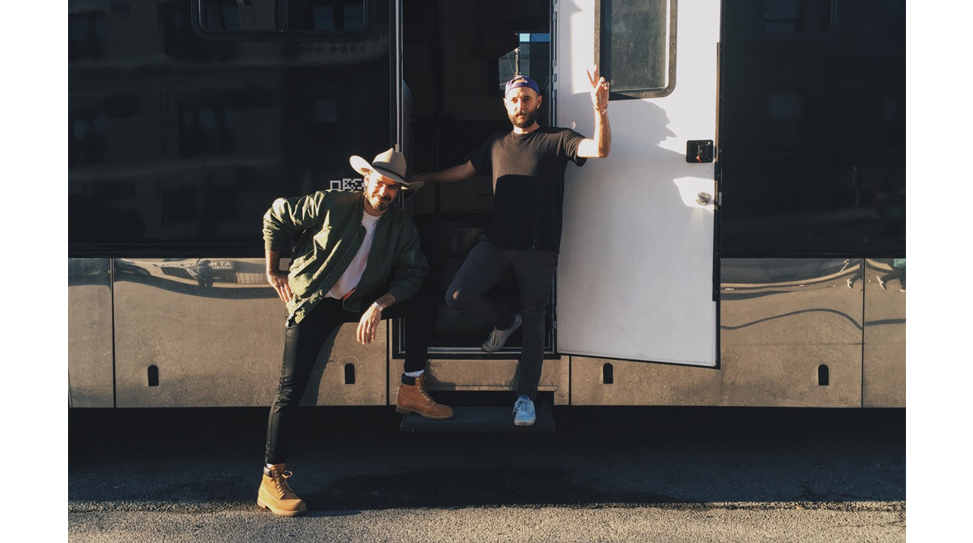 Chris Stracey and Jack Glass on the road in North America.

Some of them have been unexpectedly awesome, like Saint Paul, Minnesota. I didn’t know if anyone would really know us there and it ended up being a full venue.

The purveyors of disco pop of the tallest order and Australia’s national treasure (obviously), Bag Raiders has popped exuberant confetti canons into our collective earholes with not one, but three EPs over the past eight months. Waterfalls, Friend Inside, and their latest Checkmate are tantamount to good taste and the hallmarks of their past hit singles like “Shooting Stars,” “Way Back Home,” and “Sunlight.” A follow-up to their 2010 self-titled debut, the soundscape warriors’ long-awaited sophomore album, aptly called Horizons, is scheduled for release this summer.

Meanwhile, the Sydney duo, Jack Glass and Chris Stracey—who have been performing live with their friend and drummer Felix “Blocko” Bloxsom—are currently wheeling their tour bus around North America to finish out a string of remaining shows, bringing their feel good parties to the masses the only way they know how. For this inaugural edition of our on-going series, Road Trippin’, we called up Bag Raiders in the middle of their 30-date tour to share a conversation about anything and everything tour-related, fishing for stories, tips, and laughs—good “road sage.”

Did you make it to Salt Lake City?

Have you been playing a lot of cities you haven’t played before on this tour?

Chris: Totally. We’ve probably done around half of them before, but the other half are all brand new. It’s been fun and exciting to see some other parts of America.

I think you’re more than 20 shows in now. How are you holding up?

Did you run out of Milo, yet?

That was my way of telling you I did my research.

What other tour necessities do you take on the road with you?

Chris: We brought a blender.

I saw on Instagram that someone recently gave you a guitar pick made out of an iTunes gift card. Is this common? Do people come up and give you things at these shows?

Chris: One guy donated us this really big Sharpie that was really cool. But we lost that two days later. We’re sorry about that, man. Some people want us to sign their t-shirt or vinyl so that came really handy, but someone stole it. Somebody donated us a beer koozie and that still lives on the bus. We got a saddle blanket as well. So people have been very charitable. If anyone’s reading this and we’re still on tour, we still need—

Jack Glass: Decorations for the bus.

Chris: Yeah, there’s a lot of free wall space that should be taken up with knick-knacks. An arcade game would be good, like Street Fighter, if you have one of those lying around. [Laughs]

You guys are fun-loving and adventurous, and big on food and drink. How do you go about finding local hotpots when you visit new cities while touring on the road?

Chris: Good question. We’re big on coffee and there’s this app made in Australia called Beanhunter. Yelp is okay, but the best is local knowledge. If we go to a cool café or bar, we ask them where we should go and they will generally hook us up with some good tips and whatnot.

What’s the secret to having a smooth tour?

Jack: Mainly, it’s about knowing that you’re going to be at a lower level of comfort or whatever than what you’re used to. But it gets off-set by having all these experiences that you wouldn’t be allowed to have otherwise and seeing all these new places and playing in front of all these new people. It’s good times! You just need a chill, open outlook.

Chris: Don’t be a baby! Embrace it. Enjoy the ride.

Great work on the Waterfalls, Friend Inside, and Checkmate EPs by the way. They’re all so, so good. They’re happily living on my workout playlist right now.

Prior to releasing the three EPs quite close to one another with Checkmate literally coming out just two weeks ago, you went through a lengthy period without releasing anything.

Chris: Yeah, I think we had maybe three years in-between when we were holed-up in the studio, working hard. It just took a while for us to get the ball rolling, but we feel good having the EPs out now. We have an album coming out in June as well.

Did you find a title for that album yet?

Chris: I think it’s in a similar vein to the EPs. There’s singing over every track. It’s more raw, live-sounding. In the same way, it’s dance-y except it’s not really pop music, you know?

You’ve amassed a lot of tracks over the years, and you don’t follow trends and keep everything fresh. Is it as simple as going with your gut feeling and doing what you like?

Have there been shows on this tour that sort of stick out for whatever reason?

Chris: Some of them have been unexpectedly awesome, like Saint Paul, Minnesota. I didn’t know if anyone would really know us there and it ended up being a full venue. That was maybe the wildest crowd. Also, Detroit was really wild.

Chris: Totally up for it. Nonstop dancing. Very cool!

That’s very cool. I actually grew up in Minnesota. With such a frenzied touring schedule, I wonder if you have the chance to really explore these different cities.

Chris: Yeah, I had a bit of a walk around Saint Paul. It’s fucking cold there. [Laughs] Everyone there was like, “What are you talking about? It’s beautiful! It’s such a nice day!”

You’re ending this tour in Vegas. I want to believe that was a coincidence.

Chris: It was a total coincidence! But we will go out and party.

And then you’re off to play a round of shows in Australia following a small break?

Chris: We’re going to play a bunch of venues there. We’re doing a couple DJ afterparty things as well. It’s always good to go back home to see friends and family. We’re looking forward to it!

Do you get homesick on the road?

Chris: “Studiosick.” We miss the studio. But it’s fun to travel. Traveling is great!

Is there anything high up there on your list of things to accomplish moving forward?

Chris: It would be cool to do a leisurely tour through Southeast Asia, for a few months maybe.

Jack: Yeah, that would be really cool.

Chris: You know what? A place that we’ve never really been to, although we did go to DJ, are those Nordic countries. It would be cool to pop into the Netherlands. And Japan. We’ve never played live in Japan.

Jack: I would love to go and play in South Korea.