A revisit with the actress/musician about her 14-year-old debut opposite Scarlett Johansson and why she feels “thoroughly haunted”. 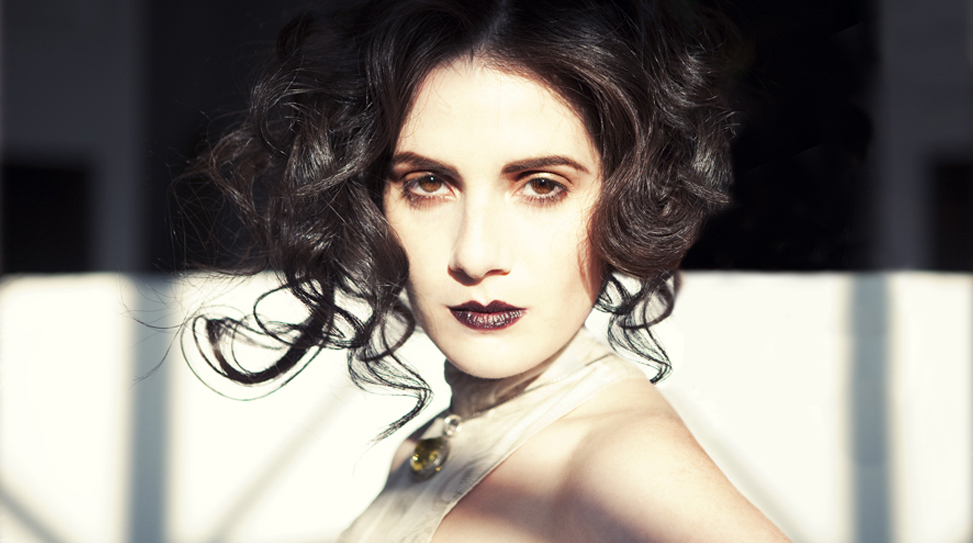 The weight of being a human is the most breathtaking thing and the most horrific thing.

When Aleksa Palladino arrived on the set of our photoshoot in New York, her disarming charm was intoxicating. There’s an easygoing spirit and quiet confidence about the 33-year-old actress who speaks softly and seems to lack the domineering ego that one might assume pervades most actor archetypes. Her smile, when it flashes, is entirely genuine. Her singular voice, slightly raspy with a hint of an accent—she’s a native New Yorker—is instantly memorable.

Onscreen, Palladino excels at inhabiting characters that are at once damaged and dangerous. She’s effortless in her ability to radiate emotions like a filament about to erupt, with a tenderness and honesty that gives her a gravitational pull. With a long list of leading roles in independent films under her belt, she’s perhaps best known for playing Angela Darmody on Boardwalk Empire—Michael Pitt’s dreamer wife who was unexpectedly gunned down in the hit HBO series. Palladino’s career will continue to soar towards a brighter future, not only in film but also in music as she commands the stage as EXITMUSIC with her husband, Devon Church.

What can you reveal about your background? Broad stokes are good.

I was born and raised in Manhattan. My mom, my grandparents and I all lived in the same apartment. It was a pretty unique experience because everyone was an artist of some kind under that same roof. Both of my grandparents were painters and my mom was an opera singer. When you’re raised in a house full of artists, everybody is very similar in that they’re very invested in their own creativity.

How did acting become your life passion? When did you first realize that it was something you could pursue?

I actually started acting and playing music at the same time when I was really young, but it’s difficult to pinpoint a definitive moment when I decided to pursue them. I knew fairly early on that I wanted to find an outlet where I felt comfortable expressing the deep emotions I didn’t feel comfortable expressing in my own personal life. I was drawn to the performing arts because it allows you to explore intricate feelings under the guise of being somebody else.

You were just 14 when you landed a starring role in Manny and Lo opposite Scarlett Johansson. How did that happen?

I had auditioned for this casting director, Ellen Parks, a year before Manny and Lo—it was my first audition and I didn’t get the job—and she had always remembered me. Ellen looked up my family in the phonebook and she basically told my mom that there was a part I might be really right for. When I first read the script, I was terrified because I didn’t like the prospect of being rejected if they didn’t like me for whatever reason. I was never an outgoing kid or necessarily drawn to the spotlight. I never partook in school plays because I dreaded things like that.

What would you say was the most significant thing that you took away from working on Manny and Lo?

It started my life down a path that I didn’t necessarily anticipate. I was always more certain that I would become a musician. The thing about acting is that it really takes you to a place where you can analyze the human experience. To be given a gift at 14 to become an actress where you’re forced to either sink or swim was invaluable to me. Manny and Lo was really the beginning of my conscious life in that way.

Do you still find it difficult putting yourself out there in front of the camera?

That’s what I had to learn to do and what I’ll continue to learn to do better from here on out. It’s hard to let yourself go in front of other people. It’s about not being afraid and allowing yourself to break in front of strangers, which I still find difficult.

What do you make of the choices that you’ve made thus far in your acting career?

The things that happen along the way always change your options when you’re an actor. I always aim to work on things that seem genuinely interesting to me. I was definitely limited in my choices before Boardwalk Empire came along. That show changed the quality of my options. I had done a lot of independent films for years, but I was still stuck in this weird limbo where you feel like you’re clearly part of the business, but you can’t move up—it’s a holding pattern. I’m also an adult now so that shifts a lot of things. When I was younger, the huge guiding force of what not to do was how embarrassing something might be for me. As an adult, and especially as a woman, you’re more in tune with the things you want said or represented through your work. I’m always on the lookout for roles that are written for a man that I can play as a woman. [Laughs] I don’t want to be the wife, the girlfriend or whatever. Women are so much more interesting than that.

Your role on Boardwalk Empire seems like the perfect example of the kind of roles you’re after. It’s my understanding that you knew little to nothing about Angela Darmody going in.

I knew that she had a young child and that her husband or boyfriend was just coming back from the war. That’s literally all I knew at the beginning. Once I was offered the part, they threw one more piece of information at me, which was that she’s a painter. When you have three pieces of information to go on, the amount of research you do for a character is massive. You’re looking for enough material to build this person with. I used the little things that I knew about Angela Darmody to understand what was happening during that time period for women and for society in general. Angela is a social feminist as opposed to a political one because she doesn’t care about the right to vote as much as she wants the right to vote in order to live a fulfilled life. That is so beyond to me and I love it. Voting, for her, is merely a symbol and she simply wants the actual freedom.

Did they provide you with a full character arc prior to filming or did everything come together gradually as the show went on?

It’s hard to say how much the writers knew going into it because they never told us anything. Everything was very episode-to-episode. We basically found out every couple of weeks what would happen without giving away too much. I guess some of the actors on the show knew more than others since their characters were based on real people, but I didn’t because my character was entirely fictional and that didn’t require much fact checking.

That must have been quite a burden off your shoulders since you’re not replicating a known person that lives in our collective consciousness.

Right? [Laughs] I read a lot of scripts based on real people and always get cold feet about taking on those projects because it’s not just an emotional interpretation—it’s a physical one. Some actors are very transformative by nature and they can become this other human being, but I feel like I’m better at working from the inside out.

What are some of the downsides to television? The security is there for obvious reasons, but you’re bound to playing this single character for however long they want you for.

I always worry about doing TV for those reasons, but that’s also the sliding benefits. You don’t really grow as a character on TV during the course of two or three years. I had never spent as much time exploring a character as I did on Boardwalk Empire. You spend so much time invested in this other reality that you begin to accept it after awhile. It’s a trip! [Laughs] It was a lot heavier than I could’ve imagined. A TV show has the possibility of going on for six years or more. It’s a total weaving of your life into this show’s life in a way. It pulls amazing things out of you, but then you’re suddenly on a hiatus and you don’t know what to do with yourself. It just becomes such a huge part of your life.

I know this is a really annoying question and I apologize, but how would you describe EXITMUSIC’s sound?

It’s like the question you get where your mind just goes completely blank. [Laughs] I just hate all the options out there. I don’t like descriptions like “shoegaze” or “female-fronted”. We get all kinds of stuff. I feel like our songs have more urgency than something like “shoegaze”. We don’t sing lullabies, so that word doesn’t feel right. I think if I had to classify my own music and feel good about it, I wouldn’t be making the kind of music that I want to make. There’s a lot of flavor in it.

Would it be fair to say that it’s brooding? It seems to me that you’re somewhat drawn to the dark side, both in film and music.

Could you expand on that?

I have this kind of heaviness that I don’t know how to get around. I don’t even know that I try to get around it anymore. The weight of being a human is the most breathtaking thing and the most horrific thing. I’m constantly trying to understand whether life is good or bad. Are people good or bad? Am I good or bad? I guess it’s both, always. The things that have made the biggest impressions on my life have always hurt coming in and shocked the system. I don’t know how to write songs about wanting to dance at a party. [Laughs] I guess I’m just a grumpy kid.