The Maccabees Go All The Way

London’s indie rocker Felix White on growing older, finding solace at KFC, and the band’s first No. 1 album Marks To Prove It. 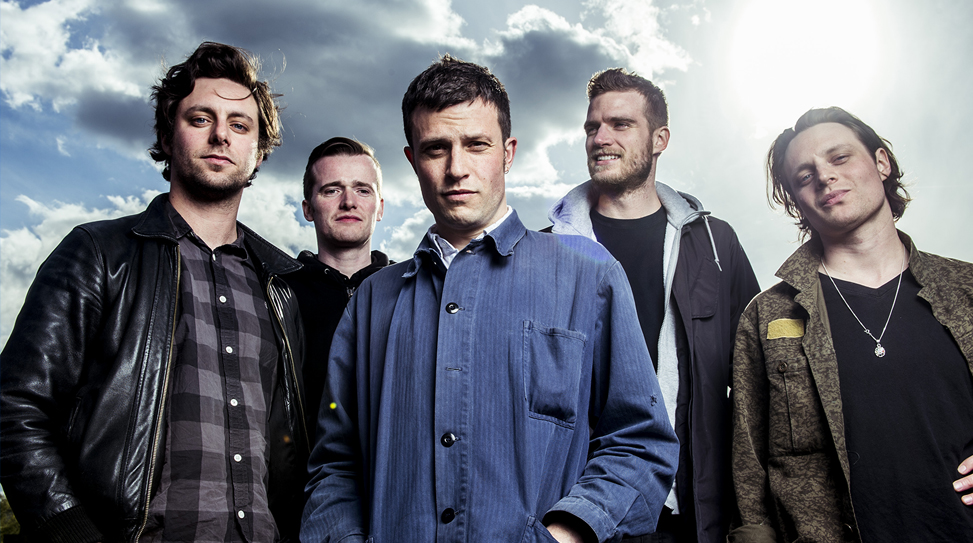 Touring can be quite tired and disorientating, and we had this one magic day in Kamakura where it was really beautiful.

The Maccabees’ Marks To Prove It is now available to purchase via Communion Records.

How does it feel to finally release something that you’d been working on for such a long time? Over two years in the making, right? That must be a strange feeling.

It’s been magic, really. It’s been really well-received. I don’t know… It feels like the stars were aligned for all the hard work we put into it in the last month or two. It feels good!

Do the previous records inform what comes next or is it a different process every time?

It’s definitely a different process. There’s a lot of relearning, we definitely had to relearn a few things. With the writing process, each record has been very different. As for the pressure—with every record we’ve had and as we become slightly more successful, whether that factors into it or not—I don’t really know. Every record was different from the last one. Honestly, if a record hadn’t gone well, that would’ve created pressure. We’ve kind of become more self-governed as we’ve gone on. We produced this record ourselves and we were more hands on with everything.

Was this the first time you guys had your own recording studio?

Well, technically, we had it for the last one with Rockfield Studios in Wales. We didn’t say this at the time, but the record didn’t really work out as much as we had hoped with the people who were producing it. We took a lot of the music back and rerecorded it ourselves in the studio. So we had kind of done it, we did some fixing. But for this one, we did it all ourselves.

With anything, there must’ve been moments of great joy when cool things are materializing and deep frustration when things aren’t coming together.

When it was difficult, you mean? The hardest part? For the first year or year and a half… There are a few things. Once you get off touring for a couple years, it’s quite a disorientating experience: trying to get into making a record again, not having worked out what we were trying to achieve, what it was going to be, what we were trying to say with the album, and even what the purpose of it was. We ended up being there every day, but it didn’t seem like we knew what we were doing. A year later, we realized that we didn’t have any new music, aesthetically related to each other. So that was a year and a half in when we were pretty exhausted and didn’t have any music. That’s normally when you kind of put things in order and decide that you’re going to write everything in the room, in the studio. If it doesn’t sound good in the room, it wasn’t going to be used.

When you’re not putting out new material for that long, do you get worried? It’s worth mentioning that some artists out there are overexposed.

The honest answer is that it is worrying. You’re not sure if people are going to remember. Of course it is—it’s worrying. But, at the end of the day, you’re making a record and it’s a privilege to be making a record. The only thing, in your head and everyone’s head, is wanting it to be special. If it’s not special, then what’s the point of turning it out? That’s the situation we found ourselves in. That’s why it feels good now because, between us, we all know and do so much editing and talking about it. By the time the record is out, we genuinely know what we think of it and there’s a solidarity around that. There’s a depth in the details with the record.

Do you record something like “Marks To Prove It” and immediately know it’s a single?

Honestly, the singles have ended up being the three most uptempo songs on the record. “Marks To Prove It” was the first single because it felt a little bit more flippant than anything we had done. There was something nice about having spent so long making the record and having the temptation to make something that is kind of eccentric. It was like a reset button to start the process again.

This is obviously a cyclical thing with albums because we identify with different songs at different times, but my favorite track is “Kamakura” at the moment.

What’s the story behind that one?

Touring can be quite tired and disorientating, and we had this one magic day in Kamakura where it was really beautiful. It was one of those days where everyone’s happy and there’s an ease to it. It kind of inspired the music to do similar things. That’s what the chord progressions and the basis of that music is. It was one of those things that we couldn’t find context for, but Orlando’s lyrics were about picking time apart and observing the situation. Like in High Street, England, it’s the opposite thing from what the music is about. That’s kind of what gave “Kamakura” its identity.

It’s a beautiful track. I’ve been listening to that song while traveling around Japan and the energy is very in tune with the place. I can see where you guys are coming from.

Do you have a favorite track off the new album?

I really liked recording “Dawn Chorus” because I had the chord progression for awhile. It was one of the songs that we were going to do before, but we never recorded it and there was a window where we said, ‘Can we try it?’ It happened super quick and we just did it. That was the first take of the vocals and the bass was improvised, whereas the rest of the album has a lot of detail, introspection, and trial and error in it. It genuinely did come together within a few hours. That experience makes it fresh in my ears, you know what I mean?

What happens to the scrapped or partial recordings? Are they gone forever?

Well, the little riffs or chords that didn’t make the last album found a place on this one. You always have that stuff, you know? It’s hard because there’s so much music that you’re proud of and you’re trying to filter it through five people’s opinions. Obviously, there’s a lot of music that you love that doesn’t quite make it into The Maccabees.

And what’s it like to have your brother Hugo [White] in the band with you?

Hugo and I learned how to play guitar together in my bedroom. We literally couldn’t play at all. We’re still crap at playing lead guitar or solos or anything like that, really. We never learned any of the technical stuff. But what that has given us is a very specific kind of sound—The Maccabees sound, I suppose. When you’ve been together for ten years, there’s a very specific way that you play. It’s some sort of a coincidence or magic that makes a band work.

I bet there are compromises at every turn when you’re in a band.

There’s a conversation about everything. It can be a diplomatic process. I can’t even tell you.

How do twentysomething guys spend so much time together and not want to kill each other?

[Laughs] That’s the story, isn’t it? But that’s what I think is cool about bands. It’s different people pulling together for this one thing, something bigger than all of them. There’s something magic about that, I think. I think that’s what makes it interesting.

What do you think is really difficult about being on tour that people don’t realize?

It’s more challenging now because I’m 30 and we’re at that kind of age, whereas ten years ago, it used to be about being in a place for the first time, with no common goal other than just to see this new town and see new things. We’ve kind of been everywhere now. Now, everyone has a different thing they’ve worked up and what they enjoy about being in the band, which is slightly different from each other. So it’s about finding that common purpose, which can be quite difficult. If you’re traveling on a bus all the time, it’s quite difficult to be comfortable because there’s no way to be on your own. There’s no privacy to it, so that’s a constant battle, really, to find your own space.

I just read this interview you did the other day where you were talking about KFC. You go to KFC to get away? That was my big takeaway from the article. Isn’t it awful?

I guess you could always go to KFC.

Had the record gone badly, I would’ve gone to KFC and come back. That sounds like depression.

You’re off to Kraków next?

You guys played in Poland before, right?

Yeah, but not for ages.The crowds in Poland are really incredible.

Can you sightsee when you’re on this run and gun lifestyle?

You normally have soundcheck and an hour to kill before you play a gig. Then you move onto wherever next. It doesn’t end up being like sightseeing, really. If you’re in a place like Australia, you get a bit of that because of the big distance between places. It tends to be that we see similar things every night in different towns.

I hate to ask you this, but what’s next?

I think it’s just about celebrating the record and playing it. It’s about living in the moment, as it were. We’ll think about that later.