The multi-hyphenate reflects on his Metal Work sculptures, the laissez-faire life of an artist and finding community. 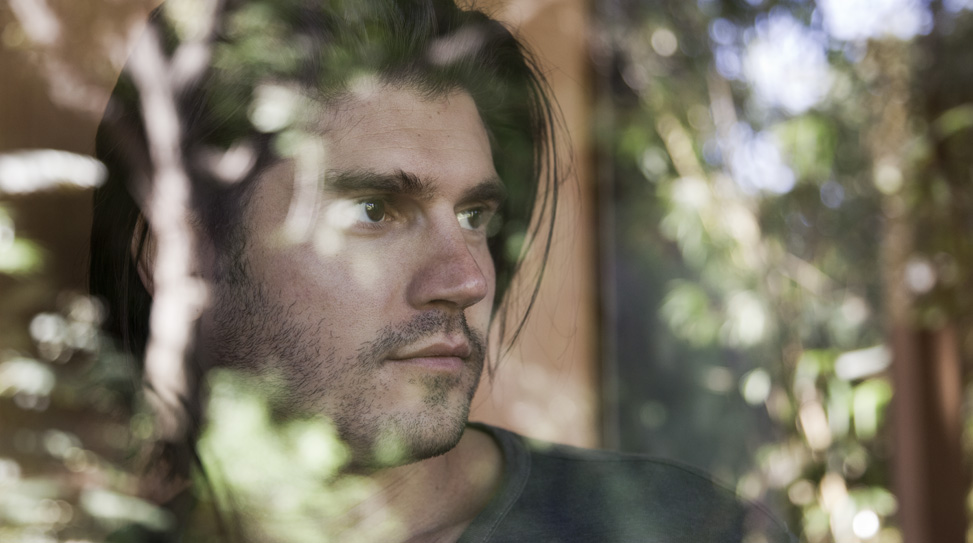 It’s one of those perfect afternoons in Los Angeles, the day as crisp and bright as summer lemonade. A slight breeze rustles through Andrew Levitas’ Laurel Canyon patio. The mixed-media artist has a cigarette, the requisite accessory of a dreamer, in hand.

“For me life is about creating,” the 34 year-old native New Yorker says, blowing smoke into his hand-planted garden. Levitas paints, sculpts, writes, acts and directs. But at his home/studio his mixed-media work is his most transparent passion. His elusive paintings—as big as the brand new Porsche in the driveway—decorate his living room. Sculptures of skull icons mark the entrance to a tidy kitchen, and Levitas’ signature Metal Work photography hangs throughout his palatial dwelling.

“I’ve created this photography technology called Metal Work and essentially I shoot images and develop them on to custom materials,” Levitas says. “Then I melt them at a very low temperature onto hand-etched pieces of aluminum.”

The result is a raw-edged, handmade piece of art that serves as more of a wall sculpture than photography. Using a welder to manipulate the reflective material, Levitas’ sculptures play with light and movement. The mirror-like quality is intentional. Levitas wants the art to literally reflect its owner and its surroundings.

One of the centerpieces in his living room is a staggering image of a wildebeest herd in Kenya captured charging up a hill. Alone the image is beautiful, but with the Metal Work technique the artwork looks alive.

“Standing here looking at it you should hear the hooves pounding, and feel the heat in the air—feel the movement. I think that my process brings that out, or at least I hope it does,” Levitas says.

And in this afternoon sunlight it does; follow the wildebeests as you shift across the room and they move towards you, appearing almost three-dimensional.

On Levitas’ kitchen table Metal Work sculptures the size of a notebook are made with hollow grooves so that the work can stack together like two upright puzzle pieces. The sculptures feature haunting images of a skeleton-littered catacomb in Rome. According to the artist, his Metal Work is one of the few archival photographic processes that can be outside.

“Imagine the sculptures at a big size and they are really something to be seen. Blow them up and they have a certain impact. This is where my work is going,” Levitas says.

It is not difficult to imagine sculptures twice his size gracing the lawns of the likes of MOCA. Already his work has been featured in a solo show in the Hamptons, the Museum of Art and Design in New York, the Chelsea Art Museum, Art Basel Miami, and—perhaps his most joyous occasion to date—the Société Nationale des Beaux-Arts at the Louve in Paris.

Levitas’ presence is calm, his voice is deep and soft, and his hair is the stuff of romance novels. Which was no doubt an attribute that contributed to his Los Angeles beginnings. He moved to L.A. in 1998 after landing a role in the soap opera As the World Turns. For over a decade, Levitas has been in dozens of films and TV shows but he always returns to creating visual art.

Film has maintained its influence in Levitas life. He has his own production company, named after his photography technology, and he co-produced the recently released film The Art of Getting By starring Emma Roberts. Several scenes include artwork from Levitas’ own studio. In the fall, he plans to direct a screenplay he wrote.

There’s no trace of New York cynicism in Levitas demeanor, which could be credited to the perfect day, the incredible house and—again—his impressive crop of hair. But Levitas is the first to admit he has a lot to be grateful for.

“I think the hardest thing in life is not to feel part of something, and to not understand where you belong,” the artist reflects. The multi-hyphenate creative says that he has been fortunate to discover a creative community and be surrounded by mentors and family that support and inspire him.

“At the end of the day the reward is putting the paint brush down on the canvas—the money comes and goes—but the act of painting stays.”