The formidable Spanish actress takes on her greatest challenge to date in Pedro Almodóvar’s hotly anticipated film The Skin I Live In. 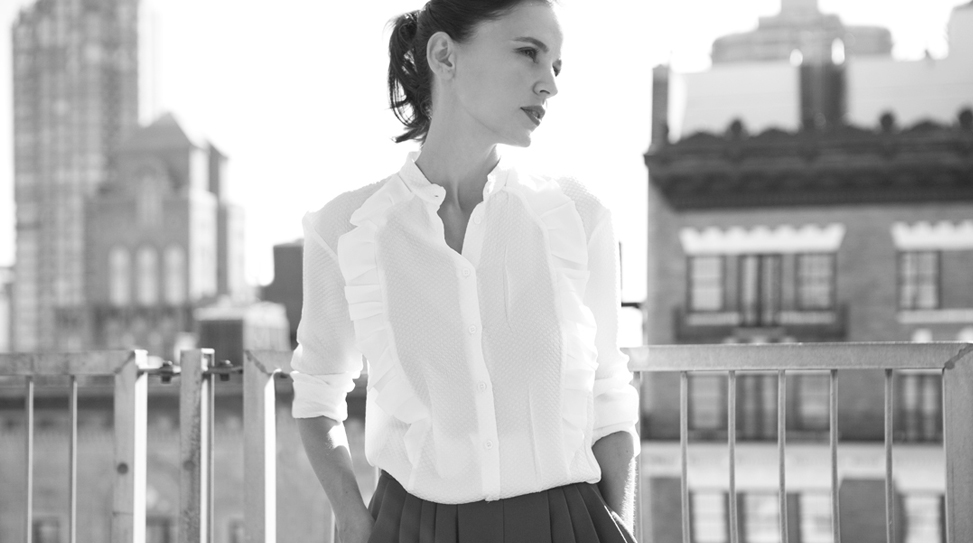 When a director chances on an actress as beautiful and enormously talented as Elena Anaya, you know there’s one thing they always commit to doing: throw her into a firey pit and see if she can crawl out of it. The 36-year-old Spanish actress first blipped on our radar following her memorable performance in Sex and Lucia. Since then, she has played everything from a bloodthirsty harpy in Van Helsing to the wife of a famed French gangster opposite Vincent Cassel in Mesrine. In Pedro Almodóvar’s The Skin I Live In—freely adapted from the novel Tarantula by Thierry Jonquet—Anaya is Vera, a victim of wrongful imprisonment. And a vasectomy…

The brilliance of Almodóvar’s latest offering hinges on a single twist—we’ll keep that to ourselves—so here’s a general synopsis supplied by Sony Pictures Classics:

Ever since his wife was burned in a car crash, Dr. Robert Ledgard (Antonio Banderas), an eminent plastic surgeon, has been interested in creating a new skin with which he could have saved her. After twelve years, he manages to cultivate a skin that is a real shield against every assault. In addition to years of study and experimentation, Robert needed three more things: no scruples, an accomplice, and a human guinea pig. Scruples were never a problem. Marilia, the woman who looked after him from the day he was born, is his most faithful accomplice. And as for the human guinea pig…

The Skin I Live In is now playing in select theaters.

It was an intoxicating way of growing up. I played a lot, as kids tend to do, but I feel embarrassed now because I’m still playing make-believe as a grownup actress. I always wanted to tell stories. I wanted to make people feel deep emotions through the projects that I’m involved with as an actress. When I was little, my mother was my best acting coach and she allowed me to be the person that I always wanted to be. She was willing to let me explore that world. I asked my parents if I could pursue acting and they told me, ‘Go for it! Work will consume your life so you should do something that makes you happy.’

Did you study acting formally or sort of dive right into it?

I studied acting at a summer school in Cadiz, which is located in the south of Spain. My grandparents used to live there and now my mother lives there. I attended these classes with an amazing actor who’s widely known in Spain and he taught at the school. He made me realize that I want to act for the rest of my life. I was still in school when I got a call to audition for a film called Sex and Lucia in Madrid. They ended up casting me and everything happened very quickly.

Sex and Lucia was a huge turning point for you.

It definitely happened with Sex and Lucia. I think the turning point comes when you make a film that makes people want to watch it. People started paying attention to me when that came out and that opened up a lot of opportunities.

In terms of my international career, I really don’t know… I just took the calls. I don’t know why or how this happened. When I got cast in Mesrine, I didn’t speak a word of French. But I did it anyway. I did a play in Iceland, in Icelandic. There are things that you have to do as an actress that you wouldn’t normally do. You have to be tough. There’s no safety net.

What sort of roles are you normally attracted to?

When I choose a project, I don’t just think about the character that I would be playing. That’s not the most important thing for me. The most important thing is the story. I want to work on films that I myself want to watch. Sometimes I choose the project, and other times, the project chooses me. Sometimes a script comes across the table and it’s all about intuition. There are times when a script feels perfect as if it was meant just for you. I don’t like to ask myself why things happen. I just try to remain open-minded and alert. All I can do is try to stay on a smart path. I want to share my experiences as a human through the characters I play and grow as a person with each new role. What do you call the stars that go really fast?

Yeah! I don’t want my career to be like that.

How would you describe the relationship between actors and directors?

Every new film is like a new painting—it’s a blank canvas. Every director gives you a new experience. You have to follow the directors and go wherever he or she wants to take you. When actors work with directors, it’s like steering a ship. You’re constantly asking, “Where is this current taking us?” If everyone on the crew is heading toward a different destination, nothing good can come of it. Actors need to follow the directors. Always.

What is it like to work with Pedro [Almodóvar]?

It feels like I tasted the forbidden apple. [Laughs] I now know what it’s like to be directed by Pedro. I’ll never forget this experience. You go hand-in-hand with Pedro throughout the whole production. I first worked with Pedro on Talk to Her. The same Pedro directed me then, nothing has changed. He gives his entire life to his work and he keeps going until he gets what he wants. He’s extremely precise about everything, but in a good way. He knew everything about The Skin I Live In. He had been living with the characters for ten years! When he introduced me to my character, it was as if she was my sister that he had been living with for ten years. He knew exactly who Vera was and he knew exactly what he wanted from me. That made things very easy for me. We also rehearsed for two months and that really helped a lot. I was with Pedro every day. It felt like we belonged to the same family.

What did these rehearsals entail?

We did a mix of everything. We went through the script many times and worked on specific scenes. It was important to make sure that we were all heading in the same direction. When Pedro asks you to do something in a scene and then changes his mind about it a day later, it tells me that he really knows what he wants. We talked in-depth about why this film is important. We talked about life and science. How far can science go? In the future, will we have the power to choose our own skin color, the very thing that separates us? We already live in a world where we can alter almost anything. We have so many laces—

Layers! Thank you. We have so many layers that we can alter, and yet, we can never alter our identity. The identity of Kee or Elena—that’s impossible to change. The Skin I Live In is a powerful story about how a surgeon takes advantage of this poor guy to get revenge. He’s trying to replicate his wife who never loved him. It’s like creating a Frankenstein monster!

So no romantic comedies in your future, huh?

[Laughs] I do prefer these kinds of movies. I have a weird sense of humor anyway. I love to laugh, but it doesn’t come easily. I don’t want to choose projects based on genres. I don’t say, “I want to do comedy!” and go looking for something. I want to be a part of good films. I want to make films that people want to watch. It’s true that I feel more comfortable making darker films, but I also appreciate lighter films that aren’t easy comedies. I want to make films that stay with you and make you think. Watching films purely for entertainment is good, but that’s not what I’m after. When you sit in a dark theater for two hours with no other distractions, you really listen to the story and believe that story. When a film delivers a powerful message, it adds something special to your life. This is why I make movies and watch movies.

What did you take away from working on The Skin I Live In?

This film means so much to me. I learned a lot by playing Vera. I don’t think I need to explain the reasons why. This was such a beautiful and complex role, you know? She taught me how to be strong. Vera’s a survivor. Sometimes you’re born that way, but we all have a lot of room for improvement, right? She goes through a lot of tough situations, but she pushes through it. Her values in life made me think about her behavior and why she does what she does in the film. I won’t give anything away…

I’m reading screenplays. I need to finish this little trip, which is now almost over. It feels like I’m finally coming back to earth. It has been a long journey making the film and doing press. I’m looking forward to acting again and not giving so many interviews. [Laughs]