Austin Sherbanenko, the Los Angeles-based designer behind Odyn Vovk, has a way with dark and mysterious fashion. His obliquely handsome garments, which sure-footedly teeter between the bespoke and the readymade, are imbued with the perfect combination of underground flavor and a stamp of minimalism. What’s more, the Autumn/Winter 2010 collection showcases the budding designer’s irreverent […] 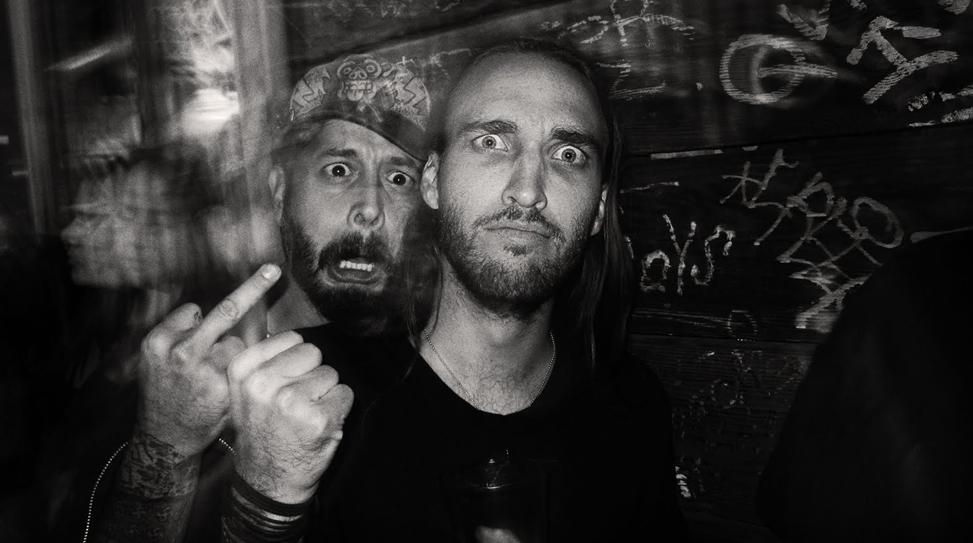 Austin Sherbanenko, the Los Angeles-based designer behind Odyn Vovk, has a way with dark and mysterious fashion. His obliquely handsome garments, which sure-footedly teeter between the bespoke and the readymade, are imbued with the perfect combination of underground flavor and a stamp of minimalism. What’s more, the Autumn/Winter 2010 collection showcases the budding designer’s irreverent take on sartorial staples—exaggerated collars, hand-dyed leather jackets and reversed balloon pants—not to mention other entirely wearable clothes that both inspire and open the wallets of men who are self-assured and quality-obsessed.

Fueled by his rebellious nature as much as his unyielding ambitions, Sherbanenko sums up the case for going as far as your imagination will take you in order to push the elastic boundaries of fashion in a meaningful way. And this viewpoint certainly stands him in good stead; Odyn Vovk is fast becoming one of the most exciting new voices in fashion.

I’m so taken by Odyn Vovk. I recall first stumbling onto your clothes and thinking, “If I could somehow sneak into his studio, I would ransack the place.”

[Laughs] I love hearing things like that. It makes what I do worthwhile.

There’s a lot of drama in your clothes, but without ever veering into an outlandish place where costumes live, which is something I really admire about your style. Do you find it difficult treading that line at all?

Well, thank you. I design what I imagine. Of course, there are a few showpieces that I do for the wow factor, but the rest is my fine line between fantasy and reality. There are a few pieces that I’ve done in the past that for sure made me step back and say, “Shit, no one’s gonna get it…” and I had to move on, but that’s just the way it is. I follow my gut instinct 100% of the time.

How would you sum up your overall style as a designer?

I don’t know what I would call my style. I really just go with the flow of my imagination. It’s more of a day-to-day execution with a direction in the beginning of a season. One day I’ll design a super slim fitting jacket and the next I’ll do a piece that’s a baggy over-exaggerated wool coat.

I’m curious as to what your mood board looks like…

It’s dirty! No, it’s filled with tons of swatches and sketches for quite sometime until I start to edit it down during the first few sample designs. I can then get a feel for the direction I want to take the collection for the season.

Odyn Vovk is still very much a budding brand, not to mention budding extremely fast. Looking back on your own start in the industry, how important would you say the first collection is for a given designer?

Well of course if you flop your first season, people will remember that. I had a bit of that fear going into it, but to be honest, I was so confident that failing wasn’t an option. There will always be people that want to say negative things and beat you down, but you just have to keep following your vision and ignore ignorance.

Your Spring/Summer 2010 collection is called “Confined Translation.” How did that come about?

It all came together after the collection was finished. I was so focused and was so strict on the direction that it just became about everything I was confined to. For example, being in a studio 24/7—I lived it.

For that collection, you included a lot of capes, coats, hoodies, blacks, and layered looks. Were you worried that people might criticize you considering that this is a Spring/Summer collection?

A lot of the layered pieces were light. Spring shows are typically boring due to it being summer time and people only wearing jeans and a shirt. The shows are more for fun to me. The playfulness and the layering are to show everything; there are tons of options.

I saw photos of you wearing a Darkthrone t-shirt at that show. How does metal play into all of this?

I just like listening to black metal; it’s like nothing else. It keeps me on a good edge and sane. It motivates me to keep going and not slow down, like the music!

I loved your collaboration with Black Sheep and Prodigal Sons—a perfect pairing in my book. How did you hook up with Derrick Cruz?

We met through a mutual friend about 3 years ago. I had always loved his work and aesthetic. When Derrick came to the AW2009 runway show, he walked to the back right when the show was over and came up to me and said, “Dude, we’re doing something together. Collaborating. Something. Now. Soon!” So for the next season, we collaborated on a few pieces using my materials and some of his. We bounced ideas off of one another for a few months. It turned out to be perfect.

Was this your first collaboration with another designer?

Yes, this was my first time working with another designer. But I wouldn’t call it an official collaboration. We’re good friends that appreciate each other’s visions. This was a perfect opportunity for the both of us to put our heads together and make something amazing. The way he thinks and puts concepts together into accessories is an art form. There’s so much thought that goes into what he does. It was an honor he even came to me for some inspiration.

I understand that Odyn Vovk means “one wolf” in Ukrainian. What kind of significance does this bare on your label?

As you might have read already, my family on my father’s side is Ukrainian and during their solid lifetime, they had to go through a lot of turmoil and hardship to survive. During Nazi Germany, my grandfather carried his whole family through a very difficult time and, in a sense, he was the one wolf—wolf meaning power through wisdom and strength through knowledge. He had to go through so much and was forced to survive with what they were given. Through my father, I was taught that I had to fend for myself and go through life in a cunning way. I guess in a nutshell, I relate to being the “one wolf” and of course, Odyn Vovk means exactly that in Ukrainian. Doing whatever I have to do to survive and make it in this fucked up industry!

Well, let’s talk about the industry. You’re obviously based in Los Angeles and we don’t really have a fashion scene out here. How does that affect you as a designer?

I don’t know that it affects me in any way. I was born and raised here, but have traveled the world and in my lifetime have seen many things; very fortunately, of course. I know L.A. has a bad rap about designers and whatever it is, but it’s where I live and I take full advantage of my resources in Downtown L.A. Being in L.A. is great for me actually because it’s not drowning in fashion. I don’t really like going to NY or Paris for its fashion and seeing what’s out there. I’m allowed to be in the slum and follow my own thoughts without any distractions.

What about current fashion trends? Do you follow them if not to inform your own aesthetic, but just to be aware of what’s going on?

Yes and no. I’m well aware of what goes on around me. From a business stand point, I watch what people do with their company or how they brand themselves… and it’s pretty funny to be honest. There are so many brands and designers out there that have almost no control over what goes on and I find it crazy. I know one day that I’ll need to expand and reach out, but I’ll never lose touch of my own brand. As far as current trends, I see what people are wearing when I go out and it gives me a good idea of what’s going on.

Are you targeting your clothes to anyone specific? Is there perhaps a niche audience that you’re hoping to tap into?

I don’t really have a specific “target.” I have a picture of a guy in my head wearing my clothing, but no specific target. If someone loves my pieces and is confidant in wearing great things, so be it. Most of the people that like my stuff are into the construction and fit of my garments.

Fair enough. Let me ask you this then: what do you think might excite you more, seeing some punk kid walking down the street wearing your clothes or having some Hollywood star put Odyn Vovk on the map?

[Laughs] For sure a punk ass kid walking down the street. Actually, I’ll never forget the first time I saw someone wearing one my pieces when I was in Tokyo. He walked right beside me, my heart sank and my jaw just dropped. The feeling was one of the best I’ve ever felt. The American Idol incident happened after that… We won’t even go there!

Oh, come on! Can we go there a little? I have no idea what you’re talking about by the way…

Shit. Without sounding like a complete asshole, someone let a stylist freely “borrow” one of my one-of-a-kind pieces without my consent. It was the alligator vest to be exact. I was told it was purchased and I had no problem. So, when I found out that they were just borrowing it and returned it, I was livid. You don’t take my shit and just hand it out like candy. I could care less about seeing my shit on TV. I don’t want to sound mad or angry because it’s over and sold now, but I was so pissed at the time. Now it terribly stands in the Hard Rock Hotel in San Diego where it’s collecting dust!

I’m sorry to hear that. We’ll turn to something else… Would it be safe for me to assume that your favorite color is black?

This is true, but I introduced some color to the upcoming Autumn/Winter 2010 collection. Black is still the dominant color though.

What is it about black specifically that you’re interested in?

I find black to define my aesthetic and myself the best. I can also appreciate how you can see details on a black jacket. I find that anyone can design a black garment, but few people make it count.

What else can we look forward to with your Autumn/Winter collection?

At the present moment, where do you think you get most of your support from and what kind of hurdles have you come across to get to where you are now?

The strongest support system is for sure from my friends and family. And Japan!
Hurdles… This industry is a constant rollercoaster. I can’t even think about all the things I have had to overcome.

Sorry to bring up a sore subject again, but how are you coping with the recession? Has it affected your creative process at all?

Hmm… How many times have I answered this question this year? [Laughs] Yes and no. I never let my creative power out of my hands. There has never been one instance where I’ve been choosing my fabrics for a collection and said to myself “Hmm… Let’s not do this one and go with something less expensive, no one will know.” I’ve always gone with what I find best, never a substitute. On the other hand, I have found ways to combine fabrics to bring costs down.