For one reason or another, underground electronic music has seen a lot of activity in the darker realms as of late. From the controversial blog-propelled, youngster-approved microgenres “grave rave” and “witch house” to the second coming of icy minimal synth music, it’s very clear that, at least for now, the kids want their Goth jams. […] 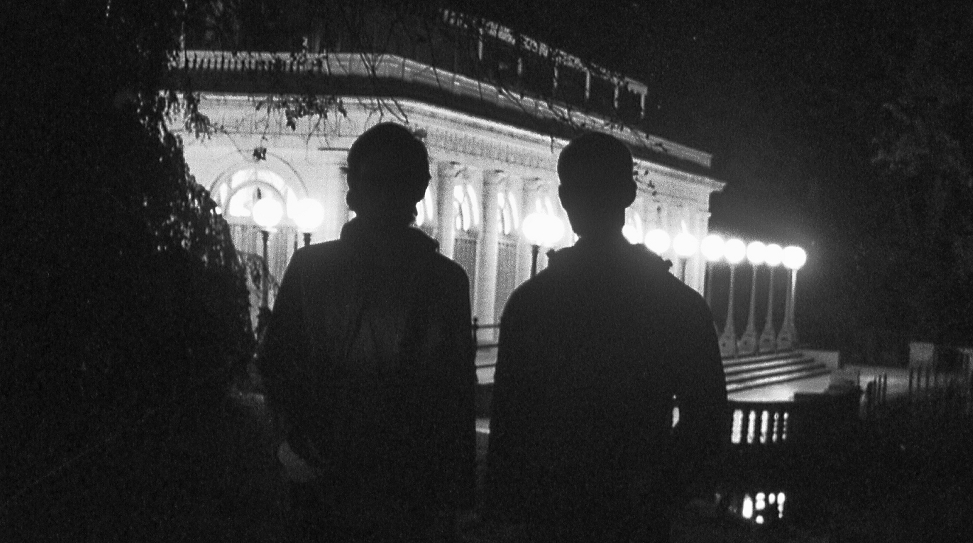 For one reason or another, underground electronic music has seen a lot of activity in the darker realms as of late. From the controversial blog-propelled, youngster-approved microgenres “grave rave” and “witch house” to the second coming of icy minimal synth music, it’s very clear that, at least for now, the kids want their Goth jams.

Gatekeeper is perhaps the first act of this wave, if not most notable, to draw a large following not only from the younger art school set but also from the old school techno/goth/disco purist/curmudgeon league. This is because Gatekeeper has done their homework. While their arpeggiator-driven, epic synth compositions very much reflect the architects of vintage horror and sci-fi scores (Goblin, Carpenter, Vangelis), their tendency towards violent drum samples and bizarre effects give them a product that is easily digested by fans of early Warp and Detroit techno.

Imagine (or YouTube) the opening child sacrifice scene in Beastmaster. Simultaneously bright and dark, disturbing, vintage psychedelica that you can either laugh off or immerse yourself in. There you have Giza, their latest and six track release, which is as captivatingly evil in headphones as it is on the dancefloor. Serious stoners might want to spring for the VHS accompaniment put out by visual cohorts Thunder Horse Video.

Who knows. These cycles tend to come and go, spinning irrelevantly one way or another. Seems like dark music came into popularity in part because of the times we live in, but mostly because summery-bedroom-slumber-party-feel-good music hit its saturation point and it seems natural to respond with the exact opposite.

What instruments/effects are imperative to your sound?

What is your relationship with Thunder Horse?

Thunder Horse are our old friends from Chicago, we began collaborating in 2009 when they saw our weak attempt at stage effects and offered to do a much better job. They moved to NYC a few months before we did, and being here it has been collaboration zones pretty non-stop… They set up FX for all of our NYC shows and we worked together on the Giza HDVHS, a collection of six music videos to accompany our most recent EP.

A lot of your works are very cinematic in nature, is there a narrative?

Not specifically, we like the ambiguity of cinematic music that seems like its telling a story but the actual details are filled in by the listener, like a broken choose-your-own-adventure scenario. When we work on a video, obviously we have to consider specific narratives, but even then we feel like we are choosing one of possibly infinite directions to take the song visually… its hard for us to commit to one narrative! We like to leave it up to the listener.

What should one expect from Gatekeeper’s live set?

Ideally, something somewhere between the opening blood-rave scene in Blade and a Las Vegas magic show.

How would you describe your DJ set?

An eclectic mix of our spur-of-the-moment inspirations, anything from early Warp records & Detroit techno to switched-on library grooves to screwed EBM. Lots of verb.

What pre-established scenes are you getting the most love from?

Hard to say. We’ve kind of always been mostly for nerds, but those “communities” you mentioned seem to appreciate some element of what we do and have been pretty supportive.

You guys recently moved to NYC from Chicago, how’s that working out for you?

Chicago is an amazing place but the move to New York has been really good for us, we fell into a community of peers and have had some great opportunities for shows, tours, collaborations, etc.

Vintage horror movies seem to be a reoccuring theme within your work, any favorites? Favorite soundtracks?

The horror movie inspiration (Carpenter and Goblin soundtracks) was strongest in our earliest work, Optimus Maximus. With Giza and our newer music, we’ve been looking more towards science fiction and fantasy soundtracks…

What other bands/producers would you recommend for fans of Gatekeeper?