In which we discuss the distinctly non-Swedish feeling of being an indie musician in Sweden, performing live for the first time, and the band’s incredible debut LP, An Album by Korallreven. 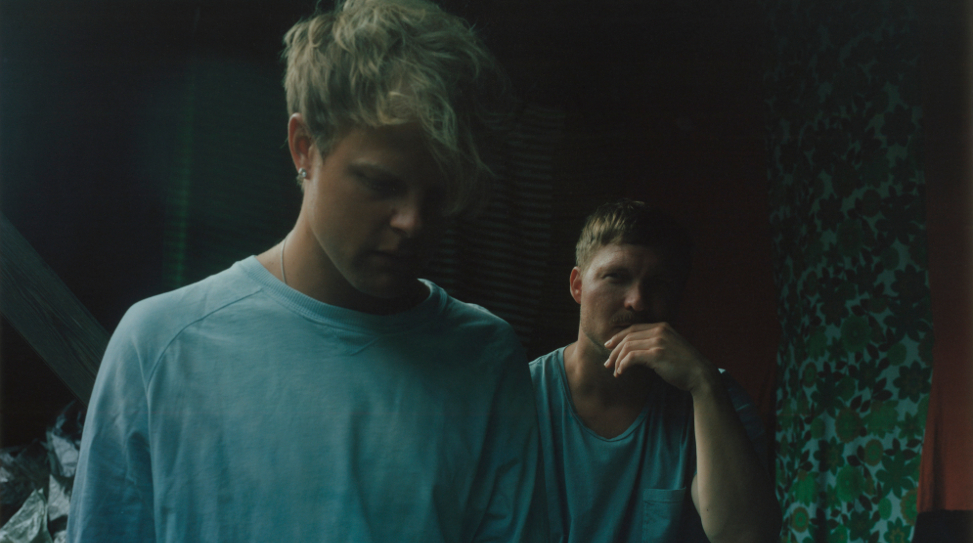 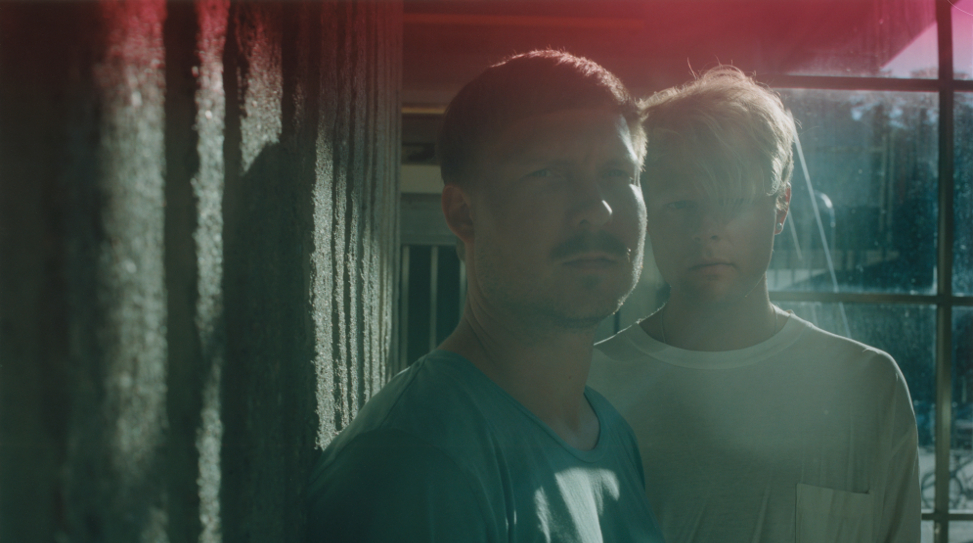 Ever since releasing their debut single, “Loved-Up,” on Service, one of the labels most representative of today’s Swedish sound, Marcus Joons and Daniel Tjäder―together known as Korallreven―have been making waves in the world of indie pop. Now, over two years after that first 7″ came out, the duo have put out an album’s worth of their infectious South Pacific-inspired, beachy pop music. You can get the LP on Acéphale―the label that was also behind “Honey Mine” and “As Young As Yesterday”―now!

Anthem spoke with Joons, the original founding member of the group, over Sykpe last week while he was in Stockholm, practicing and preparing for their first live appearance ever.

Alright, so let’s begin at the beginning! Tell me about how you formed. I understand it was originally just you.

Yeah, it started with me, but I’m not really a musician―I’m more of an ideas [person]. I got this idea when I came back from Samoa―I was living in Australia at the time and had always wanted to go to the South Pacific. So I went and found some ideas and figured out some concepts for new music in my mind. But I don’t play any instruments; I just sing. Daniel [Tjäder] is a good musician, though, as well as a really good friend… so I told him about my vision and he thought it was interesting and challenging. So, one day, when we were playing soccer in Stockholm, we decided to go to his house and started [working on] the album, actually. It evolved with singles… when a single was finished, we released it.

Cool. So, when you were in the South Pacific, were you hanging out with musicians and stuff, or was it just being in that world and a part of it all that inspired you?

It was very much about just being there. There’s not that much music, at least not in the sense of having a scene. Like, they play when you eat in restaurants… or there are nice choirs at Catholic churches. That sort of thing. It’s like the weirdest place on Earth, I think. It’s another world.

Why were you living in Australia before that?

I just felt like I always wanted to go there. And, at the time, I felt a bit lost. Like, there’s a big world out there that you want to be a part of and you don’t just want to be a Swedish countrysider living in Stockholm. You feel so isolated. But, after [going to Australia], it was as though the world opened.

Living in New York, I’m still surprised at how many Swedes there are… it seems like a lot of you like to get away from your homeland!

So, going back to the band, what, exactly, does Daniel do and what’s his background?

Well, his background is that he’s always played music… and he also used to be a journalist. Actually, he went in to interview the Radio Dept. and they said they needed a keyboard player. He told that he was one and then he joined. But that was a long time ago―2003 or something. So he was in that band and, otherwise, he was sort of floating around. Like me. [Laughs] But he’d never made something fully or really produced something. I think it sort of became 3D when I pushed him to [join Korallreven].

Out of curiosity, what does your name mean?

When you started working on the singles, did you have the album in mind, or were you just, like, casually making one thing after the other?

No, we had it very much in mind, the full album. We got a lot of ideas at the same time when we started and felt like we had a structure to work with. And we wanted the whole thing to be like a cycle, so, like… the album starts with those cola beans and it ends with them, too. So that’s sort of [symbolic of] life. Also relationships… you start really happy and then you come down in the end. Also like a trip, being on funny stuff. [Laughs] So, yeah, there were three or four of these cyclical themes from the onset.

How did you hook up with Acéphale for your releases? I’ve known the owner, Patrik North, for years, and he used to send whatever music he was getting from you. So how do you meet?

We never met, actually. He just reached out very early. We’d only released one single―”Loved-Up” on Service―and he asked if we had anymore song. I lied and said we did. [Laughs] So then we sped up the recording process. Anyway, I moved to New York last year and he moved to New York as well so we hung out a lot. He feels like he’s really part of the team… he always has great ideas and is very smart and might be one of the few people I actually like to talk to about music.

Moving back to the album, how did you get Victoria Bergsman and Julianna Barwick to lend you their vocals?

Victoria is a very close friend and has been for several years. I played her our tracks very early on and she was in-between albums so [she was available to sing]. She’s so professional, too: she would just come around, do two takes, and be done.

[As for] Julianna, last summer, I was really, really down and looking for music that would take me away from everything, all the trouble and problems. I felt like her music really helped… it made me not think of anything anymore; it’s like medicine. I just met her at one her shows at Littlefield in South Brooklyn.

Well, both of them fit perfectly with your aesthetic and the instrumentals.

I also think it’s nice to go away from that, like, two-boys-standing-on-stage thing.

This might not be the most eloquent way to phrase my question, but what do you find good and bad about working in Sweden? Uplifting and frustrating? The music scene there seems so small and insular.

It’s quite interesting. The bands that you like―maybe jj or Air France or something like that―they’re not that popular over here. The same thing goes for us, I think, and there seems to be a very different view of [us and what we do] in the States. I don’t know, though… there’s not that much connection. Sometimes, I don’t even feel like a Swedish band. All the people we work with―like Patrik, who’s been there since the beginning―live in London or New York.

You just stick to your stuff and don’t really have the time to be updated with everyone else’s stuff. But I think it’s always like that, isn’t it? Have you been to Sweden, by the way?

Not in a long time.

Well, I think that Williamsburg is one of the few places that is what you expect it to be in that sense. It’s very, very music-focused. Here, we don’t really have record stores anymore and people are more interested in fashion than anything else.

It’s weird because until the Tough Alliance’s cover of the Lucky Twice song came out a few years ago, I never really thought about the fact that Sweden probably has some sort of a mainstream pop scene. But I guess there’s just normal European pop being made there―

But the stuff that we see is just the cool stuff, like you―

Right. [Laughs] Or the Sincerely Your stuff or jj or whatever. We have no idea as to what, like, teenage girls in Stockholm listen to.

They listen to the Swedish version of Bruce Springstein. There’s a lot of bands that are carbon copies of their favorite mojo bands.

Alright, so what’s your studio setup and what was the process of making the singles and the album like?

We recorded a lot in Daniel’s apartment, so if you listen to the vocals only, you can hear stuff like a car driving by the window. Luckily, that disappears when all the instruments are added in, though. So, it’s very D.I.Y. in that sense, but we also used a studio and the guy who mixed the LP in the end was the same person who worked with the Hives when Timbaland produced them. We really wanted to sound good despite our limited means or ways.

It sounds like a very full, properly engineered record!

At the moment, I’m listening to a lot of dancehall that I got in Jamaica when I was there this summer. And maybe you can track down the [more specific] influences for one track, but… we actually don’t really talk about music [in such terms]. Like, “Let’s do a Cure song now” or, “Let’s do an Nguzunguzu thing now.” It’s more about what just happens. Often, I guess we’ll start with a melody and then ask ourselves what we can do with it that makes it quite far away from what you imagine it to be. Like, for example, “Keep Your Eyes Shut”―the fourth track on the album―we have this loopy chorus thing and then we add some Mexican mariachi stuff on top of it. We thought about what was far off from mariachi and thought some trance seemed right. We keep trying to find new ways to mix very classical stuff with very sketchy stuff.

On that note, you’ve been in so many different environments over the past few years―do you think it obviously affects the sound of your music? How you make your music?

Maybe, but I don’t think so. A lot of the songs―like “Honey Mine” and “As Young As Yesterday”―were recorded in New York City in the summer, when Daniel was over. It was [really hot] then. A lot of people [suggest that environment changes sound], but I don’t really see that. All I hear are instruments… some synths or some guitars. It’s just that people are used to “summer music” sounding a particular way.

Finally, outside of the tour, what does the future hold for you guys?

Well, right now, we’re talking with U.S. booking agents about a tour that might happen. Spring or summer―we’ll see. We’ve got some European dates before that and we’re also playing in the Philippines and Indonesia. And there’s a new single coming―we’re doing an extended version of “Sa Sa Samoa.” And in January, I think we’ll start recording a new album!