Anthem sat down with the French starlet to discuss her latest film, Love Crime. 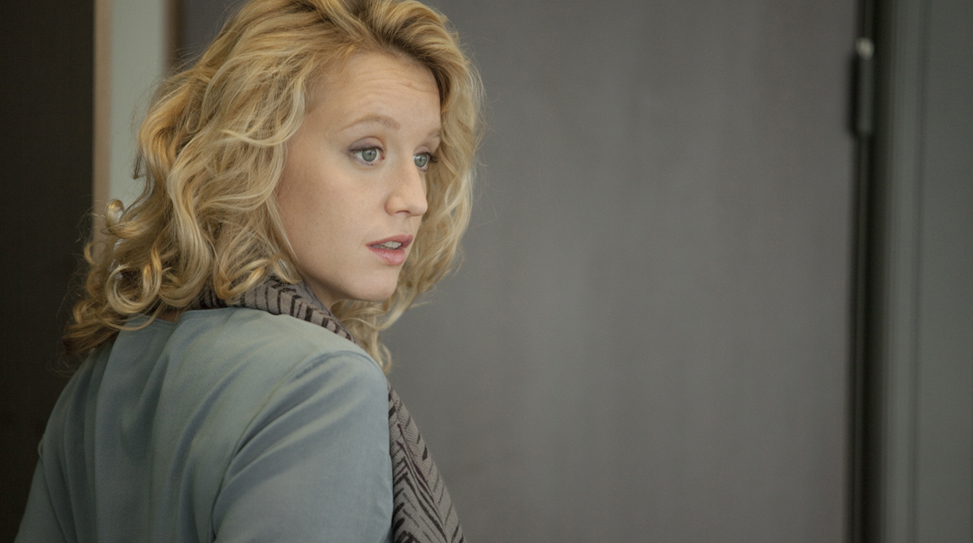 As far as sultry French starlets go, 32-year-old Ludivine Sagnier comes as advertised. Seductive, clever, sensual, and often at the center of a torrid love triangle, the three-time César Award-nominee first bared her soul to American audiences as a sexed up ingénue in François Ozon’s Swimming Pool. Her wide-eyed enthusiasm and fragile sexuality will be on display again this Friday in Alain Corneau’s Love Crime in which she plays a meek financial executive at a multinational company who engages in a deadly psychosexual battle with her ruthless mentor (played by Kristin Scott Thomas).

Sagnier sat down with Anthem at the 6 Columbus Hotel in New York to discuss her latest film, Love Crime.

What made you want to become an actress?

It just happened. I didn’t really plan it. I went to an audition with my sister who wanted to be an actress. I was waiting for her in the corridor and when the casting director saw me, he asked me to audition. It just happened like that. It took me a long time to figure out that I could actually do that as a job.

The characters that you’ve taken on have been very different from film-to-film. Is that a conscious choice that you make?

Definitely. I like contrast. Actors are so dependent on the will of directors that the only way we can be creators is to chase down interesting characters and build a gallery of portraits. I think the more varied the portraits are, the more interesting your exhibit is.

What attracted to your role of Isabelle in Love Crime?

She’s just so far from me. This woman is so introverted. She’s secluded in her loneliness and obsession. She doesn’t know how to enjoy life. She just enjoys what she’s been taught to do, which is strategizing and thinking about marketing and stuff like that. She’s completely naïve when it comes to human relationships. She’s just so far from me; she’s so cold. I thought that if I started to dig into that kind of psychological profile, I would sharpen my way of seeing a human soul in general.

Do you perhaps know anyone in your personal life that happens to be a workaholic or as high-strung as your character is in the film? Was there anyone that you referenced when you were building this character?

I can’t think of anyone in particular, but I remember when I was younger, some of my friends were in very prestigious universities and they were working all the time. They would go to the library and just study finance, finance, finance. One of my friends didn’t even know where his kettle was. [Laughs] He couldn’t even make himself a cup of tea in his apartment. He spent all of his time doing the most complicated mathematics and then all of a sudden, the simplest things were completely out of his reach. I worked on this kind of contrast with Isabelle. She falls into the trap because she has absolutely no weapon, no shield to defend herself with. All she knows is how to work! Other than that, she’s completely immature. She doesn’t have any friends. Socially, she’s at zero. I was drawn to that part of this character.

From your reading of Isabelle, what’s her driving force in life? Is it money, success or this delusional pursuit of being the perfect person?

I definitely think the obsession with the idea of perfection and excellence. At the same time, it seems that people who are obsessed with perfection or excellence are fleeing something. I imagined her as being someone who might be trying to escape some sort of a tough family complex. That was one of the motivations. If it weren’t for something like that, I don’t think she would’ve been capable committing that sort of a crime. Otherwise, she would’ve been able to distance herself and deal with it in a different way. She’s so weak that she doesn’t know how to deal with it any other way.

There’s that scene where she’s going to bed and it’s almost like a ritual. She looks completely stiff with her arms stretched out above the covers by her side like she’s lying in a coffin.

Yeah! I remember shooting that scene and not being able to understand this kind of behavior. I said to Alain [Corneau], “Why do you want me to sleep like that? No one actually sleeps like that!” And you know what he answered? ‘I do.’ [Laughs] Alain shared some similarities with this character. He likes the idea of perfection and striving to have nothing out of place. For example, he said that when he sleeps at night, he didn’t want to see any fold on his blanket. I was like, “Why?” Suddenly, it opened my eyes and I thought, “Oh, there are people who really think like this.” For him, eating and sleeping is a waste of time, and he thinks it’s completely normal.

I used to have a very mild form of obsessive-compulsive disorder when I was young and I totally connected with your character on that level. I think Alain came from a very genuine place.

I think Isabelle is very credible to a lot of people. At the beginning I thought some of the choices that Alain made for my character seemed like it was too much, but looking back, they weren’t at all.

What’s your personal take on your relationship with Kristin Scott Thomas’ character? It’s somewhat ambiguous whether this sexual chemistry is real or purely born out of manipulation.

I think Isabelle admires Christine completely and she also envies her for many different reasons, maybe because she’s a socialite and she doesn’t allow Isabelle to be her equal. Maybe Isabelle envies Christine for her social abilities and her work ethic. I think envy and jealousy can somehow be related to desire. Since Isabelle is completely immature in life, I don’t think she herself really knows how she feels about Christine. It might be unconscious love and unconscious desire. Maybe that’s why she kills Christine, because she would never dare think that she might have those kinds of sexual feelings for her. It’s simply too far from who she is. It could be love, but it’s still too blurry to say either way.

What was the most challenging part about making this film?

We started shooting all of Kristin’s scenes first, so she was there for the first three weeks and then she left, and I was on my own after that. That was very challenging because I was all alone and, usually, being an actor, your job is to listen to and play off of another actor. The loneliness that I had to go through was really painful to carry sometimes.

Most people in the States know you from Swimming Pool. What was it like stepping into an entirely English-speaking role with that one?

It was difficult, but, at the same time, she wasn’t supposed to be a native English speaker, so I didn’t have to work on the accent. I was quite young at the time, so I didn’t care about much, actually. [Laughs] It was great, though. It was very intimate and I had a feeling that François [Ozon] was handing me a gift. I couldn’t have anticipated that the movie would’ve exploded like it did when we were making it. I still meet Hollywood movie stars who say, ‘You’re the girl from Swimming Pool!’ It was seven years ago, but they still remember me from that. It’s a very big privilege to be recognized like that for one character that you played. It really stuck in people’s minds.

How would you compare the film industry in the US with that of France? Is it remarkably different?

The American film industry is obviously huge. There are both good and bad things about it like anything else. But what I like is the huge variety of projects in America. I’m a big fan of American movies and American directors. I prefer movies that are completely controlled by the directors and writers. I like low-budget indie movies and I’m also a big fan of things like Avatar and Inception. I think the American film industry is full of resources, but it might not be the center of the world because there’s strong work coming out of places like South America, Japan and South Korea. I’m enjoying where I’m at right now because I’m in the middle of all of this. I want to work in as many different environments as possible. I’m of course aiming for the US market because it’s full of opportunities, though. I’m looking forward to having more freedom as an actress than trying to work in any specific territory. Just to be able to bounce from one environment to another one is amazing. I like the move. The ability to move is the real freedom, that’s the real thrill for me. That’s the real glory.

I just finished a musical with Catherine Deneuve with the director of Love Songs, Christophe Honoré. We’re hoping that it’s going to be at Cannes this year.

Les Bien-Aimés, which means “the beloved.” There’s other stuff happening that I’m not allowed to talk about yet.