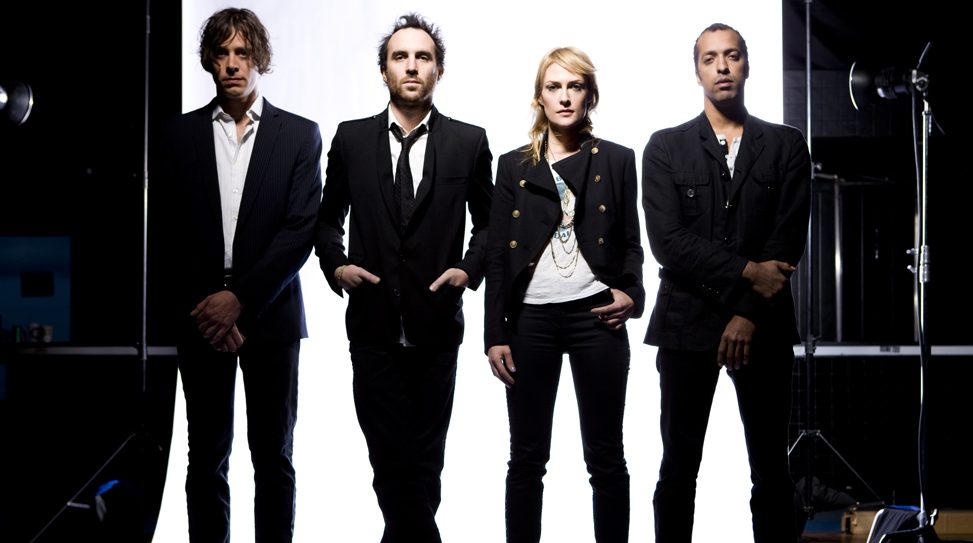 With Metric’s much-anticipated new album, Fantasies, the Canadian quartet continues their ongoing love affair with jovial hooks (the Pro-One keyboard is in full effect here) and lyrics laced with healthy doses of irony that boast an equal mix of fire and vulnerability. On standout tracks “Help, I’m Alive,” “Gimme Sympathy,” and “Stadium Love,” we find the band shining at their brightest and most beautiful.

Metric is hitting the road this month to promote their new album, which is scheduled to drop on April 14. You can preorder Fantasies over here and receive two exclusive tracks: a cover of Pink Floyd’s “Nobody Home” and an acoustic version of “Gimme Sympathy.”

Front woman Emily Haines shares with Anthem the secrets to her songwriting process, the strangest thing to have occurred at one of their incendiary live shows, and the five songs that would go on her mix tape.

How do you go about writing lyrics and forming word combinations? What were the circumstances that lead you to writing the lyrics for “Help, I’m Alive,” for instance?

It’s a mysterious process. Writing lyrics for me involves a lot of sneaking around pretending I’m not writing. I can’t stand the feeling of consciously thinking, “Here I am, Emily from Metric, writing a song.” I go to great lengths to avoid that feeling. That’s how I found myself chasing a Steinway piano all the way to Argentina and writing “Help I’m Alive” in someone else’s apartment in Buenos Aires. It takes real concrete experiences for me to want to write, and I don’t mean experiences like hanging out backstage or living on a tour bus. I mean experiences where something unknown is happening, and something is at stake. It gets me into a lot of sketchy situations, but in the end, I always get the song.

Metric is still very much attached to the idea of making albums, not just collections of songs. I know not everybody chooses to listen to music that way, and that’s fine by me, but I feel like we have to create an album, assuming that at least some people will listen to it from beginning to end if it is cohesive enough. So our final decisions always depend on how the songs fit together. We had a feeling all along that “Black Sheep” was the beginning of our next record and that it didn’t belong on Fantasies. Then weirdly out of the blue we got a call from filmmaker Edgar Wright saying he wanted us to work on music for his new film. When we played him “Black Sheep,” it was perfect. So “Black Sheep” found it’s home in his movie and we will probably release it when the film comes out. In the meantime, we still play it live all the time. As for “Joyride,” we never felt like it really clicked live and we couldn’t get it to sound right on tape. The arrangement was kind of clunky and we didn’t feel like spending a lot of energy turning the song into something else. It’s actually really surprising to me that so many people are asking about it. When we played it live I didn’t get the sense that the audience was that into it. The song is not gone or forgotten. I know the right treatment will emerge when the time is right.

The limited edition package you put together for the new release is really awesome. Everything is digital now… I much prefer music having a tangible quality—a physical presence in the form of records and collectibles. Is this the first time you guys put together an exclusive set like this?

Yeah, it’s the first time we did anything like this and I got really into putting it together. I think a lot of listeners still want to hold the music in their hands. I feel like the advent of CDs and the dreaded plastic “jewel case” really cheapened music as a physical product. Seriously, “jewel case”? What a piece of marketing genius that is. Always looked like a crappy piece of plastic to me and those little tabs on the front always broke off. Luckily, somebody came up with the much-less-sexy sounding “digipack,” which is at least made of paper and allows for some artwork to happen. For Fantasies, we modeled the limited edition deluxe CD on the artwork I did for my solo album, Knives Don’t Have Your Back. We made it like a hardcover book. We did a slight variation on the artwork for the vinyl too and I designed a poster composed of candid photos of the band as well as a series of images from a Buenos Aires street art collective called “Hollywood in Cambodia.” There are other special things included too. I put a lot of love into it.

There seems to be rewrites and revisions going on in a lot of your songs that vary from performance to performance. Do you find yourself reevaluating your original intentions or are the songs evolving organically over time?

We made a conscious decision before we started recording Fantasies that we were going to road test songs and include our audience in the writing process. The sad fact is that for most bands the requirements of the music business mean that you have to schizophrenically separate writing and recording from touring. Once you release a song on an album, you create a definitive version and you’re going to have to play it that way for the rest of your life. This made sense in the old days when rock and roll musicians toured the songs first then released singles and then put all those singles on an album. For us, it would be ridiculous not to try out early drafts of the songs live. You learn so much about a song just by playing it for an audience. Like with “Gimme Sympathy,” the song started as an acoustic track with a tempo change in the middle. We liked the song, but it was pretty weird and we weren’t able to pinpoint what wasn’t working. Then I wrote this whole extra section about being “a guest in the kingdom of doom,” which was more like another song grafted on and then when we played it live for some reason it sounded like alt-country and I felt like Shania Twain all of a sudden. It’s sometimes hard to predict how things will translate, and tape is a very different medium than live. In the end we went back to the original version minus the tempo change. Bands and songwriters go through crazy amounts of revision—you’d be surprised. They just don’t let anybody in on it.

I think it’s difficult to disown something that you create—in almost any creative pursuit—once it’s released into the public sphere. It’s so easy to want to distance yourself from something when you start thinking about the things you would have done differently. Is this something you worry about at all?

No, if I worried about that I would lose it. It’s part of the reason why we keep our whole process as a band transparent. There is nothing to hide; it is all part of the music. It cracks me up thinking back, the things I’ve said on stage that I shouldn’t have, songs that speak to a different time in my life. But what are we supposed to do, be born at our destination? The only conceivable purpose to living is to embark on an adventure and see where it takes you; see what you find out. Music isn’t one way; it’s a dialogue. And everybody listening is changing too.

Can you recall the strangest or most unexpected thing you’ve witnessed in the audience while you were performing?

Somebody crowd surfed to the front of the stage with their baby, like a two year old, and put the kid on the stage at my feet. I was really confused and so was the kid. He just stood there in the center of the stage with his eyes really wide and his mouth gaping open. It’s hard to understand the thinking of the parent in this situation. We basically stopped the show and the whole crowd and the band and everybody was just collectively asking, “What the fuck?” Then his Dad reached up from the dance floor and grabbed him and they were off. The Dad looked like a nice enough guy but I was a bit concerned about the little boy. He wasn’t even wearing earplugs!

What sort of things normally runs through your mind when you’re on stage?

When I’m playing music it’s one time my noisy mind shuts up. It’s a deep focus and I have to always be one step ahead of myself because technically there is a lot that I have to do up there. Every transition is timed and every moment counts. I love to experiment with the spaces between the songs, and we always try to keep them part of the music. Of course I have the occasional, “Wow this crowd is going off” or “I’m sweating like a wrestler” thought go through my head, but it’s rare. We always joke that when we’re on stage we’re all thinking about picking up our dry cleaning.

I had the pleasure of seeing you guys perform live at Coachella last year. You were comparing your volatile Pro-One keyboard to an emotional woman. I would think it makes for an interesting dynamic—it’s not just sitting there as a soulless object waiting to be summoned. It has a mind of its own.

Yes! There is a force field between me and my instrument. She’s serious.

Your solo album, Knives Don’t Have Your Back, was really beautiful. “Doctor Blind” in particular resonated with me and the music video you made with Jaron Albertin (who also directed “Our Hell” and Metric’s “Empty”) was haunting and cinematic. Is the visual-audio pairing that music videos afford important to you?

Yeah, we’ve been really lucky to be able to work with some great directors despite our limited budget. I like to think of videos as short films with our song as the soundtrack. Either that or as some sort of cinematic challenge. Frank Borin directed our video for “Gimme Sympathy” and the whole video is one shot, no cuts. We rehearsed it about 10 times before we started shooting, and we ended up using our first take. It was such a great feeling being able to watch the video at the end of the day instead of the usual process of waiting around for weeks for edits and tweaks. Instant gratification.

If you somehow chanced on an individual who had never before been exposed to music in their lifetime—a completely blank slate—what five songs would you put on his or her mix tape? I like hypothetical scenarios…