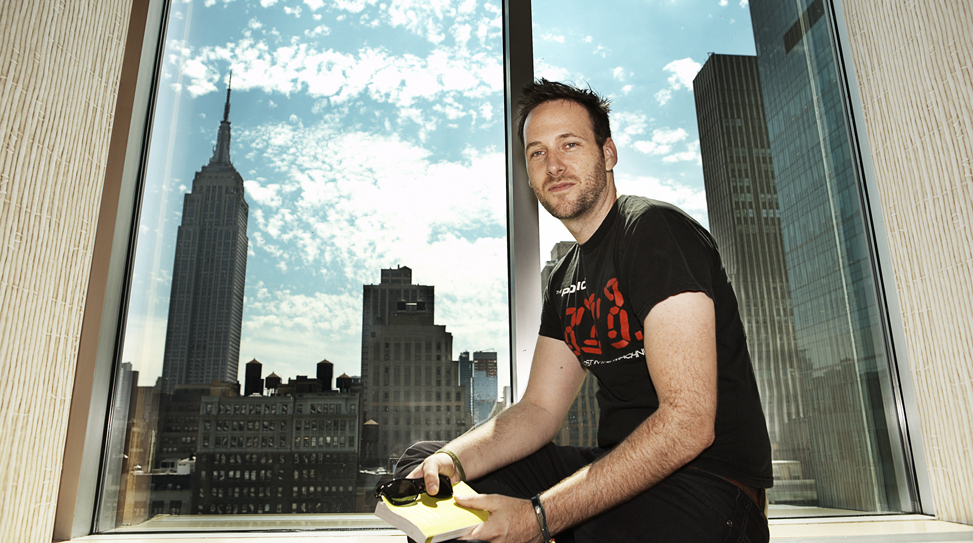 Most actors aren’t afforded a breakout year, let alone so early on in their career. Many who have them don’t survive them. And while the jury is still out on whether newcomer Ryan O’Nan is the real deal or not—all signs seem to point to yes.

For a lot of under-the-radar actors of O’Nan’s caliber out there, snagging a lead role in a high-profile feature—in this instance, starring opposite the likes of America Ferrera and Melissa Leo—is an unmitigated dream come true. After appearing in a string of modest indie flicks while juggling bit roles on network television, the gifted 28-year-old O’Nan got his foot in the door (somewhat serendipitously, as you’ll go onto read) with Ryan Piers Williams’ The Dry Land in which he plays James, an Iraq veteran confronting the realities of his Post-Traumatic Stress Disorder.

The Dry Land gets its limited release this Friday in New York, Los Angeles and Dallas, followed by a national rollout beginning August 13.

How does an unknown actor go onto land the leading role in a high-profile project like The Dry Land?

This is what happened and it’s all related to poker: I was shooting a film called Watching TV with the Red Chinese, and one time, the camera broke down and there was nothing to do. I remember this production assistant who was always super quiet and thought, “What’s up with that guy? Why doesn’t he talk?” So, I decided, “This is the day I talk to him.” We wound up having this amazing conversation and it turns out that he had come back from like 3 tours in Iraq. I hadn’t talked to anybody who’d come back from the Iraq war prior to that. It was very eye opening.

That night, I went to this poker game at a mutual friend’s place and sat down at the only open seat, which was right next to Ryan [Piers Williams] and America [Ferrera]. I didn’t know them at all, but they apparently knew me because Jeanne McCarthy, the casting director, had recommended me to them. I ended up having this amazing conversation with them about the project and Ryan sent me the script later that night. We met the next day and he offered me the role.

Did you have to audition?

No, there wasn’t any audition for it. I got pretty lucky.

That seems unheard of. How did you prepare for this role?

Ryan was an amazing leader. He fought for authenticity at every turn. I was fortunate enough to get a chance to talk with so many soldiers from all different backgrounds, be it soldiers who had come back with posttraumatic stress disorder, soldiers who came back without it, and soldiers who were about to go. One of my best friends was getting ready to go to Afghanistan at the time, actually. You just take all that stuff and process it through your own experiences, thoughts, and feelings. I did a lot of research prior to [shooting].

Can you recall any stories that resonated with you or any particular soldier who seemed extra damaged by war?

There was a lot of stuff. There’s a soldier who I talked to when we spent some time training together at the National Guard in New Mexico. He was telling me how his best friend had been killed the day before he was to come home—he said this with a straight face. He had served several tours. Now, he’s in the National Guard and about to go over again. He told me that whenever his daughters would blow dry their hair, the dead hair caught in the blow dryer would smell like burning hair, which would trigger all these emotions—simple things like that that you wouldn’t think could affect someone on a daily basis.

Yeah. I’m just an actor, man. I wanted to do this story justice and be as honest as possible because the film has a chance to be this thing that would start a conversation that needs to be had. The fact that more guys have come back from the war and have committed suicide compared to those who have actually died in the war is staggering. And people don’t know that. The only way to heal is to talk about it, and hopefully, this film lends itself to that.

Do you think that’s why the U.S. Army and the Department of Defense provided so much support, knowledge, and resources to this project?

Definitely. The thing that I responded to most in the script from the very beginning was the fact that it has no political agenda. I mean, all art is political to a certain extent, but this film doesn’t have an agenda—it’s not trying to make you think a certain way. It’s saying, “This is a guy and his journey.” It’s not saying, “This is how everybody comes back.” The stuff that these guys go through is fucking crazy. It’s surreal and hard to fathom. I just did a USO tour over in Iraq and when you see these guys, they’re just like you and me. They have bandages wrapped around them and they’re having fun. There are no politics involved, they’re just protecting each other. It bonds them in such a strong way that they’ll probably never bond to anybody else like that for the rest of their lives. And when they come back, none of them have each other. They all go back to their respective towns and they no longer have that support system. They don’t have anybody to understand what they went through.

That’s one of the big plot points in the film. When James comes back from Iraq, he starts clashing Michael, sometimes very violently.

And this is something that all the soldiers talk about. There’s no one who can piss you off more than the best friend that you had before you left for war. Michael is the one that asks all the fucked up questions about war that you should never ask. He thinks he still has that relationship with James, but, truth be told, something has fundamentally changed. James might look the same, but his perspective on life and the way he relates to others have shifted.

I always wonder how a human being could ever overcome something so traumatic, having seen the horrors of war. It’s like asking someone to swallow the sun. I don’t mean to go off-topic here, but I recently spoke to Samuel Maoz, the director of Lebanon.

I love that movie!

He told me that he could still recall the smell of burning flesh from when he served in the Israeli army in 1982. He was just 20-years-old when he killed a man and he struggles with it to this day. It’s so frightening to hear that.

It’s crazy because we grow up being taught not to play with guns, you’re not suppose to point guns at anybody. You’re not even supposed to point your finger at anyone because it’s rude. War totally flips that where not only do you have to point a gun, but there’s a chance you might have to end somebody’s life. Then, you have to deal with the consequence of that—that person has a family, that person is a human being. You do it because you have to and you’re protecting the people next to you, but, at the same time, how could that not shift you on a mental level?

Was James very emotionally draining for you to play? Once you got into character, did you find it difficult getting out of it once the camera stopped rolling?

Truth be told, we had the most amazing cast. It was the best group of people I’d ever worked with. It felt like I was in school because I was learning from all these pros. We had so much fun on set. Since it was such a hard topic, we joked around a lot in-between takes. And since we’d done so much research, we knew we had each other’s backs and support when the cameras would start rolling. It wasn’t that hard, quite honestly. It’s not like I couldn’t shed that character’s skin at the end of the day. When the day was done, we would all hang out together, play poker, and just enjoy each other’s company.

I’m a huge fan of Melissa Leo myself. What was it like working with her?

It was a dream come true! She’s one of the best. She was so available and she is that character. It just makes your job as an actor so much easier because you just let her in; you just listen and respond to what she’s doing. She’ll take you to these amazing places. I have nothing but incredible things to say about her.

You’re definitely the newcomer among the bunch. Are you very careful about choosing projects right now? Do you ever worry that you might get typecast?

I just love acting. I also love writing and directing. My goal is to make cool stuff that I love with my close friends. I’m actually directing my first feature that I wrote next. A whole bunch of my friends are in it. Wilmer Valderrama is in it. Michael Weston is in it. Melissa Leo is doing a cameo. It’s a complete turn from The Dry Land. It’s a kind of coming-of-age comedy about two misfit musicians who tour from the east coast to the west coast. One guy plays acoustic guitar and sings, and the other guy plays these reprogrammed children’s instruments. I want to do stuff that are meaningful. As far as avoiding being typecast, I don’t know… I’m just doing my thing, I guess.