We Own the Night: Bar Centro 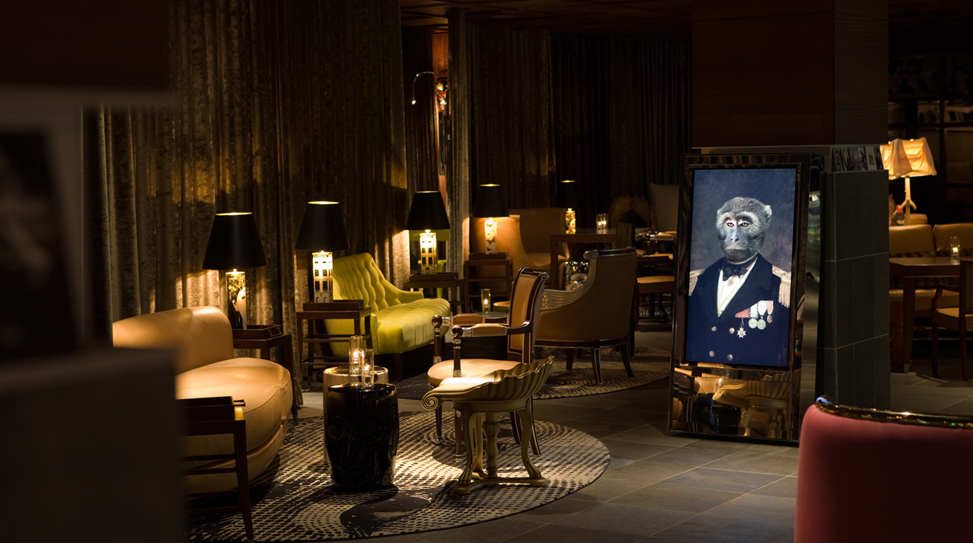 Inside the extravagant SLS Hotel in Beverly Hills, the collaboration between celebrity chef José Andrés, world renowned designer Philippe Starck, and retailers Murry Moss and Franklin Getchell is an eclectic undertaking to put it mildly. The four-headed monster that makes up The Bazaar are Rojo y Blanca, a play on the traditional Spanish tapa-teria; the Patisserie, a glass-encased pastry kitchen; Bar Centro, a central bar; and Moss, a “free-floating” emporium. The Bazaar encourages its guests to boundlessly dine, sip, lounge, and shop their way through wonderfully strange environments that bleed into one another quite seamlessly.

Upon entering The Bazaar, patrons will immediately come face-to-face with Bar Centro, the glorified food court’s mainstay. Set apart on its own by impeccable design accents, the surrealist décor proves a mix-and-match of furnishings from some of the world’s most elite design studios, as well as Starck’s own bespoke oddities like leaning LED displays featuring looped portraits of regal dukes morphing into monkeys—it’s all eye candy here.

Perhaps the most alcohol-laden area of the four pillars that keep this lavish sanctuary afloat, Bar Centro best reflects Andrés’ pioneering spirit. Widely credited for introducing both avant-garde and traditional Spanish fare (i.e. tapas) to America and, more famously, experimenting with molecular gastronomy in his vast culinary confections, the gastronome presents an intriguing assortment of specialty cocktails. The “Liquid Cherry” is just one of many masterstrokes, which blends whiskey with cherry “spherification”—the process of taking liquid and reshaping it into sustaining caviar-like pearls that burst at the touch of the tongue. Those seeking over-the-top spectacles on their night out are bound to find it in one of Andrés’ “Bazaar” experiments.