In which we discuss working with Optimo’s JD Twitch, Subway footlongs, and titling songs in Japanese. 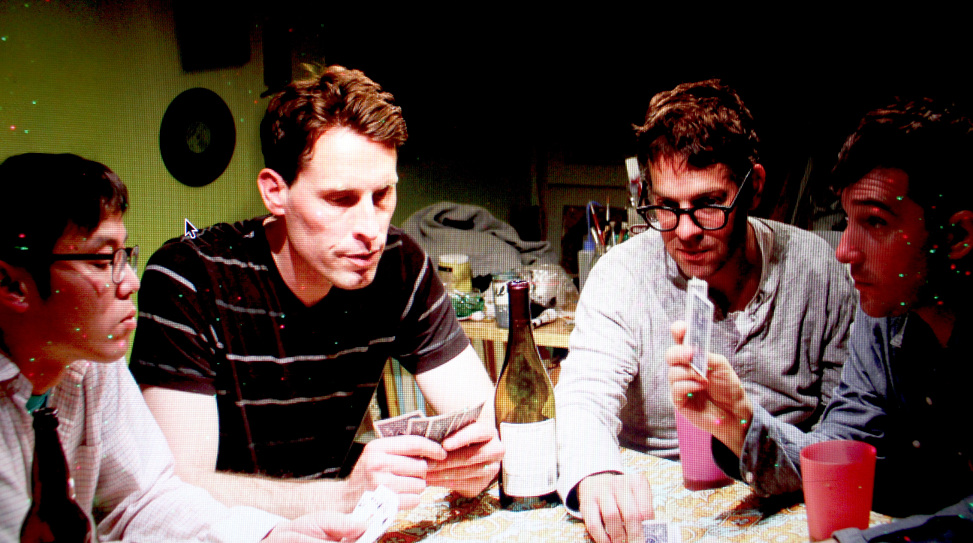 Since day one, we at Anthem HQ have been avid followers of Tussle’s. From back when they were a dubbed-out, leftfield, disco-obsessed oddity on Troubleman Unlimited to their more recent iteration as a Smalltown Supersound roster member. The San Francisco-based quartet has always kept us guessing and wanting more.

When it became known that Optimo’s JD Twitch had signed up to be their producer for the new LP, Tempest, we knew we’d be in for one hell of a ride.  The weathered DJ and producer simultaneously maintained the band’s stylistic roots while injecting it with a little extra dance floor-ready oomph.

In anticipation of the full-length, we caught up with frontman Nathan Burazer for our latest installment of Vital Stats.

What’s the newest piece of gear you acquired and what’s special or interesting about it?

My newest piece of gear is a Korg Monotron. It is the cutest little analog ribbon synthesizers ever made. It’s only five inches, but can get intense pretty fast.

What was the most memorable trip for you over the past year or so?

Venice, Italy. One of the most beautiful cities I have ever been to. It was our first time being picked up at the airport by boat; felt like James Bond.

What’s your favorite kind of food to eat when you’re at home?

I like a simple kale salad with avocado and grapefruit. On a cold San Francisco day, I like a bowl of homemade (from scratch) chicken dumpling soup.

And what about while on the road or touring?

On the road I survive on veggie footlong Subway sandwiches, Fritos, apples, and natures most perfectly designed food: bananas.

What was the most frustrating part of recording the new record?

The most frustrating part is how long an album takes from being done to being released. Often, by the time the album is released, eight months out, we are thinking about new things.

What did Optimo’s JD Twitch bring to the table? How did that affect the recording process?

JD Twitch had some great insights early on in the process; he was straightforward about what he wanted and could articulate clearly his vision for the album. After listening to the demos, he told us he thought I could sound more intense. He brought the intensity. Also, he brought some great performances; he was Tussle’s fifth member. JD Twitch has a fantastic ear for sampling; he also played synths and percussion throughout Tempest.

Tell us the story behind one of the song titles.

Earlier this year, Tomo [Yasuda] went to Japan to help clean up the damage done by the catastrophic earthquake and tsunami. Understandably, It was a huge trip for him to see the devastation with his own eyes. After he returned from Japan, we had to finalize song titles for Tempest. Tomo had the Japanese words “Yume No Mori” stuck in his head since his trip. “Yume No Mori” translates to English something like “Dream Village”. That nailed the vibe of the song pretty spot on.

What’s something you always carry with you?

And what are you most looking forward to as 2012 comes to a close?

Looking forward to casting my vote in November and the noise of the presidential campaign fading out.

When you’re not playing music, what do you like to do? Any hobbies?

I have a small design studio; it’s my little oasis. I enjoy sitting in there, looking through my books or making things. Since last year, I have been focused on making painting/collage hybrids inspired by WWF-era professional wrestling.